Ridesharing company Uber filed its IPO registration last week and the company is expected to raise $10 billion in the offering. That will make Uber’s IPO four times bigger than Lyft’s, which raised $2.3 billion last month. 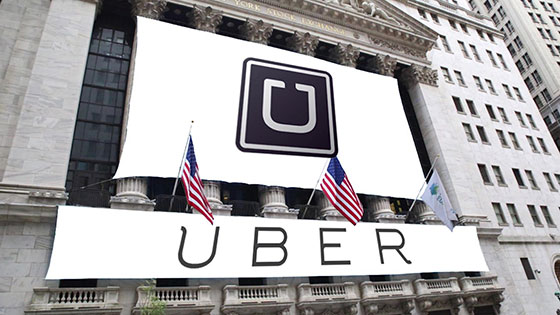 What’s more, Uber will likely be valued at more than $100 billion after its IPO – making it the 56th-most valuable company in the S&P 500 right out of the gate. For comparison, Lyft was valued at $24 billion immediately after its IPO.

That means Uber will be worth more than companies like UPS… Starbucks… American Express… and General Electric… to name a few.

Not many companies make it to $100 billion while private. Even Facebook didn’t make it there… It was valued at $81 billion immediately after its IPO.

So, Uber will go down in history as one of the most valuable public offerings in history.

And just like Lyft raised its IPO price at the last minute due to blistering demand, I expect Uber to be an equally hot commodity.

If you recall, Lyft initially said it would price its IPO in the $62-$68 per share range. But there was so much demand for the stock that Lyft bumped the price up to $72 per share less than 24 hours before the IPO closed… And they still sold out.

That’s a sign that the market is hungry for bleeding edge tech companies.

I wouldn’t be surprised to see Uber’s IPO price shoot up $5-$10 or more within 24 hours of the offering as large investors scramble to get in.

The IPO floodgates have opened…

As I have said before, there are hundreds of “digital first” tech companies ready to IPO in the near future. These are companies that were born in the ashes of the 2001 dot-com bust and remained private for a long time because of the flood of private capital into private technology companies.

Palantir… Pinterest… Slack… and Zoom… are just a few of the top tech companies that will IPO in the weeks and months to follow.

Collectively, the 2019 IPO boom is expected to set the record for total capital raised by U.S. IPOs in a single year… 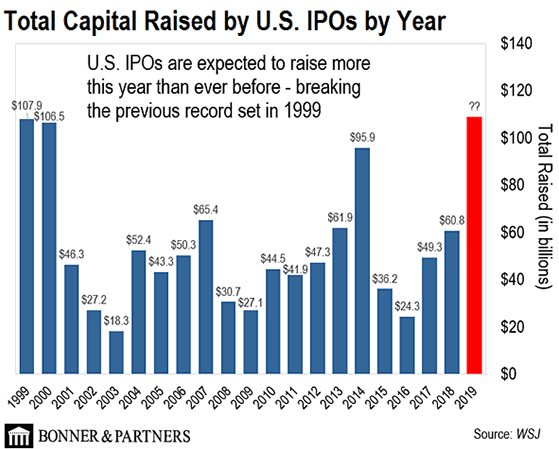 Ultimately, 2019 will be a banner year for tech IPOs. And that will give investors the chance to invest in the most exciting companies on the planet…

The million-dollar crash-landing on the moon…

This story may not have a direct investing insight tied to it… But it’s too good not to tell you about.

Back in 2007, Google teamed up with the X Prize Foundation – a nonprofit organization that finances innovative ideas and radical technology innovations – to launch a $30 million “moonshot” competition.

The competition was simple: The first private company to manage a soft-landing on the moon would receive $20 million. The second-place company would receive $5 million, with another $5 million for milestone achievements.

Twenty-six teams entered the race… But none of them got to the moon by the deadline date: March 31, 2018.

Despite missing the deadline, the moonshot competition got its winner last week: an Israeli company called SpaceIL.

SpaceIL was formed in 2011… And on April 11, it became the first privately funded entity to enter lunar orbit and touch the moon’s surface.

Except it didn’t pull off the soft-landing…

View of Beresheet Near the Moon

Despite the crash-landing and the expired deadline, the X Prize Foundation gave SpaceIL an “A” for effort and awarded them $1 million in prize money. This was the first… and probably last… million-dollar crash-landing.

Aside from the humor, this is an unbelievable accomplishment.

To think that an early-stage start-up company can go from nothing to putting a satellite into orbit around the moon AND nearly putting a robotic lander on its surface is incredible. SpaceIL joins a short list of massive governments that accomplished this task.

And this has become the norm. Space was once the domain of NASA and other government agencies… but not anymore.

Private space companies like SpaceX… Blue Origin… Virgin Galactic… and others are doing it far cheaper and much faster than NASA ever could. And many of these bleeding edge space technology companies will eventually go public.

We are going to see amazing advances in space technology, and even commercial space travel, in the coming years because of this incredible innovation. And we’ll keep you posted on the top developments here in The Bleeding Edge.

P.S. And remember, I want to hear from you. Tell me what you think of The Bleeding Edge, good or bad. Drop me a note right here.