As I write this morning, the futures for the U.S. equity markets are looking up for the day.

Of course, the reason is what appears to be a de-escalation of tensions between Iran and the U.S. The U.S. is appropriately showing restraint by not overreacting to what was only a cosmetic missile attack by Iran on Iraqi bases housing American and allied troops. There were no casualties at all, which appears to be intentional.

For obvious reasons, this de-escalation is great to see, and I can only hope that it continues. Oil has already plummeted 9% to drop below $60 since it popped above $65 yesterday.

And things are looking very positive for the U.S.-China Phase 1 trade deal to be signed next week. China’s Vice Premier Liu will be visiting the United States next week, Monday through Wednesday, which should culminate in a signed agreement.

This is all good news for the economy, the equity markets… and, of course, technology investors.

The future of urban food production…

On Friday, I answered a reader’s question about how technology will feed an ever-growing population. Agricultural technology, or “agtech,” is actually going to be a big topic in 2020.

Whether it is automation for harvesting crops, applying artificial intelligence to maximize crop yields, building vertical farms, or using genetic editing to produce better crops… this will be an exciting year.

And that brings us to our first insight…

Scientists at the Cold Spring Harbor Laboratory on Long Island just created a new tomato that is optimized for vertical farming. This gives us a glimpse of what food production in urban areas will look like in the near future.

This movement aims to bring food production closer to urban areas by using technology to grow healthy foods indoors. Vertical farms consist of storage units or pods stacked on top of each other inside of a factory or warehouse. These farms will be highly automated, robotics-enabled food “manufacturing” plants.

And these farms will require food that is optimized for growth in such a setting. That’s where the scientists at Cold Spring Harbor come in. Using CRISPR genetic editing technology, these scientists made a few small modifications to a tomato plant.

First, they tweaked the self-pruning gene to make the plants flower and bear fruit sooner. Then they modified the gene that controls the length of the stems to make them shorter, which is more suitable for a vertical farming environment.

The result is a tomato plant that takes up much less space yet has a greater number of tomatoes clustered on it. 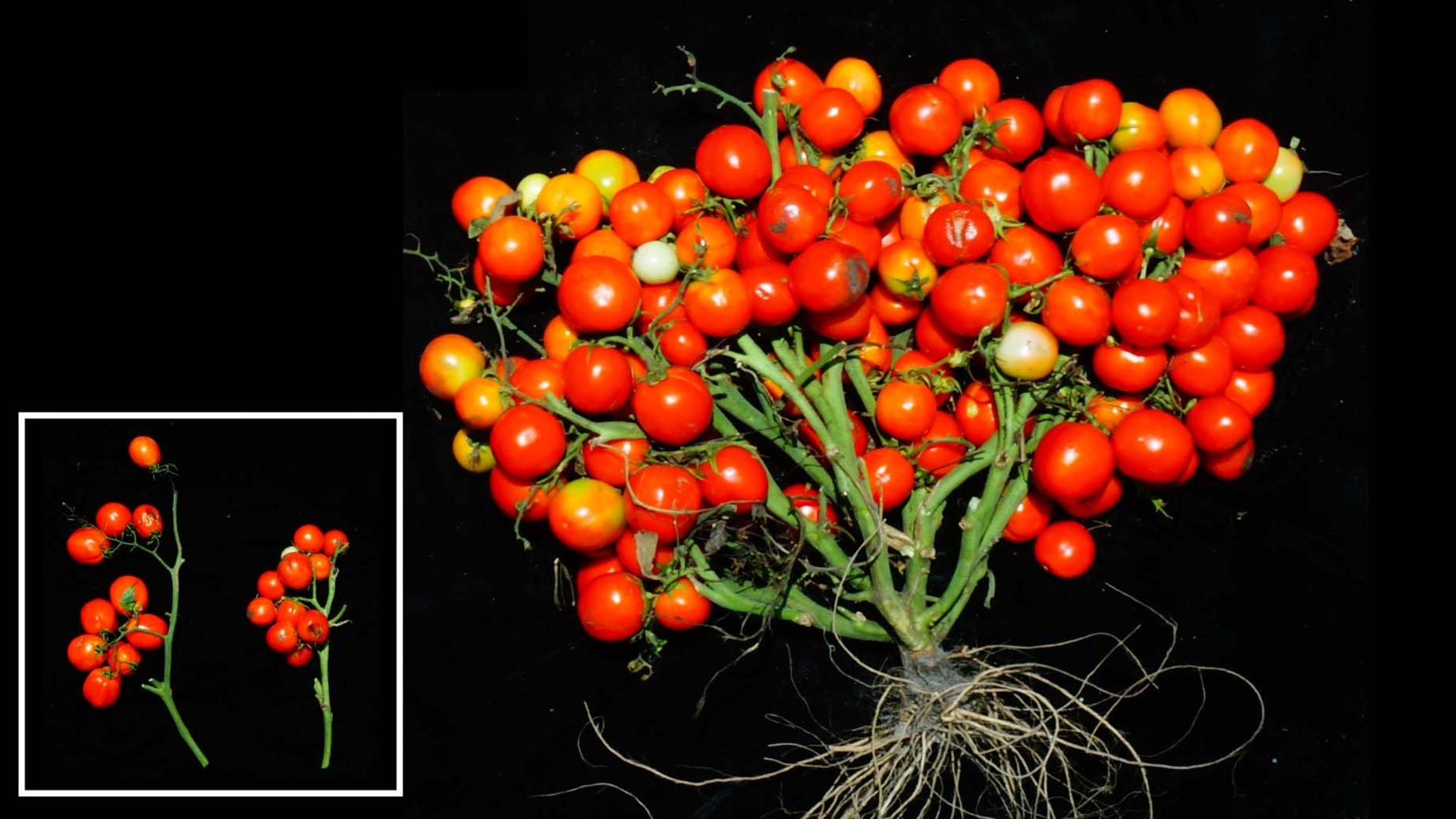 As we can see, this plant resembles a bush rather than a traditional tomato plant. This would be ideal for growing in small storage containers.

And what’s amazing is that it was created without introducing any foreign DNA. The scientists simply made small changes to the tomato plant’s own DNA. That means this is a non-GMO tomato. In other words, we don’t have to worry about “Frankenfood.”

There’s no question this is the future of food production. That’s not to say the traditional farm is going to disappear, but vertical farms will become widespread. They are just more economical. And they have a much smaller environmental footprint. And there is zero concern about fertilizer runoff into water tables or natural waterways.

If we think about food grown in city centers, consider this: It can be picked when ripe in the morning, placed on the supermarket shelf by the afternoon… and be on your dinner plate by evening.

That’s a much better model than shipping food across the country… and across the world. This will reduce our fossil fuel consumption considerably due to the reduction in transportation and logistics.

So this is an area I am excited to watch develop. It will mean fresher, more abundant produce for consumers who live in large urban areas. And, of course, I’ll be looking for any investment opportunities in this arena.

Get ready for delivery drones…

2020 is going to be the year for delivery drones. This is something we talked about last year on several occasions. Amazon, UPS, Google, and other companies are already piloting their own drones for delivery. Now the tech is ready…

What we are waiting on is the regulatory framework and updated rules from the Federal Aviation Administration (FAA). That is all we are missing. And good news – that’s all happening right now.

As of January 1, 2020, all airplanes and helicopters are required to broadcast their position using what’s called automatic dependent surveillance-broadcast out (ADS-B Out) equipment. We can think of it as a beacon that projects the aircraft’s location. This makes it easy for a drone operator to steer clear of any nearby aircraft.

So this is great progress toward a comprehensive regulatory framework. The next step is to install these ADS-B receivers onto drones so they can autonomously identify nearby aircraft.

Looking forward, there is legislation in the works that will require drones to have their own electronic IDs. This would make each individual drone identifiable in the air, just like all airplanes are today.

We’ll likely see this legislation implemented this year. At that point, the FAA should become comfortable enough to issue drone delivery licenses across the country. That’s when drone deliveries will become common in areas that would benefit from this new addition to the logistics network – mainly less-populated rural areas with houses and plenty of space to land.

And, of course, the first drone delivery programs are already in place.

Drones in Raleigh, North Carolina, have been transporting medical samples throughout WakeMed’s sprawling hospital campus since March of last year. And Google has been operating a residential drone delivery service in Christiansburg, Virginia, since last October.

So the drones are coming. Don’t be surprised when you buy Christmas gifts online at the end of this year… if a flying drone delivers them.

The rise of self-healing robots…

The IEEE/RSJ (Institute of Electrical and Electronics Engineers/Robotics Society of Japan) International Conference on Intelligent Robots and Systems took place last November. There, researchers from the University of Tokyo revealed a self-healing robot. You read that correctly. This robot can repair itself.

If we think about the future of robotics that will augment human labor, many will be bipedal – with two legs. Delivery robots will likely take on a humanoid form and have two arms and hands to facilitate and manipulate objects like boxes.

Clearly, these robots will be subject to the stress and strain of work, just as humans are. Joints tend to be the weak spots that can suffer damage from a fall. Robots are no different. The team from the University of Tokyo demonstrated the equivalent of an Achilles tendon made from metal and what happens when that metal “tendon” snaps due to an acute incident (such as a fall).

That’s where the robot’s self-healing ability comes in…

When that tendon breaks, springs and magnets pull the joint back together. Then, a heater activates and melts the metal tendon back together. The heater then cuts off, and the tendon hardens as it cools, thus repairing the damage.

This is a fantastic development. And it all happens within 30 minutes. Then the robot can go back to what it was doing.

Obviously, this has big implications when it comes to automated factories and warehouses that employ robot workers. Self-healing robots limit downtime to half an hour in the event of damage.

And in the past, we’ve discussed how robots will soon be delivering packages to our doorsteps. The last thing we need is for our robotic deliveryman to “break a leg” on the job. This technology could ensure the robot finishes the task at hand.

So let’s keep an eye on this trend. Advanced robotics is about to get very “real” in our day-to-day lives.