First up, a reader has several questions about the 5G rollout…

Dear Mr. Brown, I am a lifetime subscriber to Exponential Tech Investor. I have made some comments regarding 5G I hope you can address.

Thanks for writing in, Bill. And thanks for being a subscriber to Exponential Tech Investor. I can tell you’ve given this some thought.

These are all very nuanced technical questions about network design and wireless technology… And they’re exactly the kind of topics that journalists who write about 5G do not understand.

Fair warning, this might be a bit longer than our normal mailbag editions…

To your first point, I agree that on some 4G wireless networks with today’s applications, the speeds are suitable for what we need to do.

I say “some” because I live in a busier economic region of the country with larger populations. I have watched the speed of my 4G wireless network operator decline consistently over the last two years.

Today, I often have very limited use of internet access or video over my Verizon wireless network because it has simply become too congested. Explained another way, too many people are on the network doing data-intensive things (like watching video) that the network slows down.

The wireless networks in less populated areas have less congestion right now, but it won’t be like that forever. Here’s why…

The amount of data that is flowing over these 4G networks is growing exponentially. Longtime readers will recognize the below chart. It shows the amount of data currently being transmitted over our mobile networks. 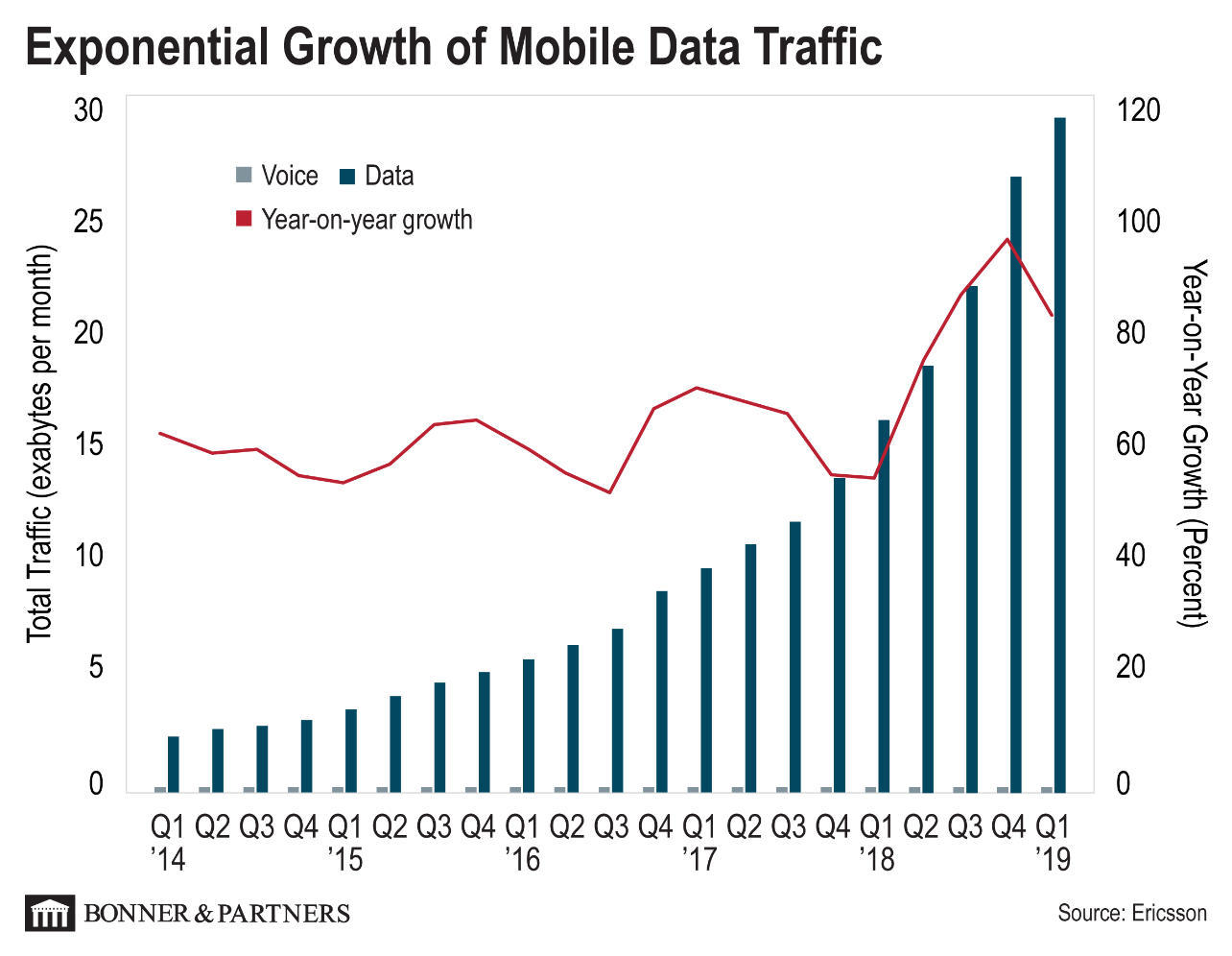 Look at the most recent figure from Q1 of this year. Our wireless networks saw nearly 30 exabytes of data traffic. In Q1 of 2018, that number was just over 15 exabytes.

As I’ve mentioned, an exabyte is equivalent to 100,000 times all the printed material in the Library of Congress.

This growth in data simply can’t be transmitted over 4G wireless networks forever… Eventually, every 4G network will slow down.

Without a 5G-enabled smartphone or tablet, these apps just won’t run properly. So yes, you’re absolutely right. There will always be a small minority of consumers who just want to use a cell phone for phone calls and maybe text messages. For that small group, 5G isn’t necessary. Our 4G or even 3G networks will suffice.

These mmWave networks require a different network architecture – specifically, a small cell architecture. That means the 5G network will require exponentially more base stations to provide the same kind of network coverage that 4G wireless networks provide today. And yes, that even means putting 5G base stations inside buildings.

And to your last two points, it’s true that 5G is first being deployed in large metropolitan areas. This is just a business decision to deploy to the greatest number of potential customers. Rural deployments are just a matter of time. The more rural, the longer it will take.

It is the same in any country in the world… basic business economics. Build out the largest revenue-generating markets first and use that cash flow to fund the build-out in the rest of the markets.

Some readers have written in to tell me that they still only have 3G wireless coverage where they live. It will be the same as 5G rolls out. In more rural areas, our 5G-enabled smartphones will “fall back” to 4G network coverage when 5G network coverage isn’t available. And 3G networks will be phased out entirely so that the 3G wireless spectrum can be freed up for other purposes.

But for truly remote locations like out at sea, that’s where satellites come in. After all, there are no physical wireless networks across the oceans. We published an insight on this topic yesterday.

Elon Musk’s SpaceX plans to launch 30,000 communication satellites. I suspect Musk plans to create a massive backhaul network for space. This Starlink system would be able to service very remote locations where it’s not practical or not possible to deploy the much-faster 5G networks.

Thanks again for your thoughtful questions.

And a final note for investors. This also presents one of the best investing opportunities of the next decade. 99% of investors will miss it. But you don’t have to be one of them.

If you haven’t already, I encourage you to go right here and learn about my No. 1 5G stock to buy today.

An Airbnb, but for your car…

Next up, another question about Uber and how your next car might pay for itself…

Jeff, regarding Uber. Wouldn’t the company morph into a hub or connector platform?

A lot of families have a car (some have two) that sits idle most of the time. Why not put their self-driving car up for rent?

If I wish to rent a car, the hub knows a car available near me. The car can recognize me with facial recognition and take my credit card. It can calculate usage and bill me when I get out. Surely someone will develop an app for this. Isn’t this what Airbnb is now?

Thanks for the question, Giulio. For readers who missed it, in last week’s mailbag, I said that Uber would transition to a company that manages a fleet of fully autonomous taxis. It would likely rent or lease the vehicles to build out its network.

It remains to be seen if Uber will decide to allow self-driving car owners to “opt-in” their vehicles to the Uber fleet when they’re not in use. But if Uber doesn’t take this step, that doesn’t mean that others won’t.

Late last year, the company Tesloop launched an initiative called Carmiq. Tesloop is a small company known for its semiautonomous taxi service. It would shuttle passengers in self-driving Teslas and make use of the “autopilot” feature for highway driving.

Carmiq is an online service designed for connected electronic vehicle owners. With the simple press of a button on a smartphone application, owners can order car cleaning, tire maintenance, or vehicle insurance.

But there are two additional services that Carmiq plans on launching that caught my eye. They are “FleetShare: Rent a Tesla” and “FleetShare: Share Your Tesla.”

This is the future… shared autonomous vehicles (SAVs). Just like ridesharing companies Uber and Lyft today, there will be networks of SAVs that will be available on demand.

Only instead of the car operating as a taxi, users will rent the car to drive themselves… or just ride along while the AI takes the wheel…

After all, on average, cars are only used about 5% of the day; the other 95% of the time, they are parked.

Imagine this… You arrive at work in your Tesla, get out of the car, then press a button on a smartphone application that instructs your Tesla to “join the fleet.” While you’re at work, your Tesla is out driving itself… giving rides, earning money… And it returns to your office at the end of your workday.

Imagine that… Your car becomes an asset, literally generating income for you every day.

I envision that Tesla will establish its own SAV network and get a cut of the business, just as Uber and Lyft do for providing the network for ridesharing services.

Taking things one step further, imagine a self-driving car company like Tesla offering a lease-only model of its cars… like the Model 3. There has been talk of this already. Imagine if our monthly payments on a three-year lease were $500… but we could generate $600 a month by “opting-in” our Tesla into the self-driving car network.

That means consumers would basically get a Tesla for “free” and would generate a net $100 a month in income.

I’m certain that there would be millions of “takers” for a deal like that.

Would this interest readers?

Let’s conclude with a question that really caught my eye. And I’ll even ask a favor of my readers…

Hello, Jeff. Mariano here. I recently signed up for The Near Future Report and look forward to a great experience. I also read your current products, but there is something missing: A PRE-IPO service.

I read that you are a successful Silicon Valley angel investor. This got me thinking. With this experience, track record, and connections, a pre-IPO service with you would probably be your best and most popular service.

I feel like your followers would think the same. I hope you consider this idea and hope to try it soon.

First off, thanks for joining The Near Future Report, Mariano.

I hope you didn’t miss my last two recommendations (catch up here and here). They are companies I’m very excited to research for subscribers. I’d also encourage you to review our model portfolio so you can begin building your own portfolio of exciting technology investments.

But to your question…

This is something that I have been very passionate about. I’ve been working hard to find a way to give investors access to private companies that have the potential to go public. And I know how to do it, but there are restrictions.

In later-stage private technology companies, it is possible to do this through secondary markets. Unfortunately, secondary markets are accessible only to accredited investors. And they are not very liquid, and often, there isn’t much allocation. This makes it very difficult to build a research service. I want to make these kinds of investments available to all investors, not just a small few.

The problem is the current regulations for investing in these kinds of private companies.

The same problem exists with earlier stage private technology companies. With only a few exceptions, these types of deals are only available to accredited investors.

What I can tell you is that I’ll continue to work to try and find a way to bring a product like this to market. But I won’t sacrifice the quality of investment opportunities just to get it done…

Stay tuned… my readers will be the first to know.

That’s all the time we have this week. If I didn’t get a chance to answer your question, then submit it here. I’ll do my best to get to it next Friday.