The weekly U.S. job numbers came out today showing continued improvement. Numbers came in at 1.5 million unemployment claims, meaning we still have a long way to go before we see numbers in the low six-figures typical of pre-pandemic levels.

The market response this morning wasn’t positive. Some economists were incorrectly predicting about 1.3 million claims for the week. 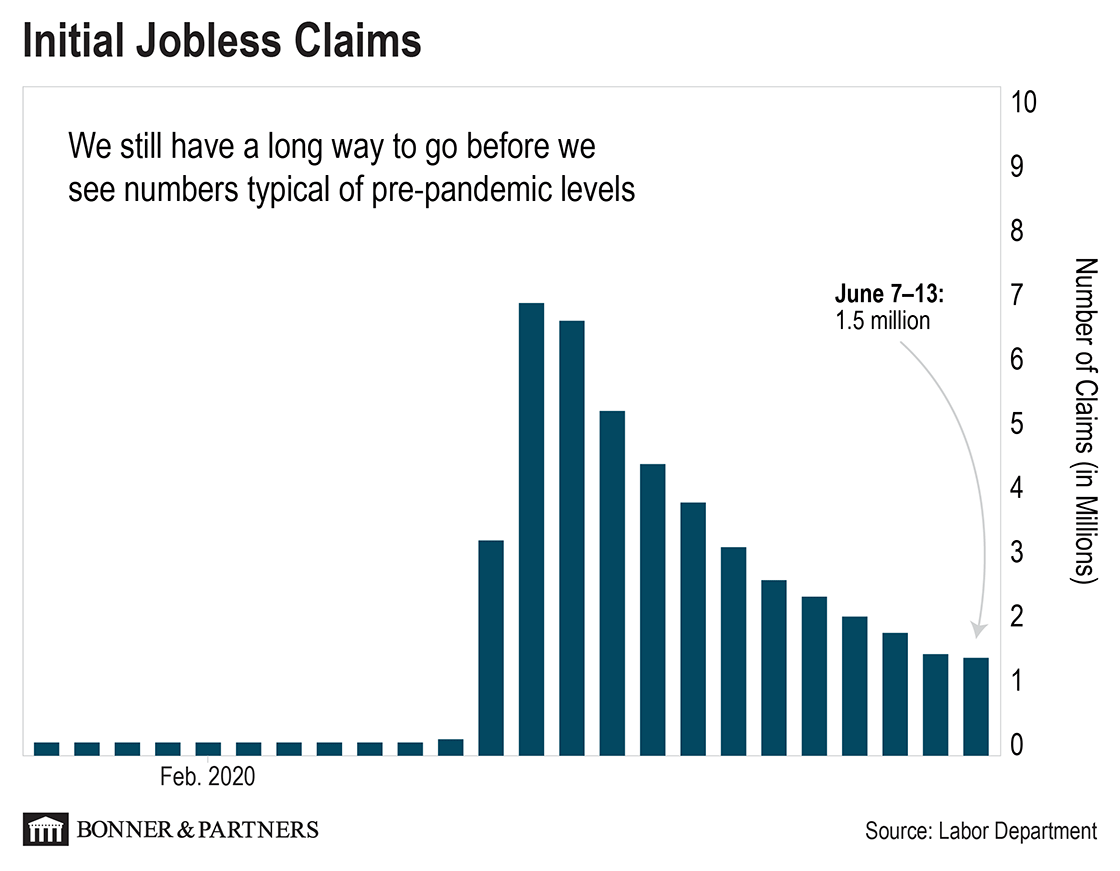 It is easy to take a negative view in light of what’s going on, but that would be overlooking what is really happening. The fact is that the economy has rebounded more quickly than expected. Initial jobless claims continue to drop, as we can see above.

Continuing unemployment claims also decreased a bit to 20.5 million. Overall, employment increased by a few million jobs in May, and that’s before most states officially opened up. And as we discussed on Tuesday, U.S. retail sales rose a record 17.7% in May.

The economy has significantly opened up in June compared to May, and by July, more major economic restrictions will be lifted. This is a strong argument for continued improvement in economic numbers in June, July, and August.

And the best is yet to come. Several clinical trials are underway that will be completed before the end of summer, and they are already showing strong promise for both therapies and vaccines to manage COVID-19. These are very positive developments that support preparedness for additional viral spread in the fall.

While the world might not be able to travel freely on a summer holiday this year, we’re still in for a good summer… It will just be a little closer to home.

A treatment for COVID-19 was right under our noses…

There has been a surprising development in therapies for COVID-19.

Research results just demonstrated that a common steroid is effective at treating patients who are hospitalized with COVID-19.

The steroid is called dexamethasone, and it has been shown to reduce the death rate by 35% for those on ventilators and 20% for those on oxygen.

Get this – dexamethasone was approved 59 years ago to treat rheumatoid arthritis and asthma. It’s in mass production and widely available right now. And that means it’s also cheap.

So after scrambling for the last four months in search of a COVID-19 treatment, it turns out we had one under our noses this entire time. How’s that for ironic?

And this is the first study to demonstrate efficacy for the most severe cases of COVID-19.

The caveat, though, is that the research hasn’t been published yet, so it hasn’t been peer-reviewed. We’ll want to watch for that to be sure.

Still, the medical community has had very positive things to say about this study. In fact, I was on a call with Dr. Ashish Jha from the Harvard Global Health Institute this week, and he made some upbeat comments about dexamethasone.

Dr. Jha was excited about the fact that the drug is widely available, cheap, and simple to administer. That makes it easy to treat the most severe COVID-19 patients anywhere in the world.

Others in the medical community have echoed this sentiment. Even former FDA Commissioner Scott Gottlieb said the dexamethasone study was encouraging.

And as a bonus, this will prompt researchers to conduct studies that combine dexamethasone with other therapies that are currently in trials. There may be combination therapies that produce even better results.

Twitter has discovered a rash of state-backed propaganda accounts…

Buckle up for this next one…

Twitter just announced that it is shutting down 32,242 accounts that are linked to nation-state misinformation operations. This is quite disturbing.

Of these, the Chinese government controlled 23,750 accounts. The purpose of these accounts is for spreading propaganda and influencing the way that users think.

In addition, Twitter identified 150,000 more accounts designed to boost the content of these core accounts. These accounts are called “amplifiers.” They are used to amplify and spread the desired message to even wider groups.

To wrap our heads around this, we have to imagine big open rooms in massive government-owned or controlled facilities with rows and rows of desks and thousands of people lined up shoulder to shoulder in front of computers.

Each of these people has one job to do – spread propaganda through a bunch of different Twitter accounts.

These accounts pushed narratives that were favorable to the Communist Party of China. And they also tried to paint China’s move to enforce more control over Hong Kong in a positive light.

Turkey was the next biggest offender. Twitter disclosed that the Turkish government controlled 7,340 accounts. These accounts were used to amplify political narratives supporting President Erdogan.

And rounding out the list was Russia. Twitter found 1,152 accounts that the Russian government used to spread its own propaganda.

This is just incredible.

Legions of people paid by nation-states have widely infiltrated the world’s social media platforms in an effort to control the way we think, vote, and interpret events. The goal is to amplify anger and divide society.

Ironically, many media outlets are guilty of the same thing.

To me, the big takeaway here is that it is getting harder and harder to know what information is real and what isn’t.

There is immense value in knowing your information sources and confirming that they are trustworthy and objective. My team and I have to work harder than ever to verify and double-check all information.

On Twitter, we should always see if an account is confirmed. Look for a blue circle with a white checkmark inside next to the account name.

Here’s an example of Elon Musk, who happens to be very active on Twitter.

If we see this checkmark, it means we are looking at a confirmed account. Twitter has verified that the user is who they are claiming to be.

And if we don’t see it, the account is not confirmed. That means we don’t know where the information is coming from or whether it is a real account.

There is a huge market around the world for unbiased and objective news and information. Some news or media outlet needs to figure out how to move away from the advertising-driven “if it bleeds it leads” model of journalism and deliver something that consumers really want.

Longtime readers will be familiar with OpenAI. It started as a nonprofit artificial intelligence (AI) research institute in 2015. Elon Musk was one of the key founders. And the idea was to work through the ethical issues around how AI and machine learning are used.

Well, OpenAI spun out a commercial arm last year when it took in a $1 billion investment from Microsoft. We talked about that last July.

It was comical because Microsoft tried to frame its investment as a benevolent act. But OpenAI turned around and gave much of that $1 billion right back to Microsoft to pay for use of its cloud-based computing services.

So it was basically a self-subsidy. How’s that for inflating revenues?

OpenAI put the computing resources to good use, however. OpenAI created a text generator. This product is very good at natural language processing. It can understand long strings of text, interpret the meaning, and deliver some information of value in return.

And as the name implies, the product can also generate text on its own. For example, users can type half a sentence, and the text generator will complete the sentence in a sensible way.

OpenAI calls the third generation of its text generator GPT-3. It used Microsoft’s cloud computing to train the AI powering GPT-3 on about a trillion words collected from the internet and digitized books. That’s how it learned to understand human language.

Training an AI on such a vast data set would not be possible without a supercomputer. That’s where the Microsoft “investment” was crucial.

And now both Google and Microsoft can use GPT-3 to improve their consumer products.

Google implemented GPT-3 into its popular search engine. GPT-3 helps provide users with better search results based on what they type into the search bar. In fact, I’ve already noticed the improvement in Google’s search engine.

In addition, GPT-3 could be used for an array of customer service functions.

Companies could feed it the most common questions they get from customers and train GPT-3 to respond to customer inquiries in real time through a chat feature. Customers would never know that they were talking to an AI on the other end.

So this is an impressive product. And if any of us use Google or Microsoft’s products, we are already benefiting from the use of this new technology.

As I have said before, AI is going to be a massive trend that reshapes our world. And there’s a good chance AI provides tech investors with the best investment opportunities of our lifetimes.