As you may have heard me share recently, the NFT “moment” is here.

Non-fungible tokens (NFTs) are still new to many people. But they are on the verge of going mainstream. Don’t be mistaken – these digital assets are far more than just collectibles or art. And they’re certainly not a fad.

The technology underlying NFTs is going to play a huge role in how we earn money, transact, and interact in the future. And investors who understand the potential here early can profit as this tech takes off.

Like bitcoin, I expect NFTs to give investors who place their stake early a rare opportunity to build wealth.

That’s why I’m hosting an event I’m calling The NFT Moment. It takes place this Wednesday evening, and I truly hope all my Bleeding Edge readers join me.

I’ll be sharing more about the forces behind the NFT movement… and the top three investments I see on my radar right now.

Even more exciting, my team and I are in the process of minting a set of new NFTs… and anyone who attends this Wednesday will have the chance to receive one for free.

Please make sure you’re on the list for The NFT Moment. Simply go right here to RSVP.

Tesla just signed a major agreement with a company nobody has ever heard of before – Talon Metals Corporation.

This deal will go unnoticed in the mainstream press, but it’s incredibly exciting. It ensures that Tesla will have control over the source of a critical raw material used in its battery production.

The problem is, Talon hasn’t been able to develop the Tamarack mine yet. That’s because the company didn’t have the capital to develop the mine. Right now, Talon has just $33 million in cash on the books.

And that’s where Tesla comes in…

Per their agreement, Tesla will purchase 75,000 tons of nickel from Talon Metals. It’s a guarantee on future production.

Talon won’t have any problem funding the mine’s development now. And the resulting nickel production will give Tesla enough nickel to produce one million electric vehicle (EV) batteries.

For context, Tesla produced over 930,000 EVs last year. So the Talon deal will secure enough nickel to supply about an entire year’s worth of EV batteries on its own.

Paired with Tesla’s other nickel sources, this will secure the company’s production capacity for years into the future.

Clearly, this is just one more big competitive advantage for Tesla.

We see the lofty EV production projections coming from legacy carmakers like Ford and General Motors (GM), but there’s a dirty secret they won’t talk about…

These companies are almost completely dependent on raw materials coming out of China for their EV batteries. They don’t have any control over their own supply chains.

When everything is running smoothly, that might not be such a problem. But as we have seen recently, the West can no longer depend on timely deliveries coming from Asian markets.

Simply put, there’s no way that Ford and GM are going to hit these numbers. They won’t have enough materials to do so.

Recent estimates suggest that there will be a global shortage of 128,000 tons of nickel by 2024. That’s 1.6 million EVs that won’t be produced due to a lack of nickel.

That’s why I’m surprised Tesla is the only company that has stepped up and secured such a strategic deal with a U.S.-based mining company. None of the other U.S. automakers has been as proactive as Tesla in securing critical materials for the production of EVs.

And the numbers show it… Tesla seemed to defy the supply chain problems over the last year, increasing EV production. And they did this all while other manufacturers reduced their output.

There’s another interesting layer to this story…

Talon Metals will use new technology to remove carbon dioxide (CO2) from the air at its mining site. Talon’s tech will bond CO2 to the rocks processed during mining.

Basically, the CO2 will be locked away in the stone for storage. The goal here is to have a nickel mining operation that is carbon neutral.

Talon wants to remove as much CO2 as it uses in the mining process. It refers to this as sustainable mining, and it fits well with Tesla’s clean energy ethos.

So this is another great strategic move by Tesla to guarantee future production. The rest of the industry is scrambling to catch up right now. Tesla will remain in the pole position in the EV race for years to come.

Taiwan Semiconductor Manufacturing Company (TSMC) just made a big announcement: the company is investing $44 billion to increase its production capacity by as much as 47% this year.

I’ve often said that semiconductor demand is a proxy for global economic strength. As the single largest semiconductor manufacturing company in the world, TSMC itself has become a great proxy for economic demand.

There’s no other company like TSMC. It’s unique in its ability to quickly expand production capacity in a very complex and capital-intensive business like semiconductors.

TSMC has proven time and again that it can increase production in a period measured in months, rather than years. And it is rushing new production online because global semiconductor demand is booming. (To learn more about investing in this trend, please go right here for details.)

About 80% of TSMC’s $44 billion investment will go toward leading-edge semiconductor processes. In fact, the company will go into volume production for 3 nanometer (nm) chips in the second half of this year.

For context, Apple’s new iPhones run on 5 nm chips. The significance here is that every shift down to smaller manufacturing processes reduces power consumption and increases performance. So TSMC’s 3 nm chips will improve future generations of iPhones and other mobile devices.

As for the remaining 20% of the spend, TSMC will focus on legacy manufacturing processes. The big item here is 28 nm chips that often supply the auto industry.

I’m sure most of us are aware of the semiconductor shortage impacting new car production right now. This will help solve that problem.

Most don’t understand that many of the semiconductor shortages aren’t happening with the most advanced chips. The older manufacturing lines have actually been short on capacity.

The bottom line is that whenever we see record levels of investment made to expand semiconductor production, we can be sure that there’s incredible global demand.

And that signals that the global economy is humming. There’s a lot of demand out there for new products to meet both consumer and business demands.

And, of course, the opposite is true if we suddenly see a large drop in capital expenditures by TSMC. I’ll be keeping a close eye on what TSMC projects for its investment into 2023.

The new and improved Nuro is here…

Autonomous delivery company Nuro just revealed the third generation of its delivery vehicle. This is the model that will go into commercial production. 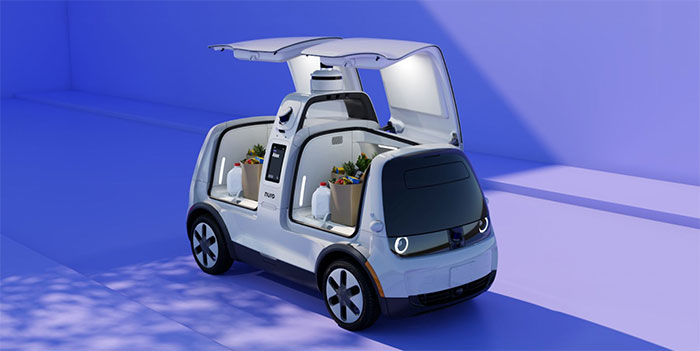 This will look familiar to longtime readers. We first discussed Nuro way back in February 2020. And we checked back in on the company last summer when it inked a deal with FedEx.

And while Nuro’s next-generation vehicle here looks very similar to the earlier generations, there are some material improvements.

Nuro’s latest design is 20% smaller in width than the average passenger car. The size is less obtrusive than a normal passenger car. It’s also lighter and able to navigate more narrow lanes.

The vehicle benefits from an increase in cargo space as well. It can now hold an impressive 24 bags of groceries between the two compartments, and it can carry as much as 500 total pounds.

Better yet, the compartments can be heated and cooled. This allows products to be refrigerated as low as 22° Fahrenheit. And meals can be kept hot up to 116° Fahrenheit. The design was obviously intended for the delivery of food and perishables.

What’s more, the vehicle can now reach top speeds of 45 miles per hour (mph). That’s up from just 25 mph for the first-generation delivery vehicle.

And Nuro added one more safety improvement – an exterior airbag. 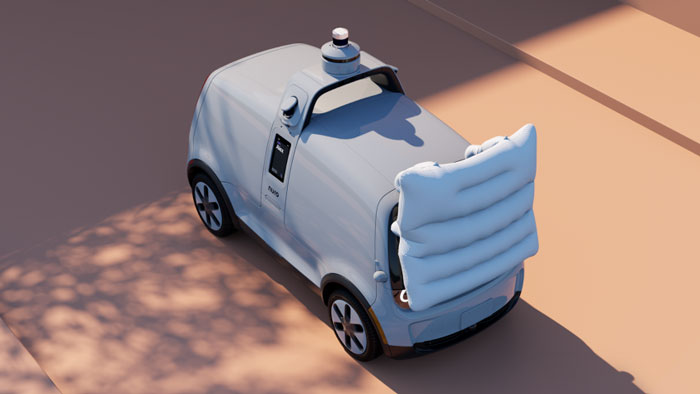 We can see above that it looks like a blow-up mattress. If someone or something suddenly moves into the vehicle’s path, this will deploy to lessen the blow.

So Nuro is finally ready. They are going into commercial production this year.

The Nevada plant will be able to produce tens of thousands of delivery vehicles a year. And it will create 250 skilled jobs in the process.

So everything is happening right here in the U.S. The American manufacturing renaissance is alive and well.

We’ll continue to track Nuro’s progress closely as these vehicles start to roll off the production line. I can’t wait to see one of these roll up to my house with a delivery for the first time.

That could happen as soon as later this year…