How much would you pay for a piece of digital art?

It’s a question I’d ask us to consider today.

Many people are making millions in a matter of weeks buying and selling a unique kind of digital asset that we may already be familiar with – non-fungible tokens, or NFTs.

For newer readers, NFTs are digital assets that are cryptographically secured and authenticated on a blockchain. We can think of these as digital collectibles.

Artwork, trading cards, exclusive video clips, poems, and similar items can all be “tokenized” and stored on a blockchain.

Let’s take the Bored Ape Yacht Club, for example. It may not be on every reader’s radar.

This is a series of digital collectibles showing humorous drawings of various apes. You might think this sounds silly on its face… but this collection has proven among the most valuable in the entire NFT market. 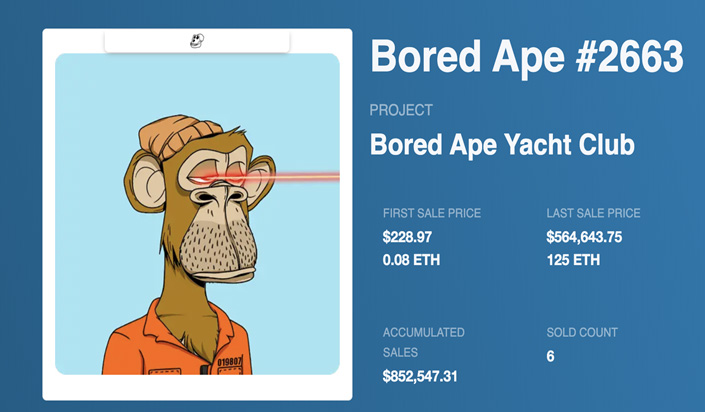 And another Bored Ape jumped from $228 to almost $3 million. Even the rapper Eminem recently spent up to $450,000 on a Bored Ape – all because it bore a strong resemblance to him.

In total, tokens related to this collection have generated over $1 billion in sales since their initial release.

And there are even more NFTs out there selling for outrageous sums.

I can guess what we’re probably thinking. This seems a little crazy. And I would personally never spend that much on a single piece of art.

But we should keep in mind that it’s not uncommon for rare pieces of physical art to sell for hundreds of thousands or even millions of dollars.

What we are seeing is the future of artwork and collectibles. It is a market that I predict will be valued at $100 billion this year.

The “smart money” sees this. And they are gaining exposure right now.

In December alone, NFT sales reached a staggering $2.26 billion. That’s higher than the entire sales volume of NFTs in 2020, which sits around $340 million.

And in 2021, over $23 billion traded hands in the NFT market. That number will increase exponentially in 2022.

What’s more, venture capital is on the move.

Andreessen Horowitz – one of the most successful VC firms in history – backed two raises for the popular NFT marketplace OpenSea over the last year. Across two funding rounds, the firm funneled over $123 million into the company.

And in January, OpenSea raised more than $300 million in a funding round led by the cryptocurrency-focused firm Paradigm.

All this capital has driven OpenSea’s valuation to more than $13 billion.

And Dapperlabs – the company behind massively popular NFT platforms like NBA Top Shot and Cryptokitties – completed a $250 million funding round back in November led by Google’s VC arm, Andreessen Horowitz, and various other crypto-focused firms.

That raise has allowed Dapperlabs to initiate its own equity offering as it looks to expand its sports trading platform and build out more NFT collections.

Even Kraken, one of the world’s largest digital asset exchanges, is launching its own NFT marketplace this year after seeing an influx of capital from tech-focused firms like Joint Journey.

This infusion of capital is contributing to the moment we’re seeing for NFTs right now.

And each of these projects is paving the way for what I believe will be a major inflection point in the NFT market in 2022.

So, let’s consider our question again. How much would we be willing to spend on a single piece of digital art?

It’s entirely a personal decision, of course. But I have some good news. Investors do not have to purchase a single NFT to profit from this technology trend.

Buy the Project, Not the Art

The way to profit from this megatrend without ever buying an individual NFT is by investing in the blockchain projects, digital assets, and even public companies supporting and building this market.

They’re the coins enabling these assets to be minted, bought, and sold across the world.

And on Wednesday, January 26, at 8 p.m. ET, I want to show my readers how we could see decades’ worth of returns in as little as three months with these projects.

Not only that… I’m excited to announce the biggest giveaway in the history of Brownstone Research on that same night.

During my broadcast, I will not only reveal these three coins… I’m also giving away my first-ever line of NFTs to several attendees. And I think all readers will really enjoy the collectibles we’ve come up with.

So, if you’re interested in joining me, you can go right here to reserve your spot.