Trade negotiations ratcheted up a notch on Friday between the U.S. and China.

China announced that it would increase tariffs on $75 billion of U.S. goods. President Trump responded with additional increases in tariffs on $550 billion in Chinese goods. He went one step further by “ordering” American companies to look for an alternative to manufacturing in China, preferably in the U.S.

This is fascinating to watch from a game theory perspective. The latest round of “negotiations” certainly indicates that China is looking to wait things out until the next election, hoping for a weaker president.

This was coupled with a very lackluster Federal Reserve confab in Jackson Hole. Federal Reserve Chairman Jerome Powell gave an uninspiring talk. Despite implying that future rate cuts were likely in store, he lacked resolution.

Naturally, the markets didn’t respond well to Friday’s events. The Nasdaq Composite was down more than 3% on the day.

While days like Friday can be unnerving, they pass just like every other day. And the Federal Reserve still has plenty of room to lower the federal funds rate to accommodate further economic growth. I’m certain that the rates will come down at least another 50 basis points if we don’t see a resolution to the trade negotiations within the next month.

And summer is wrapping up in the Northern Hemisphere, which means schools are getting back into session and companies are ramping up to full steam again. So the world will return to normal productivity levels over the next couple of weeks. We have plenty to look forward to in the remaining months of 2019.

I’ll keep monitoring the situation. For now, let’s turn to our insights…

The DAO is back…

Some readers may know the term “DAO.” It stands for “decentralized autonomous organization.”

The DAO was an Ethereum-based project that crowdfunded more than $150 million to start a decentralized venture capital (VC) fund. The idea was that anyone could join and participate in the DAO’s upside. And investment decisions would be made based on network consensus.

In other words, everyone participating in the DAO had a say in what it invested in. The more money you put in, the more votes you received. A course of action was only taken if there was a majority of votes. This was all done using Ethereum and smart contracts.

Unfortunately, the original DAO was hacked in June 2016. The attacker stole millions of dollars in ether. That stopped the DAO before it even got started.

But now the DAO appears to be taking a second swing of the bat… Its mission is the same. And this time, it’s more secure, and it has a better governance structure.

There is a Treasury League to manage the underlying capital. There is a Venture League tasked with sourcing deals. There is a Compliance League to ensure the other leagues operate within the rules of the DAO. And there is a Dev League to handle technical issues and software development.

This makes the DAO better positioned for success this time around. And looking at the bigger picture, I think this is a lens on the future design of many organizations…

That’s because the concept of a DAO isn’t limited to a VC fund. Anybody can form a DAO around any common goal.

A group of software developers could set up a DAO to launch a new artificial intelligence (AI) digital assistant. The group would contribute to the project and receive digital tokens instead of paychecks.

Once the digital assistant was ready, anyone who wanted to use it would have to buy tokens first. And, of course, the more people who buy the product, the more valuable its digital tokens become. That’s how the workers would be compensated.

It’s hard for us to wrap our heads around this concept today. We are so used to employers, hierarchies, cubicles, and organizational charts. But the DAO model is a great way to crowdsource solutions to certain problems without needing to have all the overhead of a common enterprise.

We will see more and more of this style of organization in the years to come.

A breakthrough in cheap electricity…

Scientists have discovered a way to generate electricity just by running fluid over metal. This works for any fluid that has ions in it. Ions are atoms or molecules with an electrical charge. For example, seawater is full of ions.

The fluid runs over thin slabs of metal like iron or nickel. The ions in the fluid interact with the metal, creating an electrical current.

Water Flowing Over Layers of Metal 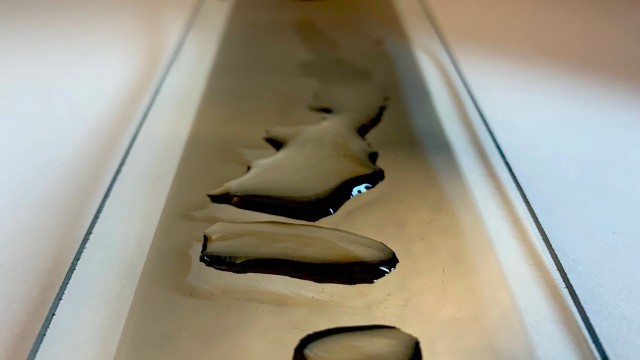 Here’s what’s important about this discovery… It means we have the potential to generate kilowatt-hours (kWh) of electricity with just water and metal. And it can scale…

And if we coupled this technology with solar energy, we wouldn’t need such a large stack of metal. We could take every home off the grid with just seawater, metal, and sunlight. That’s exciting.

We have long seen the value of having medical sensors implanted in the body. We could use sensors for diagnostics and even to help regulate certain body functions. The trick is how to power them.

That’s where this new tech comes in…

Human blood has ions in it. That means implanted medical sensors could be powered just by having blood flow over them. That’s a game changer.

So this is a revolutionary scientific development that has great potential in a variety of fields. My challenge is to find and track the companies that will work toward commercializing this technology.

Rest assured – once I find an investment opportunity around this theme, my readers will be the first to know.

Last week was the Hot Chips conference. This is a major industry conference in the world of semiconductors.

During the event, Tesla announced its latest and greatest AI chip. These are custom AI chips for Tesla’s self-driving cars.

As we know, Tesla is much more than just a car company. It is one of the leading AI companies in the world. That’s what most of Wall Street doesn’t get.

As for its new AI chips, Tesla says they offer 21 times better performance than the NVIDIA chips it was using in its cars previously. And they are 20% cheaper.

Customized chips are a major trend in the industry. NVIDIA and AMD make fantastic semiconductors. But they are general purpose. They are designed to do a lot of things well… But they aren’t optimized for specific tasks.

Companies like Tesla have very specific requirements. They don’t need to do a lot of things well. They just need to do one thing optimally. In Tesla’s case, that’s running its AI software for its self-driving cars in a power-efficient way.

And that’s why Tesla designs its own chips. It gives it an advantage over every other car manufacturer on Earth. Traditional car companies each source technology from the same Tier 1 automotive suppliers. That means that they don’t have any technological advantages compared to their competitors.

Because Tesla’s specialized AI chips are designed by the company, nobody else can use them. That gives Tesla an enormous competitive advantage over legacy carmakers. Tesla vehicles are designed and optimized to do things that no other car can do.

In business, having exclusive access to bleeding-edge tech is a recipe for long-term success. I’ve personally seen this again and again during my career.

That’s why I continue to be bullish on Tesla.

P.S. Last week, I told everyone who attended my 5G investment summit how to maximize their gains from the coming wave of technology. The fifth generation of wireless networks will transform the world… and provide a once-in-a-decade investment opportunity. I even shared my No. 1 watchlist company for 5G…

If you couldn’t make it, make sure to watch the replay of my presentation here before it disappears this Tuesday at midnight.