Welcome to our weekly mailbag edition of The Bleeding Edge. All week, you submitted your questions about the biggest trends in technology.

Today, I’ll do my best to answer them.

Before we get to today’s questions, I want to discuss a recent event that has given me cause for concern.

Last Thursday, China launched Tianhe, the first of its space station modules, into Earth’s orbit. We’ll take a closer look at this next week. But for now, we have bigger concerns.

Typically, when the aerospace industry launches a heavy payload into orbit, the first stage booster quickly returns back to Earth and is directed toward the middle of a large ocean, where there is no chance to affect a populated area.

That wasn’t the case with Tianhe.

China launched the booster into orbit rather than returning it to Earth, and now it is hurtling around Earth at 18,000 miles per hour. It’s about to reenter the Earth’s atmosphere sometime this weekend. I wish I had better news.

The “plan,” if one were to call it that, is basically that things should be alright. After all, about 71% of the Earth’s surface is water.

To put things in perspective, this booster is one of the 10 largest objects to ever reenter Earth’s atmosphere uncontrolled. We don’t know what will happen or where it will land. But we do know that as much as nine metric tons of the booster may hit Earth.

The tricky part is that, because the booster is moving so fast, we literally can’t predict where it will land. A ten-minute difference in reentry can mean a difference of thousands of miles on Earth. It can also mean the difference between landing in an ocean or nine metric tons pummeling through a populated area.

While the chances of such a disaster happening are quite small, they are far from zero. I’ll be keeping my fingers crossed this weekend.

When companies like SpaceX are able to return their boosters back to Earth using launch pads – or on floating platforms at sea for eventual reuse – I’m confident the world can do better than just rolling the dice like this.

This isn’t the first time either.

Just last year, after the first flight of the Long March 5B rocket, the booster passed uncontrollably over populated areas. Pieces ended up crashing in Africa. Fortunately, it was not a populated area that was hit.

Good luck this weekend. Let’s hope for the best.

Now let’s turn to our questions…

How to ensure clean water…

Let’s begin with a question on clean water technology:

Hey Jeff, you’ve provided some incredible content of nuclear fusion and why it’ll be out sooner than expected. However, that’s just one of the aspects in addressing climate change. Can you provide any information about clean water technology? Will it be out in the next few years like nuclear fusion?

Hi, Hemanth. Thanks for sharing your question. You’ve hit upon a huge problem that we’re trying to solve.

It’s hard to believe, but an estimated 2.1 billion people around the world still don’t have access to safe drinking water. And unsafe water is responsible for around 1.2 million deaths every year.

These are tragic numbers. The lack of clean water is among the largest health and environmental problems around the world.

But the good news is, technology is helping provide solutions that could one day eradicate this issue.

As one example, I wrote last year about research out of MIT that provided a way to turn seawater into clean drinking water – a process called desalination – using solar power.

Until now, traditional desalination has been inefficient, has required carbon-based energy to operate, and has often produced harmful byproducts that can damage ocean ecosystems.

But MIT’s research makes this process cheaper… and completely clean. Even better, this system can produce twice the amount of clean water as conventional methods.

And since more than 96% of Earth’s water is salt water, this technology will be a game changer once it can be produced at scale.

Zero Mass Water’s Source project has developed “hydropanels” that use solar power to collect water vapor from the air. Its panels are currently providing drinking water in more than 48 countries.

Another organization in Morocco is working on a project that “harvests” fog and provides running water to nearly 500 people in the region.

And researchers out of Stanford University have developed a postage stamp-sized device that can disinfect water. The team created a new material that can use the entire spectrum of visible light to kill bacteria instead of just ultraviolet light, which dramatically speeds up the disinfecting process.

Another interesting project in this space is a product called Slingshot, which was invented by Dean Kamen. He originally created the Segway. Remember those?

The Slingshot is about 140 kilograms and stands about waist high. It doesn’t look like much, but what it can do is impressive. With about the same amount of energy used by a standard hair dryer, the unit can produce about 30 liters of clean water an hour. 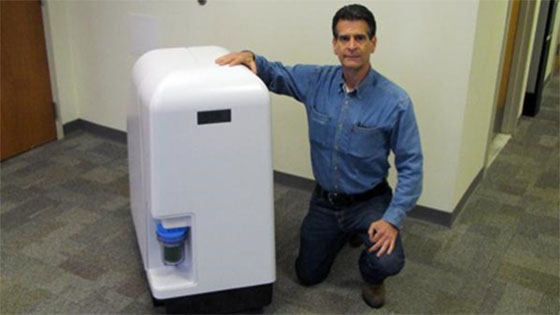 The Slingshot is small enough and cheap enough to get it to remote villages around the world. Kamen teamed up with Coca-Cola, which will help with the distribution and maintenance of the units around the world.

So to answer your question more specifically, the technology is actually here today and widely available.

What’s left to refine are improvements to the cost, the business model, and, hopefully, the sources of electricity required to run this technology.

Desalination at scale requires a lot of energy, and we’d obviously prefer that energy to be clean. After all, who wants to drive an electric car if the electricity comes from burning coal and natural gas?

How to allocate funds among our services…

Next, a reader wants to know more about portfolio allocation:

Hello Jeff, I am a very satisfied Brownstone Unlimited member and thought that someone might have asked this question by now. I know that you cannot give personal advice and that you recommend investing the same amount into each trade.

However, please give us an example across all of your publications of an amount that you might suggest investing into each publication. I’m just assuming that you would not recommend investing, say, $5,000 into each trade in every publication… that between publications the amount might vary.

I look forward to hearing your response. Thank you and your team for all your very in-depth research and hard work on our behalf.

Hello, Cynthia – I’m glad to hear you’re finding value in being a member of Brownstone Unlimited. And thanks for sending in your question.

As you noted, I can’t give personal investment advice. And asset allocation is a very personal matter, which means I can’t give specific guidance.

For example, one investor may be nearing retirement and aiming for more conservative or income-focused investments. Another might have decades of investing ahead of them and prefer higher-growth investment opportunities, or even some more speculative investments.

So I highly recommend investors work with a financial advisor who can help them consider where they are in life, their financial and investment objectives, their desired lifestyle, and other relevant factors when creating an asset allocation plan.

And remember – we will often want to shift our allocations over time as these factors change.

Of course, I have been keeping this concept in mind with our Brownstone Research services. I have designed my research to be complementary with basically no overlap. Each product is designed to give my subscribers access to a different investment asset class.

As I mentioned above, a financial advisor can help investors determine the right percentage to allocate to each of these services, but this general guidance should provide a basis for making those decisions.

I’m also actively working on new research products that will give my readers access to other asset classes. Over time, my goal is to create a complete portfolio allocation model.

And with The Near Future Report, Exponential Tech Investor, Early Stage Trader, and Blank Check Speculator, my recommendation for each individual portfolio is to build a basket of companies with roughly the same amount of money invested in each.

Remember – it doesn’t matter how many shares in a company you buy. What matters is the total amount invested.

Boosting our investments with warrants…

Let’s conclude with a question about the potential of warrants:

Can you give examples what kind of earning potential you have had with SPACs on their warrants? Just to have an idea of how much a person paid for a unit and how much the investor got paid on a warrant. I have no clue what earning potentials they can bring. Thank you.

Hi, Sandra. Thanks for being a reader. Warrants are new to many readers, so this is a great question.

As a reminder, a warrant gives you the right – but not the obligation – to buy a share of the stock at a certain price within a certain time frame (usually five to seven years).

When you “exercise” a warrant, you’re buying another share of stock from the company for a pre-determined price (often $11.50 for SPACs).

And this is one of the reasons SPACs can be exciting to invest in.

In my Blank Check Speculator service, we invest in SPACs by buying units. Within 52 days of when the SPAC itself goes public, these units can be “split” into shares and warrants. Each unit splits into one share and a fraction of a warrant. So by purchasing units, we gain two separate securities that we can profit from.

And when a SPAC merges with a private company, we still have our shares and warrants. But the ticker of each will change to the name of the new company (the warrants will often have a W appended to the ticker).

And the warrants are one way we can “turbocharge” our investment.

Then, in October 2019, he announced an exciting merger with Virgin Galactic Holdings, Richard Branson’s Virgin division that is bringing commercial spaceflight to the world. At that stage, IPOA filed to change its ticker to SPCE. And as we can see below, what followed was an incredible ride. 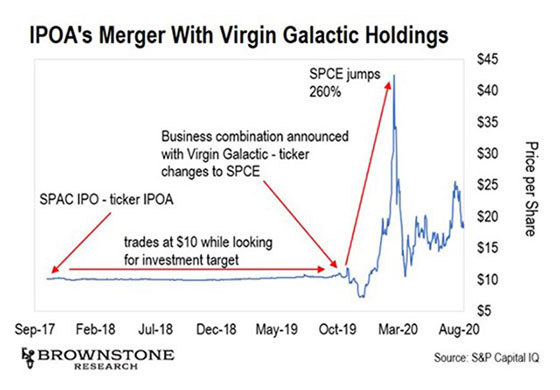 In the months that followed the reverse merger of Virgin Galactic into IPOA, the stock rocketed 260%. Investors more than tripled their money on the stock. 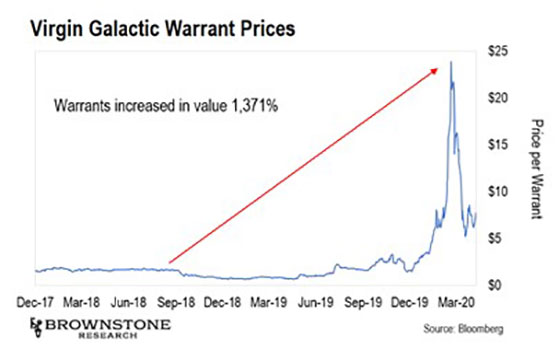 And that’s the kind of potential we have with warrants. Moves in the stock price can lead to even bigger moves in the warrants.

And Virgin Galactic wasn’t just a one-off. When the Diamond Eagle Acquisition Corporation SPAC announced its combination with DraftKings, its shares rose 329%… and its warrants rose more than 2,400%.

We’ve seen this pattern emerge many times, which is why our warrant coverage is such an important part of our strategy at Blank Check Speculator. This is where we will find our biggest gains.

Have a good weekend.