Today, Jeff explains why we need to develop new technology for EVs… and one of the biggest issues facing our current production of lithium-ion batteries…

What’s next for lithium-ion batteries? It’s one of the most popular questions I receive from readers.

EV batteries are a massive market. The market was estimated to be valued at $46 billion in 2021. By 2030, that number is predicted to be nearly $560 billion.

The current ones work, but they don’t last very long. And we can only recharge them a certain number of times before they must be replaced. They also tend to catch fire.

That last part is not hyperbolic… In August of last year, Chevrolet recalled tens of thousands of its Chevy Bolt EVs. A defect in the battery made the car susceptible to spontaneously combust.

Not good. There must be something better.

In 2021, the world produced 80 million vehicles. And that number will largely shift toward EVs over time.

What’s in the labs? What’s being developed and experimented with right now? And how will we face the most critical issues of the EV industry going forward?

EV sales have been fairly nominal in the grand scheme of the automotive industry for the last few years. Yet things surprisingly picked up in the middle of the pandemic in 2021: 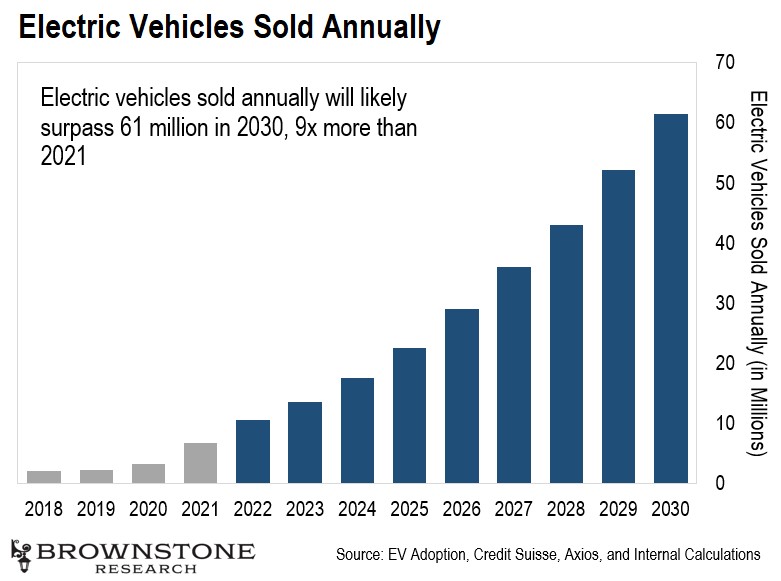 Tesla was smart. It put its supply chain agreements together in advance. It went so far as to buy lithium mines to ensure access to raw metal for battery production.

And by 2030, it’s estimated that more than 60 million EVs will be sold annually. Anytime we see this kind of growth, it presents a massive opportunity.

And there’s one dynamic to watch as this happens… 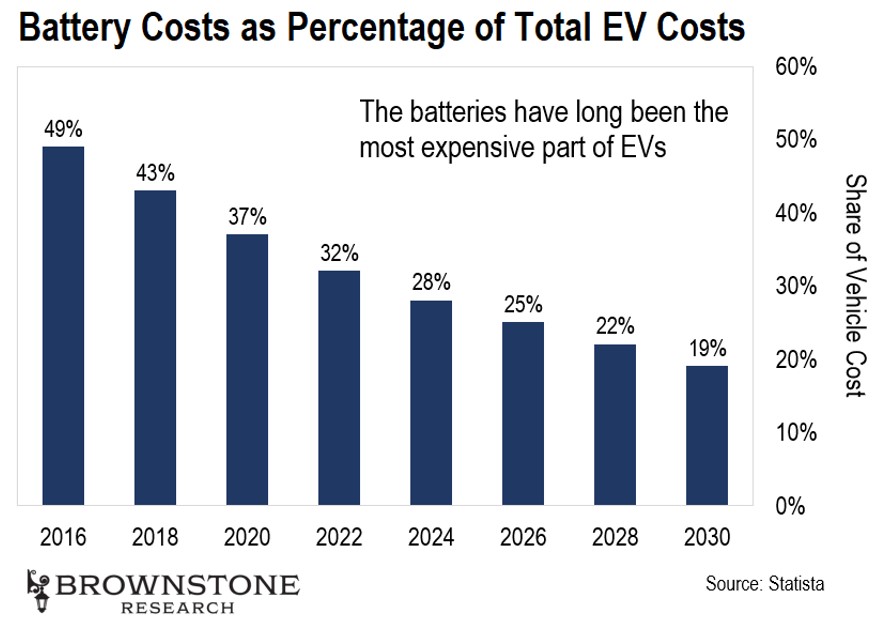 And if everything went perfectly, we might get that down to less than 20% of the cost of the car by 2030.

But the other factor that’s important to understand is the battery’s cost per kilowatt hour (kWh). Kilowatt-hour is a common unit of measurement for energy. The average U.S. home consumes 893 kWh per month.

And as the chart shows, lithium-ion batteries cost about $137 per kilowatt hour as recently as 2020: 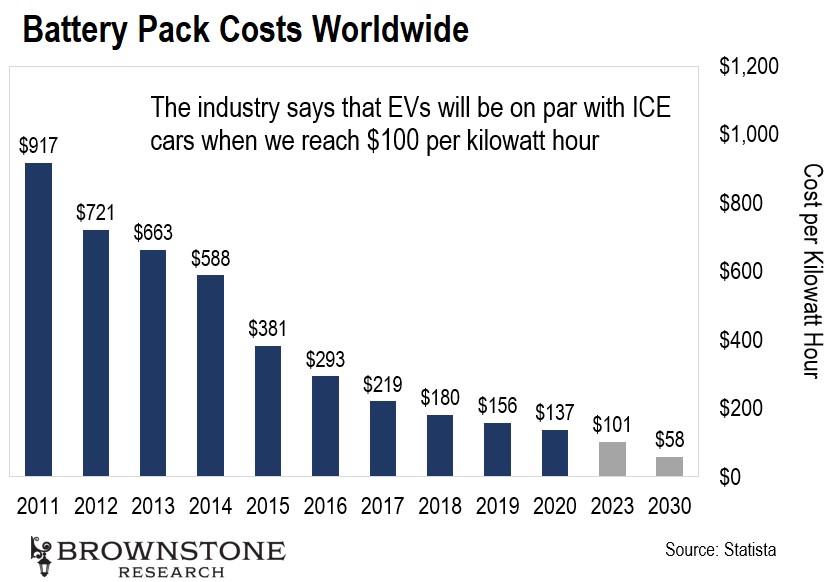 In order for EVs to be economically competitive with internal combustion engine (ICE) cars, the industry believes that number needs to come down to around $100 per kilowatt hour. (I actually think the correct number is closer to $80.)

From the looks of this chart, we might assume we’ll hit the important $100 per kilowatt hour very soon. By 2023, the metric is expected to fall to $101.

But there’s a problem with this projection…

The most recent forecasts are actually showing a cost increase in 2022: 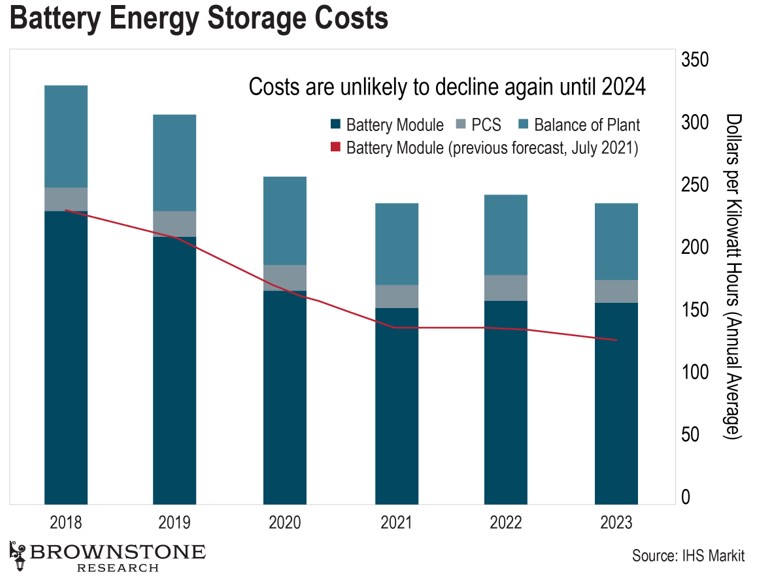 Why is that happening?

The answer is metals prices. They skyrocketed over the past year – particularly in the first quarter of 2022 – and disrupted all the previous projections for EV battery cost. 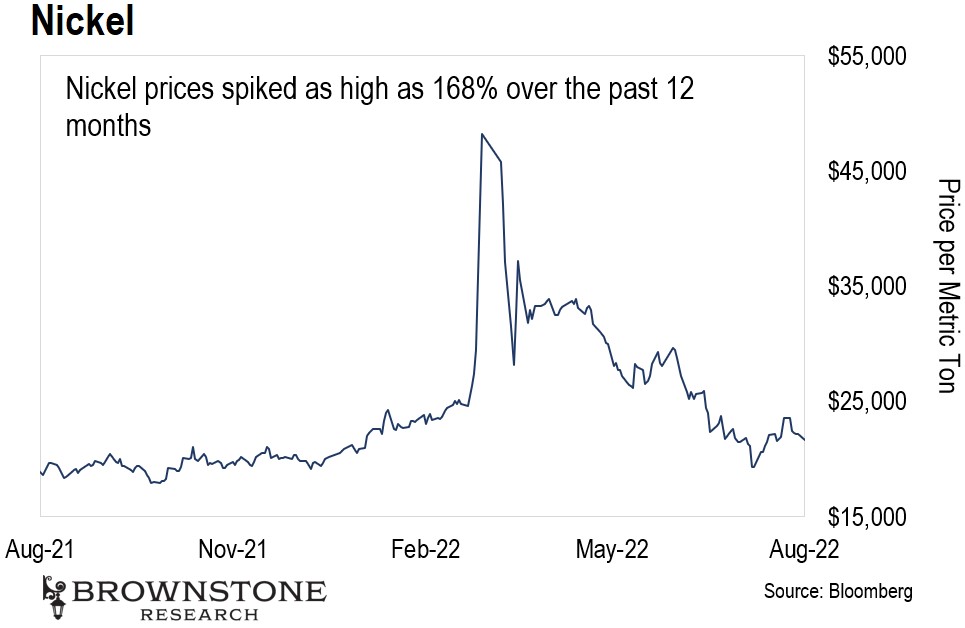 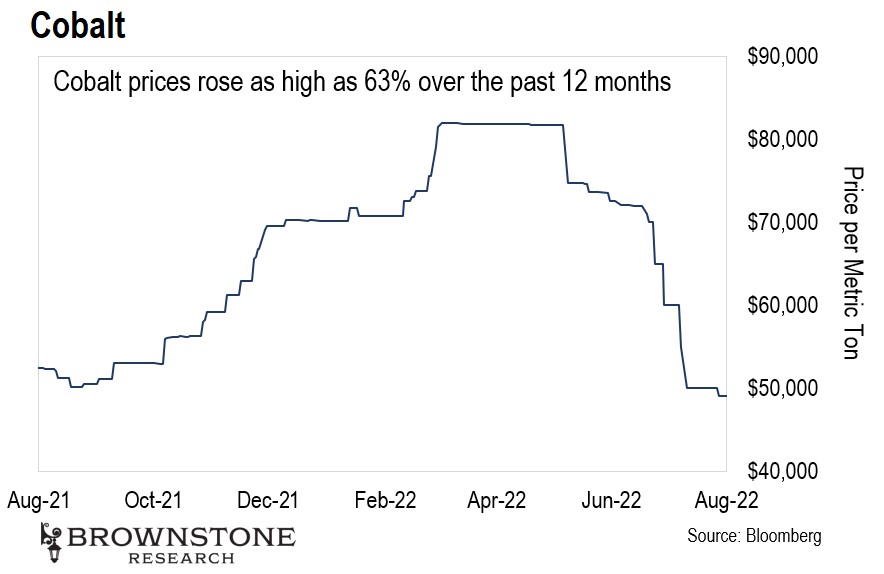 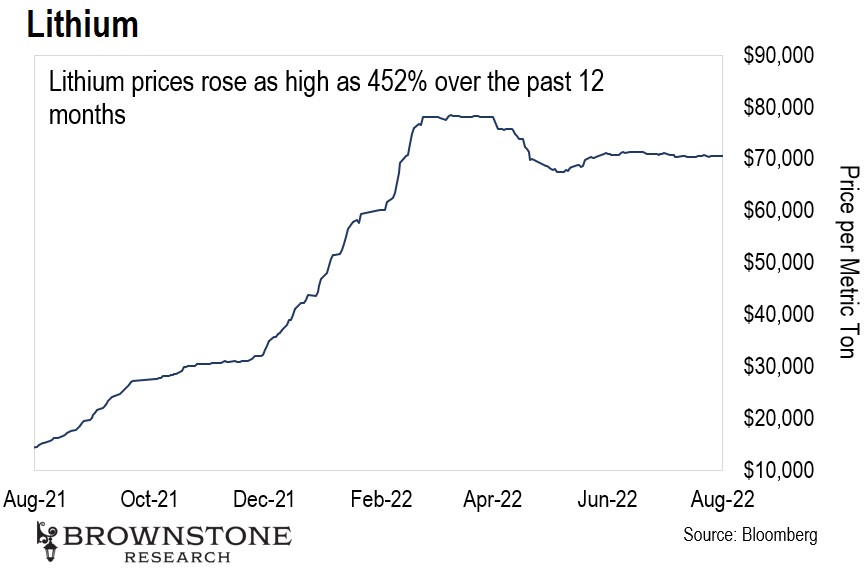 As we can see, the price of metals like nickel, cobalt, and lithium – all essential components in EV batteries – soared in the early part of this year. And despite cooling down in recent months, that’s going to push out many projections on EV battery costs for a couple of years.

We have some systemic problems in the market that must be addressed.

This is where Tesla was smart. Tesla engineered the majority of its cobalt out of its batteries years ago. It was a strategic advantage, and very few people understood how materially important that was.

Cobalt is a very expensive metal, and it’s controlled by dangerous countries. And Tesla recognized that and did something about it. They actually changed the chemistry in their battery to gain a competitive advantage in the marketplace.

To understand how serious this metals issue is, look at the demand: 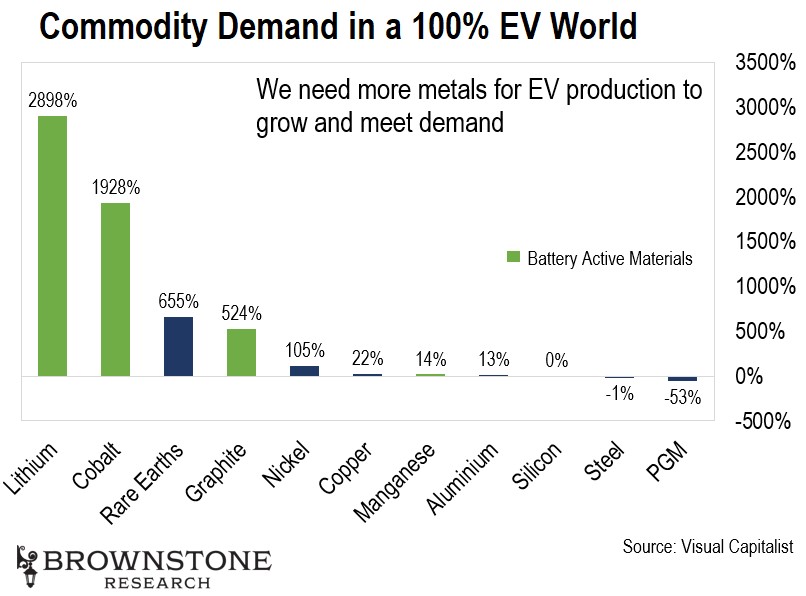 This is the incremental demand for the metal compared to a percentage of global production right now.

It’s such an easy visual that shows that the world has a massive problem. We need more lithium, and we don’t have the production capacity. So much of the industry is living off of metals that are in storage right now.

We’re utilizing those. Now we’ve got to go out and produce them if we want to come anywhere close to producing the EVs that are forecasted.

General Motors’ forecast for EVs is nonsense. In June, CFO Paul Jacobson said it was “several hundred thousand” cars short of where it would have been without the supply shortages.

It doesn’t have the supply agreements to have the raw materials to make its products. That’s how far behind they are.

But we read the mass media and see companies like this get attention for being “the number one EV car manufacturer in America.” And GM is not the only company struggling to get enough metals.

Ford just announced that it is raising the price of its electric F-150 Lightning by as much as $8,500 – mainly because of the increasing costs of commodities. And it isn’t giving any clues about how long customers will have to wait to receive their vehicles going forward.

You literally can’t have EV batteries without these materials. So we have a huge problem in the industry that we’ve got to solve.

But that’s not the only issue we need to solve regarding EV batteries. There are some fundamental design issues with our current lithium-ion designs. Tune in tomorrow for more on that…