Editor’s Note: In place of our usual Bleeding Edge topics, we’ve been unlocking premier paid content over the past week. And today, we continue with a look at one of the most important global concerns at the moment…

As longtime readers may remember, Taiwan plays a key role in a vital industry… and recent events are drawing attention to this island…

Last week, Nancy Pelosi’s trip to Taiwan put the tensions in that region of the world back in the spotlight.

China and Taiwan sit within 200 kilometers of each other (as seen below) – And China has long claimed Taiwan as part of its territory despite Taiwan’s independent governance. 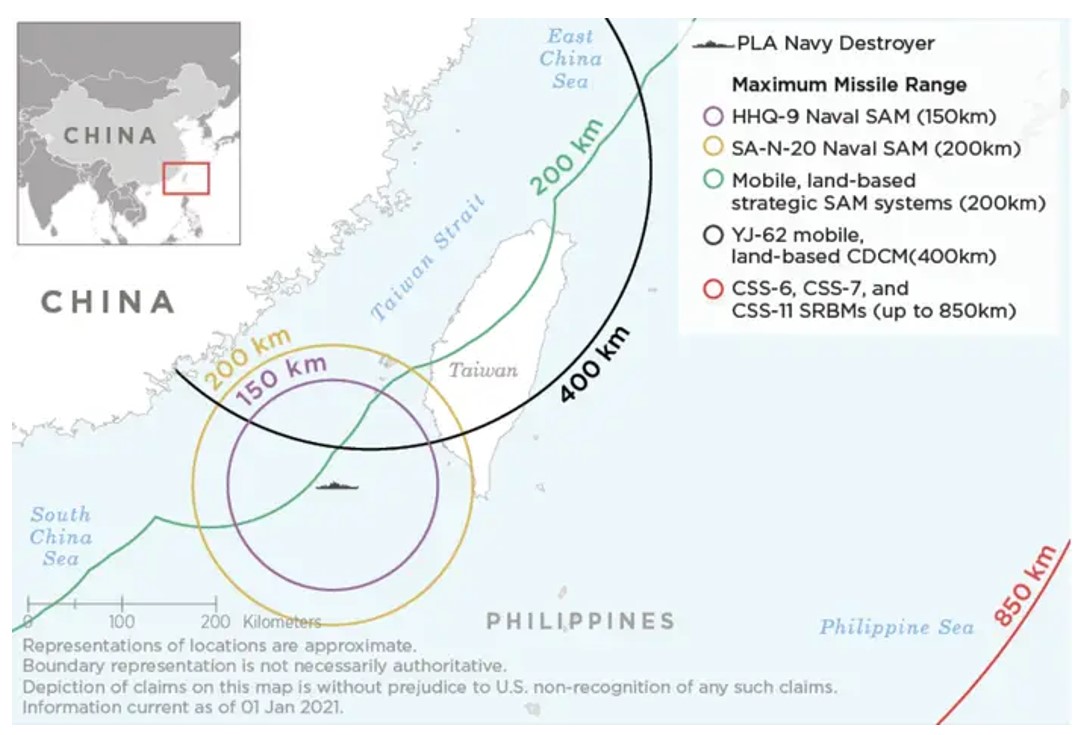 And there’s one critical reason this dispute should get everyone’s attention… As longtime readers may recall, Taiwan is the epicenter of the most advanced semiconductor manufacturing in the world.

Taiwan Semiconductor Manufacturing Company – abbreviated as TSMC – is one of my favorite companies.

It produces the most advanced semiconductors in the world, working years in advance. It is the most important company on the planet, but very few people even know it exists.

If China were to take control of Taiwan, it would create a massive global crisis.

Taiwan-based chipmakers like TSMC are responsible for the semis in almost all of our electronics – from medical devices and home appliances, to our cars and phones… and beyond.

This would give China the ability to control, alter, allocate, or completely stop the supply of key semiconductors in electronics that we use and need every day.

Now, some believe that Taiwan is fine. It’s very hard to land there… We’ve got all of these military installments… China can’t possibly breach Taiwan… 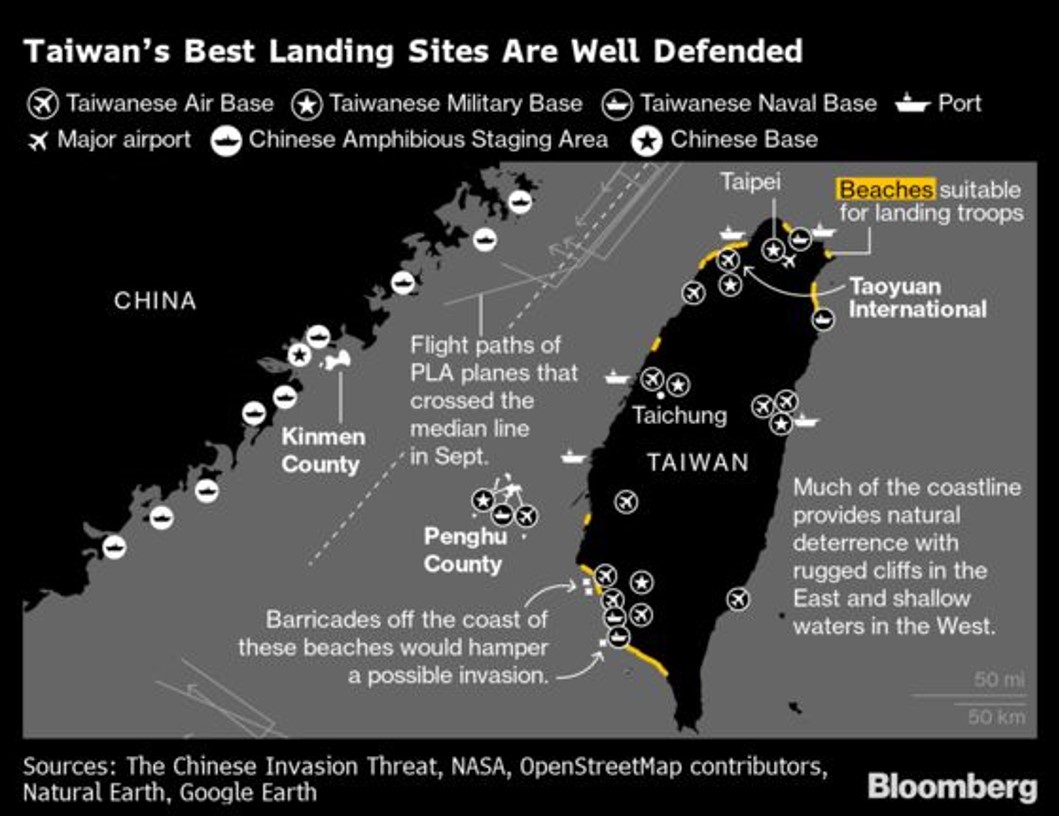 But when we think like a military strategist, we get a very different view: 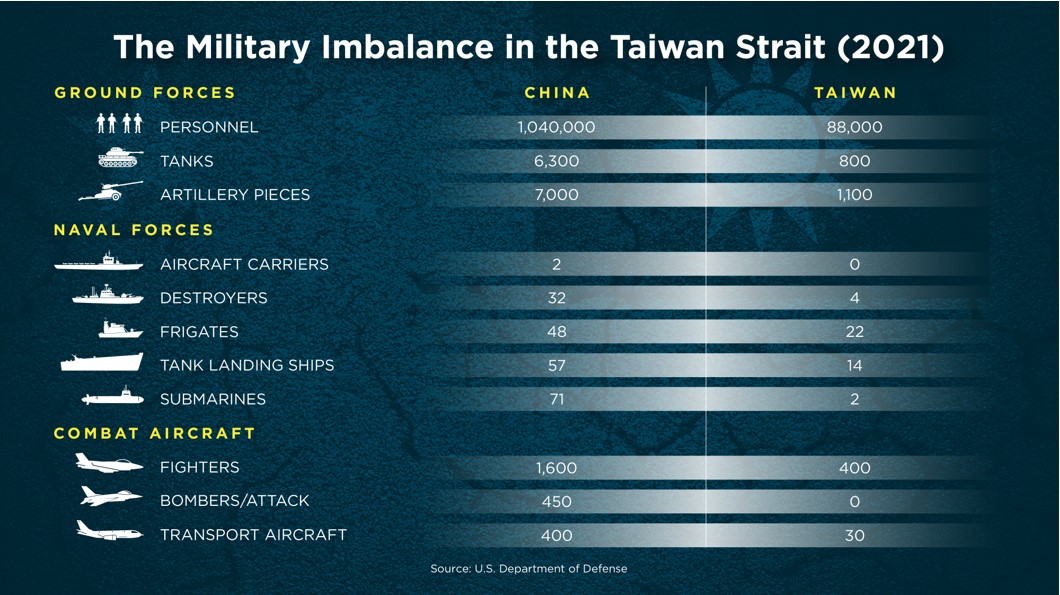 That doesn’t look too good…

But this is also a mistake.

The reality – and I’ve been to Taiwan more than 100 times – is that China is already there.

A Different Kind of Attack

China has been in Taiwan for decades. And they’ve been slowly building administrative control over Taiwan… just as they did for Hong Kong.

I was in Hong Kong when it was handed over from the British to China. The move was already in the works for decades. Many were fearful of what might come once the handover was complete.

Ironically, they were correct in their concerns. But they were wrong about the timeframe. China took more than two decades to slowly and methodically take complete control. This is a slow, methodical process that continues to unfold today.

China is brilliant at playing the long game. So it’s already happening in Taiwan whether we realize it or not.

It’s now just a matter of time until it asserts control. Any military presence will largely be just for show, and it will make for flashy headlines in the media.

But executives like me in the industry have known this, and we’ve been taking action.

And at the start of this year, it said it’s making a $100 billion investment in Ohio – the heartland. They want to build the world’s largest semiconductor manufacturing facility in cornfields.

This is not happening in Silicon Valley. This is extraordinary – and it’s the most exciting thing I’ve seen from Intel in a decade.

Likewise, Intel is also planning to build a $19 billion mega factory in Europe.

Samsung is planning to construct a $17 billion chip plant in Texas by 2024.

And returning to TSMC – it’s in the process of building a $12 billion in Arizona.

Why is TSMC building in the United States? Why would they do that?

Because they’re scared that they’re going to be taken over when China asserts control. They have to diversify their supply chain. They’ve got to bring its manufacturing onto soil where they know they can keep producing semiconductors and then ship them elsewhere.

It’s a serious problem. It’s also why TSMC is in discussions to build a multibillion-dollar manufacturing plant in Singapore, and another in Japan.

Another company, Micron, is looking to spend as much as $40 billion in either Arizona or Texas.

ON Semiconductor, GlobalFoundries, and Akoustis – among others – are likewise making moves to expand and upgrade their facilities.

Policy and legislation is finally moving in the right direction on this subject.

Both the House and the Senate approved the CHIPS Act at the end of July. This will be a boon for U.S. manufacturing, as it offers great incentives for expansion and research.

This bill is long overdue. As we’ve just seen, the global architecture for manufacturing has been shifting from centralized to decentralized for years now, and the pace is picking up.

The cost advantages of manufacturing in mainland China have narrowed. And the importance of secure supply chains for critical components has never been better understood than it is today.

Another group of policymakers has proposed the FABS Act, which would offer tax credits for constructing and upgrading semiconductor manufacturing equipment. This is actually smart legislation – and it incentivizes the right behavior.

But the key point is, all of those announcements – for investment I mentioned above – happened before the government offered up anything.

The industry has been on top of this for the last decade.

China still poses a big threat to Taiwan – and through it, a threat to the world.

But as we can see, the industry – and now the government – isn’t sitting on its heels. We’re going to see more announcements of new fabs in the U.S. and around the world in the near future.

While it will take time for the industry to adjust to this new dynamic and build out the necessary infrastructure, we’re on the right track.

And in the meantime, the money flowing toward the semiconductor industry will prime a number of our investments in this space going forward…

Editor’s Note: The semiconductor shortage this year has hit the automotive industry hard. And that’s impacted one important trend we’ve been following in these pages… electric vehicles.

Tomorrow, we’ll share some of Jeff’s insights on one of the biggest problems facing the EV market now…