To understand what a dominant logistics force Amazon has become in the U.S., we only need to look at one chart: 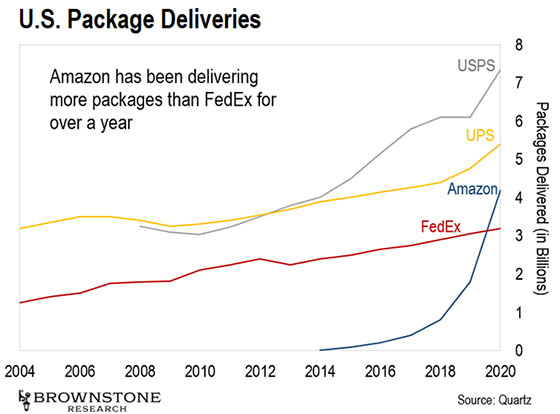 Seemingly out of nowhere, Amazon overtook FedEx more than a year ago. What’s more remarkable is how quickly it happened.

Amazon only entered the logistics business in early 2014. It learned a hard lesson after the 2013 holiday season, when it saw that companies like FedEx and UPS simply couldn’t keep up with its package volume.

Its market share at the time was inconsequential – just a fraction of a percent of the total market. But in the span of less than six years, it has become a giant. And it’s now delivering about two thirds of its own packages.

And given the amount of investment that Amazon has made in logistics in the last 12 months, I wouldn’t be surprised at all if Amazon hasn’t already taken over UPS in shipment volume. With each month that passes, Amazon relies less and less on the U.S. Postal Service (USPS) and UPS for package delivery.

In terms of revenue, Amazon’s logistics business might appear small, however. Amazon Logistics only gets “paid” by Amazon about $4.28 per package delivered. This is a fraction of what UPS generates ($12.19) or FedEx ($17.95).

One might think that’s bad business for Amazon, but I see something very different. With Amazon’s increased levels of investment in logistics infrastructure and incredible growth profile, there is a far bigger play here.

I predict that within 12 months, Amazon will start to deliver packages for third parties – not just for itself. And it will do this in a way that disrupts the entire logistics industry.

I believe that Amazon will enter the market at delivery rates that are going to be about half of what FedEx charges and at least 30% less than what UPS charges.

Even at these discounts, it will be doubling the revenue per package that it currently receives from Amazon, and at the same time it will be providing a faster and more reliable delivery service. Once Amazon launches its logistics service for others to use, it will become a multibillion-dollar business overnight.

UPS and FedEx are in trouble, as Amazon’s Logistics network will become arguably a more critical piece of infrastructure than the USPS itself.

Before we jump to our next topic, I have one more reminder…

On November 17 – next Wednesday – I’ll be unveiling my first-ever product reaching into the private investing space. It’s the culmination of six-plus years of hard work… searching for the best way to bring early stage private deals to my readers.

I know from personal experience how profitable private investments can be. I’ve invested in over 260 of them myself. And they’ve brought me returns into the thousands of percent.

Even better, just a small investment can bring life-changing returns. A $500 investment in Uber back in its earliest days would have brought you nearly $2.5 million.

And the best part of my new service is… anyone will be able to take part. You don’t have to be an accredited investor… or even have a certain amount of capital to spend. Like I just shared, even $500 can bring amazing returns.

So if you haven’t yet signed up to attend, please don’t hesitate. Go here to reserve your spot right now. I’ll share important details about why I’m unveiling this service now… the kind of mindset we’ll need to have as private investors… and how the process all works.

First, a user allows the app to take a biometric scan of their face. That creates a profile. Then they can associate their contact information with the new profile. This could be a phone number, email address, and/or a social media account.

Once people have created their FaceTag profiles, it makes sharing contact information seamless. If one FaceTag user meets another, all they have to do is scan that person’s face with the FaceTag app, and it will transmit all of the contact information associated with that person’s profile. Punching in phone numbers or email addresses would become a thing of the past.

Of course, this is a terrible idea when it comes to privacy. I would not recommend anybody sign up for this.

At the same time, I can see how this could catch on. It would start with the younger generations and grow from there. It’s a story that sounds eerily familiar…

If we remember, Mark Zuckerberg was a Harvard undergrad himself when he developed “The Facebook.” The whole idea of social media was incredibly novel at the time. And people did not realize that they were handing over all their sensitive data to Zuckerberg the moment they signed up for an account.

By using the Facebook application, a user consented to allow Facebook to do what it wanted with their data.

And remember, this platform was only available for Harvard students originally. Then Zuckerberg rolled it out to all college students across the U.S. Only after it caught fire on college campuses did Zuckerberg make Facebook available for general use.

In just the same way, Chow is exclusively rolling out The FaceTag to Harvard students first. But I have no doubt it will soon be available on college campuses across the country. If it catches on, watch out. This could very well become the next Facebook.

So we’ll be keeping a close eye on The FaceTag… But hopefully, we won’t allow our faces to be “tagged.” While I have deep concerns about the privacy aspects of a platform like this, I can’t deny that the app could very well go viral.

We have talked about the rise of the metaverse quite a bit recently. And today we have yet another exciting project to discuss.

For the sake of new readers, the metaverse refers to a virtual world in which people can meet and interact with one another. But there won’t be just one. There will be many different metaverses to choose from. In fact, there already are…

And the new metaverse we’ll highlight today is called Parallel. It’s a play-to-earn game based on non-fungible tokens (NFTs).

When it comes to the play-to-earn model, the NFTs have utility inside the game itself. This creates an economic incentive for players. They can make money while playing the game by acquiring and trading the best NFTs.

As for Parallel itself, the theme is a lot like that of a metaverse game we talked about recently called Ertha. It’s set in a post-apocalyptic environment where people have taken to space in order to flee Earth. In the game, humans have become a multi-planetary species.

But here’s the thing – we don’t know much about the game mechanics. That’s because the metaverse doesn’t exist yet. Parallel still needs to be built.

Despite this, the team just raised $50 million in an early stage venture capital (VC) round. The company is now valued at $500 million.

Let’s think about that for a second…

Here we have a company that hasn’t done anything except communicate its idea for an NFT-based metaverse and create a few NFTs. Almost nothing has been built yet. Parallel is largely just an idea.

Yet the company is now worth half a billion. What has happened is that the early stage funding model has been flipped on its head.

It used to be that companies could not raise a large VC round until after they had delivered a product prototype, proved that it worked, and demonstrated that there is interest for it in the marketplace. That’s the exact opposite of what just happened with Parallel.

This is just more proof that NFTs and the metaverse trend are gaining momentum. Investors in this space know that creative ideas with the right economic incentives built in can grow incredibly fast once they go live. And as we have seen, VCs are willing to invest a lot of money in these ideas.

So we will add Parallel to our list of metaverses to keep an eye on. This one has a lot of potential. In fact, one of its first NFTs just sold for over $1 million.

And for readers interested in how to invest in private companies like Parallel before they go public, be sure to tune in for my Day One Summit next week.

That’s when I’ll reveal the details around my new research service focused exclusively on private investments… so we can invest just like the venture capitalists. Just go right here to reserve your spot.

We’ll wrap up today with an interesting and somewhat odd development out of the Allen Institute for Artificial Intelligence (AI). It’s an AI prototype designed to determine whether a given action is moral or immoral.

The AI is named Delphi after the ancient Greek Oracle of Delphi. And it works much like OpenAI’s GPT-3.

For the sake of new readers, GPT-3 is an AI-enabled text generator. Users can give it a topic to write about and GPT-3 will type a short story, an article, or even a technical manual, depending on the topic.

In just the same way, users can ask Delphi ethical questions to get an answer. Here’s a visual example:

Here I asked Delphi if it was okay to park in a handicap spot even though I don’t have a disability. And in no uncertain terms, Delphi told me this would be wrong.

Of course, the AI isn’t perfect. According to the Allen Institute, Delphi has demonstrated an accuracy of about 92% as judged by humans. And it’s still a work in progress.

As such, users must agree to a disclaimer that says Delphi’s answers may occasionally be inappropriate or even offensive.

Still, this is a huge development. And it was inevitable that something like this would be developed.

When we think about all the posts and comments made on social media platforms all day, every day, it’s easy to see how an AI-enabled oracle like Delphi could be deployed to support or condemn certain questions and answers.

This technology could potentially be used to filter information on the internet deemed to be unethical or morally wrong. Naturally, if an AI like this were completely unbiased, there could be great utility in technology like this.

But we should remember that an AI is trained on data provided by humans. And if those humans have a strong bias, the results can be disastrous.

It could result in something that is far worse than the politically-driven censorship, banning, filtering, and manipulation that we have seen over the course of the last two years. This is my greatest concern.

Right now, the Allen Institute has enabled users to share Delphi’s answers on Twitter. I’m very interested to see how much farther they take it. And it will be interesting to see if public and private organizations start to employ this technology.