The headlines in the news are declaring today to be a historic day for bitcoin. I’ve seen headlines like “Bitcoin Comes to the Big Board,” “First Bitcoin ETF Begins Trading,” or “First-ever U.S. bitcoin ETF launches Tuesday.”

But before we rush out and buy some shares, there are a few important things to understand. The exchange-traded fund (ETF) isn’t what the headlines might have us believe.

The ETF in question is the ProShares Bitcoin Strategy ETF, which was recently approved by the U.S. Securities and Exchange Commission (SEC). The ticker symbol for the ETF is BITO.

That said, if any investor wants to buy bitcoin, this is not the way to do it. As the name of the ETF suggests, this is a bitcoin futures ETF. It is not a bitcoin ETF. What’s the difference?

BITO is a strategy-based ETF that does not buy and hold bitcoin. If an investor buys BITO, they are not gaining direct exposure to the underlying asset bitcoin.

In the case of this ETF, the strategy is to purchase bitcoin futures that are traded on the Chicago Mercantile Exchange (CME). This is a trading instrument, not an investing instrument.

The problem with an ETF like this is that things have to be going really well with the underlying asset for the ETF to increase in value. In other words, bitcoin has to be consistently going up and to the right for the price of BITO to consistently rise.

The other problem with the futures strategy is something called “contango.” This is a normal situation where the futures price of an underlying asset is higher than the spot price. For an asset like bitcoin, which usually has an expectation that it will go higher over time, contango is normal.

And the problem here is that when contango is normal, it typically results in losses in a futures ETF.

There are only limited periods of time when the price of bitcoin rises fast enough and in exactly the right time frame to increase the value of the futures contracts above and beyond the premiums to purchase those contracts in the first place. Said another way, bitcoin can rise, and we can still lose money in this ETF.

We all wanted a bitcoin ETF that would hold and custody bitcoin, which would have made it simple and easy for all investors to gain access to this exciting asset class. And what the SEC gave us is a highly risky ETF that we can all access, very few will actually understand, and in which everyone will likely lose money.

The chair of the SEC, Gary Gensler, virtue signals that he and the regulators are trying to keep normal investors all safe, which is why a normal bitcoin ETF hasn’t been approved. Yet the approval of BITO has done exactly the opposite.

My humble and very general advice… Unless you understand exactly how this kind of futures strategy works and can precisely time the bitcoin markets, I recommend staying away from this ETF.

If anyone wants exposure to bitcoin, simply purchase it on an exchange like Coinbase or Kraken, or on your Cash App, Abra, or PayPal.

The next generation of satellite communications…

We’ll start today with an incredible technological development. An early stage company called Lynk just demonstrated technology that allows normal smartphones to communicate with satellites… without any modifications to the phone at all.

As regular readers know, I was living and working in Japan during the massive 9.2 magnitude earthquake that rocked Tokyo, caused a massive tsunami, and resulted in not one, but three nuclear reactors melting down in Fukushima. It was an almost unthinkable scenario that I wouldn’t have ever imagined.

As the president of my business and someone responsible for more than 100 employees and their families at the time, I was thrust into crisis management mode. It was one of the most formative experiences of my life that has had a permanent and positive impact on who I am as a person.

Immediately after the earthquake, the wireless networks fell over. They completely went down, and no one could make any phone calls. The only thing that would work was landlines. I immediately had three satellite phones shipped to me. I kept one in my Osaka office, one in my Tokyo office, and the third on me at all times.

And here’s the thing – those “sat” phones were big and bulky. Using one was almost like holding a brick up to your ear. It wasn’t easy or convenient to carry those things around every day. They had a big folding antenna as well. They were very expensive and had equally expensive monthly plans, yet they were necessary to communicate during the emergency.

That’s what makes Lynk’s breakthrough so incredible. This company has taken the “anywhere” connectivity of a satellite phone and enabled it on an everyday smartphone.

Lynk’s technology can only support text messages right now, but it eventually aims to facilitate phone calls and “broadband speeds.” No cell phone coverage or Wi-Fi access is required.

And there’s another layer here that excites me as a technologist. Lynk’s technology works even though its satellites are not geostationary. They are constantly in orbit, coming into and out of range. That’s a tough problem to solve when it comes to communications. Yet this early stage company figured it out.

Lynk’s goal is to launch roughly 100 of its small, 1 meter × 1 meter satellites into orbit. The company worked with SpaceX to launch its first satellite on the Falcon 9 Heavy Rocket. I expect Lynk will use SpaceX for its future launches as well.

With 100 of these satellites in orbit, Lynk would be able to provide global coverage every five to 20 minutes. In other words, there may be a five- to 20-minute delay between sending and receiving messages, but everyone on the planet would have access to Lynk’s network.

And the company eventually aims to have as many as 5,000 satellites in orbit, which will provide much smoother coverage.

This will be an incredibly useful service. I know firsthand how vital communication is during times of emergency. Plus, Lynk could provide reliable communications to anybody living or traveling in remote areas.

This is an exciting company to watch, and it’s one that I hope Bleeding Edge subscribers might be able to benefit from.

I’m sure Lynk will be able to raise a large chunk of capital on the back of this big announcement. That will help fund the satellite network and get the communications service built out. Then Lynk will quickly be ready for commercialization.

We are entering the age of the metaverse…

Blockchain-based game Axie Infinity is now providing us with a view of the future. It’s a world dominated by metaverses. These are virtual worlds in which people can explore and interact with each other through a customized digital avatar.

We talked about Axie Infinity back in August. To bring new readers up to speed, it is a game built on non-fungible tokens (NFTs) and Axie’s native token AXS. This masterfully brings economic incentives into the Axie Infinity metaverse. 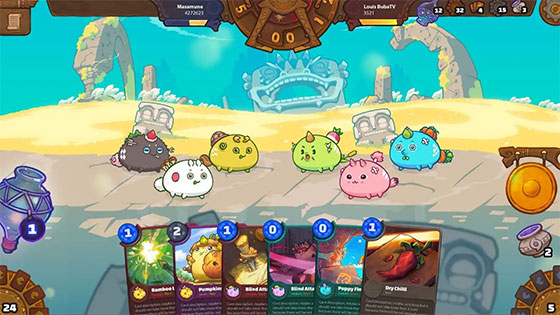 Players earn AXS tokens as they win battles and accomplish tasks in the game.

In addition, the more AXS players earn, the more NFTs they can buy. These NFTs can also be sold on the secondary market to other players. That’s another potential income stream.

Putting it all together – the more people who play the game, the more the price of AXS and the in-game NFTs will increase in value. It’s a virtuous cycle of sorts. The more players play, the more they earn, and the more valuable their cryptocurrency and NFTs become.

And this economic model has been an incredible success.

Axie Infinity is now generating $1.5 billion in annual revenue. And the AXS token has absolutely exploded. The token was priced at $0.60 at the start of the year. Today, one AXS trades for about $121. That’s a 20,000% gain year-to-date.

And AXS now commands a $30 billion, fully diluted market capitalization. That puts it on par with well-known companies like Southwest Airlines, Fifth Third Bank, and Equifax.

But here’s the thing – this incredible success has pushed the price of AXS tokens and Axie Infinity NFTs so high that many people can’t afford them. It’s too expensive to buy the tokens and NFT gear necessary to start playing the game.

The market has responded to this economy problem by creating “guilds.” These guilds pool Axies and NFT gear. And they are renting them out to new players who are just getting started in the game. In return, the renters share the revenue they earn while playing the game with the guild.

That dynamic itself is fascinating. And it gets even better…

Many players in Southeast Asia – namely, Vietnam and the Philippines – are now earning enough money in Axie Infinity to make it their primary source of income. That’s right – some people have made it their job to work in the metaverse. That’s where they are spending most of their time.

I know that’s hard to believe. But it shows how the right micro-economic framework can lead people to choose the metaverse over real life. This is a view on the future.

There are many exciting metaverse projects in the works right now in addition to Axie Infinity. Some of these new metaverses will reach a tremendous scale, and we will get to the point where a lot of people are spending their days inside a metaverse.

I know that’s a troubling concept in many respects. But the trend is growing at an exponential rate right now, and it can’t be stopped.

Welcome to the world of metaverses…

In something of a surprise development, Ripple just announced a $250 million NFT fund. It’s calling it the Creator Fund. And its focus will be to encourage creators, brands, and marketplaces to operate over Ripple’s blockchain.

As a reminder, Ripple is one of the blockchain industry’s biggest success stories, even with the recent challenge by the SEC. It has spearheaded what is arguably the largest commercial adoption of blockchain technology and digital currency on the planet.

And Ripple’s latest move comes on the back of its strategic investment in a small NFT marketplace called Mintable. Mintable will be one of the first companies to bring NFTs to Ripple’s blockchain.

Well, those same properties could be very useful for NFT transactions as well. Most NFTs run on Ethereum’s blockchain currently, and Ripple can facilitate transactions cheaper and faster than Ethereum can right now.

This is an interesting move, and I can see why Ripple felt this was strategic. As we know, the NFT trend is absolutely booming. There are so many exciting things happening with NFTs right now. We are talking about it several times a week.

And if Ripple can capture some of that market share, it would be very bullish for XRP. In fact, XRP jumped about 16% on this news. I’m curious to see how much adoption Ripple can get when it comes to NFTs.

I’ve been helping my readers gain exposure to some of the best opportunities in this space. If you haven’t yet checked out my latest research, then I’d encourage you to go right here for all the details.