One of the most interesting dynamics in the initial public offering (IPO) markets over the last three years has been the expansion of valuation multiples.

This has been especially true in the software industry. 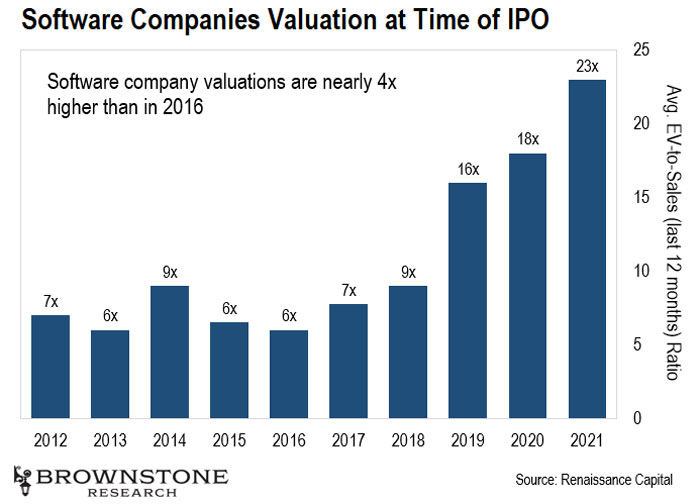 Back in 2015, when I wrote my very first issue of Exponential Tech Investor, the enterprise value (EV) to last 12 months of sales at the time of a software company’s IPO was around 6. And then, as the economy strengthened, the multiple started to tick up to 18 by 2020…. In the middle of a pandemic, nonetheless.

It seems counterintuitive of course. Yet it makes perfect sense.

Two things happened at the same time. Software companies, after a decade of development, have radically improved the user interface and ease of use of their products – the adoption and implementation of software became far simpler. This reduced the barriers to adoption.

And the pandemic accelerated the need for software to better empower us all to work more efficiently in a distributed environment.

Take Gitlab (GTLB) as an example. It was an exciting IPO from last week. The company is a web-based open-source platform used for software development operations (DevOps). The IPO was on Wednesday and the company now trades at a $15 billion valuation.

Who says open source can’t be worth a fortune?

But the past is the past… We look to the future.

If we assume Gitlab grows its revenue by double this year to $300 million, we arrive at an EV/fiscal year 2022 multiple of 50. Still too rich for me… but clearly a sign of how much thirst there is out there for exciting, high-growth companies like this.

And the great thing is, with a little patience, smart investors will have their chance to invest. All it takes is one earnings estimate miss or the delay of a new product launch to cause something that is richly valued to become attractively priced.

With a record year for technology and biotechnology IPOs, our field of investing is much larger than it has ever been. And the companies that are now going public were almost all born after the financial crisis. They are the new breed of digital-first companies without any “analog” baggage.

And that means that they are primed for exponential growth.

Another couple billion users are being introduced to NFTs…

NFTs are digital collectibles I’ve recently written a lot about in The Bleeding Edge. They are smart contracts that not only represent a digital piece of art or a digital sports trading card but can also confer benefits to their owners.

We wrote about Twitter’s foray into NFTs earlier this month. The social media app will allow users to authenticate an NFT displayed as their avatar – similar to how the blue checkmark by a name demonstrates a user is who they say they are.

Now we’re seeing TikTok – the first social media app not owned by Facebook to have over three billion downloads – jump into the NFT space with their most recent news.

The company partnered up with popular creators, celebrities, and online personalities like Lil Nas X, Bella Poarch, and Grimes to release NFT collections. They are called TikTok Top Moments, which are described as “culturally significant” TikTok videos.

The first NFT to list was a video of Detroit rapper Curtis Roach using a table and his hand to make a beat for his lyrics of “Bored in the House.” The original video was released in the early days of the COVID-19 lockdown and launched the rapper into stardom.

Here’s a clip of the NFT:

At the time of publishing, the highest bid for the NFT is 28 ETH, or approximately $107,718.80. With more auctions to come, we are likely to see even higher figures.

The majority of the proceeds will go to the creators, which makes these NFTs a great way for users and creators to monetize their work on the TikTok platform.

This is a much different model than what we see from Facebook, YouTube, and Google, which generate revenue by collecting and monetizing its user’s data in order to sell targeted advertisements.

Also interesting here is that these TikTok NFTs are being launched in collaboration with an Ethereum scaling solution called Immutable X.

The Immutable X project is rather young and calls itself the first Layer 2 for NFTs built atop Ethereum. Ethereum is known as a Layer 1 protocol, and solutions that improve its ability to handle more transactions or reduce fees like Immutable X are known as Layer 2s.

Ethereum itself has witnessed an explosion in usage in 2020 and 2021. This usage has caused transaction fees to explode, and the network has been congested. The fees are so high that many smaller transactions simply don’t make sense.

To help Ethereum handle the immense traffic and reduce transaction costs, Layer 2 solutions are built to offer users a way to transact with Ethereum-based assets for less. And Immutable X looks to be the home for NFTs built on Ethereum.

What is clear here is the NFT trend is only accelerating. TikTok is now the newest mainstream application to integrate them in some capacity.

I expect to see more newsworthy events like this in the coming months.

As far out as it seems, it was bound to happen… A gas station in space.

Its focus is on enabling satellites to refuel in space. Satellites require propellant in order to reposition themselves into the correct orbit.

Orbit Fab had previously launched a much smaller version of its tanker as a proof of concept. And now it has announced that it’s ready for the real thing – a large tanker that will be able to store fuel for 15 years.

Here is what the tanker will look like in orbit…

The tanker will be launched into space aboard a SpaceX Falcon 9 by early 2023. And its journey will be unique.

In order to get into the right orbit, it will fly around the back of the Moon before returning to Earth’s orbit. There, the tanker will be positioned in a geostationary orbit. This means that the tanker will move at the same speed as the Earth’s rotation.

Sitting at this high of an altitude means the tanker will stay out of the way of most orbiting satellites. When needed, it can drop down to deliver fuel before returning to a geostationary orbit.

The launch of the fuel tanker is a symbolic moment that represents that the space economy has reached the scale where this kind of fueling station makes sense.

Fueling stations like this are a key piece of space infrastructure. Once in place, they will reduce the need for spacecraft to be designed to carry large amounts of propellant. This will reduce launch costs and it will extend the life of satellites in orbit.

This is a great development.

Next up will be our planet’s first space hotel designed by Philippe Starck and launched by Axiom Space. This collaboration was announced in 2018 and is being built right now by Axiom and is scheduled for launch in about two years’ time.

The race to progress from smart glasses to augmented reality (AR) glasses continues to heat up.

Nreal is an augmented reality glasses maker I’ve been tracking for a few years now. In 2019, it introduced its “Light” smart glasses at the Consumer Electronics Show (CES) in Las Vegas.

These glasses were a significant jump in technology, enabling augmented reality experiences for users wearing them. A wearer could watch videos or even interact with virtual images.

The glasses themselves were lightweight, coming in at 100 grams. For comparison, your standard Ray-Ban Original Wayfarer weighs 45 grams.

Nreal is now advancing its technology and introducing even more powerful smart glasses that weigh only 77 grams. They are called Nreal Air and are similar to regular sunglasses. The lower weight means users won’t experience discomfort over long periods of time.

The company states the glasses come with the best display on the market and other high-tech specs that are yet to be revealed.

Here is a preview of the glasses: 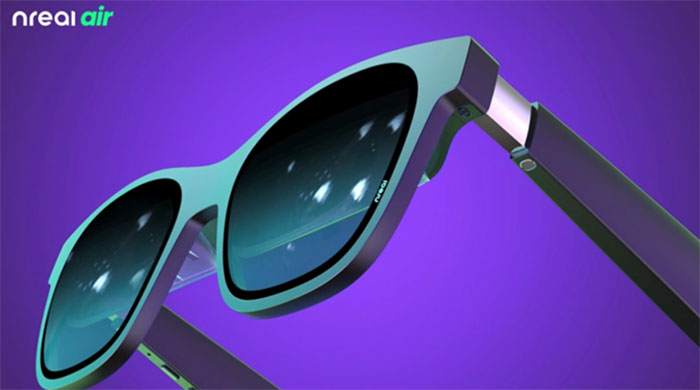 While I’m sure the technology will likely compete with other smart glasses like Facebook’s, what I like about Nreal’s approach is it adapted its glasses to what the company learned over the last two years.

It originally thought the glasses would be used more for productivity.

However, it discovered – and admitted – the truth… Users wore them for entertainment. I’m sure at least a few of us could have figured that one out…

Wearers can stream videos and watch Netflix with the lenses. These smart glasses are also tethered to the user’s iPhone or Android device and can integrate with phone apps.

I expect the user interface of this new version to be similar to what we experience with smartphones. This will make the glasses a complement to the smartphone we rely on daily.

The cost, while not stated, will almost certainly be sub-$500. That’s an attractive consumer price point for mass adoption. The initial release will be in China, Japan, and South Korea before the end of the year.

The Nreal glasses are just one more major product release in the early stages of augmented reality.

Next year, I expect to see a massive upgrade in terms of technology. That is when 3D depth perception – thanks to lidar technology – will really allow for depth sensing… the last needed step for full augmentation.

In the coming months, I imagine we’ll see a wave of announcements for product releases that harness the full capabilities of AR technology and smart glasses.