Tonight’s the night I go live with my confidential briefing. It’s all about what Apple is up to right now, and why we as investors need to be paying close attention.

To the point – Apple’s new launch event is going to trigger a $12.3 trillion opportunity. This is the kind of industry-changing event that has only happened twice in the past two decades.

Investors like Warren Buffett, Mark Cuban, and Elon Musk are already positioning themselves to capitalize on what’s about to happen. They see it coming… and so do we.

Tonight, I’m going to share with viewers how we plan to profit from Apple’s market-moving actions here at Brownstone Research. And I will even reveal my No. 1 tech stock for the rest of 2021 tonight as well. It will be a free recommendation for all attendees this evening.

There’s a tremendous opportunity hiding in plain sight right now, but it won’t be hidden for long. Let’s make sure we act quickly.

Readers can go right here to reserve a spot and get more information on the briefing. I look forward to seeing you tonight.

Amazon just took the final step with its cashier-less technology…

As predicted, Amazon just announced that it will roll out its newly named “Just Walk Out” cashier-less technology across its Whole Foods Stores. This is exciting news.

The rollout will enable consumers to walk into Whole Foods, scan their palm or a bar code on their phone, load up their cart with groceries, and then leave the store. When they walk out, their Amazon account will automatically be charged for the products they took with them. How’s that for convenient?

Here’s a look at the palm scanner to get in. It’s completely contactless. It doesn’t require touch at all:

We have been tracking Amazon’s progression with this cashier-less technology for a few years now. It’s been interesting to watch how Amazon has evolved with its experimentation.

Longtime readers will remember when Amazon opened its first Amazon Go store in Manhattan. I visited the store shortly after it opened in the summer of 2019.

For the sake of newer readers, Amazon Go stores are small convenience stores where everything is placed perfectly on custom-designed shelves. Every piece of produce has a very specific space, and products are clearly separated from one another to simplify identification.

Consumers scan a bar code on their phone to get into the store, and then cameras powered by artificial intelligence (AI) and computer vision (CV) track every product they take from the shelf. It’s an amazing experience.

Amazon followed this up by launching Amazon Go Grocery stores in February of last year. These are small grocery stores that work just like the first Go stores, except they carry fresh food and produce.

From there, Amazon opened its first mid-sized store. That was back in the summer of last year.

But Amazon didn’t immediately employ its “Just Walk Out” technology with these. Instead, Amazon tested out Dash Carts.

With this model, the carts themselves were equipped with cameras that kept track of the products placed into them. Amazon was experimenting to see if this would work better than the computer vision approach with cameras on the ceiling.

It seems Amazon didn’t like the Dash Cart model, however. When it rolled out its first full-sized grocery store back in June, the store utilized “Just Walk Out” technology.

So we watched Amazon test out several different models and technologies over the course of the last three years. And it all has led up to this point.

By rolling out the “Just Walk Out” model to Whole Foods stores, Amazon is signaling that the benefits of AI-powered cameras on the ceiling far outweigh the costs. There will be a large upfront investment, but Amazon will be able to dramatically reduce labor expenses across its Whole Foods stores – all while delivering incredible convenience to consumers.

It’s a win-win. I can’t wait to go into a Whole Foods with the tech enabled to evaluate it in person.

And make no mistake about it – this will light a fire under the rest of the industry. Every retail store will be pressured to go cashier-less over the next 24 months or so. They will have to adjust in an attempt to keep up – both on price and convenience.

This will be such a draw to consumers. The ability to simply walk out of a store and save all the time typically spent waiting in line and being checked out is a game changer for most consumers.

Naturally, there will be an adjustment period at first. But I think cashier-less retail will become the “new normal” much faster than most expect.

And once again, this shows that Amazon (AMZN) remains a “must own” for every serious technology investor. Even though the company carries an enterprise value of more than $1.6 trillion, it continues to innovate and create new value. This is a stock to hold for years to come.

Longtime readers of The Bleeding Edge may remember a company called Exscientia. This is the UK-based company that advanced the first drug designed entirely by an AI into human clinical trials. We talked about this way back in February of last year.

Well, Exscientia has received tons of attention in the private investment markets thanks to this milestone. The company has now raised more than $500 million in venture capital (VC) as a private company. And its most recent VC raise especially caught my eye…

The Gates Foundation just invested $35 million into Exscientia. And what’s most interesting here is that the Foundation is requiring these funds to be used for the development of antiviral therapies. I think this is an intelligent move and one that will ultimately be great for our global society.

In the race to combat COVID-19, almost all the focus has been on vaccines. With the exception of Regeneron’s monoclonal antibody therapy, the industry has paid very little attention to antiviral therapies.

And public health officials have largely ignored and even refused to explore the use of off-patent therapies that are low-cost and potentially effective. This, of course, strongly benefits large pharmaceutical companies.

This is why antiviral therapies are so important. We can’t ignore them any longer, especially when we consider that there will be more coronavirus outbreaks in the future.

Indeed, the Nipah virus is breaking out in India right now. And it’s far more dangerous than COVID-19 ever was.

So far, the World Health Organization (WHO) estimates the fatality rate at 40-75%. That is frightening. For perspective, that’s compared to an infection fatality rate for COVID-19 as shown below by age group.

So I’m glad to see the Gates Foundation making this kind of investment into antiviral therapies. This is critical to help us combat future outbreaks.

And the added benefit is that many antiviral therapies can be given to a population both before and/or after catching a virus like COVID-19 to help protect the body. And they can reduce the severity of any symptoms.

The thing to keep in mind here is that employing AI in therapeutic development has the effect of multiplying capital investment. That’s because the AI can work around the clock, in a fraction of the time, and explore many magnitudes more potential therapeutic candidates to determine which ones will carry the highest probability of success.

Exscientia’s technology will help accelerate therapeutic development. And it will not only help protect against COVID-19, but other future viruses that we will inevitably be exposed to.

So this $35 million investment will go a lot farther with Exscientia than it would for “old school” biotech companies. I expect we will see some exciting developments in the antiviral space as a result.

We have been tracking Facebook’s progress with regards to its smart glasses in partnership with sunglass brand Ray-Ban. And we just got the full scoop…

Facebook officially released the smart glasses design, and I have to say that they look beautiful. Here’s a visual: 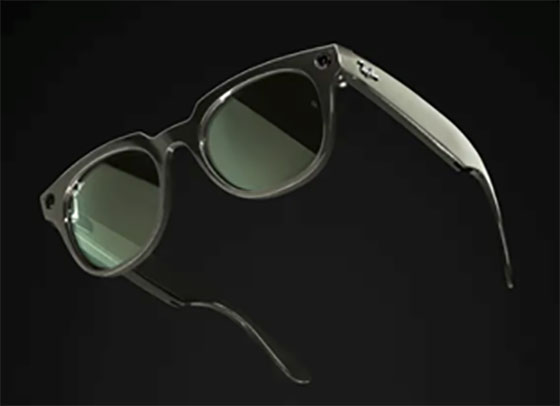 As we can see, these look just like a regular pair of sunglasses. In fact, this is Ray-Ban’s classic Wayfarer design. The only notable difference is that there are two small cameras embedded in the top corners of the frames. And they aren’t even very noticeable.

I think Facebook hit it out of the park with this design. I’ve been saying for years now that the key to the consumer adoption of tech-enabled eyewear is form factor. People don’t want to wear big, bulky, or awkward goggles around. That’s why early attempts like the Google Glass never really took off.

So this is the kind of product that will do well. And Facebook has made the technology incredibly easy to use. One might say too easy… More on that in a moment.

For starters, the glasses tether to a smartphone and the Facebook app. They are enabled with voice recognition technology that allows wearers to use the app just by issuing voice commands. “Hey Facebook” is all it takes.

Also of note, there is a small button on the side of the glasses that users can press to quickly take a picture or record a video. This causes a small LED light to come on in the front of the glasses to let people know that recording is in progress.

And as we would expect, any pictures or videos taken can post directly to the wearer’s Facebook account. It’s very easy to use. Taken together, all this is a recipe for mass adoption.

And remember, this is just a steppingstone toward full-blown augmented reality (AR) glasses. That’s when things get really exciting.

While these glasses make it easy to take and post pictures and videos, AR glasses will completely change the dynamic. AR technology will enable glasses to embed 3D graphics right into our field of vision.

Imagine reading emails that appear to float just a few feet in front of your eyes. Or we could play games with digital characters overlaid onto our field of vision.

Below, we can see an early example of an AR game called Dr. Grordbort’s Invaders, which was designed on Magic Leap’s AR eyewear. 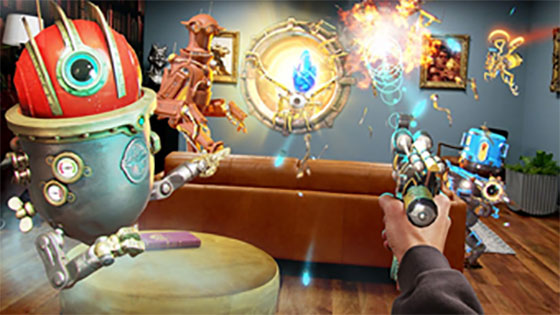 Simply put, AR glasses will be the next multibillion-unit consumer electronics boom. And believe it or not, I expect AR glasses to eventually replace the smartphone. That’s how big this opportunity is.

So the race is on.

This is a great first step by Facebook. And it is also a great way to see how the market reacts to those wearing smart glasses.

After all, with the simplicity of use, will others feel uncomfortable knowing that they may be recorded by those wearing the glasses? There will certainly be discussion about privacy concerns. It is inevitable.

But that’s the point. Facebook has an underlying plan with the release of its Ray-Ban smart glasses that no one is talking about.

The company is intentionally releasing such an easy-to-use, sunglasses-like product even though the glasses have less functionality than a pair of AR glasses. It wants to get consumers used to wearing tech-enabled glasses. It’s priming the pump for its future product release.

This trend cannot be stopped. Consumers will forgo their privacy concerns for the sheer convenience of using this technology, just as we have all done in using Facebook and Google.

I fully expect to see Facebook launch its first pair of AR glasses within the next 24 months. And I have no doubt that companies like Apple, Google, Snap, and maybe even Microsoft are scrambling to get their own eyewear products ready for prime time as well.