Van’s note: Van Bryan here, Jeff Brown’s longtime managing editor. Here at The Bleeding Edge, we share the latest in the world of technology. But when other investment ideas we think are worth bringing to readers come across our desk, we have to share…

Today, we’re bringing an attention-grabbing idea from our friend and colleague from Casey Research. Dave Forest is an investment expert, venture capitalist, and entrepreneur who has located profits from a little-known security that billionaires use… this is a type of investment that has helped his readers chalk up gains of 4,942%, 2,805%, and 1,433%… all in less than two years.

Best of all, tonight Dave is hosting his first live event at 8 p.m. ET to get the word out on how this asset class works… and how you can join in.

It’s called the “Zero to Retirement Summit.” And while the gains above look impressive, Dave believes there’s more to come. In fact, he says that those who get in before mid-November will be able to make 49 years’ worth of profits… in one trade.

At first, it may seem like an outrageous claim. But you can make up your own mind by signing up for Dave’s free event tonight.

In the meantime, read on to learn how you could make money like the billionaires…

If you follow along in the mainstream financial media, you’ll hear plenty of stories about the Wall Street elite cleaning out the markets…

And leaving the rest of us with table scraps.

For example, Warren Buffett made a reported $12 billion in Bank of America after the 2008 financial crash – a 240% return. He also made billions in similar investments with Goldman Sachs and General Electric, for nearly $4 billion and $1.5 billion, respectively.

And it’s not just Warren Buffett.

Billionaire investors like David Einhorn and John Paulson also use the same strategy as Buffett to pad their pocketbooks. And Jeff Bezos is now using it, too… (more on that in a moment).

This news can get discouraging… especially in a time of growing inflation when your money doesn’t go as far. You’re probably thinking there’s no way you could see gains like these without billions to invest at your disposal… or accredited investor status.

But it turns out you can.

Because I found the secret investment used in those windfall gains. Turns out, it trades on most major stock exchanges – including the Nasdaq and the NYSE.

This security is easy to buy and sell through nearly any brokerage account… Anyone can own it.

In fact, I’ve been bringing these investments to readers of my Strategic Trader advisory for over two years. And we won’t settle for 240%… instead, we’ll use this strategy for gains as high as 4,942%…

How We Can Beat the Big Guys

It’s one of my favorite wealth-building strategies.

If you’ve never heard of warrants before, you’re not alone. I’d guess that nearly 99.99% of investors have never heard of them. And that’s a shame. Because the explosive returns of these investments are staggering.

Take one of the warrants we sold out of in Strategic Trader: Purple Innovation.

In February 2019, when we recommended the warrants, their average daily trading volume was under 65,000. Walmart, by contrast, regularly trades several millions of shares daily.

For that reason, warrants usually don’t get inflated by big investors… and a lot of mainstream investors have no idea they exist.

The best part? Many warrants trade below a dollar. Some trade as low as 10 cents… even a penny in some cases. At the time we recommended them, the Purple Innovation warrants cost around 20 cents.

But make no mistake. These aren’t penny stocks.

The Purple Innovation warrants, for example, were issued by a company that sells mattresses. It’s got steady revenues and easy-to-understand operations.

The thing with warrants is, they’re leveraged to the price of the stock. If the stock does well, the warrants often do well… by a longshot. 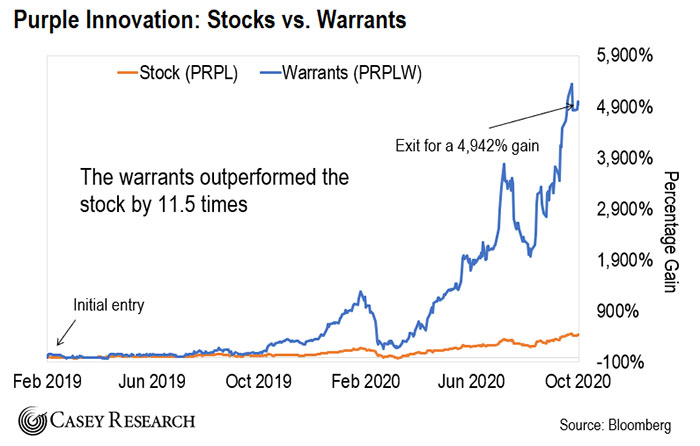 That’s how the average investor can beat the big guys. Even with a small investment – the kind that doesn’t jeopardize your savings – you can make enough to meaningfully improve your life.

Life-Changing Profits… Without Betting the Farm

Now, you may think I’m just picking an exceptional example.

Another one of my Strategic Trader recommendations, Blink Charging warrants, gained 2,805% in five months. That’s enough to turn a $1,000 investment into $29,050.

And I did it again just two weeks later with Vivint Smart Home warrants for a 393% return. That would have turned a $1,000 investment into nearly $5,000.

Seven other warrants in my portfolio are currently up between 30% and 1,289%. And I believe they have a much greater upside ahead.

But there’s another point I want to stress.

Warrants aren’t complicated financial instruments. You can buy and sell them as easily as stocks with just a couple of clicks, right from your brokerage account. And you don’t need a lot of money to see life-changing results.

As I showed above, just $1,000 could return windfalls.

That means you can build a substantial position without investing billions like Buffett… and you can cash out for greater returns.

Life-changing profits… on easy-to-understand terms… without betting the farm.

That’s why I’ve been bringing this strategy to my readers since 2019.

And as I showed above, it’s really paid off – and we’re just getting started.

Now… back to Jeff Bezos and Amazon…

Our Next Big Windfall – Jeff Bezos

Most investors make a bet on a company’s stock in hopes that it goes higher. Over time, they want to create new wealth by betting on the potential for that company to do well.

But Jeff Bezos isn’t like the rest of us. He’s one of the world’s richest men for a reason.

According to Amazon’s most recent quarterly filing with the SEC, the value of the investments it holds in companies is around $9.2 billion today.

That’s over 10 times the value from just three years ago. This means Amazon may be sitting on around $8 billion in investment gains so far.

But we’ve figured out how he does it… It’s a simple formula, really.

Bezos wants a grand slam every time he steps up to the plate. Now, he’s guaranteeing his grand slams with… you guessed it, warrants.

Here’s an example of how this works…

Amazon used Canadian charter aircraft company Cargojet for years to move packages. But in 2019, the company wanted to expand its partnership. So Amazon decided to invest in Cargojet. But Amazon didn’t ask for stock. It asked for warrants.

Cargojet agreed to issue warrants to Amazon with a $91.78 per share strike price. That means Amazon will have the right to buy shares of Cargojet for $91.78 for seven years – no matter how high the stock price goes in that time.

But for Amazon to “unlock” all of the warrants, it has to spend $400 million with Cargojet over that timeframe.

It’s a win-win. In 2019, Cargojet did $367 million in sales. Amazon promised to add hundreds of millions more.

Today, shares of Cargojet trade for $202. That means Amazon’s warrants are showing about a $250 million gain so far.

And Amazon has done this at least six times so far… to the tune of as much as $2.5 billion.

Jeff Bezos’ seventh warrants deal is what has me so excited today. That’s because it can change my readers’ lives.

In fact… I’ve never seen a deal with the potential to make my readers as much money as this… ever.

That’s why I’m holding my first live event tonight at 8 p.m. ET to get the word out.

It’s called the “Zero to Retirement Summit,” and I’ll give you all the details on how to ride Jeff Bezos’ coattails.

I believe those of you who get in before mid-November will be able to make 49 years’ worth of profits… in one year.

If that sounds too good to be true, I urge you to join tonight. It’s free… and you owe it to yourself to be informed about these billionaires’ dealings.