In the world of high tech, a name change is rarely ever a good sign.

It’s almost always the symptom of a need to reposition a company in an effort to wash away the failures and underperformance of the past. It rarely works.

After all, substance is what matters in the end. By definition, successful companies are producing a product or service that others value. Companies that aren’t able to do so don’t have happy endings… even if they change their name.

Which is what makes Facebook’s announcement within the last 24 hours so interesting. It has decided to change its own name. We’ll almost certainly find out what that new name is by next week.

This is a big deal. Facebook is one of the most iconic consumer brands in history, and it wants to throw that away?

On the surface, one might speculate that Facebook is doing this in an effort to wash off its troubles with regulators and politicians. Aside from the fact that a name change wouldn’t clean up Facebook’s litany of transgressions, the regular series of hearings on Capitol Hill are just for show. And Facebook knows this.

Certain factions in the government want Facebook to proliferate. After all, it is one of the world’s largest surveillance networks. And this network is one that can be used – and has been used – to influence elections.

Facebook certainly doesn’t need to reposition its brand due to financial troubles or product problems. Facebook is worth nearly $1 trillion, with almost $120 billion in revenue this year.

Its gross margins are almost 81%, and it will generate $36.5 billion in free cash flow this year. The company sits on $64 billion in cash and pays no dividend. This is one of the most successful companies in history.

It collects consumer data the world over, whether we use Facebook or not. And it mints a fortune by selling access to that data to advertisers.

And how much revenue does it share with its users who provide their valuable data? Zero. Not a dollar. Shareholders don’t even get a dividend check. So why the rebrand?

The real catalyst for the name change is nothing more than greed. After all, in the U.S. the average Facebook user spends two hours and 24 minutes a day using Facebook products (Facebook, Instagram, WhatsApp). But what about the rest of the day? Facebook wants more.

And the way that it will try to get more is by going all in to create a metaverse where its users can spend even more time every day. This is an online world where consumers can game, be entertained, socialize, virtue signal, transact, and even work and be productive.

Whether consumers access the world through a mobile phone, an internet browser, a pair of augmented reality glasses, or virtual reality glasses, Facebook – or whatever it will call itself – wants us there.

The more immersive the experience, the better. That’s why Facebook bought Oculus so many years ago for its virtual reality technology, and why it has been investing so heavily in augmented reality tech.

We should all be wary of Facebook’s motives. We have learned that the company cannot be trusted.

While Facebook will still be successful, the future for metaverses is far more distributed, open, accessible, and ideally a world in which its participants can share in the remarkable wealth creation that has already begun.

And my goal is to show my subscribers the way…

The future of urban transportation…

A French company called Citroën just revealed an incredibly creative autonomous vehicle concept. The goal is to unlock a vision of urban transportation that maximizes personal comfort and productivity.

Here’s a look at Citroën’s vision:

These are customizable autonomous vehicles.

Citroën’s core product is the base platform. It’s basically a “skate” with four wheels, electric vehicle (EV) batteries, and a drive motor. Customized modules can then be dropped on top of the autonomous platform. This is how consumers can get an individualized experience.

For example, one of the modules contains a rowing machine. This enables passengers to get a quick workout on the way to their destination.

Another module contains a red couch with a side table. Passengers can relax and have a drink as they enjoy the ride.

There is also a family friendly module that’s large enough to fit a baby stroller. It allows families to travel together in comfort.

And these are just a few possibilities. The beauty of Citroën’s platform is that all kinds of customized modules could be designed for it.

I envision a café module where consumers can order coffee and lattes on a tablet. Then a robotic arm would make and serve the drinks. No barista required.

This is such a neat concept. I can see this being adopted in urban settings, where vehicles rarely go more than 25 or 30 miles per hour. It’s a great use of EVs and autonomous driving technology.

And here’s the thing – it would only take a few minutes to swap one module out for another. That would just require a designated location and a small crane to lift one module off and plop another one down. Then it could be secured safely for the next ride.

This is an interesting take on the future of autonomous vehicles that makes a lot of sense. I’m excited to see this kind of modularity adopted as it brings strong benefits to both consumers and businesses.

The rise of decentralized autonomous organizations…

One of the hottest companies in the blockchain industry just made an interesting acquisition.

For the sake of new readers, NFTs are digital collectibles. They allow us to cryptographically determine ownership and authenticate digital assets on a blockchain.

And the scope of NFTs is amazing. We are talking about digital art and images, videos, trading cards, and all kinds of interactive content and gear for metaverses. And since they are on a blockchain, these collectibles can be easily transferred from one owner to another in seconds.

As for Brud, it is a firm that develops brands around virtual influencers. Lil Miquela is a great example. Here she is: 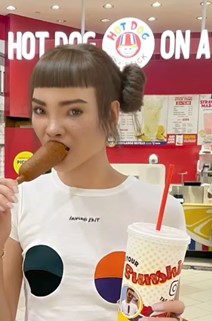 This is Lil Miquela posing in front of a restaurant. And notice the product placement. She is eating a corndog and drinking from a branded cup. Obviously, this is for advertising. It’s the same model that has been used to produce television commercials for decades.

But there are two distinct differences here…

First, Lil Miquela has about three million followers on Instagram. She can advertise directly to them, at no cost, any time.

Second – and this is the kicker – Lil Miquela is not a real person. She is one of Brud’s “virtual” influencers created entirely by computer graphics.

Brud actually has a catalog of virtual humans that are very lifelike and have carefully constructed social media feeds that actually engage with followers. It may sound strange, but it is a powerful business model and very influential.

Clearly, Dapper Labs will work with Brud to develop NFTs around Lil Miquela and other popular virtual influencers. That’s one motivation behind this acquisition.

Brud’s founder, Trevor McFedries, also founded one of the most popular decentralized autonomous organizations (DAOs) out there. And I think this is where Dapper Labs’ big interest lies.

DAOs are entities with no executives or management teams at all. They are leaderless entities where consensus is formed by votes using tokens that are recorded on a blockchain. That’s why I have referred to DAOs as a no-CEO structure.

For many of us, this concept feels unnatural. And we may think that there is no chance that DAOs will succeed.

However, some of the top blockchain projects in the industry have embraced the DAO structure. This includes ShapeShift and Maker. There’s a reason for this.

If set up correctly, a DAO could be an incredibly robust organization simply because there’s no single point of failure. DAOs encourage communities to come together to solve complex problems – each contributing what they can to drive the project forward.

And everyone is financially incentivized in the same way. The more successful the project, the greater the value of its digital asset.

And just like Dapper Labs streamlined the process of creating and commercializing NBA Topshot NFTs, I believe it can develop a process for setting up new DAOs – for both established companies and individual creators.

This will be one of the biggest trends in the blockchain space throughout 2022. I believe DAOs will experience the same explosive growth next year that we are seeing with NFTs right now.

That’s why I created a service focusing on all of these incredible developments surrounding the blockchain space. There’s a unique opportunity for investors as this space matures and evolves… and I want my readers to take advantage.

If you haven’t yet checked into Unchained Profits, I’d encourage readers to go right here to learn more about how to get started investing in the hottest blockchain projects.

We will wrap up today with another big development in the NFT space.

NFT brand RTFKT (pronounced “artifact”) just announced that it is collaborating with celebrities like Janet Jackson and Jeff Staples to develop physical products that will double as NFTs in a metaverse. This is a trend that I think we’ll see pick up in the months to come.

It’s going to start with a pair of sneakers. Here are the RTFKT RTX3080 sneakers: 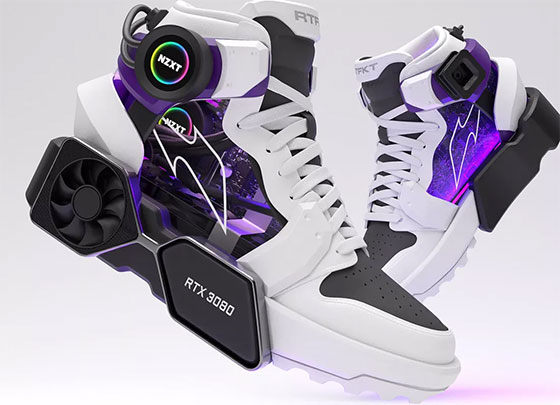 This sneaker will be developed as an NFT in two different metaverses: Decentraland and Sandbox. And anyone who purchases the NFT will also get a physical pair of the same sneaker shipped to them.

So it’s both a digital collectible and a real item. That certainly increases the appeal.

And the fact that we are seeing big celebrity names coming into the space shows us that this trend has legs. It just makes too much sense.

We are going to see designers and influencers jump all over this NFT/physical product concept. There’s a ton of value here. And it’s just a fun way to shop and invest.

So this is just more proof that we are still in the early days of the NFT trend. This will remain a key area of focus for us here at Brownstone Research.

And if you’d like to learn how to get started with NFTs, then go right here to see my recent presentation on the growing “tokenization” trend.