There is no sector in early stage private investments that is hotter than non-fungible tokens (NFTs) and metaverse related companies right now.

Anything and everything related to these massive trends are hot.

Protocols, applications, marketplaces, augmented reality (AR) tech, platforms for creators, you name it. In more than two decades of investing in private companies, I’ve never seen a sector ramp up this quickly to build something new.

So I wasn’t at all surprised to see the third-quarter numbers for NFT sales coming in at record levels. $10.7 billion last quarter, which is up more than 8x compared to the second quarter. And get this, year on year, the third quarter is up to 382X compared to the $28 million from Q3 of last year.

How’s that for growth? 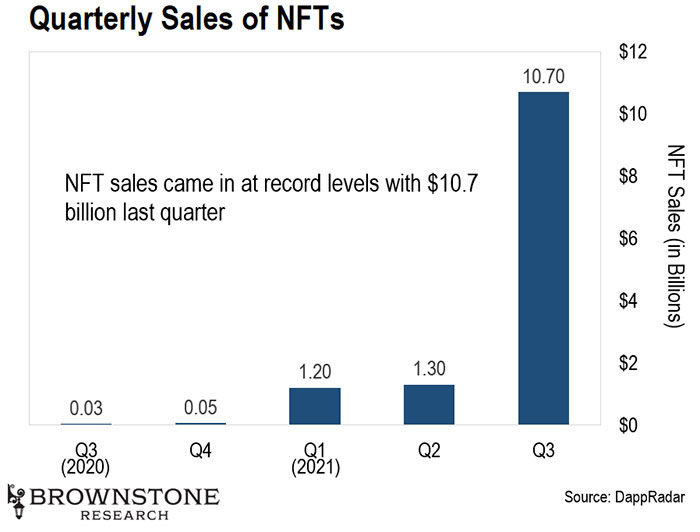 When we look at a graph like the one above, it is almost hard to believe. A year ago, the industry barely existed at all, and now it’s doing more than $10 billion in a quarter. And there is no sign of it slowing down.

We are also starting to get a picture of the most popular forms of NFTs. As we can see below, “collectibles” is the clear leader. 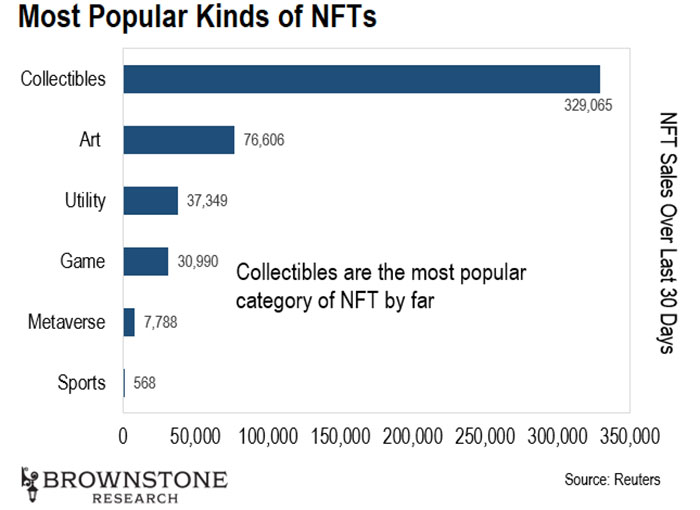 This isn’t a surprise as the industry has been primarily focused on minting and owning one-of-a-kind NFTs. Not only is this a status symbol, but a good NFT can prove to be one heck of a great investment.

The picture above will change though as the industry evolves.

NFT based games like Axie Infinity and Star Atlas are still in very early stages. Many more will follow. And it is just a matter of time before a major gaming company like Epic Games (creator of Fortnite) or Activision Blizzard injects NFTs into their own game franchises.

The added economic incentives and economic value created are simply too great for them not to take the leap. It’s the future of gaming.

And today, the metaverse space is like NFTs were early last year. Building a metaverse is a much larger undertaking. But as they are launched, the adoption rates will be unbelievable and NFTs will thrive in this kind of native Web 3.0 environment.

This is why I stay so plugged into the earliest stages of capital formation. It is a lens on the future. I’m able to see and invest in the most exciting ideas that will result in future products and services.

And that knowledge finds its way into all of my research publications. I hope you enjoy it.

If you’d like to hear more about my latest research on NFT’s, just go right here.

A major pivot in the quantum computing industry…

Quantum computing company D-Wave just made a major announcement. The company is pivoting away from its “quantum annealing” approach to focus on developing a superconducting quantum computer.

This is a symbolic moment in the industry. I’ll explain with a little background.

Good examples of optimization problems are supply chain optimization, pattern recognition, financial portfolio optimization, and routing problems. And as useful as quantum annealing can be, there’s a limit to what these systems can do.

They simply aren’t capable of being a universal, general-purpose computing system. Quantum annealing was never going to be a solution for building a universal, fault-tolerant quantum computer.

And D-Wave’s announcement just acknowledged that fact. And the new direction that D-Wave is taking is what we should take the most notice of. It is going to focus its energy on developing its gate-based superconducting quantum computer. This is the same approach that Google, IBM, and a few private companies are taking.

D-Wave could have chosen to pursue either a trapped-ion or an atom-based approach to quantum. But recently, superconducting quantum computers are showing the most promise. And D-Wave has clearly voted in favor of this approach.

I had come to the same conclusion in my own research. In fact, I just recommended what I believe is the best early stage quantum computing company on the planet in my Exponential Tech Investor service. And, no surprise, the company is working on superconducting quantum computers. [Paid-up subscribers can find the issue here.]

This company has the potential to become the most important computing company on the planet. Its technology literally defines what comes next after the end of Moore’s Law.

This is the answer.

The next hot EV IPO is not what it seems…

We last featured Rivian back in January. That was when the company was working to close on a new funding round to support the development of its electric pickup truck. 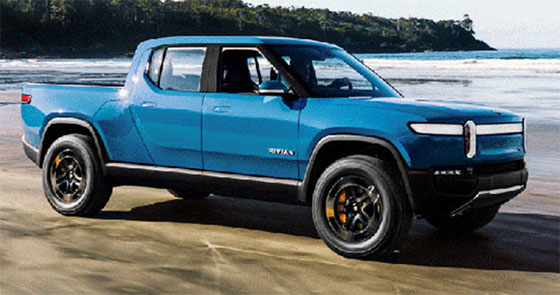 This is Rivian’s fully electric truck for the consumer market. It’s designed to compete directly with Ford’s F-150 Lightning.

This has made Rivian a hot name in an already hot market. In fact, the company is looking to go public at an $80 billion valuation. That’s not set in stone – it still has to go through the underwriters first.

But even if the underwriters tweak it a little bit, Rivian will go public at a grossly inflated valuation considering the company has only delivered a few trucks in the last couple of weeks. It will be years before production amounts to much.

That’s insane. And I just found another red flag in the company’s S-1…

In the filing, I found suggestions that Rivian will have a self-driving system for consumers. This would be an add-on to its truck. The price tag is listed at $10,000. Not coincidently, this is the same price as Tesla’s Full Self Driving (FSD) service.

But here’s the thing – Rivian is not an artificial intelligence (AI) company. Its EVs have driven exactly zero miles in self-driving mode. Yet the company is talking about selling this as a feature for $10,000.

Meanwhile, Tesla cars have driven more than five billion miles on Autopilot. And as regular readers know, Tesla takes in data from every mile driven and uses it to improve its self-driving AI.

So Rivian is trying to position itself as a legitimate competitor to Tesla here, but it’s not even in the same game.

Rivian is at least five years, and probably much more, behind Tesla on self-driving technology at this point. And that gap is only going to grow as Tesla rolls out its technology to its entire user base.

So why would Rivian make these suggestions?

The answer is that it is pure marketing fluff. The goal is to create hype around the company to inflate the value of its initial public offering (IPO).

I really don’t like these kinds of ploys. They don’t end well. This is a major warning signal for me to avoid the IPO.

Depending on where it goes public, the stock would need to fall at least 70%, and maybe even closer to 90%, before the valuation would make any sense. This is 100% a car manufacturing company – this is not an AI company or a high-tech company that would deserve such high valuations.

On the other hand, if you want to learn about my top way to profit from the electric vehicle revolution, then go right here for that story.

A brand-new product launch geared at the metaverse… 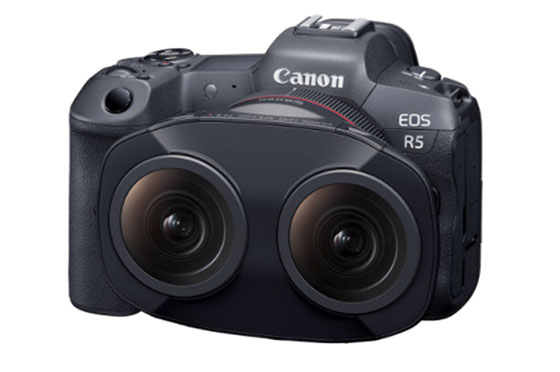 It’s odd-looking. We can see the two fisheye lenses on the front of an EOS R5 camera. They allow the camera to capture a 190-degree field of view. And the image quality will be better than that of a standard VR camera.

The company is also pairing this with a subscription for a software package including Adobe Premiere Pro. The software will allow users to work with the video and images captured by the camera.

Here’s why this is so interesting…

As we discussed on Tuesday, we are now rapidly racing into the age of the metaverse. Some of these metaverses will be built entirely with computer graphics. Others will incorporate augmentations in our real world.

Those augmentations will need to be captured and produced, and that’s exactly what this camera is designed to do. This is a product designed for creators and producers interested in making content and bringing experiences into a virtual environment.

We’re hitting an inflection point in the industry.

We have been rapidly building out all the tech infrastructure to support metaverses. That infrastructure consists of the protocols, platforms, computing power, and storage capacity necessary to support these new worlds.

Now we need to start programming them with content. That’s what will bring these metaverses to life. That’s what this camera is all about.

And if you haven’t yet started the investment in this new world, the good news is that there’s still time. But I’d encourage anyone who’s interested in checking out my latest research to go right here.