In a remote and dusty part of West Texas, history was made this morning.

A few minutes after 8 a.m. central time, Jeff Bezos and his crew left Earth and crossed the line into space. Literally.

After about a four-minute ride up above the Kármán line (altitude of 100 kilometers, or 62 miles), the booster separated from the spacecraft and returned to Earth. The four-person crew enjoyed several minutes in zero gravity. 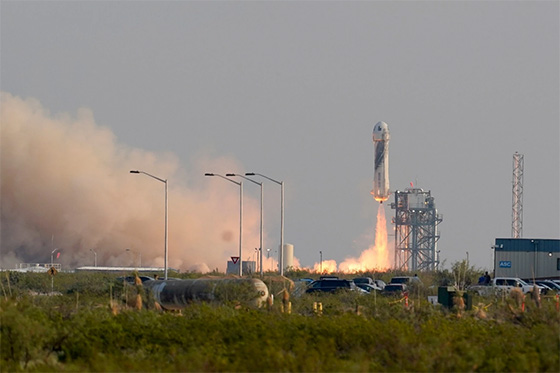 Traveling with Bezos was his brother and now both the oldest and youngest astronauts in history – Wally Funk and Oliver Daemen. Wally, whom we wrote about several days ago, is 82 and still plans on going up again on a future Virgin Galactic flight.

And the surprise passenger was 18-year-old Oliver Daemen, whose father secured the seat for him for an undisclosed amount. That’s one lucky kid, and now he’s the youngest astronaut to ever fly. Oddly, the winner of the auction who paid $28 million for that first ride had a “scheduling conflict” and couldn’t make the trip.

I had to chuckle. The launch date was well known prior to the auction. Seriously, what could possibly be more important on your schedule than your $28 million ticket on the first-ever commercial flight into space (above the Kármán line – the real deal)?

Start to finish, it was just under 11 minutes. The flight ended with an Apollo-esque “splashdown” in the Texas desert not far from the launchpad. Absolutely fantastic.

“Splashdown” in the Desert 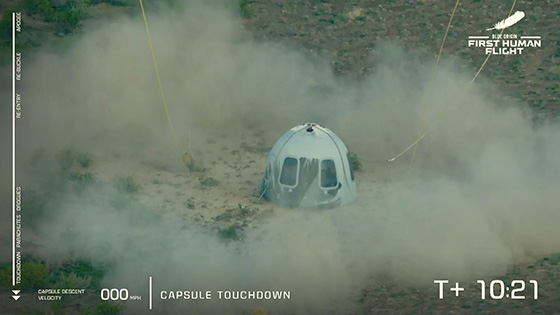 And so it begins. It won’t be long before Virgin Galactic and Blue Origin are offering multiple flights every month. They’ll become so frequent that they won’t even be news anymore.

Branson has been up. Bezos now has a smile on his face. Who’s next? I think we know the answer – Elon Musk.

And it won’t be a suborbital flight. We know he’ll go all the way to orbit. And he’ll probably stay on the International Space Station or perhaps on the soon-to-be-constructed Axiom Space Station sometime in the future.

Either way, we made it. And thanks to extraordinary perseverance, billions of dollars of investment, and the risk that these gentlemen took, space is no longer a dream.

There’s a new player on the block in the quantum computing space backed by both DARPA (Defense Advanced Research Projects Agency) and NASA. Early stage company ColdQuanta has launched itself onto the stage with an entirely different approach to quantum computing. It’s called “cold atom” technology.

We’ve been tracking developments in quantum computing quite closely in The Bleeding Edge. And the reason is simple. Once we have fault-tolerant quantum computers, we’ll be able to tackle computational problems that simply aren’t possible with classical supercomputers. Technological advancements will accelerate and impact just about everything.

To bring newer readers up to speed, the two most prevalent approaches to quantum computing have been the superconducting approach and the trapped-ion approach.

Companies like Rigetti and Google have made great progress with the superconducting approach. And companies like IonQ have done well with the trapped-ion method.

But these two approaches share a major challenge. They both require a large refrigeration device capable of reducing the temperature to −273 Celsius. That’s colder than space.

And there’s a reason for this. The atoms must be that cold to be in a state where their quantum properties can be manipulated precisely.

The cold atom approach uses a different method to produce these cold temperatures. Instead of large dilution refrigerators, it employs laser technology. And the lasers can reduce the temperature to levels even colder than −273 K. About 1000 times colder, to be specific. And this allows for even more precision with regards to the quantum state of the atoms.

The other advantage is size. Without the need for a large refrigerator, these cold atom quantum computers could potentially fit in the palm of your hand.

ColdQuanta also believes that this will scale well, and in fact, the startup claims to have a 100-qubit quantum processor right now. That would be the most powerful quantum computer produced to date.

The team at ColdQuanta isn’t quite ready to demonstrate the system yet. It needs to optimize the design and improve the fidelity of the system. If they can tune the system to have a level of fidelity as good or better than the trapped-ion approach, this would be an incredible development.

I’m still expecting a major breakthrough this year in quantum computing, and this might just be it.

This next-generation CRISPR company is on the rise…

And get this – the raise values Prime Medicine at $1.2 billion. The company was just founded in 2019. It became a unicorn in less than two years. That’s incredible.

As a reminder, CRISPR genetic editing technology is like software programming for DNA. It allows us to “edit” the genetic mutations that cause many diseases.

Both of these approaches work incredibly well. And we have profited handsomely from our investments in a few of the very best CRISPR companies in my premium research service Exponential Tech Investor.

We are up about 136% on our first-generation CRISPR companies, more than doubling our money on each position. And we have gained 268% on Beam Therapeutics (BEAM) (which paid-up members can see here). That’s heading toward a quadruple.

And there is still much more upside ahead. Most don’t realize this, but the genetic editing field is a complete greenfield opportunity. We are now reimagining how to cure human disease, not by taking a pill, but by correcting unwanted mutations.

No one approach is correct for every disease. Different approaches to CRISPR technology will be optimal for different conditions.

And that’s where Prime Medicine comes in.

Prime Medicine employs what Liu calls prime editing technology. This approach can scan a mutated cell’s DNA for the source of the problem and then repair it on the spot. And it can do this for multiple mutations at the same time.

This opens the door to an entirely new universe of disease targets. Roughly 40% of all genetic diseases are caused by two or more simultaneous mutations. Prime editing technology can now be turned loose on them.

Five years ago, a raise like this would have been unheard of in the genetic editing space. No longer. The incredible success of the pioneers in the space over the last few years have demonstrated the power and efficacy of this technology.

Finding funding for the most promising teams in the space is no longer an issue. Full speed ahead.

I have high hopes for Prime Medicine and will be keeping an eye out for a future IPO.

Bigger picture – CRISPR genetic editing technology is paving the way to a disease-free world. We’re no more than a decade or two away from being able to cure many diseases that were previously thought untreatable. That’s great news for all of us.

And this will lead to some fantastic investment opportunities in the years to come as well. It’s a great time to be a biotech investor. And if you’d like to learn more about our biotech investments in Exponential Tech Investor, then just go right here for the details.

Pony.ai is making its move…

We last checked in on autonomous driving startup Pony.ai back in February.

For the sake of new readers, Pony.ai is building a full technology stack that includes autonomous driving hardware as well as the software solution. This stack includes all the sensors, cameras, light detection and ranging (LIDAR) applications, and artificial intelligence (AI) software that enables self-driving cars.

This approach is very similar to Tesla’s (see here for details).

Another thing I like about Pony.ai is how aggressive it has been with its forecasts. Like me, Pony.ai has predicted that we’ll see autonomous vehicles on the road in volume in major metropolitan areas by 2024.

This is in stark contrast to what most of the automotive industry has been saying – that autonomous driving is at least a decade out. And yet it appears Pony.ai is about to make its own prediction a reality.

The company just announced a major partnership with Toyota. The two are gearing up to produce self-driving cars in volume by 2023.

The foundation of the car will be Toyota’s Lexus RX models. Pony.ai will install its technology stack into the car model to convert it from a normal Lexus to a self-driving car with Level 4 autonomy. This is only one step away from full self-driving capabilities. At Level 4, these cars will be able to drive themselves in all but the most complex driving conditions.

And here’s what’s most exciting about this…

Given that the self-driving Lexus RX models are scheduled for production in 2023, that means that the production is locked in. We can be sure that Pony.ai and Toyota have already figured out the entire design and secured the necessary supply chain. That’s because vehicle designs must be finalized about three years ahead of production.

In other words, this is a done deal. All the pieces must already be in place.

So we can expect to see self-driving Lexuses on the road in just two years. That’s another amazing proof point that this trend is moving faster than most people realize.

And we’ll continue to keep a close eye on Pony.ai. I expect the company will go public within the next 12 months.

And given the number of autonomous technology companies that have recently gone public via a reverse merger, I wouldn’t be surprised at all if it went public through a SPAC transaction. It would make a fantastic investment target at the right valuation.

P.S. Would you like to predict market moves… Even weeks in advance? It sounds impossible… And normally, it is.

But I’ve recently found a way for regular investors to do so. It all involves a “glitch” in the markets that can identify massive stock rallies– in any sector (not just tech stocks) – days or weeks ahead of time. In fact, my research indicates that this “glitch” revealed over 17,000 opportunities where you could have doubled your gains… Or more.

This discovery could help investors turn a few calculated moves into a nest egg… And it’s been a guarded secret of the financial elites on Wall Street.

On July 28, at 8 p.m. ET, I’ll be revealing how this “glitch” works at my Outlier Investments Summit. And I’ll explain how you can start profiting right away. I’ll even be giving out the name and ticker of a top “glitch” stock for free that night.

So before you make your next move in the stock markets, please mark this date down on your calendar… And go right here to reserve your spot to attend.

You don’t want to miss this event…