Alpha Centauri has long been a destination of interest in the world of science fiction. Two of my favorite books that feature this star system are Neuromancer by William Gibson and Foundation and Earth by Isaac Asimov.

It is what is known as a binary star system. And it has captured our interest because of how close it is to our own solar system – a mere 4.37 light years away.

There are two sun-like stars, Alpha Centauri A and B. There’s also a red dwarf star called Proxima Centauri that is part of this system.

We’ve known for some time that there is a planet in the habitable zone in orbit around Proxima Centauri, known as Proxima b. However, this exoplanet is tidally locked and overwhelmed by stellar winds, which makes it an unwelcoming destination.

But days ago, a team of astronomers found what is likely a habitable planet in orbit around Alpha Centauri A. The discovery was made using the European Southern Observatory’s Very Large Telescope (VLT), which is located in Chile.

Mid-Infrared Images of Alpha Centauri A 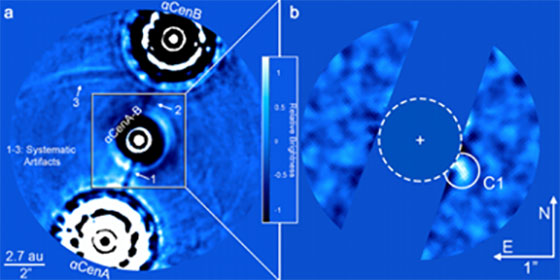 Because the planet still needs to be confirmed, it is only known as “C1,” which can be seen on the right side of the image above.

Needless to say, this is an incredible breakthrough that has amazing implications.

With some advanced propulsion technology that will likely be available to us within this decade, it is conceivable that we can send a reconnaissance spacecraft to the newly discovered planet. And we may have the findings sent back to us within some of our lifetimes.

It may be a long shot. But I tend to be an optimist and think exponentially when it comes to technological advancements.

And I have to admit that seeing the surface of another habitable planet evokes such incredible curiosity. Imagine what would happen if the spacecraft sent back pictures of previously unknown forms of life?

I’m excited to see what else will come of this research.

One of the largest players in the autonomous driving space is a company called Pony.ai. It has actually been a while since we last talked about this fascinating startup.

Last March, Toyota invested $400 million in the company. And since then, it has continued to make great progress.

As a refresher, Pony.ai was founded by two key executives. One of them came from Baidu, which is China’s equivalent of Google. The other came from the Google X laboratory. Some of you might recall this eventually became Google’s self-driving division, Waymo.

These two executive engineers founded Pony.ai in 2016. In just four years, Pony has quickly become one of the most valuable autonomous vehicle companies in the world.

And that’s largely thanks to its Series C venture capital (VC) round that closed earlier this month. Pony.ai raised a massive $367 million in its Series C round. As a result, the company is now valued at $5.3 billion.

And there’s a key reason why this company is so valuable.

Similar to Tesla, Pony.ai is building a full technology stack that includes the autonomous driving hardware as well as the software solution. It doesn’t manufacture cars like Tesla does.

But it takes care of all the sensors, cameras, light detection and ranging (LIDAR) applications, and artificial intelligence software enabling self-driving cars. 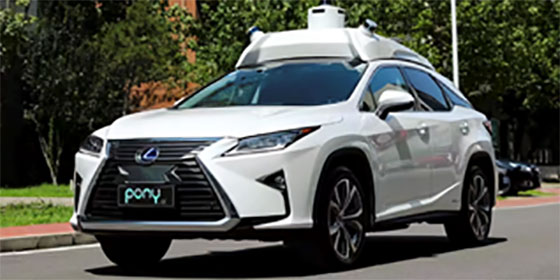 What’s also unique about Pony.ai is that it is not just focused on passenger vehicles. It is also using its technology for self-driving semitrailers for long-haul trucking. And it is also developing its own autonomous robo-taxi service. We can think of it like Uber’s ride-hailing service for self-driving cars.

What’s more, Pony.ai has a presence in both the United States and China. The company has operations in both Beijing and Guangzhou, China, as well as offices in Fremont, CA. That’s where Tesla’s U.S.-based factory is situated.

As a result, Pony.ai is the first company approved to test self-driving vehicles in both the U.S. and China.

The company has maintained strong venture capital backing in each of its fundraising rounds.

And we saw several late-stage investors participating in its Series C round. Both Fidelity and the Ontario Teachers’ Pension Plan were involved. These are very conservative private investors. They tend to invest in later rounds once it is clear that the target company has a clear path to an exit, which usually comes in the form of an IPO.

And that means it is time to add Pony.ai to our early stage watchlist.

I expect the company will go public within the next 12–18 months. It will do this either through a traditional initial public offering (IPO) or via a reverse merger into a special purpose acquisition corporation (SPAC).

(Almost half of all IPOs last year were SPACs. This area of the market is booming, and my prediction is that SPACs will have an even bigger year in 2021. If any readers want to find out my current top SPAC recommendations, go right here to learn more.)

Either way, Pony.ai would make a fantastic investment target at the right valuation. Let’s keep a close eye on this company in 2021.

Ford is going all in on self-driving technology…

Last week, we talked about Ford’s partnership with Google to put the Android operating system into Ford and Lincoln vehicles starting in 2023. To me, this is a Trojan horse for Google’s ultimate plan to get Waymo’s self-driving technology into popular car models.

And Ford’s announcement this week seems to confirm my suspicion.

Ford just announced that it will invest $7 billion in self-driving technology over the next four years. It is going all in.

Let’s be clear about something here. Ford is not an innovator in this space. Like most legacy incumbents, Ford has been slow to adopt new technology.

The fact that Ford is now committing $7 billion to self-driving technology tells us that the tech is much farther along than most people realize. Ford is late to the party, and it is trying to catch up.

We keep reading that self-driving cars are still 5–10 years away. Don’t believe it.

This big move by Ford shows us the auto industry knows that self-driving cars are about to become mainstream. That’s the only reason why Ford would be investing so much money in the space.

And it makes sense.

As we discussed last year, Ford has partnered with early stage company Argo.ai to test out self-driving cars using Argo’s technology. The pair made great progress on their self-driving car fleet in Austin, TX.

So it is all happening right now. We shouldn’t be surprised to see more and more self-driving cars on the road in the second half of this year.

And the rise of autonomous vehicles is presenting us with a massive investment opportunity right now. In fact, I recently tested out a Tesla myself to get a feel for how advanced our self-driving technology has become.

And in my research, I have identified Tesla CEO Elon Musk’s next big project in this space. This is something every tech-savvy investor should understand.

For details on what I think Musk has up his sleeve – and to see the video from my Tesla Autopilot demonstration – just go right here.

As I’m sure many readers know, Amazon’s artificial intelligence (AI)-enabled Echo smart home speaker has been incredibly successful. This is the cylindrical device that many consumers know simply as “Alexa.” 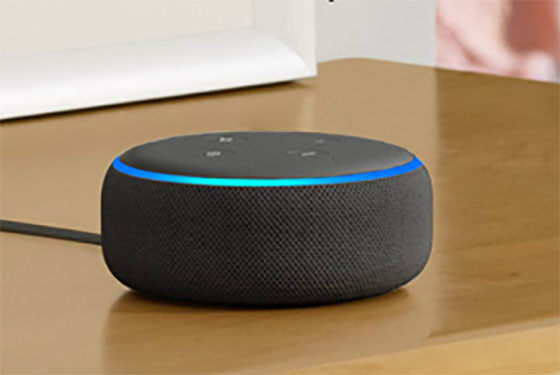 I find this device so useful that I have three of them in my home. I have two configured to speak English and another one that speaks Japanese. That’s right. Alexa can speak quite a few languages, but unfortunately it only speaks one language at a time per Echo.

Well, Amazon announced that it is developing a new Echo product. This one won’t be cylindrical. Instead, it will be a large touch screen that attaches to the wall.

This is different from the Echo Show devices currently available. These enable users to watch shows, read recipes, or videoconference with friends or colleagues in addition to Alexa’s usual features.

Instead, this wall-mounted touch screen will serve as a smart-home control panel. Alexa will be able to respond to all our requests involving our smart appliances, doorbells, thermostats, Wi-Fi devices, lights, cameras, security systems, and even smart HVAC (heating, ventilation and air conditioning) systems.

We have talked before about how Amazon’s aspiration is to embed itself deeper into our homes. That’s why it went on a smart home acquisition spree in recent years.

In 2018, it bought Ring. That company makes home security products including the Ring Video Doorbell. Then Amazon turned around and took a large stake in Ecobee, an early stage company that develops smart thermostats.

I use both the Eero and Ecobee products in my home. They’re fantastic and simple to use.

Each of these acquisitions gets Amazon more and more entrenched in our lives through useful and sticky products in the home. And this helps Amazon understand us and our consumption patterns better.

Here’s where this is going…

Eventually, Amazon will get to where it can predict exactly what products we need on a weekly basis. At that point, it will simply push the products out to us as it deems necessary. We’ll come home to packages on our doorstep that we never ordered but contain the things we need.

Of course, there will always be an option to return any items we don’t want. But Amazon’s AI will have already analyzed our consumption habits and determined that we would soon likely order the products ourselves.

It will just beat us to the punch. And as the AI improves, it will be able to send products that we know we’ll find useful but have never purchased before.

This reminds me of what Google hoped to do with its Nest Hub smart home product line. However, the Nest products underperformed Google’s expectations. And I know why.

I tested out the Nest Hub system when it launched and found it very awkward and difficult to use. The device is designed to first require us to give complete access to all of our data to Google before we are able to use it.

The software blocked me at every turn when I tried to do something as simple as just join a Google Meet call. This kind of one-sided, all-or-nothing product design is terrible for consumers.

On the other hand, Amazon’s smart home products are seamless and deliver great value. They set up quickly. And they don’t require consumers to share all of their contact information, the contents of their file folders and photos, and their email inboxes.

That’s why Amazon, ironically, is doing a much better job of getting into our homes than Google.

And while Amazon certainly has its own interests in mind here – more e-commerce, primarily – the company is far less invasive than Google. It’s hard for me to recommend any of Google’s smart home products, but I am personally comfortable with Amazon’s Echo.