The last few days have been really exciting for space exploration.

Not one, but two spacecraft entered the orbit of Mars.

On February 9, the United Arab Emirates’ (UAE’s) Hope spacecraft slipped into Martian orbit and sent back its first images of the planet.

The Surface of Mars 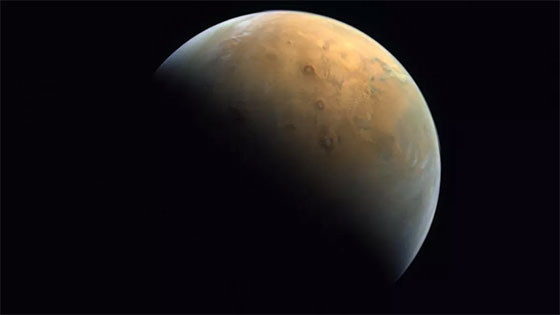 Congratulations to my friends in the UAE on their very first interplanetary mission.

And just one day later, China’s Tianwen-1 successfully entered Mars’ orbit. Unlike Hope, Tianwen-1 also has a lander and a small rover that will hopefully arrive safely on the surface of Mars within the next few days.

And if all of this excitement wasn’t enough, NASA’s Perseverance spacecraft is scheduled to touch down on Mars on February 18, around 3:55 p.m. EST. That’s just two days from now. I may have new photographs from the Jezero Crater on Mars to share with you as soon as this Friday.

Out of this world!

PayPal is getting serious about digital assets…

PayPal just announced that it is investing heavily into a new business unit that will focus exclusively on cryptocurrencies and digital assets. Its primary function will be to enable cryptocurrency payments across PayPal’s network. PayPal’s goal is to have this functionality in place by the end of this year.

This is a big move. It will allow any of the 29 million merchants that use PayPal to accept cryptocurrencies as payment.

Clearly, PayPal realizes that a large chunk of its user base now owns cryptocurrencies and digital assets. By building out the payment rails, PayPal will allow these users to spend their cryptocurrencies on goods and services for the first time. Buy and hold will no longer be the only option.

This is bullish for the entire blockchain industry. Being able to buy items on PayPal will enhance the functionality of cryptocurrencies tremendously. And this will help “legitimize” the digital asset space for some consumers.

A key nuance here is that PayPal plans to handle all settlement in fiat currency. That means the merchants accepting cryptocurrency payments will not be receiving cryptocurrencies. Instead, they will be paid in traditional currency.

This keeps things simple for the merchant as it won’t have to do anything at all. PayPal takes care of the complexity.

PayPal will convert the cryptocurrency into the merchant’s national fiat currency of choice and deliver that to the merchant. So merchants will receive U.S. dollars, euros, or yen for their sales.

This begs the question – what’s the point? Why go through the trouble if cryptocurrency payments are just going to be converted back into fiat?

And the answer is transaction speed.

On the other hand, cryptocurrency payments will settle in a matter of minutes or seconds. This will allow merchants to access their earnings faster. That’s always a plus.

This is a strategic move on PayPal’s part.

And the infrastructure required to enable cryptocurrency payments for all of PayPal’s merchants is quite substantial. PayPal will be busy in the coming months.

And our next topic takes this one step further…

MasterCard is one-upping both Visa and PayPal on digital assets…

Last week, we talked about how Visa is building application programming interfaces (APIs) that will connect cryptocurrency firms and traditional banks. With this move, Visa is hoping to route digital asset transactions through its network.

Well, MasterCard is going even bigger.

MasterCard just announced that it will give its merchants the option to receive cryptocurrency payments directly. And that option will be in place this year.

To make this happen, MasterCard is building out new cryptocurrency payment rails on its network, just like PayPal. But the difference is that MasterCard will not automatically settle these payments in fiat currency. It will give merchants the choice of what they want to receive.

This is a major move… and it’s one that was largely overlooked.

As we discussed last month, we are seeing a big shift of institutional capital into bitcoin.

And there’s no doubt more companies will follow suit. Key executives are starting to see bitcoin as a superior reserve asset for their corporate treasury.

So MasterCard is reading the tea leaves here.

As more companies start holding bitcoin in reserve, it’s likely that more merchants will want to accept it as payment for their goods and services. After all, the cheapest way to build a position in bitcoin would be to receive it as payment and hold it.

So we are starting to see the legacy financial system move into the digital asset space in a big way. The race is on to build out the infrastructure needed to support transactions and digital asset wallets.

All this infrastructure will be used to support the inevitable launch of the Federal Reserve’s central bank digital currency (CBDC). That will be the blockchain-based representation of the U.S. dollar.

And all this activity around payment infrastructure is a subtle sign that the Fed’s CBDC is coming faster than people think.

Moves like these are why I see state-backed digital currencies as inevitable. The cat is out of the bag.

But most investors are still missing the bigger picture. The rise of digital currencies will also raise the profile of blockchain technology. And investors positioned in a handful of blockchain stocks could see triple-digit returns in the years ahead.

I’ve outlined my favorite blockchain investments in a free presentation. You can watch it right here.

United Airlines has a survival plan…

And for our last topic today…

It’s no secret that the airline companies are not in good fiscal health. To say that 2020 was a bad year for the industry would be an understatement. And passenger airplanes weren’t a good business in the first place.

United Airlines is in an especially precarious situation. The company lost more than $6 billion in cash flow last year. It is now sitting on nearly $30 billion in long-term debt. And right now, the company is losing money on every flight it takes.

That’s why United Airlines has been furloughing its employees left and right. The company just sent out another 14,000 furlough warnings a few weeks ago.

And we don’t know if the airline industry will ever get back to what it once was. With the rise of remote work and remote business conferences, air travel may never return to its pre-pandemic levels.

But United Airlines has a plan.

United just placed a $1 billion order with electric aircraft startup Archer Aviation for 200 vertical takeoff and landing airplanes. These are like mini-helicopters designed for shorter flights. Its $1 billion order was also part of a strategic investment that United made into Archer.

These aircraft don’t need runways. They can take off and land from any flat surface. Once in the air, they can reach top speeds of 150 miles per hour. And they are designed for a range of about 60 miles.

And, of course, the aircraft is fully electric. The design is based on electric vehicles (EV).

We are talking about the next generation of air transport here. These electric airplanes are designed to shuttle people over short distances very quickly.

And it is easy to envision plenty of applications for these aircraft.

They could shuttle suburban commuters to and from their office building downtown several days a week. They could pick up travelers and fly them to their airport to catch long-distance flights.

And these aircraft could be especially critical in emergency situations. They would be perfect for patients who need to be transported to a hospital immediately.

So this is a burgeoning space that will be fun to watch in the coming years.

Archer Aviation expects to deliver its first shipment to United Airlines in 2024. I am excited to see what United’s first application will be.

As for Archer, the company just announced that it is going public through a special purpose acquisition corporation (SPAC). As we talked about at my Pre-IPO Code event last month, investing in SPACs will be an area of focus for us this year. If any readers would like to learn which SPACs I’m currently most excited about, go right here to find out more.

However, I must caution investors when it comes to Archer Aviation.

The SPAC is taking Archer public at a $3.8 billion valuation. Yet the company won’t have any revenue until 2024. And Archer is building aircraft. That means it will have high capital expenditures in the meantime.

That’s not the recipe for investment gains.

Simply put, I would not touch Archer Aviation until the company pulls back dramatically from its initial $3.8 billion valuation. The stock would need to pull back more than 50% before I would start to get interested.

The transportation industry is getting a major upgrade right now that is exciting to watch.

Consumer space travel, autonomous passenger drones, self-driving cars, hyperloops, supersonic jets, and even hypersonic travel that can shuttle us halfway around the world in less than an hour… It is all happening right now.

P.S. For those who missed it, there’s still time to view the replay of our Investment Accelerator event from last week.

At the event we talked about our investment focus at Brownstone Research for the coming years, and I highlighted what I see as the top five investment opportunities of the next five years.

I also made what I think is the best offer in the history of the financial newsletter industry. I invited viewers to join my Investment Accelerator program – modeled after Silicon Valley’s startup company accelerators – for the chance to access all of my investment research at practically no extra cost. It is designed to turbocharge investment gains going forward.

What’s more, members of my program will get guaranteed beta access to the two new research services I have in development right now. I will rely on feedback from beta testers to fine-tune these two programs before we open them to new subscribers.

The first is a proprietary trading system that utilizes artificial intelligence (AI) to spot the best fast-moving opportunities in the market. The second is a private placement service in which I’ll utilize my extensive network to bring private deal flow to my subscribers. There’s nothing else like it on the market today.

For readers who may be interested in joining our Investment Accelerator but missed the event, please watch the replay before it comes down later this week. You can find it right here.