What an absolute triumph!

At 8:09 p.m. ET, my managing editor, Van Bryan, sent me this photo of the Inspiration 4 launch. It was taken from South Florida about 150 miles south of the launch pad at Cape Canaveral. 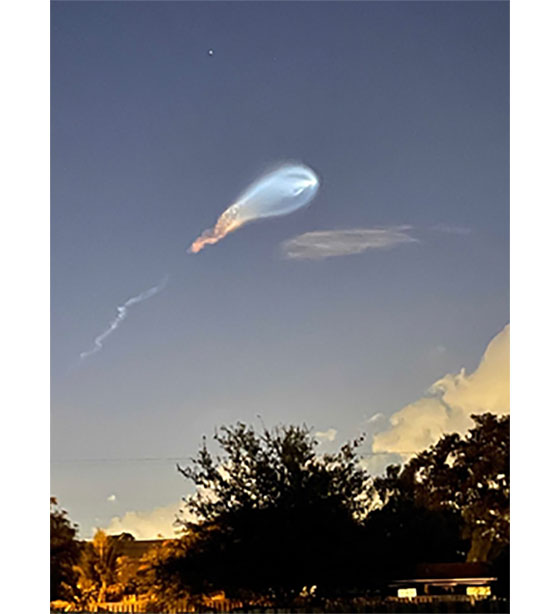 It’s an absolutely stunning picture of the Falcon 9 on its way to orbit. And it’s pretty remarkable that it was taken from an iPhone – another incredible piece of technology.

Over the last few months, it was certainly fun to watch Richard Branson and Jeff Bezos compete for the spotlight in their race to be “first” with commercial space tourism. Branson’s Virgin Galactic flights take about an hour and allow participants to experience zero gravity, but they never get above the Kármán line – the altitude recognized as being the delineation between Earth’s atmosphere and space.

Bezos’ Blue Origin flight does make it above the Kármán line, but it’s a much shorter flight. After all, unlike Virgin Galactic, Blue Origin launches on a rocket. It basically goes straight up and straight down… no dilly-dallying around. The trip to space takes about 11 minutes.

But this SpaceX flight is in a different league entirely. It makes the efforts of Bezos and Branson look like child’s play.

In yet another flawless SpaceX mission, Elon Musk and his team sent four civilians not only into space, but into orbit at an altitude higher than the International Space Station. In fact, the crew is now in orbit at an altitude higher than any human-piloted spaceflight mission to Earth’s orbit except for the Gemini 10 and 11 missions back in 1966.

If that isn’t enough, SpaceX returned the Falcon 9 booster to Earth so that it can be reused again.

And what may come as a surprise to many is that the entire flight, orbit, and return to Earth is fully autonomous. That’s right – the crew doesn’t have to do a thing. They just monitor the screens in the Crew Dragon capsule and enjoy the view for a few days.

All of these incredible accomplishments were made not by a powerful government agency or by a massive conglomerate, but by a single private company – SpaceX. Last night’s launch was epic. And it represents something so much bigger…

Innovation, drive, thinking outside of the box, reframing a challenge, and finding a way to do something that most thought to be impossible is what has already made SpaceX one of the most incredible companies of our time.

Yet this is just the beginning of what SpaceX will accomplish. Next up is sending its Starship to space.

And get this… It will catch the ship with giant “robot chopsticks” when it returns – vertically – back to its launch pad. SpaceX has already demonstrated that it can return the Starship back to the pad with a perfect landing, but “catching” the rocket would enable fast turnaround times for the next launch.

After that, to the moon and Mars…

The future of investing…

An early stage raise by a blockchain company called Syndicate just caught my eye. This is a company that I’m philosophically aligned with.

Syndicate just raised a solid $20 million in its Series A round. Notably, the round was led by powerhouse venture capital (VC) firm Andreessen Horowitz. That’s saying something.

And the work Syndicate is doing is incredibly exciting. It’s developing a protocol that will enable investors to team up with each other to form what are essentially funds.

Except they won’t be funds. They will be decentralized autonomous organizations (DAOs).

Put another way, Syndicate is building a platform that will enable investors to establish the blockchain equivalent of a limited liability company (LLC) that is legally able to hold and deploy capital.

The founders of this entity will determine what assets the entity invests in. And Syndicate’s technology will enable those investments to happen automatically as investors contribute funds. That’s the power of a DAO.

And here’s the kicker – anyone who wants to participate in one of these DAOs will be free to do so. There are no restrictions and no investment minimums. Then, whenever profits are taken, the DAO will automatically distribute them to each investor on a prorated basis.

I’m excited to see a company like this building the fundamental protocols that enable decentralized, democratized investing. It will empower anyone or any group of people to establish an investment vehicle that enables groups of people to band together and decide how to allocate those funds.

Investing is quickly becoming more of a social activity. A perfect example is what we recently watched happen with Robinhood. Large groups of investors essentially gamified investing and moved the markets with stocks like GameStop and AMC – all to the great detriment of many on Wall Street, who were heavily selling the stocks short.

There is a major shift toward social and community investing. Public.com is another great example, which I view as a buttoned-up version of Robinhood. Platforms like these are quickly overtaking the legacy incumbents like E*Trade and TD Ameritrade. Investors can join groups easily based on their own areas of interest.

So I expect Syndicate’s platform will be wildly successful. The concept in my mind has already been validated. Syndicate is just going to put it on a blockchain and empower it with smart contracts.

Needless to say, we’ll be keeping a close eye on Syndicate going forward.

How a 12-year-old made six figures on NFTs…

Next, I want to share with readers an amazing story about a 12-year-old kid who’s made nearly half a million dollars on non-fungible tokens (NFTs). This highlights how powerful the NFT trend is. And it also gives us a glimpse into the digital-first world that’s emerging.

The kid’s name is Benyamin Ahmed. His father is a computer programmer, so Benyamin became interested in computers at a young age. He was programming using basic HTML code by the time he was five years old. And he later advanced to JavaScript and more complex programming languages.

It was through this process that Benyamin became exposed to smart contracts and NFTs at age 12. And he was quickly taken in by the technology. As he put it, “I got fascinated with NFTs because you can easily transfer the ownership of an NFT by the blockchain.”

As a reminder, NFTs are digital collectibles. They allow us to cryptographically secure and authenticate unique assets or data on a blockchain. And smart contracts are contracts that self-execute on a blockchain once the agreed-upon parameters are met.

Benyamin’s statement on NFTs really highlights one reason why digital assets are valuable. Ownership can be transferred from one person to the next with just the click of a button. It’s a simple thing, but it’s powerful.

Compare this to trying to sell a gold coin or a piece of fine art. Those transactions often have to flow through intermediaries, making them time-consuming and inconvenient. Plus, the middlemen – the coin dealers and the art galleries, in this example – each take a cut of the sale.

In this context, it’s easy to see why anyone would love the idea of NFTs and digital assets.

Benyamin’s first foray into this world was to create a collection of Minecraft-avatar NFTs. Minecraft is a popular online game for younger kids.

The Minecraft NFTs didn’t make a bunch of money for Benyamin. But they gave him the idea to create his own collection.

In June, Benyamin minted a collection of 3,350 pixelated whales. They were inspired by the CryptoPunks and Bored Ape collections that we have talked about before. He called them the Weird Whale collection. Here’s a visual:

And that’s just the beginning…

Benyamin also programmed royalty-generating smart contracts into each of his NFTs. These contracts pay him royalties of 2.5% of the sale price any time a Weird Whale NFT trades on a secondary market. That happens automatically.

For example, if an individual sells one of these NFTs on OpenSea for $1,000 in ether (ETH), the smart contract automatically sends $25 worth of ETH to Benyamin. And this happens over and over again, every single time a Weird Whale NFT is sold.

How’s that for a brilliant business model?

As it stands, Benyamin has earned over $95,000 in royalties since selling the Weird Whale collection. That brings his total earnings up to $350,000.

And funds will only continue to roll in. I’m sure Benyamin will make at least seven figures on his NFTs. Maybe even eight.

This raises the question – what’s a 12-year-old going to do with all this money?

Here’s Benyamin’s answer: “I plan to keep all my ether and not convert it to fiat money. It might be early proof that, in the future, maybe everyone doesn’t [need] a bank account and just has an ether address and a wallet.”

Talk about a view of our digital-first future. Benyamin has raked in $350,000, yet he has never had a bank account… and he doesn’t particularly want one. He’s got his Ethereum wallet right in the palm of his hand. That’s powerful.

If there’s better proof that digital assets are the future, I haven’t seen it. And if any of my readers would like to learn how to dip their toes into NFT investing, then please check out my recent presentation here.

Checking back in on Agility Robotics…

We last talked about Agility Robotics back in August. That was when the company demonstrated that its bipedal robot could run five kilometers on a single battery charge.

This came not long after Agility Robotics launched its first commercial bipedal delivery robot back in April. It’s called Digit.

Digit is incredibly nimble. It can walk on uneven surfaces and climb stairs. It can also sit down, which is necessary for riding in the back of delivery vans. And Digit can lift and carry packages up to 40 pounds.

And now it looks like the robot is ready for prime time. Look at this:

As we can see, the latest generation of Digit robots is now capable of working in a warehouse setting. These robots can lift and move boxes as needed. And they can do this work 24 hours a day, seven days a week – minus a brief downtime for recharging.

With the current labor shortages, warehouse and dock work are two areas that have been hit the hardest. And it’s easy to understand why. This is hard physical labor that nobody really looks forward to doing. It’s boring and repetitive, and it takes a toll on the human body over time.

This is the perfect place for robots to step in. It doesn’t take much to imagine a warehouse with 100 of these robots sorting and moving packages all day long. And I doubt many warehouse workers will bemoan the fact that the robots will do all the manual labor.

So this is an exciting development. And it shows us just how far the field of robotics has come. We can expect to see the commercial adoption of functional robots accelerate tremendously in the months to come.

P.S. If you haven’t already, please make sure to mark this date on your calendar: September 22 at 8 p.m. ET. That’s when I’ll be releasing my confidential briefing…

The topic? A potential multitrillion-dollar windfall brought about by Apple’s latest launch. We all know how Apple’s big moves can have widespread impact across a number of industries… But no one is talking about the opportunity being triggered right now. That means this is our chance to get in early…

I want to make sure all my readers are aware of what’s happening. So please, go right here and sign up to attend for free.