Last month, a cyberattack on the Colonial Pipeline caused a week of chaos along the eastern seaboard of the U.S. due to gasoline shortages.

And this month, the latest target of a cyberattack is one of the largest suppliers of beef and pork in the U.S.

Cyberattackers successfully took down meat-packer JBS’s U.S.-based operations. Based in Brazil, JBS is the world’s largest meat processing company. Operations in Canada and Australia were also affected by the attack.

JBS processes about 25% of U.S. beef and about 20% of U.S. pork. Due to the scale and importance of its operations, even a day offline has a direct impact on the supply chain of the meat industry.

Prices are already increasing, wholesalers are scrambling to secure supply, and consumers will feel the impact at the grocery store or butcher.

This compounds the problems that the meat industry is already having with labor shortages. The persistence of stimulus checks is disincentivizing many people from returning to work. The impact is most prominent in jobs that pay an hourly rate.

The economy is growing and jobs are abundant. But there is still a widespread labor shortage even after almost 300 million shots of vaccine have been administered. These policies simply do not make sense.

The cyberattackers are getting smarter. Their technology is the same, but they are focusing on much larger, far more potentially lucrative targets… Targets that are vital to societies’ daily needs like oil pipelines, food distribution networks, utilities, and hospitals.

And by targeting the private sector, they are improving their chances of a payout.

Colonial Pipeline paid nearly $5 million to hackers to make the problem go away. Not a great precedent to set.

And that isn’t the real cost of the hack. Colonial Pipeline has already been hit with a class action lawsuit claiming that the company had deficient cybersecurity in place.

Imagine how much business Colonial’s customers lost because of the shortages. The amount hasn’t been named yet, but it will be a very large number. And I expect the same will happen with JBS.

Hopefully, the shortages at JBS won’t last as long as those caused by Colonial’s supply disruption. Food and fuel are arguably the two most difficult things to be short on.

As terrible as these attacks are, they are “good” for one industry – the cybersecurity industry.

So often the cybersecurity sale almost feels like insurance – something that we might need in the unlikely event of an attack. But that’s the wrong way to think about cybersecurity…

Having an up-to-date cybersecurity platform and process – whether an organization is public or private – is now arguably just as important as having food and fuel.

The end of an era for Silicon Valley…

As a reminder, semiconductor manufacturing is all about fitting more and more transistors into a smaller space. And we do that by making the transistors smaller and putting them closer together. That’s what the nanometer number refers to. In this case, IBM managed to get the transistors just 2 nm apart.

At the time, I said this was surprising because Taiwan Semiconductor Manufacturing Company (TSMC) – the largest semiconductor manufacturer in the world – was aggressively working at the bleeding edge on 3 nm technology.

How could it be that IBM was out in front of TSMC? IBM isn’t a threat, and it no longer has a semiconductor manufacturing business… but still?

Well, my instincts were correct.

Not to be outdone, TSMC just announced that it had a breakthrough in developing 1 nm chips. This is the most advanced semiconductor manufacturing process that’s ever been conceived. It pushes the limits of materials science and manufacturing technology.

This breakthrough came via a partnership with the Massachusetts Institute of Technology (MIT).

To get past the limitations of silicon at these ever-shrinking dimensions, MIT switched to a new material. It’s called semi-metal bismuth. This material helps reduce resistance and increase the current in the semiconductor.

Let’s stop and think about this for a second.

Silicon Valley was named specifically because silicon-based semiconductors revolutionized the entire technology industry. It’s what enabled the design of smaller and smaller electronic devices. We went from giant mainframe computers to desktop PCs to laptops to mobile phones and tablets thanks to silicon.

And now, to go smaller and keep Moore’s Law going, the industry must move away from silicon. It’s the end of an era. (For new readers, Moore’s Law says that the number of transistors in semiconductor-integrated circuits doubles every 18–24 months.)

That said, there is a trade-off here. Semi-metal bismuth is more expensive to manufacture than silicon. It will enable smaller and more powerful processors, but it will also push the price of semiconductors up.

We don’t yet know if this will be adopted and become mainstream as it is a couple of years away from production. But this is still an exciting view of the future.

TSMC is going into mass production of its 3 nm chips next year. We can expect it to roll out 2 nm chips in 2023.

And then by 2024 or 2025, we’ll start to see these 1 nm chips hit production. That will lead to some remarkable developments that will impact every area of high technology.

In fact, anything that benefits from small, powerful, and power-efficient processors will see major advancements once we hit 1 nm.

I’ve been spending more and more time researching materials science this year. The reality is that 1 nm production, and what comes after that, will be driven by new materials other than silicon.

This is an area where we’ll see some exciting breakthroughs in the next 12–24 months. And much of this will be driven by advancements in machine learning, which is particularly well-suited for designing and optimizing new materials.

It’s a positive feedback loop that will continue to accelerate the pace of technological development.

Snap just announced that it is acquiring U.K.-based tech company WaveOptics for over $500 million.

This is an early stage company that designs and manufactures something called waveguides. This is a key piece of tech used to power augmented reality (AR) displays, and it has become a common approach amongst the major players. It enables graphics and images to be overlayed on our view of the real world through the lenses in the AR eyewear.

This is a big move, and it doesn’t come as much of a surprise.

Snap has been working with WaveOptics for years. It’s the company that powers Snap’s fourth-generation Spectacles product. We talked about that last week.

Snap is planting a flag in the ground here. It is signaling to the industry that it is very serious about being a top player in the AR space and not just in software-based AR applications. This is a major jump when we consider that Snap started as a social media application.

And this is quite a big acquisition for a company like Snap.

As I write, Snap has about $546 million in cash and cash equivalents as well as $2 billion in short-term investments on its balance sheet. At a price of $500 million, this acquisition equates to 20% of Snap’s liquid assets.

Granted, Snap is paying half the purchase price in stock. It’s not an all-cash deal. Still, this is an aggressive move no matter how we look at it.

Waveguides technology is critical to all the major players working on augmented reality. By purchasing WaveOptics, Snap is also acquiring its extensive patent and intellectual property (IP) portfolio.

In a sense, this is a defensive move that will help protect Snap’s position in the industry. Any time you go to market with a technology that other big companies are using, it is good to have IP that can be traded and cross-licensed.

It’s not about asserting the patents. It’s about having chips that you can play with. This prevents the bigger companies from boxing you out or imposing onerous licensing terms that would make you uncompetitive.

So I’m very excited about this move. And I see it as bullish for Snap (SNAP).

The stock is now up 323% since I recommended it to Near Future Report subscribers back in August 2017. Its future is as bright as ever now that the pieces of the AR puzzle are falling into place.

We’ll wrap up today with a look at Ford’s newest venture into electric vehicles (EVs) with the F-150 Lightning truck. Here it is: 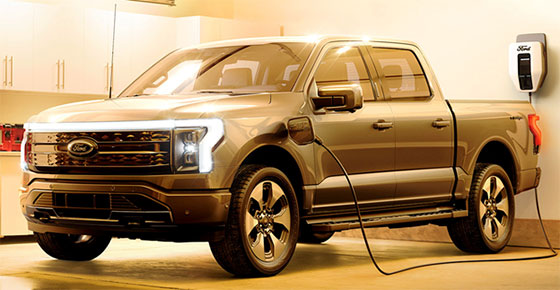 Above, we can see that the F-150 Lightning looks just like an electric version of the hugely popular F-150. There is one key difference, though – the “frunk.”

Making Use of Space Under the Hood 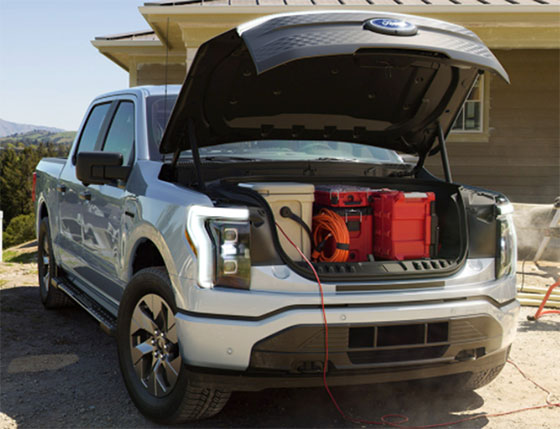 That’s right – the F-150 Lightning has a front trunk. Since there’s no internal combustion engine, cargo can be stored directly under the hood.

The Lightning is Ford’s response to Tesla’s Cybertruck announcement from 2019. Clearly, that announcement lit a fire under Ford.

And what I found particularly interesting is the fact that Ford is following the Tesla model almost to a T.

To start with, Ford is pricing the F-150 Lightning just under $40,000. That’s about where the Cybertruck is priced.

The acceleration capability of each truck is also very similar. The range each truck gets is about the same. And Ford is even offering a premium model with extended range. That’s a page right out of Tesla’s playbook.

The Lightning will also utilize an over-the-air software upgrade system just like Tesla. And it has an iPad-like control panel in the middle of the dashboard as well.

And get this – Ford is using the same preorder/deposit system that Tesla uses. The company is asking for a $100 refundable deposit to preorder the F-150 Lightning.

The only major difference with Ford’s approach is that it will offer the Lightning through its dealer network. By comparison, Tesla sells directly to consumers. This is a big win for the dealers, who were not at all happy about Tesla cutting them out of the loop.

And the biggest difference, of course, is that the F-150 Lightning will not come equipped with self-driving technology… At least not yet.

So this competition between the F-150 Lightning and the Cybertruck is going to be fascinating. We are looking at a clash between a radically new and innovative design versus a classic tried-and-true design.

Through 2020, the Ford F-150 was the best-selling vehicle in America for 43 straight years.

Will Americans continue to make the F-150 their chosen pickup truck as we transition into the world of EVs? Or will they go with a radically new design that’s never been seen before? Something that looks like it is out of a science fiction movie…

We can keep our eye on preorders to get a feel for the answer.

The Cybertruck hit one million preorders last week. Meanwhile, the F-150 Lightning has picked up 70,000 preorders right out of the gate.

The race is on.