A Note From Jeff Brown: Before we get to today’s edition of The Bleeding Edge, I wanted to mention a special seminar happening tonight.

Longtime readers of financial newsletters may know the name Tom Dyson. Tom is something of a legend in this industry. Like me, Tom recognized the investment potential of bitcoin long before anybody had heard of it. He urged his friends to invest when it was trading for around $124.

He’s gone “all in” on a new investment idea, one that he believes could create generational wealth for investors over the next few years. You’ll have to get all the details from the man himself. He’s sharing the full story tonight at 8 p.m. ET. Go right here to learn more.

To continue the discussion from yesterday, there has been even more progress toward a therapy for COVID-19.

Gilead has signed licensing agreements with five different generic drug makers to help it increase the production of remdesivir. As a reminder, Gilead just received emergency use authorization from the FDA to use its antiviral remdesivir to treat COVID-19. This came on the back of successful clinical trial results conducted in the U.S.

These agreements will allow remdesivir to be distributed to 127 countries and vastly scale up the manufacture of the drug.

This is a fantastic development, especially for countries that don’t have advanced health care facilities. Early use of remdesivir can greatly reduce the number of patients who need to be put on a ventilator.

A study just published by OpenAI caught my eye this week. It shows the incredible amount of progress happening in the world of artificial intelligence (AI) over the last few years.

OpenAI started as a nonprofit industry organization, partly founded and funded by Elon Musk, that is focused on AI. And the study it just put out demonstrates how efficient AI has become since 2012. Check out this graph: 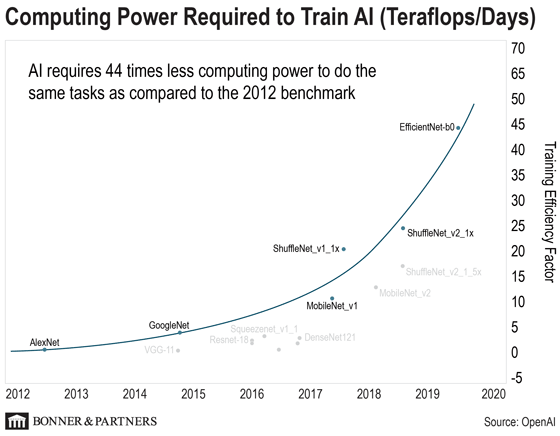 This data was put together by training AI algorithms on ImageNet classification. ImageNet is a catalog of 14 million images with 20,000 different categories.

Each AI algorithm has to successfully sort and categorize every image. And OpenAI measured efficiency in terms of how much computing power was required by an AI to reach a certain level of accuracy.

As we can see, the 2012 algorithm AlexNet wasn’t very efficient. GoogleNet was a little better in 2014. MobileNet demonstrated some improvements in 2017… and then efficiency exploded.

ShuffleNet was dramatically more efficient than MobileNet just a few months later. And EfficientNet was more than twice as efficient as ShuffleNet by 2019.

And if we look at the “Training Efficiency Factor” on the right-hand side of the graph, EfficientNet sits at 44. That means the AI requires 44 times less computing power to do the same tasks compared to the 2012 benchmark.

This is the definition of exponential growth.

And get this. Had we applied Moore’s Law, today’s AI’s would only be 11 times more efficient compared to 2012. That means the advancements in AI algorithms are advancing far faster than Moore’s Law.

Remember, Moore’s Law is typically the “gold standard” for exponential growth. For AI to be progressing far faster than Moore’s Law gives us a view into how quickly a world where almost everything is enabled by AI will come.

And here’s what we should take away…

More efficient AIs can solve problems much faster with much less computing power. That means it is far cheaper to run an AI today than it was just a few years ago.

As a result, governments and large corporations no longer have a big advantage in this space. Today, small companies and even individual engineers can use, develop, and experiment with AI.

That evens the playing field. And it is already leading to rapid advancements in the space. There is even a large set of off-the-shelf, open-source (free) AI algorithms that pretty much anyone can use. We don’t even need to be an AI specialist to use them.

And for us as technology investors, our ears should perk up any time we see such a massive jump in efficiency like we are seeing with AI since 2017.

We should ask – what’s causing this? And is it investable?

In this case, the answer is simple. 2017 is when we started to see breakthroughs in hardware (semiconductors) that were specifically designed to run AI.

That trend has not only continued but accelerated. AI and machine learning (ML) semiconductor companies are one of the hottest areas in venture capital investment right now.

And similar advancements took place with graphics processing units (GPUs), which are the workhorses for the AI/ML industry.

One of my favorite companies in this space is NVIDIA (NVDA). Readers of my investing service The Near Future Report are sitting on gains over 150% in about a year with NVIDIA. And the stock is up more than 1,000% since I originally recommended it back in early 2016.

And this trend is just beginning.

The race is on to develop the best AI-specific chips. And more than a few companies are doing great work in this space. I expect a few of them will become investment targets in my monthly investment services.

Zoom is back in the news…

But it was discovered that Zoom had some serious security problems that allowed anyone to drop in on a call, and it even had a data-sharing agreement with Facebook. We talked about these security weaknesses last month.

The market overlooked these issues with the expectation that Zoom would fix them. And Zoom appears to be on the case.

First, the company put out a software update to improve security. And then Zoom went out and acquired a private company called Keybase. Keybase specializes in end-to-end encryption – exactly what Zoom’s platform was lacking.

But here’s what Zoom won’t tell you about its acquisition.

This move is as much about public relations (PR) and goodwill as it is about Keybase’s technology.

I worked as a technology executive for nearly three decades. And when a company makes a mistake, it’s not enough to quietly fix the problem with a software update. The company has to “show” the market that it’s serious.

And how better to do that than to make an acquisition that grabs headlines? It’s something that Zoom can point to as an example of how it took action to address its weakness.

It’s good that Zoom is serious about fixing this problem. But make no mistake, the positive PR was a major driver with this move. The company could have easily implemented the technology in-house.

As a final note, Zoom’s stock (ZM) is massively overvalued right now. It currently trades at an enterprise value (EV)-to-sales ratio of 73. This implies that the company is worth 73 times more than its annual revenues. That’s insane.

Anybody buying ZM at these levels is going to lose a fortune.

Mark Zuckerberg has developed his ultimate “heat shield.” Here’s what I mean…

In recent years, Facebook has struggled to develop policies to determine what content should be allowed on its platforms. It has often been criticized for being highly biased in what it allows on the platform. And the company has struggled to manage and remove highly inappropriate content.

The simplest approach would be to allow anyone to post anything and leave the responsibility with the users. Sadly, that’s not realistic today, as horrific things have already been posted on Facebook. With more than two billion daily users, many of whom are children, there has to be some level of content moderation.

Governments expect companies like Facebook to police inappropriate content. Companies would get immense backlash if they didn’t. Yet they also get backlash for the policing decisions they make. It’s a classic catch-22.

And that’s why Facebook’s plan is so shrewd.

It has created the Facebook Oversight Board, which will operate independently of the company. The board is composed of 20 people who will review all decisions about which content should and should not be allowed. And it will ultimately put in place specific policies detailing what content is not acceptable.

In return, Facebook has set up a $130 million trust that will pay the board members for their time.

What Facebook’s really doing here is abdicating its responsibility to a third party. When the board makes decisions, Facebook – and Mark Zuckerberg, in particular – can say, “It wasn’t us.”

The company can use the board’s independent status as a shield against backlash. It’s a smart move given Facebook has been stuck in a no-win situation.

And here’s where it gets fascinating…

The board is composed of people from a wide range of backgrounds and philosophical beliefs. There’s a former Nobel Peace Prize winner. A former prime minister of Denmark. There are constitutional lawyers, staunch conservatives, radical liberals, and even a libertarian presence from the Cato Institute.

These are people with very different worldviews, who will have a hard time agreeing with each other. It’s certainly going to be fun watching this play out. We’ll check back in on this from time to time.