Not surprisingly, mobile gaming was a winning sector throughout the pandemic. Not only was 2021 a record year for the industry… For the first time ever, eight mobile games broke through the billion-dollar mark in spending.

The first three games – PlayerUnknown’s Battlegrounds Mobile, Honor of Kings, and Genshin Impact – are names that we probably won’t recognize, as they are most popular in Asia. But Roblox, Pokémon GO, and Candy Crush Saga are probably the names that we do know. 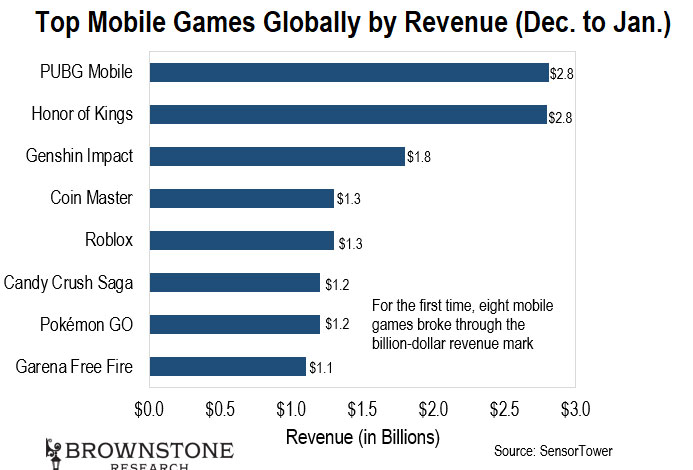 The popularity of mobile games came as a surprise to many. But as our smartphones became more powerful, they could support more compelling graphics and gameplay.

The pandemic – which gave so many of us extra time throughout the day – provided a reason to spend more time on our phones. And gaming was an easy outlet to escape the insanity of what has been happening.

As a result, mobile gaming has grown into a massive business. 2021 brought in around $90 billion in spending. Given the current trends, it’s likely that the industry will break through $100 billion this year.

And it makes sense. After all, smartphones and tablets are far more accessible and ubiquitous than gaming consoles.

Mobile gaming has become so valuable that gaming powerhouse Take Two Interactive announced early in the week that it would be acquiring mobile gaming company Zynga for an impressive $12.7 billion. Once the deal closes, it will be the largest acquisition in the history of gaming.

Zynga mastered the business model of free-to-play gaming, which accelerated adoption and, ultimately, spending on mobile games. Take Two will use Zynga as a platform to bring its own game franchises to mobile.

This trend will continue. With each new generation of smartphones, the computing performance improves, making for even more compelling gaming experiences.

And as the industry takes one step further and adds in play-to-earn (p2e) capabilities, consumers will have just one more compelling reason to spend more time in these online worlds.

It’s all part of a broader move toward tokenization that’s causing a paradigm shift in the global gaming market. Readers who are interested in learning more about this trend can catch up right here.

A new player in the “grab-and-go” technology arena…

There is an interesting new player in the “grab-and-go” space.

We have talked at length in The Bleeding Edge about Amazon Go stores. They are stores outfitted with artificial intelligence (AI)-powered cameras on the ceiling that keep track of every item shoppers take off the shelf.

This way, when consumers are done shopping, they can simply walk out of the store. There’s no checkout process. Instead, the system charges their account automatically for the items they selected.

It’s a fantastic consumer experience that I’ve experienced myself. Amazon has employed this technology in 35 stores across the U.S. and the U.K. And it has already announced a licensing deal with a supermarket chain in the U.K.

But Amazon isn’t the only player in this space. An early stage company called Veeve is trying to stake its claim with a decidedly different approach.

Veeve developed an AI-powered shopping cart that combines the simplicity of barcode scanners with an intelligent tablet that can understand individual consumers. 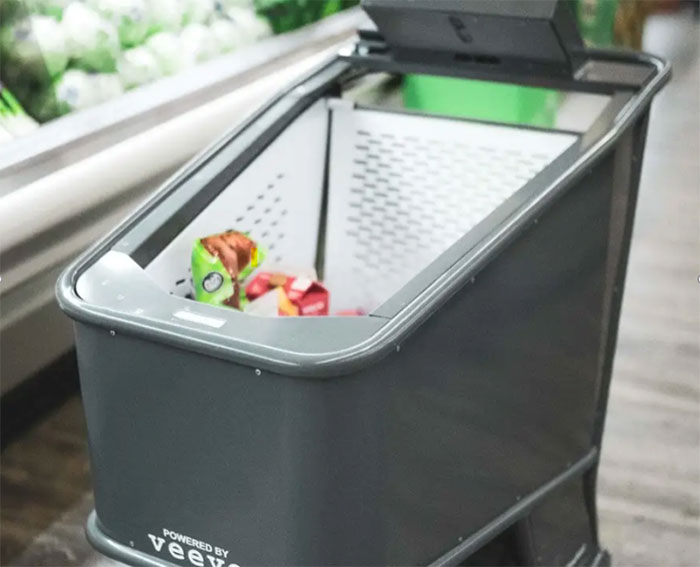 Here we can see that the tablet faces the consumer as they shop. It keeps track of the items as consumers scan them in.

Regular readers may notice that this looks a lot like Caper AI’s smart cart. We talked about it back in November when Instacart acquired Caper for $350 million.

Veeve’s cart works in much the same way. But it goes one step further – the cart helps consumers save money. The system keeps a database of all available coupons, and the cart will automatically apply the discount when shoppers scan an item.

So even if consumers aren’t aware of a coupon, Veeve’s cart will still apply it for them. The cart can also notify shoppers which products are on sale.

And, of course, consumers can create an account to save their information. This allows the cart to learn their typical buying patterns. Once it does, the cart will remind shoppers if they appear to have forgotten a certain item that they normally purchase.

So here we have a lower-cost alternative to grab-and-go installations.

My personal preference as a consumer is Amazon’s camera-intensive approach because it abstracts away all the complexities and makes the consumer experience as simple as possible. Consumers don’t even have to scan the items they want. You can just take what you want and go.

However, the costs would be prohibitive to install a system like that throughout a large store. In contrast, Veeve’s technology enables a similar consumer experience without such an expensive equipment installation. So from a business perspective, this approach will likely lead to faster adoption.

And that’s where Veeve sees its opportunity.

The company’s CEO, Shariq Siddiqui, spent eight years at Amazon. He was there when the first Amazon Go store opened in 2018. And while he loves the tech, Siddiqui doesn’t think it can scale quickly. That’s why he launched Veeve as an industry alternative.

And Veeve is starting to catch on. The company has already inked partnerships with grocery store chains Kroger and Albertsons. Those stores are now using Veeve’s smart carts at some of their locations.

So this is absolutely a company to watch going forward.

Bigger picture, we can expect grab-and-go technology to proliferate rapidly this year. The ongoing labor shortages are a major catalyst – many retail stores are struggling to stay fully staffed.

And that’s going to lead to the rapid adoption of this kind of technology.

This is the future of transportation…

As regular readers know, I run a “prediction series” around the holidays every year. In it, I forecast what I think we will see in the world of high tech over the course of the next calendar year. This has been a tradition since we launched The Bleeding Edge in 2019.

And one of the big predictions I made in my 2021 series was that Google’s self-driving subsidiary Waymo would ink a licensing deal with a major carmaker.

Well, 12 months came and went, and no Waymo deals had come. I thought I had missed this one.

But then, on December 28, it happened. Waymo announced a licensing agreement with major Chinese automaker Geely.

Geely designed a vehicle specifically for autonomous ride-hailing fleets. It’s called Zeekr. And it will be equipped with Waymo’s hardware and software solutions to enable full self-driving capabilities.

Here’s a look at the prototype:

Then as we look at the second image… there’s no steering wheel or pedals. The car will be fully autonomous. And it is optimized for ride-hailing services. The interior is open and roomy. It can comfortably fit six people at a time.

We don’t have any additional details on what Geely’s ride-hailing services will look like yet, but clearly, the design makes perfect sense. This is the future of transportation.

This is a keen area of investment interest for me as the entire transportation industry is being disrupted right now.

We’re on the cusp of an incredible transformation in cars, trucks, planes, and even spacecraft.

And we want to make sure that we have exposure to these incredible trends. For my most recent recommendations, go right here for the details.

And I’m happy to take a victory lap on my prediction. I hit it with three days to spare. Good fun!

DeepMind does it again…

We’ll wrap up today with yet another major breakthrough from Google’s AI division DeepMind. This one comes on the back of DeepMind’s AlphaFold2 release we discussed last summer.

As a reminder, AlphaFold2 is AI-powered software that can accurately predict the folding of a protein, based solely on its amino acid sequence, with 92.4% accuracy. And it very well may create a “golden age” for biotechnology.

Well, the DeepMind team just released incredible new research around something called density functional theory (DFT). I know this sounds obscure, but it has tremendous implications for both the biopharma and the materials science industries.

And it’s the chemists that are particularly excited about this breakthrough.

DFT is an approach that approximates where a molecule’s electron distribution is at any given time. This is important because knowing where the electrons are offers valuable insight into the molecule’s structure, properties, and reactivity. This is critical knowledge for chemists working on models of molecules.

Up to this point, chemists have been working with a flawed model. Legacy DFT tools work OK for some molecules, but they provide inaccurate predictions for others.

To solve this problem, DeepMind created a neural network that utilizes machine learning to enhance DFT predictions. It calls the neural network DeepMind 21. And as we probably expect, it materially outperformed existing DFT methods in a host of tests.

Here’s one example to illustrate:

Here we can see a legacy DFT model on the left with its predictions marked in purple. If we compare it to DeepMind’s projections on the right, we can see that both models predict a similar structure for Adenine.

But look at the predictions for Thymine – they are drastically different. And it turns out that DeepMind 21’s model is far more accurate.

The key thing to understand here is that electron distribution within a molecule directly impacts the quantum mechanics of that molecule. As such, the better we can predict where the electrons are using DFT, the more we can understand about how molecules interact with one another.

And that means this has the potential to be a major boon for biopharmaceuticals. The biotech industry can use this tool to develop better therapies capable of safely treating a wide range of diseases.

This will also inform materials science designs. That’s something I’m especially excited about. I can easily envision this leading to lighter, stronger, durable, and reusable materials for aerospace applications.

It could also inform semiconductor design and battery technology. Perhaps DeepMind 21 will lead to the next generation of batteries.

So this is a big discovery from the DeepMind team. And it’s another great example of using AI to solve complex real-world problems.

It’s why I’ve spoken so often about the impact of the convergence of AI with other technologies like biotech and more.

The convergence of these technologies will change our world for the better… and give us enormous profit potential. To learn more about one of my top convergence companies right now, simply go here for the full story.