It was long overdue, and it took an epic year of cyberattacks for it to happen.

2021 rang in the best year ever for venture capital investment into the cybersecurity industry. It’s surprising that it took this long for the “money” to realize the scale of the opportunity and the need for the next generation of cybersecurity. 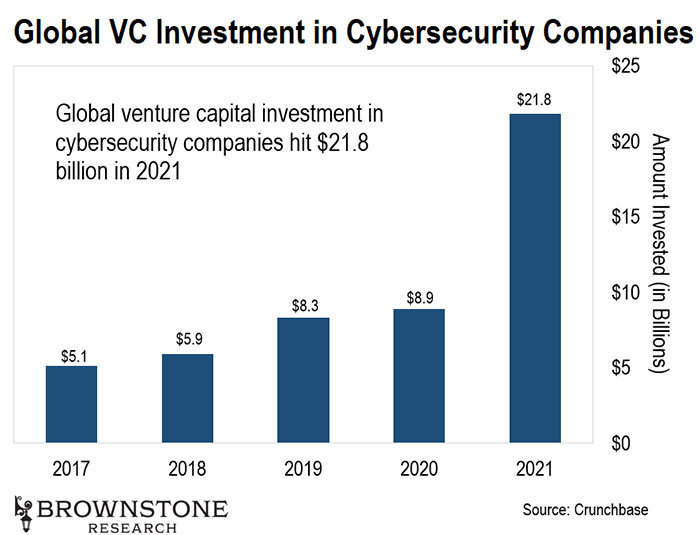 Last year was by far the worst year I have ever seen for cyberattacks.

We saw the SolarWinds hack that was one of the worst in cybersecurity history. Then there was the Microsoft Exchange server breach, the REvil ransom attack, the hack of the Colonial Pipeline that caused gas shortages reminiscent of the ’70s. Kaseya as well. And the most recent one that I wrote about was the Log4j debacle. Not to mention the billions of consumer data records that were stolen in data breaches throughout the year.

The scale of what happened in 2021, with respect to these cyberattacks and how they impacted our country’s economy, our elections, social unrest, and division is impossible to understate. And we still haven’t uncovered the extent of the damages, let alone cleaned up the mess.

Plato said that “our need will be the real creator.” In time, this morphed into a better-known proverb: “necessity is the mother of invention.”

Well, we are certainly in need of the next generation of cybersecurity technology.

Finally, the venture capitalists recognize how large the necessity is, and also the scale of the opportunity. Last year, venture capital investment into the cybersecurity industry jumped 144% from the previous year to $21.8 billion. And the fourth quarter of last year was also a record, bringing in $7.8 billion.

As we enter 2022, the pipeline of later-stage private cybersecurity companies is exciting. I can see a handful of fantastic companies that are in a position for potential IPOs or acquisitions. I can’t wait to recommend some of them.

And this sudden interest in cybersecurity will likely generate institutional interest in many of the best in class publicly traded cybersecurity stocks in the market today. Near Future Report holding Palo Alto Networks is a perfect example. It had a fantastic year last year, and I expect even better news this year.

This is a market sector worth having exposure to, as I am certain the attacks are not going to stop… And the guiding words of Plato will ensure that our network and data security will improve rapidly over the course of the next couple of years to avoid a repeat of 2021.

And while these new technological advancements unfold, the one thing we can do personally is make sure all of our software is up to date on our phones, PCs, tablets, and routers. It’s also smart to avoid opening any text or email that we receive that we don’t know who the sender is.

Also, check the actual email address of the sender by clicking on it to see if it was sent from an address associated with the company. Doing so can help us avoid clicking on malicious links that result in us downloading nefarious software onto our computers.

Autonomous driving company TuSimple just hit a major milestone. Right before Christmas, one of its self-driving semi-trucks drove itself 80 miles from Tucson to Phoenix, AZ. 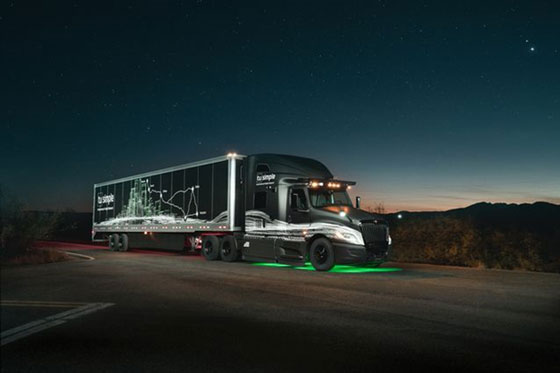 Regular readers may recognize the name of this company. We last checked in on TuSimple back in December 2020 after a major $350 million venture capital (VC) round.

To bring new readers up to speed, TuSimple is focused on fully self-driving semi-trucks that can ship goods across the country – no driver necessary. And its technology will allow “pods” of trucks to drive closely in line with each other on the highway, taking advantage of the air stream to reduce fuel consumption. Racing fans will know this as “drafting.”

Pair this with the fact that self-driving trucks can operate 24 hours a day, and the economic benefits are stunning. TuSimple’s trucks could reduce shipping costs by a whopping 40%.

And, of course, TuSimple’s mission is more important than ever given the ongoing labor shortages we are dealing with. There simply aren’t enough truck drivers to handle all the freight that needs to be distributed right now. That’s why goods are piling up at American ports.

So I’m incredibly excited about TuSimple’s big milestone. And here’s the key – the truck navigated the entire journey from Tucson to Phoenix autonomously.

We aren’t just talking about self-driving on the highway here. That’s become relatively straightforward with today’s technology. Instead, TuSimple’s truck handled lane changes, on-ramps, off-ramps, and even traffic lights – all on its own.

I’ve said many times before – self-driving vehicles aren’t years away. They are here now. And most people will be amazed at how quickly they proliferate. In fact, TuSimple now has 6,875 reservations for its self-driving trucks. There’s a lot of demand building up as we speak.

We will certainly be tracking this company and the overall self-driving trend closely going forward. It’s going to be a big year for the industry.

If anyone would like to learn more about how to invest in this space, simply go right here for more details about my top recommendations.

The automotive industry has a big problem with exported cars right now. It’s easy to ship new cars to ports in another country… but it’s hard to get them on and off the ship.

That’s because a dock worker must physically drive each car from the docks’ unloading station to a designated parking lot nearby. Only then can the cars be loaded onto trucks and distributed around the country.

This has always been a pain point in the industry. It is a very inefficient, time-consuming, and manual process. And it’s magnified now with the ongoing labor shortage. There just aren’t enough people to move all the cars off the docks.

That’s where Seoul Robotics’ Level 5 Control Tower comes in. It consists of a system of sensors and transmitters that can be installed around the docks. These sensors highlight the route from the unloading station to the parking lot.

This system pairs with artificial intelligence (AI) deployed in the cars that can execute basic self-driving and self-parking functions. This allows the AI to guide each car from the docks to its designated parking lot by using the mesh network of sensors.

And here’s what makes this economical on a large scale – the cars don’t need to be outfitted with all the hardware necessary for self-driving on the open road. Instead, the control towers handle everything… they communicate with the AI to get the cars where they need to go.

This is an inexpensive way to imbue normal cars with self-driving abilities just to get them on and off the ships. And this system could allow thousands of cars to be unloaded in less than an hour. That’s far faster than it could be done previously, even before the labor shortages.

So this is another example of how AI can solve very complex problems. I’m interested to see how quickly this tech will be adopted at ports around the world. Help is on the way.

A powerhouse gaming company is getting into NFTs…

Square Enix just sent out a strategy letter that sent shockwaves through the gaming industry.

This is a traditional gaming company that developed the Final Fantasy franchise – one of the most successful game series of all-time – as well as many others. And it just released plans to invest heavily in blockchain gaming and non-fungible tokens (NFTs).

What I love about this is that Square Enix’s strategy letter represents the most aggressive stance any traditional gaming company has taken with regard to blockchain technology and NFTs. Clearly, it seems that the industry will be forced to go in this direction. It just makes too much sense.

If we think about the economics of the gaming industry, it revolves largely around one-time sales. Companies like Square Enix release a new game and sell it for $60 or $70. Then they go to work on making the next game or the next sequel. Most games do not provide a material recurring revenue stream – at least not upon release.

Many games already contain items and gear for players to use as they move through the game. These are things that convey certain benefits or skills within the game.

Well, Square Enix could create these in-game items as NFTs that enable individual ownership. The company could also create a marketplace for players to buy and sell these NFTs with each other. And obviously, this dynamic would allow market prices to form… The most useful and most rare NFTs would sell for the most money.

This would allow players to make real money from these NFTs… which means they can earn income just by playing the game. That makes it “sticky.”

What’s more, Square Enix could program each NFT using a smart contract so that the company would receive a small royalty every time it sold. That would create a recurring revenue stream.

For example, let’s say a certain weapon in Square Enix’s next Final Fantasy game is programmed with a 2.5% royalty attached. Every time a player sells the NFT that corresponds with that weapon, Square Enix would receive 2.5% of the purchase price.

Now let’s extrapolate that out to thousands of items across many different games. The revenue stream could become material very quickly. And remember, the players can make money with this too. Everybody wins.

So there’s a huge monetary incentive here. That’s why most gaming companies will move in this direction. Interestingly, much of Square Enix’s fanbase took issue with this announcement. It seems they don’t want to see NFTs incorporated into their favorite games.

And we can understand that. Many gamers are passionate about their favorite games and are reluctant to see their experience change in unfamiliar ways. They don’t want to deal with the additional complexities that NFTs would bring.

Still, the monetary incentives are too big to ignore. We are the start of a massive trend here, and I think we’ll see a lot more NFT-based games hit the market this year.

And to learn about how to play the NFT trend as it grows in 2022, simply go right here for more information.