It’s hard to believe that a whole pipeline could be shut down remotely by a single person sitting behind a computer screen. They might even have been wearing their pajamas. 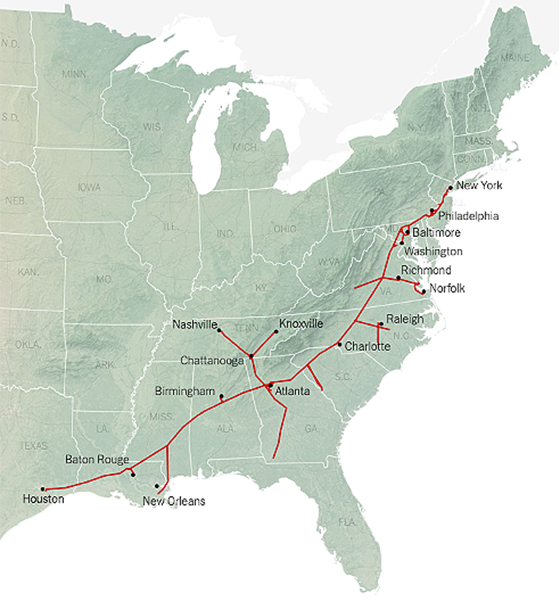 The Colonial Pipeline is a vital piece of U.S. infrastructure that runs from Houston all the way to New York delivering gasoline, diesel, jet fuel, and heating oil along the Eastern seaboard on a daily basis.

And it was hacked a few days ago. The FBI has named a well-known cybercriminal group called Darkside as the culprit. The group develops ransomware that can be used to shut down computer systems and extort companies and governments for large ransoms.

The pipeline is down, and this is causing severe supply chain ramifications in the Eastern part of the U.S. Many gas stations are completely dry, and long lines for fueling up have become very common. It’s a mad rush to get a full tank to avoid running out.

And prices have gone through the roof. Two days ago, I paid more than $4 a gallon.

After the recent SolarWinds and Microsoft Exchange server attacks, we would think that a wave of network security upgrades would have happened… but this hasn’t happened yet.

And often, it is the oldest industries like infrastructure and utilities that are the slowest to take these threats seriously. Hopefully, this will be the catalyst that the industry needs.

It is not for a lack of trying by the cybersecurity industry. The tech is widely available to protect the networks of these vital organizations, and cybersecurity companies have been talking about these threats for years.

Yet there is a bias that exists in the industry that tells us, “Everything has been fine… We haven’t had any trouble.” This thinking has led to a lack of will to bring security systems up to date.

As consumers and businesses don’t have gas to fill up their cars and trucks, or electricity to fuel their electric vehicles and homes, I suspect that the bias will swing quickly in the other direction.

And that should create some tremendous opportunities for the best cybersecurity companies.

Several eastern states are in for some pain over the next few days… But hopefully, the pipeline will be back up and running by the end of this week.

Until then, it might be a good idea to keep some fuel in the tank and avoid unnecessary trips just in case of an emergency.

The new space race is heating up…

We talked Monday about the uncontrolled descent of China’s Tianhe rocket booster back to Earth. Fortunately, the event did not cause any mayhem, but it was a pretty close call.

Today, let’s dig a little deeper and understand the broader context of the mission.

The Tianhe mission put into orbit the first module of what will become China’s space station. China plans to build it out with additional modules over the next 18 months.

Once finished, China’s space station will be about one-fifth the size of the International Space Station (ISS). And it will be the only other habitable structure in space.

So this is an exciting development. China has planned 10 more missions between now and the end of next year to complete its very own space station. It is an aggressive timeline.

And surprisingly, China made a big deal of this project. There were livestreams of the Tianhe launch on YouTube. That’s uncharacteristic. The publicity is intentional; it wants the world to know.

This has become the next-generation space race. China views having its own space station as critical to advancing its government’s interests.

And Russia is now getting in on the action, too. Russia plans to cease contributing funds to the ISS. Instead, it will work to build out its own space station. Russia’s target date for completion is 2030.

At that point, there will be three major space stations – one controlled by China, one by Russia, and one by the United States. The race is on.

And this is also big news from an investment standpoint.

A few years ago, private investment in early stage aerospace companies was pretty meager. SpaceX, largely due to Musk’s presence, was the one standout that could raise large funds for its ambitious plans.

Aerospace was largely something that was seen as “too hard” and “too expensive.” Many believed it took “too long” to get a return on investment.

Fast forward to today, and venture capital (VC) is flooding into this industry. VCs invested $8.7 billion in private aerospace companies in the last year. And that number is only going to increase in the years ahead given the success that we’re seeing in the field.

What’s more, 11 space-related companies have either gone public or have announced plans to go public over the last 12 months. With momentum like this, I can see that we are in what will almost certainly be a decade-long trend of accelerated innovation and breakthroughs.

And soon, some of the top companies powering this trend will become investment targets. We’re going to have a lot of fun following the new space race in the years ahead.

An update on Starlink…

Speaking of space, SpaceX’s Starlink provided an update on its business. The company now has 500,000 preorders for its satellite internet service. That’s quite impressive.

To bring new readers up to speed, Starlink launched the beta version of its satellite internet service back in November. And it allowed consumers to place $99 preorders for the service once it becomes available in their area. I even put my name on the list.

Here we see CEO Elon Musk employing the same strategy he used to sell Tesla Model 3s. Starlink raised nearly $50 million in revenue just in preorders. That helps finance some of the launch costs, and it gets people excited about the product. It’s a beautiful strategy.

And remember, Starlink’s satellite internet service will cost $99 per month. If all 500,000 preorders convert to subscribers, Starlink will be raking in nearly $50 million every single month right from the start. That’s not too shabby.

From there, Musk’s prediction of $30 billion in annual revenues by 2025 comes into play. That would take about 25 million subscribers. And if Starlink can get to that point, it would be generating more revenue than SpaceX.

To support the preorder demand, Starlink just launched 60 more satellites. And something in that announcement caught my eye.

Starlink admitted that the performance of its satellite internet service will be negatively impacted as it brings on more users. If the service does indeed attract millions of users, performance and download speeds will diminish.

We have talked about that dynamic in these pages before. It is a nuanced point that most have missed. But this was the first time Musk mentioned capacity limitations explicitly.

That said, I’m excited to give the service a try. Based on the number of preorders, it seems a lot of other people are as well. Clearly, a lot of folks are not happy with the internet service they currently have.

Of course, Starlink isn’t going to be as fast as our standard cable TV internet service. But it will be a great option for people in rural, less population dense areas.

Checking back in on the historic app store battle…

We talked in March about how Epic Games’ lawsuits against Apple and Google over their app store commissions are having an impact in the industry.

For the sake of newer readers, Epic Games is the parent company of hit online multiplayer game Fortnite. And it filed lawsuits against Apple and Google for “anti-competitive behavior and monopolistic practices” with their respective app stores last August.

It has been interesting to watch this case play out. Now we’ve got some updates on how Epic Games and Apple are positioning themselves.

Epic claims that Apple is abusing its position by charging a 30% commission on all application-based revenues as well as in-app purchases. And Epic said that this would lead to reduced revenues in 2020.

Apple says that this practice is justified because it invested billions of dollars into the App Store, which it then makes available to all third-party companies for free.

And here’s what really caught my eye – Epic Games had to reveal how much money it is making. That’s the benefit of the hearing. It enables us to get an inside view of the financials of a private company like Epic. This provides insight into the scale and growth of the gaming industry.

And the numbers are impressive.

Epic Games generated $9 billion in revenues between 2018 and 2019 from Fortnite. And it made a total profit of $5.5 billion.

Wow! That makes Fortnite one of the most profitable games in history.

This level of success probably hurts Epic’s case, though. The company originally said in the filing that it expected revenues to trend down in 2020 because of Apple’s onerous commissions.

The final numbers are in, however… and Epic Games did $5.1 billion in revenue in 2020. It was a record year. That probably won’t go over well in court.

The good news is that Epic Games is clearly not hurting.

If we remember, Epic completed a $1 billion VC round last month. That valued the company at $28.7 billion, making it one of the most valuable private companies in the world.

Now we know why. With $5.1 billion in annual revenues and huge profits, Epic Games is currently valued just over five times sales. This is a company that could easily hit a $50 billion valuation in a follow-on VC round.

And the last interesting tidbit from the case came out of the latest filings. They revealed that China’s internet giant Tencent owns a 40% stake in Epic Games. That’s raising security concerns.

Just like Google and Facebook, Chinese internet companies are notorious for their data surveillance practices. And China doesn’t have the same laws in place to protect consumers, especially minors under the age of 18. This has prompted some to call for Tencent to sell its stake.

But not surprisingly, Tencent doesn’t want to sell. Epic Games is a cash cow that’s undervalued as it is.

So this story has certainly been as interesting as the headlines promised. And with the scale of Epic’s business that we now well understand, an IPO may not be too far off.

P.S. Tonight, our friend and colleague Teeka Tiwari is hosting an event that anyone interested in cryptocurrencies will likely find interesting, especially those watching the extraordinary growth that has taken place in this space over the last year.

Teeka believes he’s found what could be the biggest opportunity yet. And he’s going to share how attendees can access six new explosive crypto investments he’s never previously discussed.

If you’d like to learn about the new opportunity Teeka believes he’s spotted, go right here to reserve your spot for the “Super Halving” Summit at 8 p.m. tonight.