I’m happy to say that the events of this weekend didn’t result in any kind of disaster. The uncontrolled descent of China’s booster back to Earth resulted in debris being scattered in the Indian Ocean to the west of the Maldives yesterday. 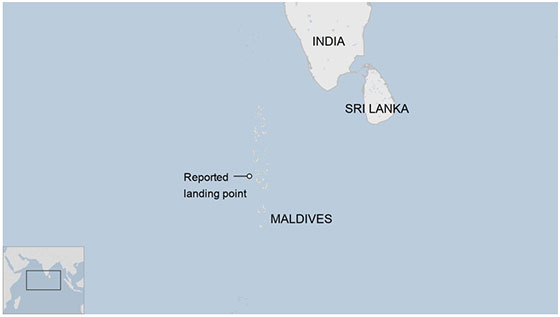 As an island nation with a population of about 530,000 and a limited land mass footprint, the country certainly had the odds in its favor.

But from the perspective of an uncontrolled reentry from space, this was a very close call. The reality is that an entry timing of just a few minutes’ difference than what occurred could have resulted in debris hitting the capital of the Maldives, Malé.

With the crisis fortunately averted – purely based on luck – the success that SpaceX just enjoyed stands in stark contrast.

Just a few days ago, SpaceX launched its Starship SN15 to an altitude of 10 kilometers, reoriented itself for a controlled descent (the “bellyflop” maneuver), flipped to a vertical position to prepare for landing, and nailed the landing precisely where it wanted to. It looked as easy as a walk in the park.

You can see the spectacular landing below:

As a reminder, the Starship is a massive, 150-foot tall chunk of steel that looks roughly like a corn silo. It’s pretty awesome to see it launch from Earth to an altitude of 10 kilometers and stick the landing, if you ask me.

Here’s the incredible part, though.

This was only SpaceX’s fifth high-altitude launch. Journalists had a field day with SpaceX over the previous four attempts, in which the landings resulted in explosions. They completely missed the context of what SpaceX was doing.

The team wasn’t expecting to get it perfect on the first or second try. It was testing out systems, collecting data, improving performance, iterating, and optimizing its tech.

The team at SpaceX got it right on its fifth try. Better yet, the first high-altitude launch occurred on December 9 last year. That’s five launches in just under five months, resulting in a perfect test flight. Wow.

The Starship will be placed on top of a super heavy rocket booster that will provide enough thrust to get the Starship into orbit. The launch vehicle will be able to get more than 100 metric tons into Earth’s orbit, making it the most powerful launch vehicle in history.

Then it’s off to the moon!

Cryptocurrency miners are flocking to a new market…

There has been an absolute surge in demand in the solid-state drive (SSD) market that caught my eye.

SSDs have now become mainstream in laptops, desktops, and even in data centers because of the performance improvements compared to hard disk drives (HDDs). What sets them apart from legacy hard drives is that they don’t require moving parts. That’s where the name comes from.

When it comes to the SSD market, most are sold directly to manufacturers who place them in the computers, laptops, tablets, and mobile phones that consumers buy right off the shelf.

The SSDs not purchased by manufacturers are then sold in the “spot market.” This is where you and I can purchase an SSD from an online marketplace. Typically, the spot market accounts for roughly 10–12% of SSD supply. There just aren’t that many sold directly to consumers.

Until now… Recently, cryptocurrency miners have begun buying up all available large-format SSDs. Demand is so high it’s causing a supply shock.

But here’s the thing – SSDs are memory devices. They don’t provide the computer power needed for cryptocurrency mining. That’s why most cryptocurrency miners rely on reconfigured graphics processing units (GPUs).

So what’s going on here? Why are cryptocurrency miners cleaning out the stock of SSDs?

Well, it turns out a smart contract blockchain project called Chia Network is directly responsible for this surge in demand.

Chia is a cryptocurrency project founded in 2017 by Bram Cohen. He is the inventor of BitTorrent – a Napster-like, peer-to-peer file sharing protocol.

Many cryptocurrencies like bitcoin use what’s called a Proof-of-Work consensus mechanism. This is a mining model that requires incredible amounts of computing power – not storage. The miners with the most computing power and bleeding-edge semiconductors are at a great advantage.

In contrast, Chia’s PoST mining model is based on memory/storage. The miners with the most memory have the advantage. That’s why miners are cornering the SSD market.

Just how much memory is being bought up? Let’s have a look: 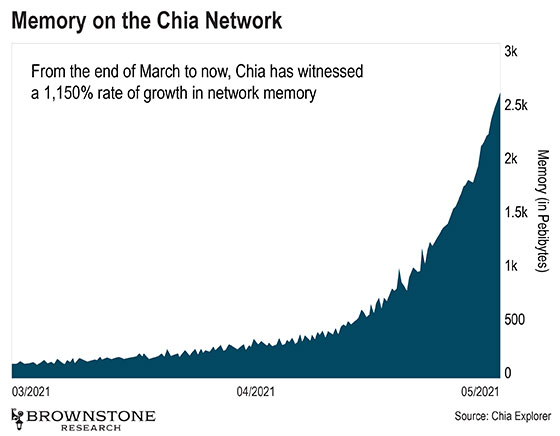 As we can see, the Chia network had less than 200 pebibytes (PiB) of memory prior to April. As of last week, that number had shot up to more than 2,500 PiB. And by the time we go to press, this figure might be north of 3,000.

For perspective, one pebibyte is equal to over 1.1 quadrillion bytes. This is an incredible amount of memory.

Think about this – a 7.68 terabyte (TB) SSD costs about $900 on Amazon. If we assume Chia’s 2,500 PiB of memory was composed entirely of this same SSD model, the network would be made up of $330 million worth of SSDs.

From the hardware alone, we can see the Chia network is already valuable. And the fact that miners are spending so much on SSDs shows us how hot this project is right now.

That makes this a project we need to keep an eye on. And Chia’s native token just began trading under the ticker XCH. It has the potential to be a great investment for speculative investors.

Lyft is no longer bleeding cash…

Ride-hailing company Lyft is taking a page out of Uber’s strategy book. It is now selling off its self-driving division.

Regular readers might remember when Uber “sold” its self-driving unit called Advanced Technologies Group (ATG) to early stage company Aurora. We talked about that back in December of last year.

The headlines said that Uber sold ATG for $400 million. But in reality, Uber paid Aurora to take it off its hands. Anyone looking at the deal structure could see that.

Uber was willing to do this because it lost more than $100 million due to the self-driving unit over 12 months. Uber just needed to get it off the books.

And that’s exactly why Lyft just followed suit. The only difference is Lyft truly sold its self-driving division. Toyota paid $200 million up-front for it. And the legacy carmaker agreed to pay an additional $350 million over the next five years. That makes the deal worth $550 million.

This is a great move on Lyft’s part.

What’s more, the sale will free up $100 million in annual net operating costs. This puts Lyft on the path to becoming a profitable operation.

In fact, Lyft is expected to post a third-quarter profit on an adjusted basis if it continues at its current pace.

A move like this makes a lot of sense. That’s because creating artificial intelligence (AI) software for autonomous driving vehicles requires a lot of capital. And for Lyft, its core competency is not self-driving technology. If anything, that served as a distraction.

Lyft’s value is tied to matching up riders with drivers. It’s a marketplace.

And with self-driving cars, Lyft will look to offer services such as routing, consumer relations, and servicing fleets. Lyft already has existing relationships with companies like Aptiv that it can leverage as well.

There is nothing that prohibits it from partnering up in the future for autonomous technology. In the meantime, it can become strong financially.

So Lyft is making a good decision here by narrowing its focus. We can expect the company to make great progress on its free cash flow over the coming year.

The U.S. is clearing the way for innovation…

We’ll end the day by looking at how the United States is fostering a competitive environment for autonomous vehicles and self-driving technology.

This is a topic we frequently touch on here at Brownstone Research. It’s a trend that’s moving much faster than the average person realizes. And that dynamic brings with it an excellent investment opportunity.

As we have discussed before, there are different levels of self-driving technology. The goal is fully autonomous vehicles where humans don’t need to do a thing. The car drives itself 100% of the time. That’s referred to as Level 5. Once we get to Level 5, transportation will be changed forever.

And new legislation in the United States Congress signals that Level 5 is coming much faster than most people expect.

This legislation would grant the National Highway Traffic Safety Administration (NHTSA) the power to exempt 15,000 self-driving cars per manufacturer from the safety standards written for human drivers. It is rewriting the books to pave the way for Level 5 self-driving cars.

And the new law says that manufacturers can come back in four years to ask the NHTSA to expand its exemption beyond 80,000 cars.

This is progressive legislation. It removes the requirement that says all cars must have a steering wheel, sideview mirrors, floor pedals, and other features that human drivers use every day.

That’s right – we are going to start seeing cars that don’t look like cars anymore. That’s going to take some getting used to.

And the fact that it will be impossible for a human driver to take the wheel and override the self-driving technology in these cars will be scary at first. But there will always be voice controls and a touch screen interface to deal with an unusual situation or a change of directions.

And whether we like it or not, this is the direction the technology is headed.

That means nearly the entire country is already covered. Here’s the map:

This is a big development. It means innovation, testing, and improvements can take place on our nation’s roads at scale. It’s all about being competitive in the autonomous vehicle space at the national level.

And it’s just more proof that self-driving cars are becoming a reality. They are much closer than most people realize.

If you want to follow along, be sure to check out my Near Future Report investment service, where we take positions in these companies before they cash in on this mega trend.

P.S. As we mentioned in our first story today, cryptocurrencies like bitcoin are experiencing incredible growth… And that’s creating an exciting opportunity for investors who are interested in this space.

This Wednesday, May 12, our friend and colleague Teeka Tiwari is hosting a special event called the “Super Halving” Summit to talk about what he sees coming. Teeka is a crypto expert who’s helped his readers gain as much as 2,950%… 5,121%… 14,619%… and even 26,977% on his crypto recommendations.

And now he believes he’s found his biggest opportunity yet. If you’d like to learn more, you can go right here for the details.