It has been fascinating to watch the dynamics around vaccine administration.

The ramp-up in the U.S. was fast as vaccines had already been manufactured well in advance of the Food and Drug Administration’s (FDA) emergency use authorizations (EUAs) last year.

The pipeline was already full. It’s what enabled the U.S. to administer an extraordinary number of shots – 262 million doses and counting – since December.

But based on sheer numbers, only China has administered more doses than the U.S. at 324 million. That only represents about 11.6% of the population (most vaccines require two shots).

The at-risk part of the U.S. population was addressed very quickly following the EUA of both the Pfizer/BioNTech and Moderna vaccines. Things opened up to the broader population quickly thereafter.

As we can see in the chart below, the peak of vaccine administration happened on April 1.

And the seven-day moving average (the red line) rolled over around April 13. That’s the day that the Johnson & Johnson vaccine was placed on a 10-day pause due to vaccine-induced deaths caused by blood clotting.

Perhaps not surprisingly, J&J never quite recovered consumer confidence from the pause, even though the pause was lifted on April 23.

This dynamic may likely be the reason that the Department of Health and Human Services (HHS) and the Centers for Disease Control and Prevention (CDC) have been so tight-lipped about the severe side effects of the Pfizer/BioNTech and Moderna vaccines, which have been reported across the country in the CDC’s VAERS database.

Some readers have pointed out that VAERS is an imperfect database. It’s simply a collection of submissions on vaccine-related incidents.

But the database is predominantly used by health care professionals. For that reason, it’s our best resource for incidents not reported in the mainstream press or academic journals.

Understanding the risks, just as with the J&J vaccine, would certainly influence the personal choices of many as to whether or not taking a vaccine is something that they are willing to do for their own personal health.

And while some have suggested that the drop-off in people willing to receive the vaccine is due to people not being “educated” enough about vaccines, I believe that there is a much simpler explanation.

With 262 million doses already administered, most people who were at risk – and those who didn’t believe that they had been exposed yet to COVID-19 – have already had their shots.

Also, recent research indicates that 25–30% of the population has already been exposed to COVID-19 and thus can claim natural immunity. Many of these people know that they have developed natural immunity. Those people likely feel they don’t need to receive the vaccine.

It’s not “stupid” or “uneducated” to think that way at all. Research has been published demonstrating that natural immunity through exposure to COVID-19 has already persisted for more than one year. It is too early to say the same about the vaccines…

The remaining population that is willing to take a vaccine will dry up pretty quickly over the next few weeks.

And the approval yesterday from the FDA for the Pfizer/BioNTech vaccine to be used on 12 to 15 year olds may provide a small bump in the numbers… But it may not last long. After all, the common influenza is far more dangerous for kids than COVID-19.

But the best part of all of this? Summer is on. Summer camps will be free. And in most places, masks will be optional if not completely absent.

Here’s to having a great, normal summer!

This is a fairly new company that just raised an impressive $8 million in seed funding.

Here’s what the product looks like. It’s pretty cool: 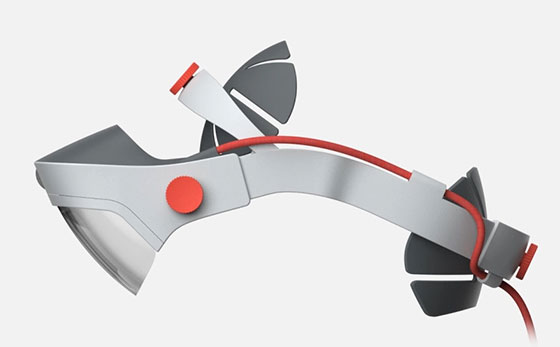 This certainly isn’t the big bulky headset that we are used to in this space. It’s a sleek, lightweight design.

And the headset is intended specifically for collaborative functions in an office setting. I love the clarity of the project.

To start with, the headset can switch between AR and VR modes. In VR mode, the lenses become opaque, darkening out the real world. The headset projects the immersive, 3D graphics one would expect.

And in AR mode, the lens technology becomes transparent so that the user can also see their surroundings.

What’s more, the headset works in tandem with an entire system. Check this out: 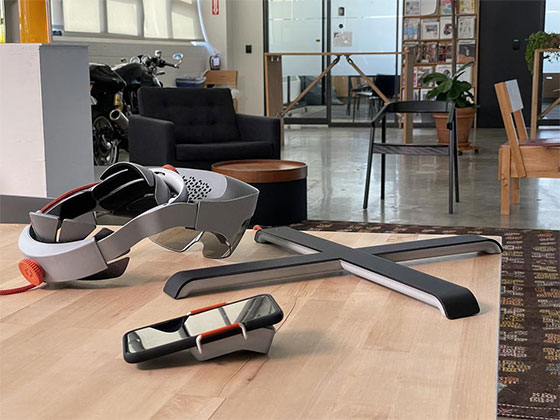 Here, we can see the headset alongside two other devices.

The black, X-shaped device is a holographic projector. It works in concert with the headset to position three-dimensional images in a field of view above the device.

And the device in the foreground is a control pad that connects to a smartphone. This allows the user to manipulate the 3D hologram at will.

This is a pragmatic system that’s perfect for industrial design, product development, and holographic art and graphic creations. And multiple people can work on the same hologram together. That’s where the collaborative element comes into play.

So this is a comprehensive vision for AR/VR from an exciting new company that only just completed its seed round last month. We might ask… How is the company this far along if it’s just getting started?

Meta raised $75 million in venture capital and developed some great augmented reality technology. But it was too early. The company ran out of money in 2018 and couldn’t attract any new investors. Meta’s intellectual property assets were sold to a bank as part of the bankruptcy process.

Well, Campfire now has access to those assets. It is simply building on all the great work Meta did.

It essentially got a head start. Now Campfire is able to leverage both the existing technology from Meta and take advantage of the bleeding-edge lens and semiconductor technology that exists today.

I’m excited to see what Campfire does with its promising product. This could be the AR/VR platform that cracks the market for product design and creation.

The largest aircraft in history just had its second test flight…

Early stage company Stratolaunch just announced that the Roc aircraft successfully completed its second test flight. This comes three years after the Roc’s maiden flight in April 2018. This is a very neat story.

The Roc happens to be the largest aircraft in history. The original design and inspiration came from Howard Hughes’ “Spruce Goose,” which caught the attention of the late Microsoft cofounder Paul Allen.
Allen helped get Stratolaunch off the ground. But unfortunately, he didn’t live long enough to see these first test flights. That said, he would not be disappointed. Have a look:

This thing is insane. It is like two 747s combined into one aircraft. The Roc’s total wingspan is 385 feet.

To put this incredible speed in context, aircrafts flying at Mach 6 move nearly 6,752 feet – over a mile – per second. It’s hard to wrap our heads around how fast that is.

These hypersonic vehicles can perform a variety of military and defense functions. And there’s very little risk of them being shot down because they move so fast. Modern anti-aircraft systems are not designed to combat Mach 6 speeds.

And beyond the military applications, these vehicles will serve as a test bed for hypersonic air travel. They are potentially a precursor to future hypersonic flights for the consumer markets.

That makes Stratolaunch another exciting company to watch. This company is seeding the future of transportation right before our eyes.

Anyone interested in a hypersonic flight? That would be about an 80-minute flight from San Francisco to Tokyo. Not bad.

Volkswagen just announced a pretty bold move in the autonomous driving realm. Volkswagen (VW) Group, which includes iconic brands Audi and Porsche, is taking a page out of Tesla’s playbook.

VW just announced that it plans to design its own artificial intelligence (AI) chips and software for self-driving cars. This is a big undertaking with a long-term focus. And it is something of a surprising move.

The industry assumed VW would use Argo’s tech for its passenger cars as well. However, this announcement suggests that’s not the case. VW wants to develop everything in-house, just like Tesla.

To put this in perspective, VW is roughly a decade behind here. Tesla has been iterating and optimizing its AI hardware and software for over 10 years now.

So what’s VW thinking here? Why not partner with early stage companies like Argo AI, which already has working software models?

Well, VW has decided to play the long game. The company must realize that this is the only way it can eventually be cost-competitive with Tesla.

I don’t think the market realizes this yet, but Tesla has a massive advantage over every other company in this space. That’s thanks to its full stack approach to technology.

Tesla poured billions into research and development up front, choosing to sacrifice profitability for innovation. The company took a lot of heat for its unattractive financials for years.

But now Tesla owns all the intellectual property around both its hardware and software. It doesn’t have to pay licensing fees to use another company’s technology.

It has tech that no one else has in the industry. And that allows Tesla to keep its prices lower than all of its competitors and have a competitive advantage. Its cost basis in the industry is unmatched. (To learn how to profit from Tesla’s secret supplier, go right here for the details.)

So VW must know that it can never compete with Tesla on price without developing its own technology stack. The company is choosing to forgo immediate results to be a major player eight to 10 years into the future.

I certainly respect VW’s long-term focus here. I hope the company sticks to it. That’s not an easy decision to make. And it will change the dynamics of the industry about a decade down the road.

VW could become a major player in time if it doesn’t lose its fortitude.

There’s certainly a chance VW gets started and realizes that doing everything in-house is too daunting of a task. Or it might have shareholders who become impatient with the lack of progress.

There will always be naysayers just as there were with Tesla. That would be a major opportunity for an early stage company like Argo AI to grow its market share.

And if VW is successful, the company may become interesting for the right reasons – rather than its emissions scandals and bad April Fools’ jokes. Time will tell.