Finally, it has been published.

The Danish study on the effectiveness of masks – or lack thereof – in protecting us from COVID-19 was just published yesterday in the Annals of Internal Medicine.

The study has been around since June, but no medical journals were willing to publish it. Now we can understand why.

Before I share the results, it’s worth noting that this is the most comprehensive study on masks and COVID-19 that exists. This was a tightly run trial that was incredibly well-balanced. It is the best scientific study available on this subject.

There were 4,862 participants selected for the trial who were very carefully balanced among a wide range of characteristics that we can see below.

Characteristics of Participants Completing the Study 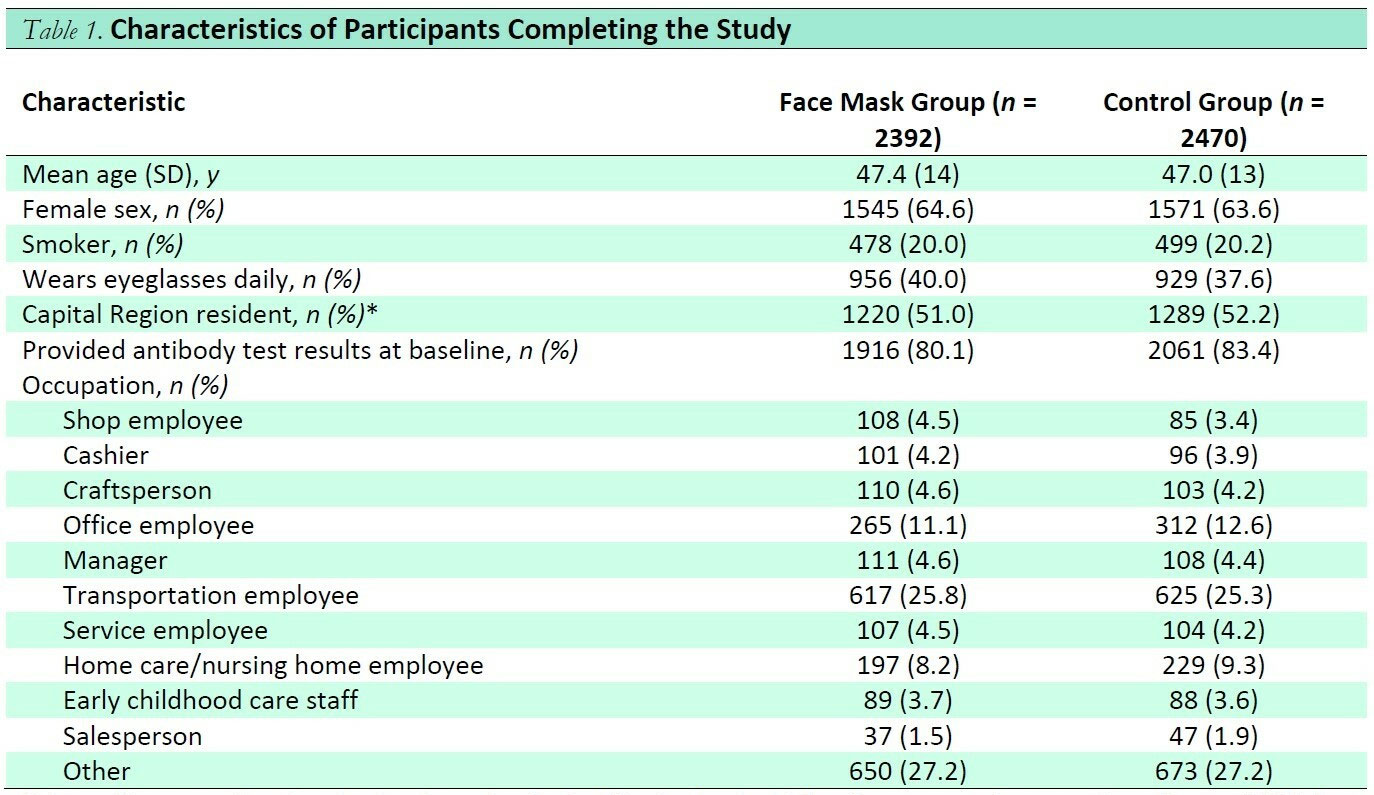 The participants in the face mask group were all given high-quality surgical masks with a filtration rate of 98%. Worth noting is that this quality of mask is even better than the N95 masks that some use today, and it is many times better than the cloth masks that we are told to wear “for our own safety.”

The members of the control group did not wear masks.

What were the results?

I’d be willing to bet if the face masks the study used were cloth masks, the face mask group’s infection rate would have been much higher. Scientific research shows that particles from an airborne virus get trapped in a cloth mask, which is porous and prolongs the wearer’s exposure to the virus.

But here is the conclusion of the Danish study in the authors’ words:

Our results suggest that the recommendation to wear a surgical mask when outside the home among others did not reduce, at conventional levels of statistical significance, the incidence of SARS-CoV-2 infection in mask wearers in a setting where social distancing and other public health measures were in effect…

I’ll put this a simpler way: Masks don’t protect the wearer from COVID-19.

And now we know definitively that is the “science.”

American roads are getting ready for electric vehicles…

And this feat is all thanks to Volkswagen’s (VW) big scandal back in 2015. I’m sure many readers remember that one.

VW perpetrated one of the largest frauds in the auto industry by falsifying emissions data. The company installed a device that made it look like its cars passed emissions standards when they really did not. This went on for at least seven years.

In the end, VW admitted that at least 11 million cars worldwide had been fitted with this device to make it look like their emissions were within the allowable threshold.

Once this was discovered, VW was hit with a $2.8 billion criminal penalty in the United States. It was the largest fine on an automaker in history.

And as part of its negotiations with the U.S. government over this massive fine, VW agreed to promote electric vehicle use for at least the next 10 years.

Thus, Electrify America was born. The company was created by Volkswagen. And it remains a subsidiary of VW to this day.

Electrify America started building fast-charging stations for EVs across the U.S. in 2018. The fact that it has already completed 500 stations is remarkable. That’s fantastic progress in a relatively short period of time.

And this is all part of the push to get American roads ready for EVs.

Just like we needed gas stations spread throughout each city before traditional cars caught on, we will need many convenient and easily accessible fast-charging stations before EVs make sense to the mainstream consumer.

A few charging stations here or there won’t do the trick. We’ll need multiple charging stations in every city across the country for EVs to become mainstream. And that’s why there’s plenty of room for competition here.

So Electrify America has quickly situated itself among the companies racing to build out EV infrastructure.

And we should note that this isn’t purely an altruistic endeavor. EV drivers pay fees to “fill up” at these charging stations, just like we pay to fill our traditional cars up with gas. Electricity isn’t free.

And that brings us to another point – EVs don’t really run on “clean” energy right now. That’s a misconception.

So EVs won’t truly be “clean” until the electricity used for fuel is produced 100% by clean energy methods.

Walmart is testing out self-driving technology…

Walmart just announced a partnership with Cruise. We have talked about this company several times in these pages.

To bring newer readers up to speed, Cruise is General Motors’ (GM) self-driving division. GM acquired Cruise for $581 million back in 2016. But GM didn’t retain 100% ownership of the early stage company.

Instead, GM allowed several other companies – including Honda and SoftBank – to invest in Cruise. GM did this to spread the risk out, largely because its own financial position was not strong.

We may ask – what in the world does Walmart want with Cruise?

Well, Walmart has its eye set on a self-driving delivery service. It’s all part of Walmart’s effort to keep pace with Amazon. I must tip my cap to the retail giant. It is certainly taking its competition with Amazon seriously.

In fact, Walmart has now partnered with six different self-driving companies to see who has the best technology.

The pilot program with Cruise will take place in Scottsdale, Arizona. Customers will be able to order from their local Walmart and have their goods delivered via one of Cruise’s self-driving cars. The cars will operate autonomously, but they will have a safety driver in the front seat for the time being.

The key, of course, is to get to the point where the safety driver is no longer necessary. That’s because the driver is the most expensive part of the delivery service.

It will quickly become a competitive disadvantage if a retailer doesn’t use autonomous delivery technology.

And that’s why Walmart is running pilots with so many different companies. It is desperate to beat Amazon to autonomous delivery in hopes of catching up to the web retail giant’s expanding market share.

Speaking of self-driving technology, Honda just announced that it is the first carmaker to receive regulatory approval to sell Level 3 self-driving cars in Japan.

Level 3 refers to self-driving cars that can operate 100% autonomously on the highway. The cars still require a driver to help navigate when they are in the city or on backroads. But once a Level 3 car hits the highway, it can take over completely. The driver doesn’t need to pay attention at all.

Of course, Tesla owners with AutoPilot would chuckle at this announcement.

Tesla has enabled Level 3 self-driving for years. The nuance here is that Tesla hasn’t received regulatory approvals allowing drivers to not pay attention when the car is in Level 3 mode yet. But that’s not the goal for Tesla, which is working aggressively toward full Level 5 autonomy within the next 12 months.

This is a big move for Japan. The country is typically more conservative when it comes to safety regulations.

With Japan’s regulatory body giving Honda the green light for Level 3, we can be sure that the technology is solid.

So this is a sign of things to come. Even having Level 3 approved and in common use on highways would dramatically improve the safety of the roads and reduce accidents.

This tells us that 2021 will be a huge year for the self-driving industry.