The flood of post-election good news continues to roll in.

Last night, the Food and Drug Administration (FDA) announced that it approved the first at-home rapid COVID-19 test for emergency use authorization (EUA).

The company behind the test is Lucira Health, a small private company out of Emeryville, California. The test is approved for use by those 14 years and older to detect the presence of SARS-CoV2.

Samples are taken from nasal swabs and then stirred into a sample vial with chemicals. The vial is then connected to a small battery-powered test unit that produces the results in about 30 minutes or less.

What the headlines today won’t say is that this kit doesn’t inform us whether we are sick with COVID-19 or are infectious. Just like polymerase chain reaction (PCR) tests, this at-home test can only detect the presence of SARS-CoV2 in our system… even if the SARS-CoV2 is five months old and noninfectious.

The company states that its test detects the virus in patients who tested positive from a PCR test with 94% accuracy. But the ironic part is that the PCR tests produce such high numbers of false positives (60–90%) that they are not useful for diagnostics.

So the same is true of Lucira’s at-home test. About the only thing that it can tell us accurately is that we do not currently have and never had SARS-CoV2 in our system. In other words, there won’t be too many false negatives.

The result, of course, will be even more people who are not sick and not infectious being forced to quarantine for two weeks for no reason at all.

But at least they’ll be able to say, “I took the test.” This silliness has become much more of a compliance and liability issue… nothing at all to do with public health and safety.

Also not mentioned in the headlines is that Lucira Health received two grants from the U.S. government in 2017, which were vital to keeping the company alive. The company received more than $4 million of critical funding from the National Institutes of Health (NIH) and the Department of Health and Human Services (HHS).

And to make for an even more exciting day, Pfizer and BioNTech announced that they wrapped up the final analysis of their joint Phase 3 trial.

Not to be outdone by Moderna’s earlier announcement that it is 94.5% effective, Pfizer delivered even better results, announcing that its vaccine is actually 95% effective. This comes on the back of the interim results announced five days after the election showing 90% effectiveness.

It just keeps getting better.

The Crew-1 Dragon spacecraft has arrived…

SpaceX just had another major victory.

Its Crew-1 mission carried four astronauts to space on yet another flawless mission. 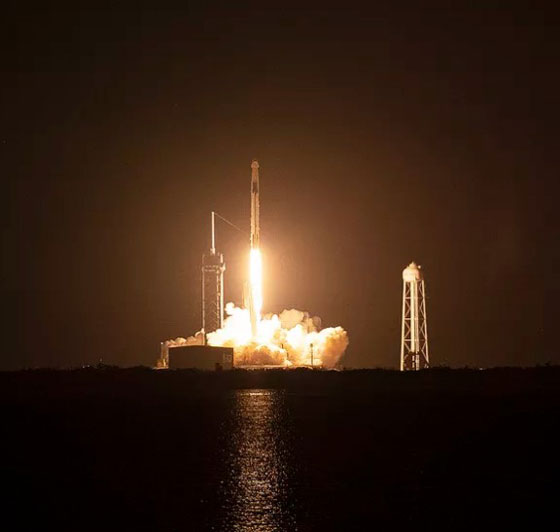 The Crew-1 module is now safely docked at the International Space Station (ISS). It will be up there for about six months.

This was the follow-on mission to the demonstration flight last month that carried two astronauts up to the ISS and back down again.

And with this operational success, the floodgates have opened. SpaceX and NASA are jointly planning to launch seven Crew Dragon missions over the next 18 months.

The U.S. space program has not been this busy in a long time. I love it.

These will be both manned and cargo missions to the ISS. In fact, the first cargo mission is set to launch next month. That means there will be two Crew Dragon capsules docked at the ISS at the same time.

What’s remarkable here is how quickly SpaceX has gone from a concept to operational success.

I think back to 2014. That’s when NASA commissioned both Boeing and SpaceX to build a launch system to get U.S. astronauts up to the ISS.

Boeing’s contract was for $4.3 billion. Yet NASA only awarded SpaceX $2.5 billion. It was a display of clear favoritism to the legacy incumbent.

Despite this, SpaceX came out on top. It’s set to launch one mission after another in the months and years to come.

Boeing, on the other hand, is “hopeful” that its launch system will go online late in 2021. But it’s not sure yet. After all, who needs hope when you’re right?

It’s no secret that Boeing has been having problems with its software. Its last mission to the ISS was a failure, and the capsule had to be returned due to software glitches.

Of course, that’s exactly where SpaceX excels. SpaceX, like Tesla, focused on building a terrific software platform, and it built the hardware around it.

Boeing’s development process is old school. It is not using the same software and systems techniques like SpaceX. We can think of SpaceX as a modern, digital-first aerospace company that just happens to “sell” spacecraft.

Because of Boeing’s slow, expensive, inefficient, and ineffective approach, it is now several years behind. As a result, SpaceX now has a pseudo-monopoly with NASA as the pace of new missions is set to pick up.

SpaceX is to the aerospace industry what Tesla is to the electric vehicle and autonomous driving industries.

Amazon just launched Amazon Pharmacy. This is a delivery service that will bring prescription medicine right to our homes.

Of course, this isn’t a surprise to readers of The Bleeding Edge. We first talked about Amazon’s ambitions to get into prescription drug delivery over a year ago when we discussed Amazon’s acquisition of PillPack for $753 million.

The launch took a little while. I suspect that was because it takes quite a bit of time to get the approvals in place with each state for home delivery of pharmaceuticals.

We have been talking about great post-pandemic offerings recently in these pages, and here’s another one.

Prescription medicines are a big need for the at-risk population for COVID-19. These are senior citizens and people with underlying health conditions. And many people in this at-risk population – and even some of us who aren’t – don’t want to stand in line at a pharmacy right now with COVID-19 cases still popping up.

Well, here’s the perfect solution. Amazon will deliver our medicine right to our door. And it is even tying in with the Amazon Prime service to ensure fast delivery.

What’s more, Amazon is making it easy for customers to compare the prices of their medicines in several ways. Customers can see what their meds would cost if they paid cash rather than using their health insurance. And they can see what a generic drug costs relative to a brand name.

I love that Amazon is bringing price transparency to prescription medicine. This is something that will inform better decision making.

It is clear to me that Amazon is going to capture a large chunk of the prescription medicine market share with this new offering. In a sense, Amazon is becoming like a utility during this pandemic, helping people get all of their daily needs delivered right to their door.

And this is just the start of Amazon’s push into health care.

The company has also launched a telehealth service for its employees in Seattle. It’s called Amazon Care.

Amazon Care will essentially replace trips to the doctor’s office for employees. Instead, employees can chat with a clinician in minutes whenever they have a health issue. A smartphone app will facilitate both text and video chat when it is important to show the clinician something.

From there, Amazon Care will dispatch a mobile care agent to employees’ homes or offices to conduct in-person exams, testing, or treatment. How’s that for convenient?

I believe this is a test run that will lead to yet another public service offering. Amazon will test its telehealth model with its employees, optimize it, and then roll out a country-wide telehealth service.

At that point, we can have both our medications and our in-person exams and treatments brought right to our door. Who wouldn’t want that?

Some companies will be able to adapt to the new post-pandemic environment… and some tech companies won’t.

But the businesses powering these trends will be some of the best investments in the years ahead. I recently put together a presentation where I reveal the top stocks to own today. Go right here.

The next step for augmented and virtual reality…

New research out of Cornell University just caught my eye. A team there has developed an interesting pair of gloves for augmented reality (AR) and virtual reality (VR) using fiber-optic technology.

Of course, AR and VR offer visual experiences. Users put on eyewear or a headset to immerse themselves in an augmented or virtual world.

But this technology will actually empower us to interact with and “feel” these virtual experiences.

Fiber-optic cables allow light to run down over the gloves to the tips of the fingers. Here’s a visual: 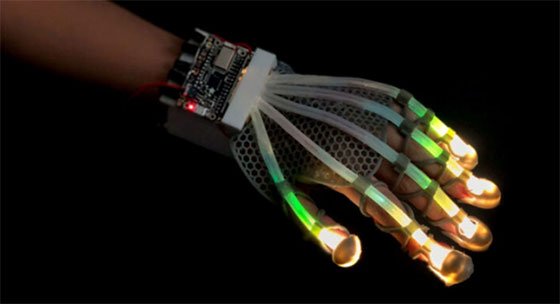 As the user moves his or her hands and fingers, the system can detect the degree to which the light is bent, and by doing so, it can accurately determine the movement and position of fingers. And that movement is synchronized with the AR or VR application.

In other words, these gloves allow players to use their hands in their AR and VR applications. This could consist of waving and making hand gestures at other players. It could be picking up and throwing objects. It could be climbing a mountain or rowing a boat or writing a letter. Any action we perform with our hands could be simulated in AR and VR.

That information could then be coupled with haptic technology, which can simulate feeling in the gloves. Haptics can exert pressure to mimic grip or resistance in the hand. That would make for an incredibly immersive, lifelike experience. It adds another dimension of interactivity to the experience.

We’re going to see a rapid increase in this kind of technology, as the AR/VR industry is now on an accelerated growth trajectory due to the pandemic.

We have talked at length about how this will be the gaming industry’s biggest year ever.

There is so much demand for gaming consoles right now that companies can’t make them fast enough. The Xbox Series X and PlayStation 5 units are essentially sold out through the end of the year. If we order one, it won’t arrive until the new year.

And there are already several great virtual reality headsets on the market today. And one or two major tech companies will launch their AR glasses next year. That will be the catalyst that drives the rapid adoption of both AR and VR technology.