My comments yesterday about how I suspected we’d receive a lot of good news regarding COVID-19 now that the election is behind us couldn’t have been more timely.

Literally hours after my “ink” dried, suddenly the Food and Drug Administration (FDA) announced that it had authorized Eli Lilly’s monoclonal antibody therapy for COVID-19 for emergency use authorization (EUA).

Its antibody therapy – bamlanivimab – is not only fun to say… it is also approved for treatment of both adult and pediatric patients who are 12 years or older. In clinical trials, bamlanivimab was shown to reduce COVID-19-related hospitalizations in patients that are in high-risk categories.

Is this good news?

Well, of course it is. The more therapeutic tools we have to address different patient populations affected by COVID-19, the better.

But why now? Why six days after the election?

It didn’t take much digging to figure out the following:

In short, the FDA clearly gave the nod to the U.S. government on the initial $375 million deal, as it had already decided to approve bamlanivimab for EUA.

But it chose not to announce the decision until six days after the election.

Why do I care so much?

Because these highly politicized decisions to delay therapies, vaccines, and vital research relevant to COVID-19 are resulting in unnecessary deaths. These deaths could have been avoided if vaccines or therapies had been made available.

The FDA has embarrassed itself throughout the pandemic. The head of the FDA misrepresented data related to convalescent plasma as a therapy for COVID-19 in August.

The agency insisted that it would put its trust in “data and science,” yet it steadfastly stood against hydroxychloroquine or chloroquine as a viable therapeutic approach to fend off COVID-19… even though there are 136 scientific studies that demonstrate that hydroxychloroquine is effective against COVID-19 when used early.

What’s the point of using taxpayer dollars to fund government agencies, corporations, or academic institutions for scientific research if these organizations are only going to withhold, suppress, or misrepresent critical information for the purpose of political gain?

Results and approvals need to be published as soon as possible, in full transparency, so that we can make the best possible decisions with the data that we have available at any given time.

Readers may remember the “darknet” marketplace called the Silk Road. It was a market that existed in a hidden part of the internet that was only accessible through special web browsers.

And one of its favorite currencies was bitcoin.

The Silk Road was built by computer scientist Ross Ulbricht when he was in his twenties. He originally envisioned a free market where commerce could be conducted without the intervention of the heavy hand of the government.

But it fast became one of the largest illicit drug markets in the world.

Ulbricht was arrested in October 2013 and held without bail. In May 2015, he was sentenced to double life imprisonment plus 40 years in jail for creating the Silk Road. That’s despite the fact that Ulbricht himself wasn’t selling drugs on the site. He was absolutely guilty, but the sentence was extreme compared to the crime.

Ulbricht’s now been in jail for seven years. But the Internal Revenue Service (IRS) never dropped the case. It’s been eyeballing a bitcoin wallet associated with the Silk Road worth more than $1 billion at today’s market price.

Through blockchain analytics, we could see that these bitcoins had not moved since 2013. Everyone paying attention wondered – who has access to that wallet?

Somehow, the IRS Criminal Investigation unit tracked down the answer. It found an unnamed hacker referred to now as “Individual X” who had managed to gain access to the wallet.

We don’t know the details of what went down, but we know the IRS has seized the bitcoins.

For a few hours, the cryptocurrency industry was on edge. It knew that the $1 billion worth of bitcoin was being moved. Some believed that the wallet had been hacked and someone had gained access.

But it turned out to be the IRS moving the coins. In short, it just got a $1 billion windfall.

The IRS will likely auction off these bitcoins. And given we’re talking about $1 billion worth, it’s almost certainly going to large institutional buyers. That’s led some to speculate that this will impact the price of bitcoin.

But that won’t be the case. Since bitcoin’s total money supply is not changing, the IRS auction should not affect the price. All of those bitcoins were, and still are, in circulation.

However, this is a great reminder that the IRS and law enforcement agencies are serious about tracking down any illicit transactions or tax evasion involving cryptocurrency.

Most blockchain technology is built around a public ledger that allows anyone to see the history of every coin and each digital wallet address. We might not immediately know who owns an address, but eventually the connection can be made.

As a reminder to my U.S.-based subscribers, capital gains of any kind must be reported as a taxable transaction.

This even applies when one digital asset is sold for another. If the value of the first digital asset has increased with respect to the U.S. dollar since it was bought, it is treated like a capital gain.

In its earnings release last quarter, Nintendo announced that it expected to sell 19 million Switch gaming consoles this fiscal year. That would have been a stellar year.

However, Nintendo’s forecast was way off.

The company just shocked the market by announcing that it is on track to sell a whopping 24 million consoles this fiscal year. Nintendo’s forecast from just a single quarter ago was more than 20% too low.

We don’t see this very often.

For context, Nintendo’s fiscal year runs from April 1 through March 31. That’s common for most Japanese companies. So Nintendo still has over four months to hit its forecast.

This is another great example of how COVID-19 has been a major catalyst for certain technology companies.

I remember back in April, you couldn’t find a Nintendo Switch anywhere. They were all sold out. Nintendo couldn’t make them fast enough to keep up with the demand of people looking for entertainment for their kids while stuck at home.

And that gives us the context for Nintendo’s updated forecast.

We can expect to see high levels of COVID-19 cases as we move into the winter months in the northern hemisphere. The cold, dry weather is conducive to the spread of the virus.

The headlines will sensationalize this rise in cases, and that will cause people to stay home more than they otherwise would. And, of course, many schools will be closed and kids will be home and logging into remote learning.

And that means COVID-19 will continue to be a catalyst for the gaming industry for the next four months or so.

That’s perfect timing for the launch of Microsoft’s Xbox Series X and Sony’s PlayStation 5 (PS5) consoles. We can expect those launches to do exceptionally well. In fact, I’ve already been seeing indications that the entire production for the rest of the year is already spoken for.

Here is what I found on the Xbox website: 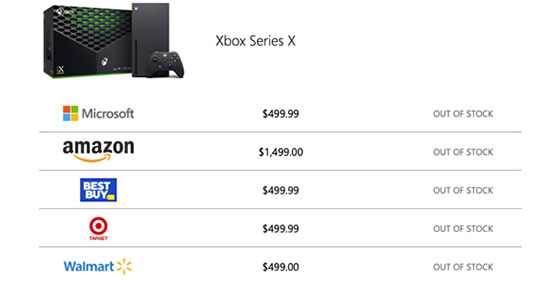 Some Xbox preorders may not even arrive until the end of December. That will result in some pretty disappointed kids… and probably some adults…

The same will be true for the Sony PlayStation 5.

As a result, this is going to be the gaming industry’s biggest year in history.

And that’s very bullish for the pick-and-shovel companies that supply the components going into these gaming consoles.

Advanced Micro Devices (AMD), for example, is providing next-generation graphics processors for both the Xbox Series X and the PS5. Record sales will be a huge win for AMD.

So we’ll continue keeping an eye on this trend going forward. As I’ve said before, we shouldn’t discount gaming as an investment…

While the world was distracted by the U.S. presidential election, JPMorgan quietly made a big move in the background.

It launched its own digital currency called the JPM Coin.

JPMorgan first announced that it was working on its own digital currency early last year. It was odd because prior to that JPMorgan CEO Jamie Dimon made very disparaging comments about bitcoin. He called it a fraud.

And he added this gem: “The currency isn’t going to work. You can’t have a business where people can invent a currency out of thin air and think that people who are buying it are really smart.”

That’s funny… because it seems that’s what JPMorgan just did.

JPM Coin’s blockchain is based on a customized version of the Ethereum blockchain. (If you’d like to find out more about my top blockchain recommendations, go right here.)

And JPMorgan created a new business unit called Onyx to manage the commercialization of the digital currency. Onyx will be staffed with more than 100 employees.

JPM Coin’s purpose is to make it easier to transmit wholesale payments across borders. JPMorgan claims that it can save about 75% of the total cost of these cross-border transactions. Sound familiar?

This is exactly what Ripple Labs has been doing for years with its XRP cryptocurrency. But as we talked about a few weeks ago, Ripple is getting a lot of pushback from U.S. regulators.

Clearly, JPM Coin was designed to compete with Ripple. JPMorgan is years behind, but it has lots of big institutional relationships that it can leverage in an effort to catch up.

However, the big question is – will JPM Coin also get pushback from the regulators? Is this too powerful of a position for one investment bank to be in?

I’d much rather have a firm like Ripple Labs remain independent and provide value to the world’s financial system than give even more control to JPMorgan or Goldman Sachs.

It reminds me of why I’d prefer Plaid to remain independent rather than allow the acquisition by VISA to move forward, as we discussed recently.

Allowing these massive incumbents to continue to extract extraordinary “rent” rather than enabling innovative companies who do things better, faster, and cheaper will result in the loss of the free markets.

We’ll be keeping a close eye on these kinds of developments.

Central bank-backed digital currencies – and currencies like JPM Coin and Ripple – are transforming cross-border payments for governments as well as multinational corporations and other institutions that need to move money around the worl.