It’s nearly impossible to keep up.

Yesterday, NVIDIA canceled its annual conference and is moving to livestreaming. Now Google and Microsoft are doing the same. Both are switching to virtual versions of their conferences. Facebook even canceled its own developers’ conference.

Square suspended its on-site, in-person job interviews and stopped all nonessential domestic and international business travel, as well as asking staff to not attend conferences.

And Twitter is encouraging its 4,800 staff to work from home. It is even mandating that staff in Hong Kong, Japan, and South Korea do not come to the office.

Yes, this is an overreaction. But it is also a catalyst for change.

After all, this will accelerate the adoption of virtual conferences, livestreaming, and even virtual reality and telepresence. And it will force remote collaboration on a daily basis. Yes, this happens today, but nowhere near the scale that was forecast back in the 1990s.

I’ve been asked recently about companies that will benefit most from this remote collaboration and video teleconferencing.

Well, two of my favorite companies on the back of this trend are Slack (WORK) and Zoom Video Communications (ZM). But I wouldn’t recommend these as investment opportunities… at least not right now.

I use both services daily. They are fantastic technology platforms, but they are ridiculously overvalued. Both companies went public recently, and I have yet to see either one trading at a reasonable valuation.

Slack trades at an enterprise value to sales (EV/sales) of 25. That means the current share price represents a company valuation that is 25 times the annual revenues (not profits).

And Zoom is even worse with an EV/sales of 57… I’m speechless. Anyone investing at these levels is guaranteed to lose their shorts over any reasonable period of time.

As for myself, I’ll be waiting for a big pullback on the back of an earnings announcement or a management screwup, when the market turns against them. That could provide a window to get my subscribers in at levels that will ensure profits.

Waymo is about to go live…

Big news on the autonomous vehicle front – Waymo just took in $2.25 billion from outside investors. The Canada Pension Plan, Mubadala Investment Company, Magna International, AutoNation, and Andreessen Horowitz were among those investing in Waymo. This is telling…

We have talked about Waymo before. As a reminder, it is Google’s autonomous vehicle division. I sat in one of the first self-driving Waymo cars back in 2011 on the NASA Ames campus – it was so early, Waymo as a division didn’t even exist at the time.

Back then, the vehicle was loaded with sensors and computing equipment. There was hardly any room to sit. There was a massive LIDAR “hockey puck” on the roof that helped the car identify its surroundings.

Waymo has come a long way since then. Waymo’s vehicles look just like regular cars now.

Waymo has been almost entirely funded by Google’s research and development arm. If it were a standalone company, Waymo would likely be worth tens of billions of dollars at this point. Google has complete control over one of the most valuable companies in the autonomous driving industry…

So why would it let in outside investors?

Journalists will have us believe that Google needs to share the annual costs of building Waymo. Staffing levels have boomed at Waymo, and it is estimated that the company is burning $1 billion a year now with no revenues.

Really? Do we really think Google needs the money? The company has $120 billion on its balance sheet. I’m certain it can afford the $1 billion burn.

And Google will generate $36 billion in free cash flow this year. That’s right – its cash position is growing at an incredible pace. It has so much money that it doesn’t know how to spend or invest… It has gotten to the point that it is irresponsible to not pay a dividend to its shareholders.

So why did it take money from outside investors?

The answer is simple.

It is buying influence as it gears up to commercialize the technology. Clearly, Google is just about ready to launch self-driving services using its Waymo cars. It’s not unusual for tech companies to seek out strategic partnerships like this just prior to launching a new product or service.

If we look at the list of investors – AutoNation is an American automotive retailer. Magna International is a Canadian automotive supplier. Mubadala is a prominent investment firm in the Middle East.

Partnerships with these companies tell us that Google wants to launch Waymo self-driving services in the U.S., Canada, and the Middle East. Google is making in-roads by allying itself with key players in its target markets.

And Google isn’t the only one with this playbook for outside investors.

In my 2020 prediction series, I said that we would see the first fully autonomous vehicle on the road this year. Well, with Waymo gearing up for launch, that prediction is looking more and more like a certainty.

So this move by Google signals that self-driving technology is close to real. We can expect to see the first Waymo cars zipping around our cities later this year.

The evolution of the gaming market…

As I mentioned last week, gaming may seem like a strange topic to discuss in an investment letter. But it’s a massive market. In the U.S. alone, gaming is an $18.4 billion industry. Globally, gaming is a $105 billion market.

And it continues to grow at a healthy double-digit rate every year. That makes the gaming industry larger than the entire motion picture industry, which is estimated to be about a $103 billion market.

For this reason, it’s important for us as investors to keep our finger on the pulse of the industry. And that brings us to today’s insight on the evolution of gaming…

I suspect many readers may not be familiar with a game called Roblox. It’s a kid’s online game that looks like a throwback from 20 years ago. It’s simple, and the graphics are not at all lifelike. They are blocky and cartoonish. 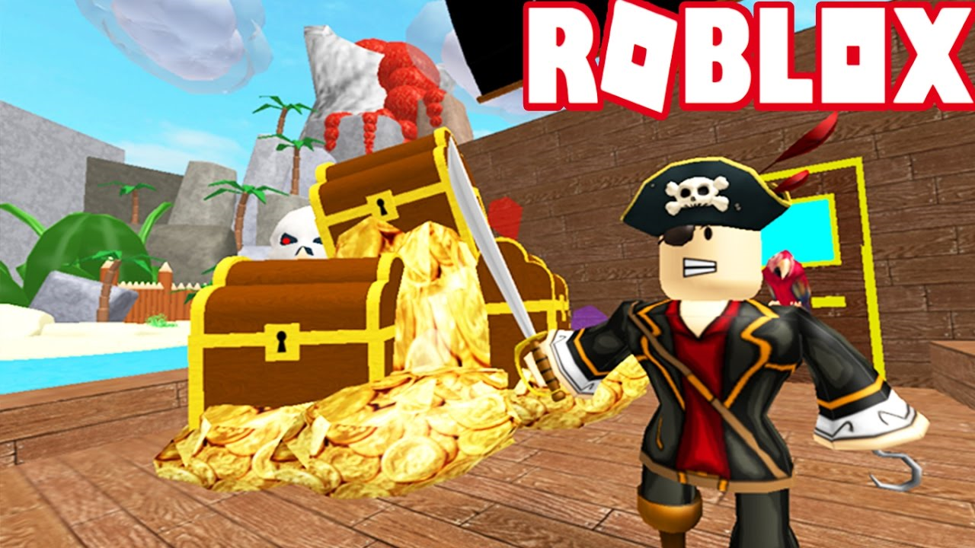 While it may not look like much, Roblox is incredibly “sticky.” It’s a multiplayer game that features many large, open worlds. Players create an avatar to wander around these worlds, interacting with the landscape and fighting cartoon monsters and opponents along the way.

But most importantly, players go to the worlds to hang out with each other. Roblox has become a social place for kids to meet up and chat. They can “friend” each other inside the game. And they talk to each other over wireless headsets.

So Roblox is really a social environment for kids where real friendships are formed. And existing friends connect online after school or in the evening. That’s why it is so sticky. In fact, the game now boasts 115 million active monthly users.

And the business model is incredible. The game is free to download. But once inside, players can buy all kinds of items, clothes, and goodies to enhance their experience. This model generated $110 million in revenue last year.

And here’s why this matters to us as investors…

Roblox just raised $150 million in a Series G venture capital (VC) round led by Andreessen Horowitz. The company is now valued at $4 billion.

Prior to Roblox, Minecraft was the hit social game for kids. Microsoft acquired it in 2016 for $2.5 billion. And Fortnite, a popular multiplayer game among older kids and adults today, is now valued at $15 billion.

Minecraft, Roblox, and Fortnite are first and foremost technology companies. And they are quickly evolving into social media platforms just like multibillion-dollar companies such as Facebook and Snap.

Most of the companies working in this space are still private, but I believe we will see some IPOs and acquisitions in the next few years. That will lead to some interesting investment opportunities.

And if I find an interesting investment opportunity, readers of my small-cap research service Exponential Tech Investor will be the first to know.

The rise of AI semiconductors…

When the mainstream press talks about artificial intelligence (AI), it is typically captivated by the bleeding-edge applications.

And while there is certainly a lot of money to be made on companies working with AI software, I’m on record saying that some of the best investment targets will be found with AI hardware makers. These are the companies making the AI chips… classic picks-and-shovels plays on AI and machine learning.

An early stage company called SambaNova Systems just raised $250 million in a Series C round. Among the investors were BlackRock, GV (Google Ventures), Intel Capital, and others.

If we remember, Intel acquired one of my favorite AI semiconductors companies, Habana Labs, for $2 billion last December. Well, SambaNova is another one I’ve been watching closely. And with this latest raise, it is now valued at $2.5 billion.

A team of executives from Sun, Oracle, and Stanford University founded SambaNova. The company been very quiet about what it is working on. But its first product is slated to come out in the first half of this year.

We don’t know exactly what that product will be… but SambaNova gave us a hint on its website: 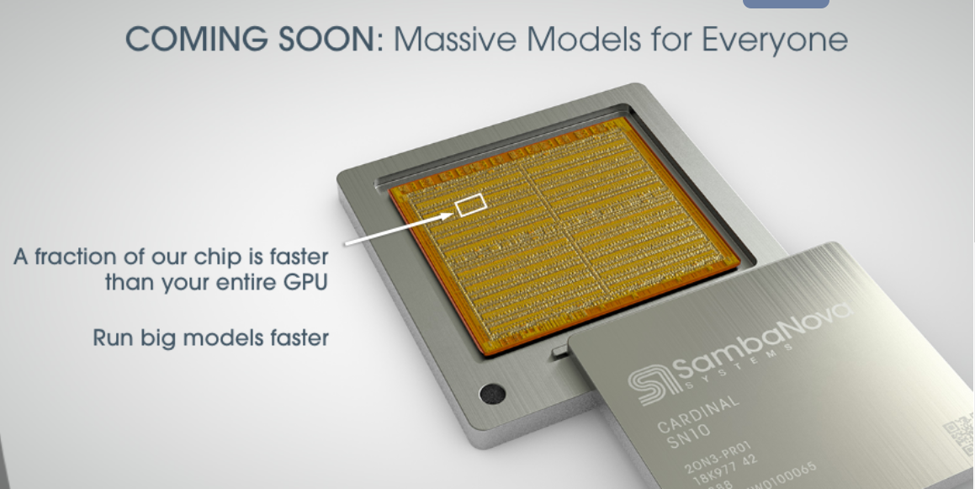 This tells us that SambaNova has a chip that it believes is better than the best GPUs put out by NVIDIA and AMD today. And if true, that would be impressive – so impressive that either company might try and acquire SambaNova.

This shows us how profitable it can be to invest in companies that produce the semiconductors that help power AI.

And personally, I think SambaNova is onto a breakthrough. I’m very excited about this product launch.

And I think it’s just a matter of time before a larger tech company comes in and writes a huge check for SambaNova, just like when Intel bought Habana Labs. That could create a fantastic investment opportunity for us.