What a roller coaster ride this week.

Up on Monday, down on Tuesday. Up on Wednesday, down today (Thursday).

The Federal Reserve contributed an emergency 50 basis points cut on the Fed funds rate to the range of 1–1.25%. This was the largest cut made since the financial crisis back in 2008.

And yesterday, the U.S. House of Representatives passed a largely political $8.3 billion bill to “battle” the coronavirus COVID-19, which includes:

That’s a lot of money to spread around.

It is definitely an election year…

In the meantime, I’ve never seen such an incredibly quick response from the private sector to work on diagnostics and vaccines… at zero expense to the taxpayers.

And I’d like to be clear about something: COVID-19 cannot be contained. It is far too late for that. With an incubation period of up to 14 days, and as an airborne virus, COVID-19 has been spreading throughout the U.S. and other countries for many weeks now.

And most people who contract the virus don’t know it. The symptoms are very mild, cold-like symptoms, not even worth going to see a physician for.

Our efforts should really be focused on risk mitigation and preparedness at hospitals and medical facilities, with the support of the private sector working towards a vaccine and dependable diagnostic tests.

As always, I’ll keep monitoring this situation. But for now, let’s turn to our insights…

The race to develop a universal quantum computer…

As a reminder, we’re now living in the age of quantum supremacy. Quantum computers are now exponentially more powerful than even the most advanced classical supercomputers. They may be limited in the kinds of problems that they can solve right now, but that won’t last for long.

This technology is going to have implications that few can predict right now. It will change how we secure data, how we conduct business, even how we invest…

And in the spirit of keeping readers up on this trend, there’s been a development from a promising early stage quantum computing company.

Rigetti, one of my favorites, just raised $71 million in its latest venture capital (VC) round. And Rigetti expects to raise another $12.5 million before the round is closed. That’s a significant VC round for a company that was just founded in 2014.

And with this latest round, Rigetti will have raised $166 million in VC to date. That’s powered a lot of progress…

Rigetti is currently running a 28-qubit system with impressive performance. It’s one of the most promising superconducting quantum computers in the industry. It’s even more impressive that it is coming from a small, early stage company and not an outfit like Google or IBM.

And Rigetti is one of the few companies to make its quantum computer available in the cloud. Anyone can simply set up an account and pay for computing time. That means any corporation, nonprofit, entrepreneur, government, or even hobbyist can take advantage of this technology today.

Powerful technologies like this used to be controlled only by large corporations and government agencies. No longer. Even at a such an early stage of development, the power of quantum computing is being democratized and made widely available. And smaller companies are on the bleeding edge of development, making incredible progress with relatively small amounts of investment.

I’ll have more to say about quantum computing on Monday. Stay tuned…

Big news on the blockchain front… Google is getting behind a promising project called Hedera Hashgraph.

What makes Hedera exciting is that it doesn’t need to lump transactions into blocks and then confirm those blocks, which is what most other blockchain technologies do. This allows Hedera Hashgraph to process more than 10,000 transactions per second. That’s fast enough to handle all credit card transactions globally every day.

Many readers may be familiar with Hedera Hashgraph. We received some questions about the technology in the past. And I even warned readers against buying HBAR when it launched last September.

At that time, HBAR had just plunged 77% from a $5 billion valuation to $1.2 billion. Many saw that as a massive buying opportunity given how promising Hedera’s tech is. But I knew better. I warned that HBAR would fall even further, and that recovery would take quite some time.

And that’s exactly what happened. From about $0.09 in September, the price per token fell to around $0.01 in January of this year. That’s an 89% decline. 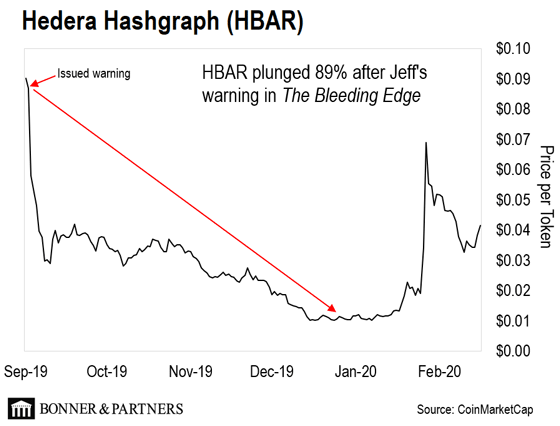 The project scraped around those lows for several months, seemingly left for dead. Until now…

HBAR has rocketed up to a $140 million valuation on news that Google has agreed to join Hedera’s governing body. This is a big vote of confidence. Even Facebook has had trouble getting companies to join the governing body for its digital currency Libra.

Google will also host part of Hedera’s network in its own cloud. That will help secure the network, which adds tremendous value to the project.

So this is a very positive development both for Hedera Hashgraph and the blockchain industry overall. I’m not, however, recommending HBAR at this time.

While the news is certainly positive, adoption has a long way to go. And Google’s interest in Hedera feeds its own best interests. After all, Google gets paid for hosting servers and storage in the cloud, so it welcomes anyone who might become a big user of its Google Cloud service offering.

The first country to launch its own blockchain-based digital currency…

Marshall Islands is set to become the first country to launch its own blockchain-based digital currency. That’s right – Marshall Islands. It’s a tiny country of 58,000 people in the South Pacific, about halfway in between Hawaii and Australia.

It is a tiny country, an atoll, that is so small it often doesn’t show up on an Asia Pacific regional map. And the country plans to go all-in on digital currency. It is working with a company called Algorand to develop its own state-backed digital currency. I have followed Algorand for several years now. It spun out of MIT as a promising blockchain project.

The currency will be called the Marshallese sovereign (SOV). It will run on the Algorand blockchain. And like Hedera Hashgraph, Algorand can process and confirm transactions very quickly without delays.

The SOV will be pegged to the U.S. dollar, mainly because the U.S. dollar is the official currency of Marshall Islands. However, it will feature hard-coded monetary policy. They plan to set inflation at a fixed 4% per year. That means new SOVs will be created at a rate of 4% per year.

The SOV’s fixed inflation rate will add an element of transparency and predictability to the monetary system. And because Marshall Islands is a small, contained ecosystem, it will serve as a great experiment for a state-backed digital currency. The rest of the world will be watching very closely to see how it plays out.

Bigger picture, I believe this is the precursor to the rise of national digital currencies. We already know that the U.S., China, and many other countries are looking into this. A successful implementation in the Marshall Islands may be one of the catalysts that spring these larger countries into action.

So, the race is on. In my 2020 Prediction Series, I said that this year marked the rise of state-backed digital currency. That prediction is already proving true. We shouldn’t be surprised in the near future when physical bills disappear and our paychecks are deposited directly into a digital wallet.

P.S. It will come as a shock to most when China announces its new state-issued digital currency. It will be an even bigger shock when the U.S. follows suit and makes the U.S. dollar fully digital.

But for those who see this move coming, it presents an interesting investment opportunity. I’ve been quietly preparing my readers for this trend with a handful of key investments. These companies will be essential as blockchain technology gains mass adoption. The full story right here.