On February 11, I wrote about the incredible Inspiration 4 mission being spearheaded by the CEO of Shift4 Payments, Jared Isaacman. It will be the first all-civilian orbital mission. And it’s set to launch either before the end of this year or by 2022.

As a refresher, Isaacman is funding the mission and linking it to a $100 million donation to St. Jude Children’s Research Hospital. And he’ll be flying the mission with three other passengers.

One seat will be granted to a St. Jude ambassador, a second seat will be raffled off to anyone who donates $10 or more to St. Jude Children’s Research Hospital, and the final seat will go to an “inspirational entrepreneur” who has used Shift4Shop to launch a business.

Little did I know that one of those “inspirational entrepreneurs” competing to go into orbit on Inspiration 4 is a friend of mine.

His name is Ruben Salinas, and it’s a name we’ll want to remember. You can see him in the picture below standing just behind me in the black t-shirt. 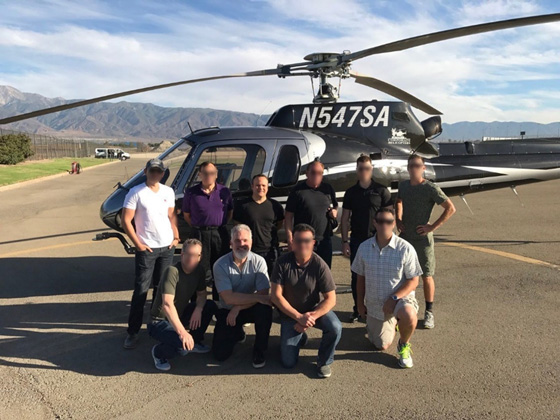 A while back, we traveled with a group of friends by helicopter from Los Angeles to the Auto Club Speedway in Fontana, CA. We had a bit of fun driving Ferraris, Lamborghinis, and McLarens as fast as we possibly could… preferably without incident.

We all had professional drivers with us to help improve our driving skills lap after lap. It was a fantastic day. Rumor has it that we drove the cars so hard, we drove the racing company out of business. True story.

His daughter was born prematurely at week 30 due to a rupture of fetal membranes. But it took the hospital eight hours to diagnose the rupture and begin the protocol to save his daughter. It could have been the difference between life and death.

And solving that problem became Ruben’s life mission. He aimed to develop a diagnostic tool to rapidly identify a rupture and save children’s lives. He joined a company with some promising technology and helped bring it to market. Diagnostics giant Qiagen eventually acquired that company.

And then Ruben did it again. He spun out from Qiagen and developed a new device that is used for preterm birth prediction. It has become recognized as the most accurate diagnostic test for preterm birth.

Imagine all of the children’s lives that have been saved through early diagnosis.

This brings me back to his daughter.

I’m happy to say that she is a very happy, healthy, and talented ninth grader.

In 2019, she and her team won a STEM-in-Action grant from the U.S. Army Educational Outreach Program’s eCYBERMISSION National Competition. This gave her team the chance to visit Washington, D.C., meet with members of Congress, and present their project on a nationally broadcast contest. What a great experience!

Now Ruben and his daughter have teamed up to start a new company called URLimitless Education to compete for a seat on the Inspiration 4 mission. Their company develops hands-on educational kits and an online curriculum to help build a strong foundation of intellectual curiosity, critical thinking, and technical skills in all children.

So I have a small favor to ask…

Ruben and I share the dream of going to space, and nothing would make me happier than to help him get there.

And here’s how we can help him.

Here is what you’ll see: 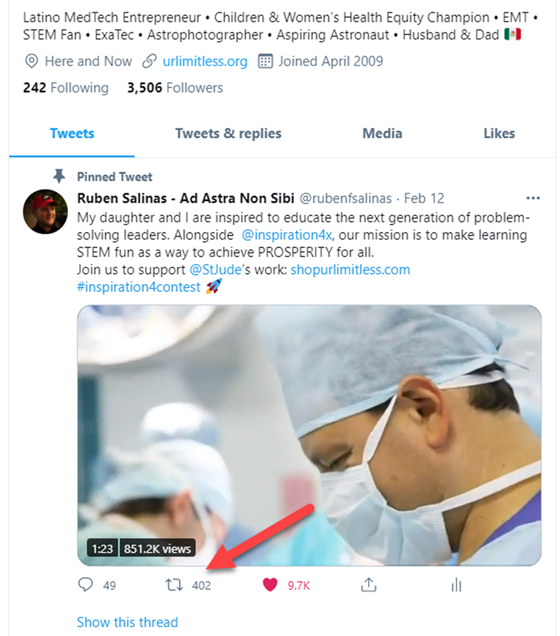 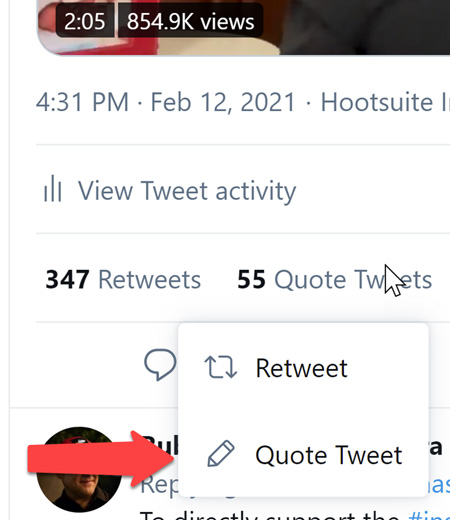 Please type anything supportive, such as “go Ruben!” And then add the following items: #inspiration4contest @StJude @rookisaacman

You can lend your support right here:

My daughter and I are inspired to educate the next generation of problem-solving leaders. Alongside @inspiration4x, our mission is to make learning STEM fun as a way to achieve PROSPERITY for all.
Join us to support @StJude’s work: https://t.co/4SH3Vshn8g#inspiration4contest 🚀 pic.twitter.com/qyZBeQFUC0

By doing so, our support will be registered in the contest. We will all have a hand in helping Ruben get to orbit and help him continue to be such an inspirational person. I know that he will continue to do amazing things after he returns to Earth.

The Bleeding Edge is a labor of love for me. It requires an incredible amount of time from me and my team to produce it every day. I hope that it provides inspiration and excitement to those who read it.

And I am committed to keeping it free so that it is accessible to anyone who wants to enjoy it.

So I hope that you’ll indulge me with this small favor to help my inspirational friend Ruben. All it takes is a few seconds to give meaningful support.

And if you believe in the incredible work being done at the St. Jude Children’s Research Hospital, we can always choose to make a donation and potentially win a trip to space.

And who knows? You might just find yourself sitting in the seat next to Ruben on the ride of your life.

We talked about Joby Aviation back in December when it took over Uber’s air taxi unit, Uber Elevate. As we discussed, Joby is developing what I believe is the next generation of air transportation.

To bring new readers up to speed, Joby is working on vertical take-off and landing (VTOL) aircraft. Its first product is a four-person craft that we can think of as a mini-helicopter. Here’s a look:

This craft can lift straight off the ground like a helicopter. And once in the air, the rotors spin forward, allowing the aircraft to fly straight at speeds up to 200 miles per hour.

What makes this aircraft even more unique is that it is all electric. That, combined with the rotor design, makes it exceptionally quiet. That’s not what we think of as a typical helicopter.

The goal with these aircraft is to create an intra-city air taxi service. Think of it as an Uber-like ride-hailing service for air travel. And the company just took the next step toward making that a reality.

Joby Aviation just announced that it is going public via a special purpose acquisition corporation (SPAC).

As a reminder, SPACs are blank check companies formed for the sole purpose of allowing private companies to go public by reverse merging into the SPAC. For the company going public, that process is much cheaper and less tedious than a traditional initial public offering (IPO). To learn more about my top SPAC recommendations, go right here.

And Joby isn’t going with just any SPAC. It is merging with the SPAC created by LinkedIn cofounder Reid Hoffman and Zynga founder Mark Pincus. It is called Reinvent Technology Partners (RTP).

And RTP is taking Joby public at an incredible $5.7 billion valuation. But Joby hasn’t even received approval from the Federal Aviation Administration (FAA) to deploy its aircraft yet. That won’t come for at least another year or maybe more.

And that means Joby won’t have any material revenue coming in for several years. Do we think a company with nearly zero revenues and extensive R&D costs is worth $5.7 billion?

I would caution readers to steer clear of Reinvent Technology Partners (RTP) and Joby Aviation. Investing at these levels won’t pay off for many years… if ever.

Still, I’m very excited to see Joby going public. That will give the company additional funds to advance its technology.

And I will remind readers that this comes on the heels of the Archer Aviation deal we talked about last week. Archer is developing its own fully electric VTOL airplanes. And it is also going public through a SPAC at a $3.8 billion valuation.

What we are watching here is the rise of the nascent air taxi industry in the United States. I wouldn’t be surprised to see several more companies in the space go public over the next 12–18 months as well.

Starlink’s internet service is gearing up for launch…

We have been tracking SpaceX’s satellite internet business Starlink closely in The Bleeding Edge. For the sake of new readers, the company’s stated goal is to create a satellite network around the Earth that can provide internet access to anywhere on the planet.

Starlink launched the beta version of its satellite internet service back in November. Musk called it the “Better Than Nothing Beta.”

Of course, the name refers to the fact that satellite internet cannot compete with the speed of cable TV internet services or fiber in the home.

Starlink announced that users can expect speeds between 50 megabits per second (Mbps) and 150 Mbps with latency between 20 and 40 milliseconds. By comparison, the average cable TV internet service provides speeds between 200 and 300 Mbps with much lower latency.

Still, I put my name on the list to sign up for Starlink. I always try to test out new technology in the field.

And I recently got an email saying that Starlink’s internet service will be available in my area later this year, perhaps as soon as the summer. The company is taking $99 pre-orders to reserve access.

Once it goes live, Starlink charges $499 for the satellite and the hardware. And then the service is $99 per month.

In the sign-up process, Starlink does provide a disclaimer saying that there may be periods with no connectivity. That means the network isn’t built out enough for continuous coverage.

That’s why SpaceX has been furiously launching satellites. It just put up another 60 satellites last week. That brings the total count to 1,145 satellites in low-Earth orbit. The short-term goal is to get to 12,000.

I’m excited to see Starlink’s service go live. I’ll certainly provide another update when I get it installed.

That said, satellite internet is not a replacement for our standard broadband services. And it is certainly not in competition with 5G wireless technology.

At speeds of over 1 gigabit per second (Gbps), 5G will easily be 10 times faster than satellite internet. And it has nearly zero latency. There’s no comparison.

Still, Starlink’s coverage will be great for people living in rural areas without access to a decent internet service provider.

And remember, the master plan is much bigger than just a satellite-based internet service…

Facebook just announced that it is developing a smart watch with a focus on health and fitness. This is basically a Facebook version of the Apple Watch. Facebook’s reputation for copying other company’s innovations persists.

To me, this is a desperate attempt to keep up with Apple in the wearable devices space.

After all, the Apple Watch has been a smashing success. It has now sold more than 100 million units worldwide. It’s no wonder Facebook is looking to get in on the action.

But there is one major difference with the smart watch Facebook is working on. It will be built for data surveillance.

Unlike Apple, Facebook’s entire business model is based on advertising. It seeks to collect as much personal data from consumers as it can. And then it sells access to that data to advertisers.

Facebook’s smart watch will incorporate elements of its social media and messaging platform. That’s how it will be differentiated from the Apple Watch. I’m sure these features will seem desirable to some existing Facebook users.

However, I would strongly urge readers to avoid Facebook’s smart watch at all costs. This is not a company we want to trust our sensitive health data with.

By comparison, Apple does not sell any data that is generated when its customers use its products. For those interested in wearable devices, the Apple Watch is a much better way to go.