I hope that at least a few Bleeding Edge readers dropped in to watch the incredible Virgin Galactic flight to zero g on Sunday. I insisted that my older son watch it with me.

Just as it will be with the scheduled July 20 flight of Blue Origin’s New Shepard rocket, Sunday will go down as a major milestone in history.

Other than a 90-minute delay caused by bad weather and some real-time audio and video streaming problems from the spacecraft, the flight was flawless.

The flight departed from Spaceport America in New Mexico attached to the belly of Virgin Mother Ship Eve, which took the Space Ship Unity to an altitude just shy of 50,000 feet.

The most exciting part of the mission was watching the release of Space Ship Unity from the Mother Ship and then the ignition of the rocket engine. After that, it was a pretty quick trip.

Unity rose to about 282,000 feet in altitude (53.4 miles) and experienced zero g for less than two minutes by my calculation. And then it glided back down to the spaceport. 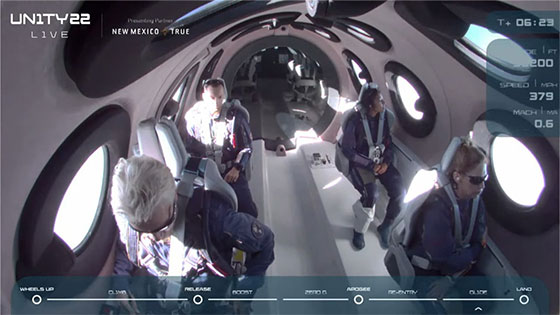 For perspective on how short the ride was, Unity was dropped from the Mother Ship Eve at 11:25 a.m. ET and landed at 11:39 a.m. That’s a mere 14 minutes, the majority of which was the glide back down to Earth from the apogee.

As I predicted, the “trash talk” has already begun between Virgin Galactic and Blue Origin. And it’s exactly over the point that I wrote about – the Kármán line.

As a reminder, the Kármán line is the altitude that is considered to be the delineation between Earth’s atmosphere and space.

Blue Origin was not so subtle in the message above by saying that “none of our astronauts have an asterisk next to their name.” The meaning, of course, is that if one doesn’t cross the Kármán line, they aren’t really an astronaut. I have to say that I agree.

But Kármán line aside, it’s still an extraordinary accomplishment and the result of more than 20 years of hard work. The origin of Space Ship Unity is actually from a company called Scaled Composites and its founder Burt Rutan.

Scaled Composites made history when it won the Ansari X-Prize back in 2004. It became the first privately funded spacecraft to reach space twice within two weeks. Its SpaceShipOne accomplished the feat, and it looks remarkably similar to the spacecraft that was used by Virgin Galactic yesterday.

It’s a testament to Burt Rutan’s design that has persisted for the last two decades and served as the foundation for a brand new commercial spaceflight service.

And if it couldn’t be more exciting, we have Blue Origin’s July 20 launch to look forward to…

Blockchain technology is now disrupting our legacy financial systems in a whole new way… And this time, its target is the stock markets.

It’s starting to happen with something called “synthetic” stocks. Tesla, Apple, and Netflix are just a few of the stocks – along with a few exchange-traded funds (ETFs) – that are now being traded on blockchain platforms like Mirror Protocol and Synthetix.

What is interesting here is that the actual stocks themselves are not trading on the blockchain. These digital assets reflect the price of the stock they track, but no shares exchange hands.

Hence, they are considered to be synthetic, or accurate representations of the equities that they are supposed to represent.

How does it work?

The system functions through a form of arbitrage – a process that allows somebody to take advantage of the price differences of similar items.

I know it sounds like financial engineering… And it technically is. However, with the right incentives in place and enough liquidity, it can function well.

This shows that the blockchain industry is not waiting around for equities to be tokenized. Nor is it waiting for the legacy system to grant it permission. Solutions for tomorrow are being built today.

And the real promise of this technology is the ability to do real-time settlement.

Right now, if you went to your brokerage and sold all your shares of a stock today, you would not be able to immediately transfer the funds out of your account. You couldn’t access your money because your stock broker needs to wait until the sale transaction has settled, which can often take as long as three days.

But with these synthetic stocks, our transactions are settled in real time, and our funds are immediately available.

This technology also enables anybody to access the public blockchain to find out how many tokens are in the market at any given time. It means we can see who owns what and what a company is ultimately worth.

Transparency and an accurate accounting of total shares issued are major problems that exist in the equity markets today.

We saw the issue arise earlier this year during the GameStop short sell situation, when hedge funds were selling shares on the market that did not exist.

Blockchain can put an end to this illegal practice of “naked” short selling, and it could help reduce price manipulation.

Now, all that being said, this space will take time to develop. So I don’t recommend investing in synthetic versions of Amazon or Tesla right now.

The synthetic solution still needs more liquidity for the token to represent the actual price of a stock share.

But we’re now seeing the ability to create an investable market for synthetic equities. And I forecast that this is just the beginning of a complete disruption of our legacy equity exchanges…

NCR, which stands for National Cash Register, is a company that supports 650 credit unions and smaller banks with an estimated 24 million customers. It provides self-service kiosks, point-of-sale (POS) terminals, ATMs, check processing systems, and barcode scanners as well as software and consulting services.

It’s commonly viewed as a very conservative company that doesn’t take many risks, which is why its recent deal is noteworthy.

The motivation for the move? NCR’s member banks were experiencing significant capital outflows. Customers were moving their funds out of these smaller banks and credit unions and onto exchanges like Coinbase to buy digital assets. That meant NCR and its customers were losing out on business.

So NCR decided to strike the deal with NYDIG to provide its clients with a way to buy bitcoin – and eventually spend it – right from their accounts.

What’s interesting here is the direction NCR can take at a later date with its POS business.

NCR provides digital banking services to ATMs and POS terminals in 160 countries. And it’s the largest provider of POS software to grocery and other retail stores globally with a 45% market share. This comes out to 180,000 restaurants, retail chains, and more.

That means through its POS software and ATMs, it can potentially offer easy access to digital asset services around the world. And it could help retailers accept cryptocurrencies like bitcoin and others as payment.

There is a lot of money to be made by collecting transaction fees. And NCR is likely planning ways to expand this initial deal beyond credit unions and community banks.

The company has had its best performance in the last decade – up over 200% from the pandemic lows – despite being what many investors would consider a “boring” business.

And witnessing a company like NCR moving into the digital asset space indicates how awareness and demand have grown even down to the community level for cryptocurrencies.

Given the reach NCR has in retail, we’re going to keep a close eye on NCR to see if there might be something bigger at play.

The newest version of a four-legged robot we follow at The Bleeding Edge just got loaded up with artificial intelligence (AI) and is gearing up for a launch to Mars.

Boston Dynamics is a company we’ve touched on frequently in these pages. We last covered its robotic dog, Spot, in January. The doglike bot can navigate various surfaces and carry loads.

Most recently, Boston Dynamics announced that it has created a new version of Spot in collaboration with NASA’s Jet Propulsion Laboratory.

The new version is called NeBula-SPOT, and it’s built with future planetary exploration in mind. You can take a look at the robot below. 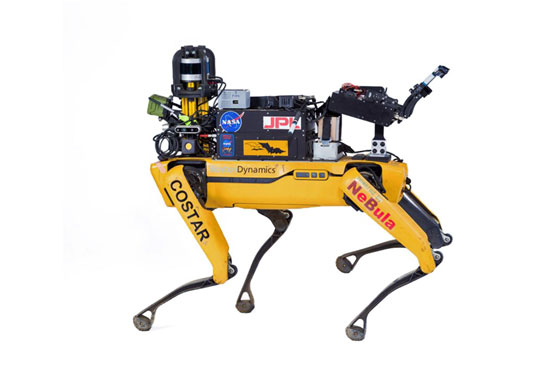 This robot can navigate more complicated structures than its predecessor, like subterranean caves. This means scientists can use it to explore new areas on Mars to find minerals, potential life forms, and even a future habitat for a colony.

And since it’s equipped with AI technology, the robot can autonomously explore these caves either individually or as a pack. No need for human guidance.

Who knows what we will discover?

This recent announcement is a significant step for Boston Dynamics, as the 29-year-old private company has made the rounds. It was originally spun out of MIT in 1992 before being acquired by Google X in 2013.

Google X then sold it to SoftBank in 2017 for a deal that was reportedly worth about $100 million.

And last year, Hyundai Motor Group announced it intended to acquire 80% of the company for $880 million – at a $1.1 billion valuation. Hyundai just completed the acquisition in June.

And what’s clear is that Boston Dynamics – originally a company heavily focused on research and design – is beginning to commercialize itself. The success of Spot also builds on its recent development, Stretch.

Readers may remember when we wrote how that robot was being used for logistics and boxing in warehouses. It can move 800 boxes an hour using its mobile and dexterous arm around the clock without succumbing to onsite injuries.

Boston Dynamics is targeting 150,000 warehouses and distribution facilities operating around the world with Stretch.

And this focus on commercialization means SoftBank’s investment into Boston Dynamics proved to be a great decision. It picked up the company at its bottom from Google and sold most of its stake for an 8x-plus gain. Moving forward, SoftBank still holds 20% of the company, giving it some additional upside potential.

As I’ve been watching the company’s progress toward commercialization closely, I had been hoping that Softbank would either sell Boston Dynamics to a U.S.-based, publicly traded tech company or spin it out for its own IPO.

We didn’t get so lucky, but who knows? Maybe that’s still the plan for Hyundai and Softbank.