Editor’s Note: For this issue of The Bleeding Edge, we are “unlocking” premium content from behind our paywall. It’s our way of thanking subscribers for reading.

Today, we’re sharing a reading from Jeff’s “Perceptron Market Radar.” The Perceptron is a proprietary neural network built by Jeff and his team. As Jeff explains, the Perceptron can spot patterns in the crypto markets that no human can see.

Read on to see what the Perceptron is saying about the current state of the crypto markets.

The human brain has long been the inspiration for artificial intelligence (AI). It’s an extraordinary organ, comprised of 100 billion neurons and connected in a complex and largely unknown web of interconnections… an incredible briar patch of connectivity.

Our brains are capable of incredible feats in a split second that the most powerful supercomputers struggle with today. And the brain can do this with about the same amount of energy that is required to power a small lightbulb.

It’s no surprise that scientists have long thought to create an artificial neural network (ANN) based on the structure and connectivity of our neurons.

I spent over half a million dollars and nearly a year building a neural network that can do precisely that. It’s a deep learning model referred to as a multi-layer perceptron, but to keep things simple, we’ll just call it the Perceptron.

The system is designed to manage any number of data inputs. It has many hidden layers that explore all possible outcomes. And, of course, it creates a predictive output that provides strong signals about which assets the Perceptron expects to move higher in the days and weeks ahead.

Put even more simply, we are “unleashing” the power of a neural network to predict which assets will move sharply higher.

And the asset class that I’ve decided to focus the Perceptron on is the cryptocurrency market.

Not only can the Perceptron “rank” individual digital assets, but it can also give us a “reading” on the future direction of the broader crypto market.

Let’s have a look… 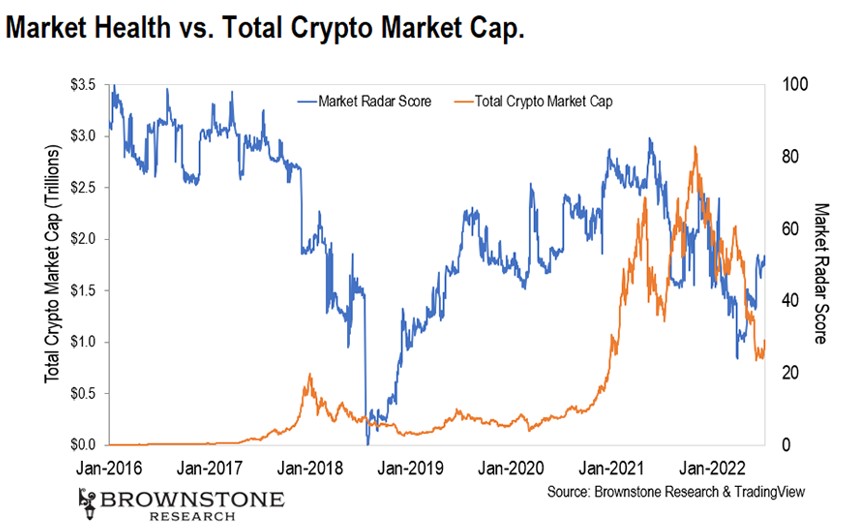 This “Perceptron Market Radar” (in blue above) is a visual snapshot of what the Perceptron is predicting for the crypto market over the course of the next 120 days.

It can look ahead, over the hill, around the corner, and give us a view of the overall cryptocurrency market forecast – based on the immense amounts of data that the Perceptron is ingesting and synthesizing.

There is some nuance to understanding this data. To make the most of it, we will have to understand two elements: the nominal radar reading and the directional trend.

The Market Radar Score – measured on the right y-axis from 0 to 100 – is our first overall indicator of market health.

Both the overall Market Radar Score and the direction of that score are important. Extremely low Market Radar Scores, like what we saw in 2018, are indicative of a bearish to flat market. And a rapidly climbing score indicates future bullish market conditions.

Let’s consider a few historical examples to see this data in action.

In July 2017, digital asset markets were still firmly in a bull market. The total market cap of crypto would reach its peak for this cycle in January. But let’s have a look at the Perceptron Market Radar during this time:

The radar reading began its downtrend in January 2018, eventually dropping sharply below the important 50 level in February 2018.

And as we can see, the total cryptocurrency market capitalization began to collapse in July 2018.

So, we may be wondering what the radar is saying for the next 120 days. Let’s have a look.

Fortunately, the market gauge has been climbing since May (remember that it looks ahead 120 days).

What’s interesting here is that we’ve just reached the end of July, and we’ve seen a sharp recovery in the broad crypto markets, as well as in Ether (ETH) and Bitcoin (BTC) – the two largest digital assets. And at the same time, the market radar has climbed back above 50.

Historically, anything above 50 has signaled healthy market conditions for cryptocurrencies. And as we can see in the chart above, we’ve been in a strong uptrend over the last few months. This is fantastic to see.

And for digital asset investors, it’s a welcome sign that healthier conditions could be right around the corner.

Dealing With the Crypto Contagion

As subscribers know, we have been dealing with arguably the worst market environment in the short history of cryptocurrencies and digital assets.

BTC and ETH have fallen 72% and 79%, respectively, from their all-time highs. And, of course, we’ve seen much of this volatility show up in our current trades.

But what’s important to understand is that the current market weakness is not being caused by any fundamental flaw in blockchain technology or decentralized assets.

In fact, there is more progress happening in this area of technology than at any other time in its history.

At a very high level, the root of today’s volatility has everything to do with excessive leverage concentrated into too few centralized entities.

The most visible example of this contagion was a Singapore-based crypto hedge fund, Three Arrows Capital (3AC). It’s estimated that 3AC had more than $10 billion in assets under management (AUM) at its peak.

3AC was also badly exposed to the LUNA cryptocurrency. Its investment – valued at $600 million at its peak – collapsed in the span of a few days.

Compounding the situation, 3AC was also heavily exposed to investments in stETH – a derivative of the digital asset ETH – and the Greyscale Bitcoin Trust. Both trades turned against the firm. As of July 12, 3AC officially filed for bankruptcy.

But the story continues…

Other centralized lending platforms in the digital asset space had lent money to 3AC, allowing them to execute their leveraged trades.

But here’s the most important thing we should understand… The volatility in digital assets has largely been caused by overly leveraged trades from institutional players going bad.

This is exactly why we are introducing the Perceptron Market Radar into our arsenal. We will utilize this tool to track the rebound of the crypto market in the months ahead.

And right now, the Perceptron is telling us better days are on the horizon.