I had been invited down to Rancho Santana on the Nicaraguan coast to speak to a small group of wealthy investors and family offices. The agenda was to discuss a technology investment idea that was safe enough for “family money” but still offered incredible upside.

Behind closed doors, in a small conference room overlooking the Pacific Ocean, I rose to address the audience. I began:

I’d like to talk a little bit about exponential technology, for context…

When you look at a typical graph, you see a very linear progression. So, if you think about consumer electronics, how they just tend to increase and improve 5% a year, how your refrigerator gets 5% more energy-efficient every year, or how automobiles improve their fuel efficiency, that’s linear technological progression.

Exponential is very different. It means that every year or every two years… it keeps doubling. You get to a point where you get to the elbow of the curve and you start to really accelerate in terms of what the technology is capable of doing.

To drive the point home, I showed this chart. 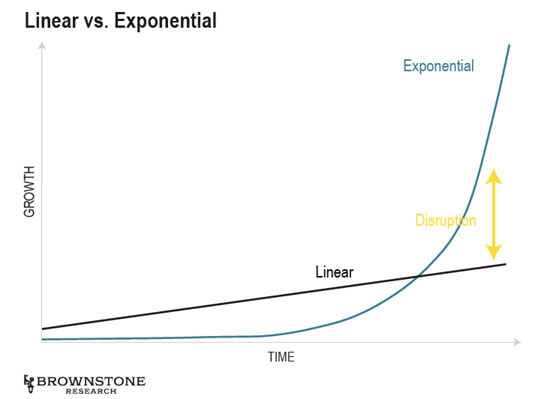 The point I was making is that humans are very good at thinking of linear growth, the black line. We tend to think things will progress steadily, at more or less the same rate, year after year.

But most of us are not capable of appreciating exponential growth, the blue line. Exponential growth sneaks up on us. It appears linear at first. But then it reaches a sharp “elbow,” and the trend goes vertical.

Exponential growth is the reason why it now costs less than $1,000 to sequence a human genome today when it cost $100 million in 2001.

Exponential growth in the processing power of semiconductors is the reason why the smartphone in your pocket has more computing power than the systems used to send a man to the Moon.

And exponential growth is the reason why companies like Apple, Amazon, and Netflix have returned thousands of percent to investors in the span of just a few years.

As an investor, spotting exponential growth trends is one of the best ways to identify a truly life-changing investment opportunity. That’s what I presented on that day in Nicaragua, the day I recommended NVIDIA (NVDA).

NVIDIA is a semiconductor company known today for its graphics processing units (GPUs). NVIDIA’s GPUs are used today to run artificial intelligence (AI) programs, among other things. We can think of it as the “workhorse” for AI applications in data centers today.

I’m certain readers have heard of NVIDIA. CNBC covers it almost daily. It’s regularly profiled in Bloomberg and The Wall Street Journal. But back in 2016, when I recommended the company, it was wildly misunderstood.

From my presentation again:

NVIDIA, the company that I’m going to speak about, is a semiconductor company. And it’s governed by Moore’s Law…

One of the interesting things is that Wall Street often misunderstands NVIDIA. The reason is, they still have this old perception that it’s just a gaming company.

I went on to say that Wall Street was not accounting for the exponential growth we were about to see in AI applications for data centers. And investors did not understand that NVIDIA’s products were perfect to accommodate this demand.

But for investors who could appreciate exponential growth, this presented an incredible opportunity. Have a look at how NVIDIA has performed since that day in 2016.

From February 2016 to its recent peak, NVIDIA has returned 1,860%. Every $10,000 invested would have turned into $186,000. That’s an incredible return from one stock in just a few years. And it has everything to do with understanding exponential growth.

Now – at the right valuation – I still think NVIDIA is a great long-term investment. But the bulk of its exponential growth has already come and gone.

I want to share with my readers the next exponential growth trend and reveal the stock I believe could rival NVIDIA in the years ahead.

5G wireless technology and infrastructure, biotechnology, cloud-based services, artificial intelligence, and semiconductor technology… These are key technologies that are changing the world around us and revolutionizing the ways we work, play, travel, communicate, and more.

And we’ve witnessed exponential growth in the adoption of new products and services like smartphones, e-commerce platforms, and cloud-based applications.

The companies that “rode the wave” of exponential growth in these markets became some of the best investments of the past two decades.

A $5,000 investment into each of these companies in the year 2000 would have now grown into a small fortune of $4.3 million.

I mention this because we are at the very beginning of the next major exponential growth story. And like the technology trends of the past, this investment trend will produce incredible returns in the years ahead. Only this time, I predict it will play out over months and years, not decades.

If any readers believe like I do in the transformative power of bleeding-edge technology – and would like to find out which company I think will be the next NVIDIA – then I encourage you to go right here. On October 21 at 8 p.m. ET, I’m hosting a special investment event. We’re calling it “Beyond Exponential.”

On that evening, I’ll reveal the most important growth story of the 2020s. And I’ll show readers how they can be positioned today with just a handful of investments.

I hope to see you there. You can reserve your spot right here.

P.S. I’ve recently been on a tour of America’s heartland, crisscrossing the country and traveling thousands of miles in order to capture the fastest-growing technology today. And during my summit, I’ll take attendees along for the ride.

If you’d like to see the outcome of all my research, this is an event you won’t want to miss. Please mark October 21 on your calendars. You can sign up for VIP text alerts right here as well to make sure you don’t miss a thing.