Could it be this simple?

Could a chemical known to be so simple, safe, and cheap actually be effective in fighting COVID-19? So cheap, in fact, that pharmaceutical companies aren’t interested in it? There just wouldn’t be any good profit margins.

I wrote about the efficacy of vitamin D very early on in the pandemic. I even received some pushback from a couple of team members at my publisher, but I already understood how well vitamin D stood up against past respiratory viruses… and that is precisely what COVID-19 is.

The only issue that the medical community had with regard to vitamin D and COVID-19 is that there had not yet been a randomized, controlled trial of the vitamin on patients who had contracted COVID-19 with symptoms.

Finally, the results from a trial that recently took place in Spain have been published. And the results are crystal clear.

And here are the results:

Wow. These are astonishing results. One of the authors of the trial, Vadim Backman of Northwestern University, estimates that just by using vitamin D, we can cut the COVID-19 mortality rate in half.

And the best part is that vitamin D is dirt cheap. As a supplement, it is usually less than a penny for each tablet. But for those of us who can get outside for 15–20 minutes a day in the sunshine, vitamin D is free. Our bodies naturally produce it when exposed to sunshine.

Those stay-at-home orders and arguments that the world should go on lockdown for another two months are looking dumber and dumber with each week that passes.

The data couldn’t be clearer. We have a long list of therapeutic options, many of which are safe and cheap, to manage COVID-19.

It’s time to open up, get back to work, provide in-person education to school-age kids, and aggressively protect those at risk… and give them some vitamin D and sunshine for good measure!

Not to be confused with nuclear fission – the kind of nuclear energy the world has used to produce baseload power up until now – nuclear fusion is the technology that can help meet the world’s clean energy requirements. It can operate 24 hours a day and produces little or no radioactive byproducts.

And Commonwealth Fusion Systems just released seven peer-reviewed scientific papers that reveal how its fusion reactors will work. This is the first time a private company has published its work on the science behind its own nuclear fusion technology.

As we can see, the reactors employ a spherical design, more specifically like a donut with a core in the middle. And they use superconducting magnets to control the plasma when in operation.

Rather than building one massive plant that costs tens of billions of dollars like other nuclear fusion projects have tried (for example, ITER in Europe), Commonwealth will be able to build many of these compact reactors at a fraction of that cost.

And each of these reactors will be able to produce 10 times the energy it takes to run them. In other words, 10 units of energy will come out for every one unit of energy that goes in. That basically means nearly free and limitless clean energy for the planet.

Commonwealth announced that it is in the process of developing the superconducting magnets right now. The company will conduct extensive testing on these magnets next year, and it plans to begin construction on its first fusion reactor before 2021 is out. That will keep the company on pace for achieving net energy production by 2025.

This is such an exciting development. And it sets up a two-horse race in the industry.

We have talked about TAE Technologies before. In fact, I’ve published a special research report profiling the work TAE is doing. Readers who missed that report can find it here.

TAE is taking a different approach to nuclear fusion. And the company believes that it can achieve net energy production by 2024.

I’m so excited to see not one but three private, early stage technology companies pursuing this incredible goal.

The third company is General Fusion in Vancouver, Canada. Solar and wind power generation are great, and we should continue to use those technologies.

But with very few exceptions, they are simply not capable of generating baseload, utility-scale energy production. And without that, we’ll never have a shot at getting the world off of carbon-based fuels.

Within three years, nuclear fusion will become one of the hottest topics in the world of technology. If you’re reading this, you are already far more knowledgeable about the technology than 99.99% of the population, and I plan on keeping my readers on the bleeding edge.

The latest on GM’s self-driving ambitions…

We have to check back in on Cruise today.

For the benefit of new readers, Cruise is the early stage autonomous vehicle company that General Motors (GM) acquired back in 2016.

We talked about the Cruise Origin back in January. The Origin is a fully autonomous vehicle that has the same dimensions as a crossover SUV… except there’s no hood, no side-view mirrors, no passenger-side windows, and most notably, no steering wheel and no floor pedals. 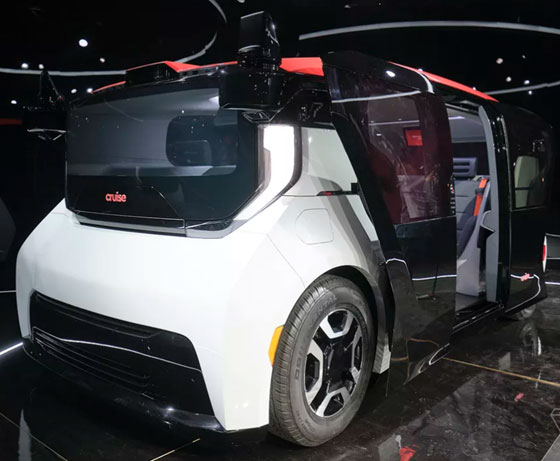 There was a lot of buzz around the Origin at first. But then COVID-19 hit.

Back in the spring, Cruise announced that it needed to lay off 8% of its workforce due to the pandemic. That led to some questions about whether GM would dial back its self-driving ambitions going forward.

However, GM just put those questions to bed. The company said that it is moving ahead aggressively with the Cruise Origin. The company expects the vehicle to go into pre-production next year and then full production in 2022.

What’s more, GM is going to invest $20 billion into its self-driving and electric vehicle (EV) programs over the next five years. This massive investment shows us GM realizes that self-driving cars and EVs are the future of transportation.

And GM knows that Cruise is its best chance at remaining relevant going forward. That’s why GM is pouring so much capital into the company.

And it is why GM allowed Cruise to take investments from companies like Honda, SoftBank, and T. Rowe Price. These third-party investments spread out the risk and help power Cruise’s R&D.

This was a smart move by GM due to its horrendous financial position – $128 billion of debt and a loss of $2 billion this year in free cash flow.

From my perspective, 2020 has been the year that autonomous driving got its start in the industry. We’ll see very advanced self-driving software released by Tesla before the end of the year.

And there are several limited-use deployments of autonomous vehicles around the world, including a few in the U.S. being led by Google’s Waymo division and a partnership between Lyft and Aptiv.

Next year is when we’ll see the technology more widely deployed and demonstrated to be safe. We should expect the regulatory discussions to pick up around the world and probably state by state in the U.S.

That’s not what we would expect from the world’s most valuable semiconductor company. What the heck is it doing developing videoconferencing technology?

But this is a shrewd move.

First, Maxine will use AI to realign users’ faces so that they always appear to be looking directly into the camera. The idea is to make people feel like they are getting direct eye contact when they do video calls.

NVIDIA has also developed a way to compress each video call down to about 1/10th of its normal size. That will reduce the bandwidth each call takes up, which in turn will improve speed and video quality substantially.

The AI achieves this by determining which parts of each caller’s face aren’t moving. Then it creates a static image from its analysis. That way only the movement of key facial points is transmitted over the call. That saves bandwidth, which improves call quality.

The approach is a clever and smart way to solve the day-to-day problems that we all experience with videoconferencing technology – audio delays, jerky video, talking over each other, frozen screens, a very impersonal feeling… I could go on.

The funny part about this is that for 30 years, the industry has been trying to make videoconferencing a “real” experience, but NVIDIA is actually using its artificial intelligence technology to create a “fake” image of us. It will create a real-looking avatar that is looking directly into the camera.

But the reality is that, with very few exceptions, the average videoconferencing service that we are used to really stinks.

So I believe NVIDIA Maxine will be a big improvement over existing videoconferencing platforms. Zoom may soon find that it has heated competition that it was not expecting.

Unlike Zoom, NVIDIA Maxine won’t be a direct-to-consumer platform. Instead, organizations will be able to license the technology for their own use. NVIDIA has strong incentives to make this successful because its cloud-based service runs entirely on NVIDIA’s graphics processing units (GPUs).

NVIDIA’s first customer is tech firm Avaya. This is the company that produces those frisbee-shaped speakerphones that are used in offices for conference calls, as well as videoconferencing solutions for enterprise businesses.

And I expect many more companies to follow suit and sign up for NVIDIA Maxine. It’s a great way for organizations to access bleeding-edge artificial intelligence tech as a way to enhance their current videoconferencing products.

We’ll keep a close eye on Maxine’s adoption. And that should put Zoom on notice.

I’ve warned readers several times not to invest in Zoom Video Communications (ZM) at these levels. Right now, the stock is trading at an enterprise value-to-sales ratio of over 100. That’s 100 times annual sales, not profits.

And with competition coming from NVIDIA, it’s all the more reason to steer clear of Zoom. I suspect its fall from grace will be brutal.

On Wednesday, October 21, at 8 p.m. ET, I’ll share all about the most important growth story of the next decade.

As I have said before in these pages, we’re on the cusp of a “new world order” right now.

The convergence of several bleeding-edge technology trends is reshaping society right before our eyes, and the COVID-19 pandemic only accelerated this massive shift. As a result, the way we do pretty much everything is about to change.

No doubt some people will be afraid of this shift. And the mainstream media will run alarming headlines designed to stoke fear. But we won’t be fooled.

Savvy tech investors who understand what’s happening will find some of the most incredible investment returns of their lifetimes over the next decade. We’re about to go beyond exponential.

During this summit, I’ll reveal how everyday investors can build a million-dollar tech portfolio – from scratch – in today’s market. These are the stocks I would personally want to own in my own portfolio.

For readers who are interested in attending, just go right here to reserve your spot.