Tomorrow is the day that I’ve been waiting almost 10 years for – Apple’s launch of its 5G-enabled iPhone 12.

I remember working in the wireless industry when I was at Qualcomm during the days of 3G. The industry was already preparing to make the transition from 3G, which was horribly limited, to 4G, which promised major improvements to the previous standard.

4G was a meaningful jump in wireless network speeds and an improvement in latency (delay). It promised download speeds of 100 Megabits per second (Mbps), which would have been an incredible jump over the 3 Mbps speeds that we typically saw over 3G networks.

But the reality was far different.

But 4G was enough to enable the smartphone-application economy that we are now so used to. Those speeds enabled companies like Facebook, Uber, Lyft, DoorDash, Instacart, and so many others to become multibillion-dollar corporations.

As a technologist, 4G wasn’t what I wanted. But as a businessperson, it was more than enough to enable the next step of becoming a digital economy.

5G is what I was hoping for back in 2010. It is revolutionary. And I know I’m not going to be disappointed. Why?

Because I’ve already experienced it firsthand in the field with my own eyes. And it’s unbelievable.

I’ve tested 5G networks now in about 15 cities around the U.S. on Verizon’s ultra-wideband 5G network. And I consistently had 1 Gigabit per second (Gbps) speeds with almost no latency at all.

That represents a 40X improvement over the average 4G wireless network speeds. 40 times faster… and the fastest test that I ran was 76 times faster than average 4G speeds.

I’ll be the first to say that coverage is limited right now in the denser city centers. Speeds also drop when connecting to the network indoors.

Network operators have over one million more 5G-base stations to install… as well as an untold number of indoor repeaters to maintain continuity of performance inside buildings.

This is why I’m so excited about 5G. The technology works exactly as designed, and the path forward is for wireless network operators around the world to invest and build these networks.

And from a consumer perspective, the demand is going to be incredible. Once consumers experience the power of 5G, they won’t want anything else. 4G will feel like an albatross of frustration.

And that is why Apple’s event tomorrow is so important. It is a coming of age for 5G. Until Apple launches the iPhone 12, things really won’t kick into high gear.

Apple launched its 4G-enabled iPhone 5 back in 2012. As we can see below, Apple’s iPhone sales jumped by more than 50% that year. Apple enjoyed a great run through 2015, with iPhone sales doubling compared to the 2012 numbers. 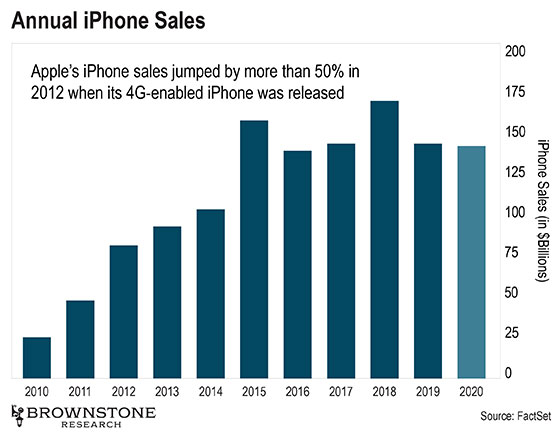 And I think we all know what’s next…

Apple’s iPhone sales are about to rocket.

I don’t expect the 5G-enabled iPhones to become available until November, so this year’s sales won’t have a major impact on 2020’s final results, but we are in for some record numbers in 2021.

And given that a new wireless generation only comes along every 10 years, we can expect the majority of all Apple users to upgrade their iPhones over the next 24–36 months.

This is a once-in-a-decade opportunity for investors to participate in this revolutionary upgrade to the world’s wireless communications infrastructure.

And it’s exponential growth like this that we look for as investors. Trends like these have the potential for truly life-changing gains.

As I mentioned on Friday, I’m planning to show readers the transformative power of bleeding-edge technology during the special investing summit I’m hosting on October 21 at 8 p.m. ET.

If you haven’t already, go right here to reserve your spot for free. And as a bonus, I’ll be sharing my No. 1 watchlist company with everyone who attends. I hope to see you there.

The next generation of air travel…

Last Wednesday was an exciting day.

We are one step closer to having supersonic commercial travel again.

It wasn’t too long ago when I last wrote about the early stage private aerospace company Boom Supersonic.

The company made good on its promise and launched its test vehicle, the XB-1. This is the first time in history that a small, private company has developed a supersonic jet.

This is the next generation of commercial aircraft.

The XB-1 is 71 feet long and made of advanced carbon composite materials. This reduces the weight and improves fuel efficiency while maintaining the strength to endure supersonic flight.

It uses three engines manufactured by General Electric: two under the wings and one on the top of the aircraft in front of the vertical stabilizer (vertical tail).

The aircraft is too sleek for a pilot to be able to see the runway on landing, so the XB-1 has high-resolution cameras to display the runway through the cockpit’s vision system.

Testing of the XB-1 will begin next year.

Why do we care? Simple… travel time.

My only regret? Boom didn’t develop this aircraft sooner.

I’ve traveled more than five million miles around the world over the last 30 years. And I did it all the hard way, on comparatively slow Boeing or Airbus commercial aircraft or (far more comfortable) corporate jets.

I can’t wait to fly supersonic.

Toyota’s unique approach to a robotic helper in the home…

Toyota isn’t typically a name that we would associate with robotics technology or consumer electronics.

It is one of the largest and most successful automotive manufacturers in the world. But while most wouldn’t guess it, Toyota is one of the most progressive robotics research organizations on the planet through its Toyota Research Institute (TRI) division.

I remember back in late 2015 when Toyota made headlines by establishing its new R&D arm. The company announced that it would invest $1 billion over five years in TRI, which would be headquartered in Palo Alto, CA.

Why Silicon Valley and not Japan? Japanese companies are excellent at manufacturing and quality control… basically, they’re great at the “hardware.”

But they lag greatly behind in the skills to develop leading-edge software and artificial intelligence. And that is the key to highly functional robots.

TRI has developed a vision for home robotics, specifically for the kitchen, by taking advantage of some space overhead… the ceiling.

TRI’s Gantry Robot Assists With Chores in the Kitchen 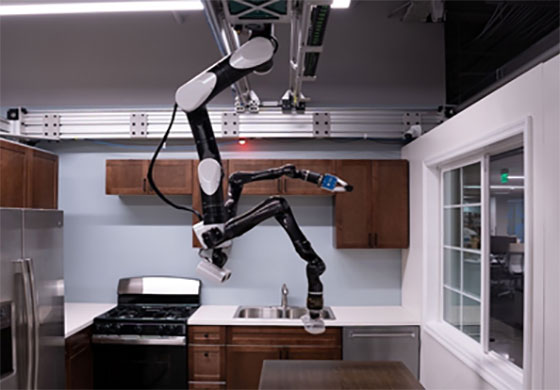 TRI calls the innovative ceiling-mounted robot a “gantry robot.” The word gantry references an overhead support mechanism for something carrying out a function… in this case, a robotic arm.

By placing the robot on the ceiling, the developers gave the robot a wider range of movement throughout a kitchen, even allowing it to clean areas that are out of reach without a step ladder.

Its primary use is for working with a dishwasher or sink, wiping surfaces, and keeping the overall kitchen clean. The gantry robot has soft-gripping “hands” that can manipulate just about anything safely.

While this approach might not be widely used in homes with large kitchens, it would likely be well received by homes/apartments in Asia or even parts of Europe where smaller kitchens are quite normal.

While there is clearly an aesthetic trade-off, the robot does fold up toward the ceiling when not in use, and the added convenience and time savings will probably be attractive to millions around the globe.

If we couple TRI’s gantry robot with a floor cleaner like iRobot’s Roomba and perhaps a mid-size bipedal/quadrupedal robot (perhaps from Boston Dynamics) that can navigate the house, we’d be pretty darn close to the future that the 1960s cartoon show The Jetsons predicted.

Uber’s business model is not my idea of staying on the bleeding edge.

The company, which so many of us can’t imagine living without, continues to burn through cash like nobody’s business. Uber is on track to have negative free cash flow of $4 billion this year.

At this rate, it is not yet clear if Uber has enough cash to survive the next 24 months.

That certainly doesn’t mean that it would go bankrupt. It just means that it will likely need to raise additional capital at some time in the near future to make up for any potential shortfalls.

Since its May 2019 initial public offering (IPO), the company’s share price is still down about 18% from its offer price of $45 a share. Not good.

In an effort to reduce the bleeding on its balance sheet, the company announced that it raised an additional $500 million in a funding round led by the Greenbriar Equity Group. The funds specifically were invested in Uber’s Uber Freight business, which most of us don’t even realize Uber has.

Uber Freight is a marketplace that matches truck drivers with shippers for moving cargo. The freight industry has traditionally been full of inefficiencies. It has been waiting for digital disruption to optimize the industry and reduce the number of empty semitrailers traveling across the country.

The freight market in the U.S. is an old-school business that is heavily dominated (controlled) by traditional freight operators. Uber Freight is still small, as it is breaking into this market. It generated $211 million in revenue in the second quarter this year.

The business is not profitable… hence Uber’s willingness to take in outside investment.

This isn’t the first time Uber has done something like this. As we have written about previously, Uber sold off parts of the Advanced Technology Group, its self-driving technology division, to Toyota, DENSO, and the SoftBank Vision Fund back in 2019.

Uber is frantically trying to shore up its finances and get cash flow to breakeven while at the same time preserving its core business of ride hailing. The company clearly has a long way to go… with a very limited number of assets that it can sell off to raise additional capital.

I bet that the company will have to access the public markets via a secondary offering. It will have to issue new equity at the expense of existing shareholders. It won’t be this year, but I predict it will be within the next 24 months.

P.S. I’d like to pose a question to readers. It’s something that every serious technology investor should consider.

What is the single most important factor to identifying an incredible technology investment?

In these pages, we often talk about valuation, go-to-market strategies, and technology companies with unique products and services. Understanding these concepts is very important for investors.

But there’s one more element that can change an investment from just “good” to “life-changing.”

Exponential growth is one of the most powerful forces in technology investing. Readers already know this type of growth.

The companies that “rode the wave” of exponential growth in these markets became some of the best investments of the past two decades.

A $5,000 investment into each of these companies in the year 2000 would have now grown into a small fortune of $4.3 million.

I mention this because we are at the very beginning of the next major exponential growth story. And like the technology trends of the past, this investment trend will produce incredible returns in the years ahead. Only this time, I predict it will play out over months and years, not decades.

If any readers believe like I do in the transformative power of bleeding-edge technology, then I encourage you to go right here. On October 21 at 8 p.m. ET, I’m hosting a special investment event. We’re calling it “Beyond Exponential.”

On that evening, I’ll reveal the most important growth story of the 2020s. And I’ll show readers how they can be positioned today with just a handful of investments.

I hope to see you there. You can reserve your spot right here.