Uber inks a $1 billion deal ahead of its IPO…

Last week, Uber struck a $1 billion deal with three Japanese companies – SoftBank, Toyota, and Denso. In exchange for the $1 billion investment, Uber will sell 14% of its self-driving unit to those companies.

Uber will maintain majority control as part of the deal. But the self-driving unit will be restructured with its own corporate board made up of representatives from Softbank, Toyota, and DENSO… giving the unit a degree of independence from Uber.

Basically, Uber is creating a separate corporate entity out of its self-driving unit. This comes just weeks ahead of Uber’s historic IPO.

And here’s why that is a smart move…

So this deal gives the self-driving unit a billion-dollar cash injection for further R&D… And it gives Uber great flexibility going into its IPO.

In the future, Uber can spin out the division… solicit further investment… or even sell it outright.

That’s right, a zero-revenue R&D self-driving unit is worth $7.25 billion to investors.

That’s powerful. It tells us how valuable these self-driving assets are… And it gives us insight into how much money is at stake with autonomous driving technology.

Self-driving cars are coming much faster than most think. And it is going to be a massive market ripe with terrific investment opportunities.

Facebook is now applying its AI technology toward developing a voice assistant… And it’s going to be a game-changer.

On Tuesday, we talked about how Google’s voice assistant can now make phone calls for you. Well, Facebook is taking a different angle with its voice assistant… And it will revolutionize augmented reality (AR) and virtual reality (VR) technology.

As you may know, Facebook develops the popular Oculus Rift VR headset… And the Oculus Rift S, which is the second generation of the Rift, is scheduled to come out this spring – probably next month.

The Oculus Rift is a fantastic VR headset as it is… And I believe Facebook will integrate its voice assistant technology into the second-generation model.

I don’t know if the voice technology will be ready at launch, or if it will come later… But it will ultimately open the door to mass adoption of AR/VR headsets.

Why do I say voice command is a game-changer?

Right now, we are all hunched over our smartphones and tablets, straining our eyes, and tapping on tiny keys.

And even VR headsets require you to use handheld controllers. This is not the ideal way to interact with your devices.

But Facebook adding voice control to the Oculus Rift S will pave the way for voice-controlled AR headsets. And that’s what will ignite the next mass-market consumer frenzy.

I believe AR headsets will be everywhere when they are voice-controlled. They will eventually replace your smartphone.

And by the way, there are enormous investment implications here.

$4.6 billion of venture capital flowed into AR companies over the last 24 months. The best of these companies will go public within the next few years.

What’s more, the market for the 3D-sensing technology that powers AR devices will more than double over the next four years… growing from $1.8 billion to $3.9 billion.

The companies capturing that revenue growth will see their stock prices skyrocket.

Apple strikes a deal with Qualcomm…

For the last two years, Apple and Qualcomm waged a global legal battle over patent licensing – fighting in U.S. courts… German courts… and even Chinese courts. But the big news in wireless is that these two giants just settled their feud, ending all litigation worldwide.

The feud stemmed from a wireless licensing model Qualcomm put in place back in the 1990s. The model said that Qualcomm would receive a single-digit percentage of the average selling price of EVERY phone manufactured due to the use of its intellectual property.

That was back when Qualcomm was basically the only show in town when it came to wireless CDMA chipsets.

And that licensing model has been in place ever since. For the last 20-plus years, smartphone manufacturers using 2G… 3G… 4G… and now 5G technology had to pay this royalty fee of around 4-5%, irrespective of whether the phone was using its semiconductor.

Manufacturers that used Qualcomm’s semiconductor paid for both the royalty and the chip.

Talk about a lucrative deal!

These royalty payments have typically made up between 38-50% of Qualcomm’s annual revenues.

But Apple has refused to pay up.

And it has even been working on its own 5G modem to get around using Qualcomm’s. Apple’s argument is that the wireless industry has evolved so much that this business model is no longer fair.

There have been so many companies that have contributed to wireless intellectual property that Qualcomm isn’t the only show in town anymore. So why should it get a percentage of the selling price of every phone manufactured on Earth?

Well, terms of the settlement were not announced. But I believe Apple was able to extract a major concession from Qualcomm, probably in the form of a lower-percentage royalty payment.

The battle between the two companies was a major drag on Qualcomm’s share price. We could see the effect of the settlement. Qualcomm jumped more than 20% on the news, adding an additional $26 billion in market cap. 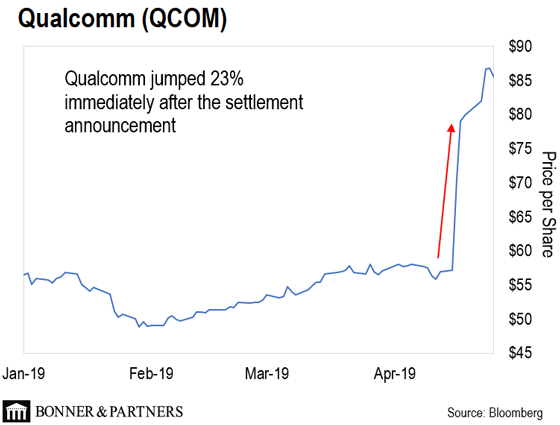 The agreement is for six years, and Apple has agreed to use Qualcomm’s wireless modem semiconductor as part of the deal. This also eliminates the need for Apple to develop a component like this, which isn’t related to its core business.

We might think this is a great investment opportunity in Qualcomm. But that’s not necessarily the case. The company has been range-bound in trading over the last five years, between $45 and $80. And the company is well-valued now on the back of the news of the deal with Apple.

Qualcomm’s struggle has always been its inability to break into new markets that are not related to the wireless industry.

I don’t see that changing in the near future.