Here’s an interesting development… News is out that Walmart is now using AI in its stores. That’s right, the traditional, low-end retailer has gone high tech.

This move is all about self-checkout.

You have likely seen the self-checkout kiosks at retailers like Walmart, Home Depot, and various grocery stores. They let you scan and bag your own items rather than waiting in line for a cashier.

As we talked about with Amazon Go, self-checkout is the future of retail. Walmart recently expanded its self-checkout kiosks, hoping to keep up… But it led to an uptick in thefts.

It’s estimated that Walmart loses $4 billion each year to theft. And much of that comes from the self-checkout line. It’s been easy for customers to place items in the bag without scanning them.

So how much loss is occurring at the self-checkout? Walmart doesn’t know for sure. That’s where the AI comes in.

Walmart just deployed AI-powered computer vision cameras in 1,000 stores. These cameras “watch” every self-checkout kiosk. When an item is not scanned, the AI alerts a checkout attendant. The attendant can then approach the customer to solve the problem.

This is a smart use of AI. Walmart invested $500 million into this technology… But that’s minor compared to the $4 billion in theft each year.

So here’s a fair warning to all Walmart shoppers (including me)… Let’s make sure we scan all items at the checkout counter. The AI is watching.

If you recall, I attended Amazon’s inaugural re:MARS conference earlier this month. At the invite-only event, I gleaned great insight into the company’s recent moves… including the unveiling of its new delivery drone.

Well, Amazon is not resting on its laurels.

It was just announced at the annual Paris Air Show that Amazon is expanding its fleet of cargo jets. The company just leased an additional 15 Boeing 737-800s. 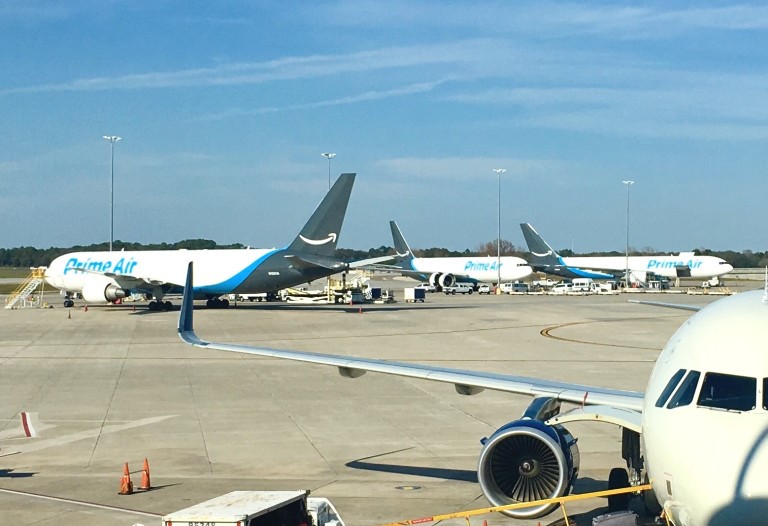 And that’s not all. Amazon announced that it expects to have at least 70 jets in the air every day by 2021. It even created the Amazon Air network to manage the fleet. Amazon Air has secured access to 20 airports around the U.S.

Amazon’s stated goal is to get its delivery service down from two days to one for Prime members. And I have no doubt it will do that… But there’s more going on here.

Most people think of Amazon as just an e-commerce company. What we don’t see is what is happening in the background.

Amazon is building out one of the largest logistics networks the world has ever seen. Its massive network of trucks and warehouses spans the United States and several other countries. And ramping up its aircraft fleet will make Amazon untouchable when it comes to package delivery.

Make no mistake about it… This is a direct threat to UPS, FedEx, and even the U.S. Postal Service.

We are approaching the day when Amazon will be the company of choice for all package delivery… even for items not sold through its platform.

Amazon will take billions of dollars of business from the incumbents. They simply won’t be able to compete. Amazon will deliver faster and cheaper because its logistics network will be far superior.

Simply put, this company is unstoppable. Amazon wasn’t the first company to hit a $1 trillion valuation… But it will be the first to $2 trillion.

The manufacturing renaissance is underway…

News just came out that Apple is asking suppliers to shift 15–30% of production out of China and into Southeast Asia and Mexico.

Here’s the rub… Over the last 20 years, it’s almost been a requirement to manufacture electronics in China. The cost of labor was so cheap that companies could not afford to manufacture elsewhere. They wouldn’t be able to compete if they did.

As a result, vast manufacturing infrastructure was built in China. The model became highly centralized with the majority of production coming from just one country.

Today, Chinese labor is no longer cheap. China has enjoyed one of the most extraordinary economic booms over a 20 year period that the world has ever seen. And wages have risen accordingly… Many argue that China is no longer a developing country.

The comparative advantage is gone… But the vast infrastructure remains. That’s why companies have continued to manufacture in China. But that is changing rapidly…

Apple’s move tells us those days are over. Here we have one of the biggest companies in the world moving 15–30% of its production. That’s huge. And I guarantee other companies will follow suit.

In short, we are seeing a major shift away from centralized manufacturing.

Yes, Southeast Asia and Mexico will benefit… But so will the United States. Indeed, it already has. We are seeing a large increase in U.S. manufacturing jobs for the first time in decades.

And we will see more and more high-tech factories installed across the country as the trend plays out.

Of course, President Trump’s trade negotiations have been the catalyst over the last 18 months. Trump has been smart and calculating with his dealings… systematically ratcheting up the pressure and tariffs over time throughout the negotiations.

That will light a fire under the U.S. economy… and the best tech stocks as a result.