If you pay attention to the mainstream press, ride hailing company Uber is in big trouble…

The stock opened for trading last Friday nearly 7% below its IPO price of $45 per share. And by Monday, UBER had dropped 18% from the IPO price. 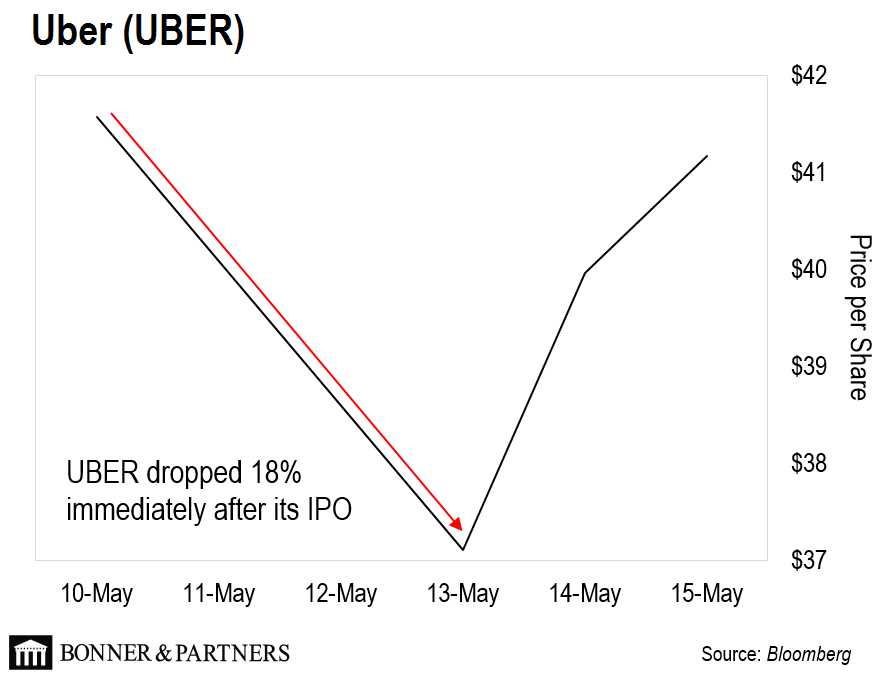 With a performance like that, you might think the company is in hot water. If you trust the journalists, you’d believe that Uber’s IPO was one of the least successful ever. But nothing could be further from the truth.

Uber is one of the most incredible investments the world has ever seen. That’s what the mainstream press won’t tell you.

Uber was founded in October 2010 with $1.6 million in seed money. The company was valued at $5.4 million at that time.

At the time of Uber’s IPO last week, the company was valued at $75.7 billion. That means those early investors were up 1,401,752% on their investment. That’s an incredible return in less than nine years.

The truth is, this early volatility in Uber’s stock is par for the course. Most IPOs are volatile within their first six months of trading. Just look at LYFT… It is down 36% since its day-one closing price.

That’s because it’s a trader’s market, at first. IPOs often come with a lot of hype. High-net-worth IPO investors who want access to Uber’s shares before the IPO often bid the price.

They are willing to pay more to get pre-IPO shares. That creates the perfect environment for trading. Not investing.

That’s because venture capital (VC) firms and private investors usually have a six-month lockup period before they can sell shares. For that reason, we often see heavy selling into the lockup expiration date, which is typically six months after the IPO.

That’s when the best IPOs become undervalued. And it creates a fantastic buy window for savvy tech investors. I call this the “Magic Window.”

In the case of Uber, I can tell you we will see a lot of selling around the time the lockup expires in six months.

As you can imagine, the VCs backing Uber will want to cash out on at least a portion of their investment at that time. After all, some VCs have been sitting on their investment for nearly nine years.

And that’s when Uber may become a great investment opportunity.

Now that it’s public, Uber will work first towards generating free cash flow and then, eventually towards becoming profitable. And for high-growth companies that still have plenty more upside, free-cash-flow generation is the key to long-term success.

Uber has lots of levers to pull. The company can slow down expansion in new markets… or pull out of markets that aren’t doing well. And self-driving cars will ramp up Uber’s profitability in a big way in the coming years.

So, what Uber’s share price does over the next six months is irrelevant. Uber was able to receive a $75.7 billion valuation at the time of its IPO. And it achieved this by delivering a dramatically better, cost-effective, and more convenient product the consumers love… all in less than nine years. Incredible.

I call that one heck of a successful IPO.

How to go from selling high-end vacuums to electric vehicles…

Dyson is a company that makes fantastic vacuums. You may be familiar with them. I have two myself.

Well, Dyson was just issued a patent for an electric vehicle (EV). According to the draft design in the patent filing, Dyson’s EV is being designed in the United Kingdom and will go on sale in 2021. 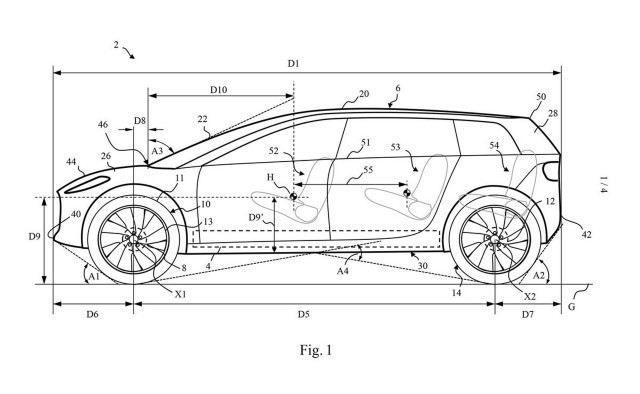 I promise you, the mainstream will dismiss this news… If they even notice it. But Dyson’s move into the EV market is interesting.

Dyson has a history of outstanding design for its products. And it has been quietly working on its EV design since October 2015. That’s when it acquired a battery company called Sakti3 for $90 million.

I was following Sakti3 at the time, because its battery technology caught my eye. It was working on solid-state lithium-ion batteries that were much different from the industry standard. These batteries have higher power density. That means you can use less battery for the same amount of power. And it makes them lighter and cheaper for consumers.

I thought Sakti3’s battery tech had the potential to be revolutionary not only for EVs, but for portable electronic devices, as well.

It’s easy to understand Dyson’s strategic reason for acquiring Sakti3. It clearly believes that it has a strategic advantage in the EV industry, due to its acquired battery technology.

Today, batteries make up 50% of the cost of an EV. Dyson will bring that cost down with what it clearly believes to be superior technology.

So, don’t dismiss the company’s EV ambitions. These bold pivots can be wildly successful. And Dyson’s acquisition may turn out to be a brilliant move.

Remember, Apple was known as a computer maker for most of the company’s life. Then, in 2007, Apple got into the smartphone market with the iPhone.

The rest is history…

While I remain extremely bullish on Tesla in the long run, as one of the world’s leading artificial-intelligence companies that happens to also make EVs, I also expect a new entrant, like Dyson, could be a strong challenger to the industry.

It has a much better chance of competing than the traditional automobile manufacturers do.

Given the scale of investment required to manufacture EVs, I expect Dyson will have to access the public markets to raise additional capital.

This could potentially mean a possible IPO in the near future to raise money for its expansion into the EV market. That makes it a company to watch in the coming years.

Amazon has employed AI-powered robots in its logistic centers for years now. When an order came in, the robots picked the products off the shelf and took them to the packaging center. There, a human would package the products and slap a shipping label on them.

Well, Amazon just replaced the manual labor required to perform those tasks. It just deployed machines that can automate the process to build the boxes and pack orders for shipping. That makes its warehouses nearly fully autonomous.

Simply put, this is incredible.

Amazon is using AI and robotics to perform complex tasks. This makes the company more efficient. And its products will be cheaper for consumers.

What’s more, this will allow Amazon to get to its goal of delivering orders in hours, not days.

Now, I know it might sound worrisome to talk about replacing somebody’s job with a robot. But think about it – this is low-value, tedious work that nobody really wants to do. Machines are much better suited for these tasks.

And I promise, more jobs will be created by artificial intelligence than lost.

Entire businesses will spring up to train AIs and maintain robots. And entire industries will be created that don’t exist at all today.

From the printing press… to steam power… to electricity… to the internet… we have seen this story play out over and over again in history.

And despite the Malthusians that always rise up, human civilization continues to march forward.

And even Warren Buffett, who ignored Amazon for the last two decades, finally understands the value of what Amazon is doing. He says he was an “idiot” for missing this investment opportunity for so long.

P.S. One last thing before you go…

I’d like to invite you to be my guest for the second annual Legacy Investment Summit in Southern California, from September 23-25.

I truly enjoyed meeting subscribers in person last year, shaking your hands, and hearing how my research has helped you.

This year, you can look forward to a new presentation from me, plus a host of other analysts from Legacy Research.

And of course, there will be cocktail hours, meet and greets, and entertainment. I hope you can make it this year.

There is an early-bird discount running through May 31, so get the details right here.