For our readers based in the U.S., happy Memorial Day. We hope you are enjoying this special day. Here at The Bleeding Edge, we’re hard at work, so our readers don’t have to be. Unlike many in the industry, our work ethic is different. Holidays, nights, weekends, it doesn’t matter. The world of technology never takes a break, neither do we…

Tesla quietly turned down the offer, and it wasn’t leaked to the press… until now.

But this confirms the rumors of an Apple-Tesla match-up that have been swirling for years now. I know this sounds like an odd pair, but such a deal would make sense.

Apple and Tesla products have similar design aesthetics. They both have a primary focus on simplicity and user experience. Tesla is like the Apple of the automotive industry. While its hardware (its electric vehicles) are beautiful, the real value is in the software.

What’s more, each company brings something to the table that the other needs.

For Apple… They are desperate to make progress on their autonomous driving technology.

Google has run circles around Apple in this area with its self-driving division, Waymo.

With Tesla, Apple could one-up Google. They would get all of Tesla’s artificial intelligence technology that enables its cars to drive themselves.

And for Tesla, Apple would bring hundreds of millions of passionate customers that are potentially future Tesla buyers. And in the short-term, it would bring a seemingly unlimited supply of cash to invest in building out Tesla’s long-term vision.

Tesla is trying to do in ten years what it took Ford one hundred years to do: Build one of the largest car companies on the planet. And on top of that, Tesla is also building one of the world’s best artificial intelligence (AI) companies.

That’s a big task. And it takes a tremendous amount of investment to accomplish this in such a short time frame.

Apple is sitting on $235 billion in cash. Apple could easily inject 10% of that – around $23 billion – into Tesla to expedite the vision.

This would provide Tesla with more than enough money to complete its vision of fully autonomous vehicles and expand its geographic coverage throughout all major markets around the globe.

Tesla would no longer have to be subject to all of the bears on Wall Street that are focused on short-term, quarterly results. The company wouldn’t have to deal with investment banks that misunderstand Tesla as a traditional car manufacturer rather than one of the most advanced artificial intelligence companies in the world.

Interestingly, the 2013 offer looks pretty good today with TSLA falling to $190 per share.

I doubt that CEO Elon Musk would ever “want” to sell… But I would be very surprised if Apple doesn’t quietly make another bid for Tesla… if it hasn’t done so already.

The 2-mile tunnel beneath the Las Vegas Convention Center…

Speaking of Elon Musk, he founded a tunnel construction company called the Boring Company in 2016. Most believed this was madness. How could Musk take on another major project when he clearly has his hands full with Tesla and SpaceX?

Perhaps disappointing to skeptics, Musk and team have already developed the best tunnel boring machine ever built, despite not coming from the industry. And it is not just a design, it has already built its prototype tunnel underneath the streets of Los Angeles connecting a nearby parking lot with the SpaceX headquarters.

And the big news is that it just won a $48.7 million contract to build a tunnel beneath the Las Vegas Convention Center. The tunnel was named the LVCC Loop.

Section of Tunnel From The Boring Company 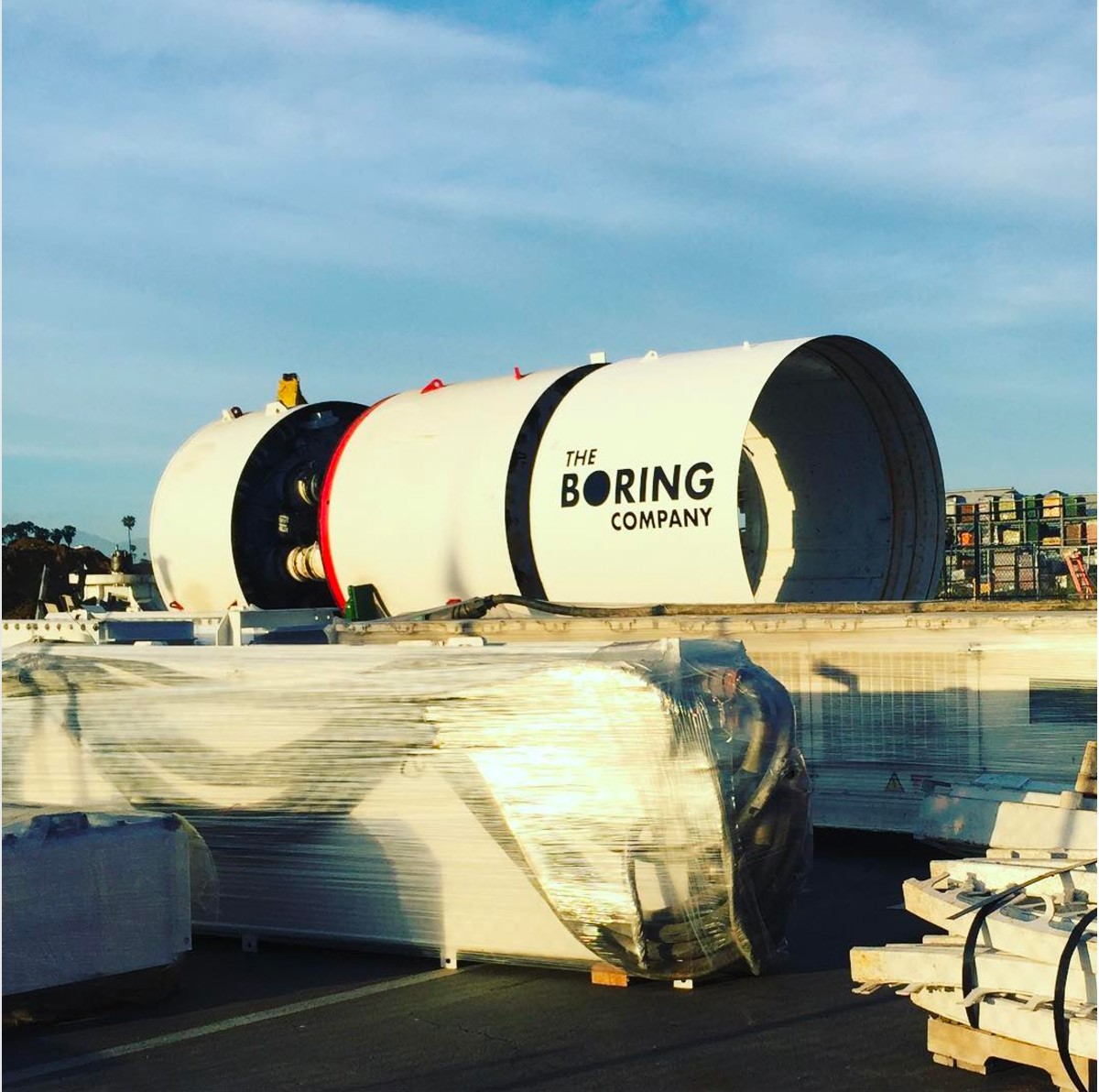 Why does the Las Vegas Convention Center want an underground tunnel?

Well, the building will be roughly two miles long after its current expansion is completed in 2021. That’s a lot of walking for event attendees who need to get from one side of the complex to the other.

And that’s where the tunnel comes in. They will be able to shuttle people to different points within the convention center quickly using underground transportation.

How’s that for bleeding edge?

The Boring Company expects to have the tunnel complete by the end of this year. At that point, they will explore expansion opportunities.

Talk about an exciting development. This vision represents what a modern city could look like.

And Las Vegas is a great place to start because it is a small city with a busy airport and lots of traffic. Shuttling travelers to various points in Las Vegas via the LVCC Loop would relieve much of the traffic congestion on the surface.

Our smartphones are about to get cheaper…

Back on April 25, I told readers that a long-running legal dispute between Qualcomm and Apple around licensing fees had been resolved. Qualcomm’s stock shot up 56% on the news… But I encouraged readers to steer clear.

And I’m glad I did. The stock has dropped 24% since our report. 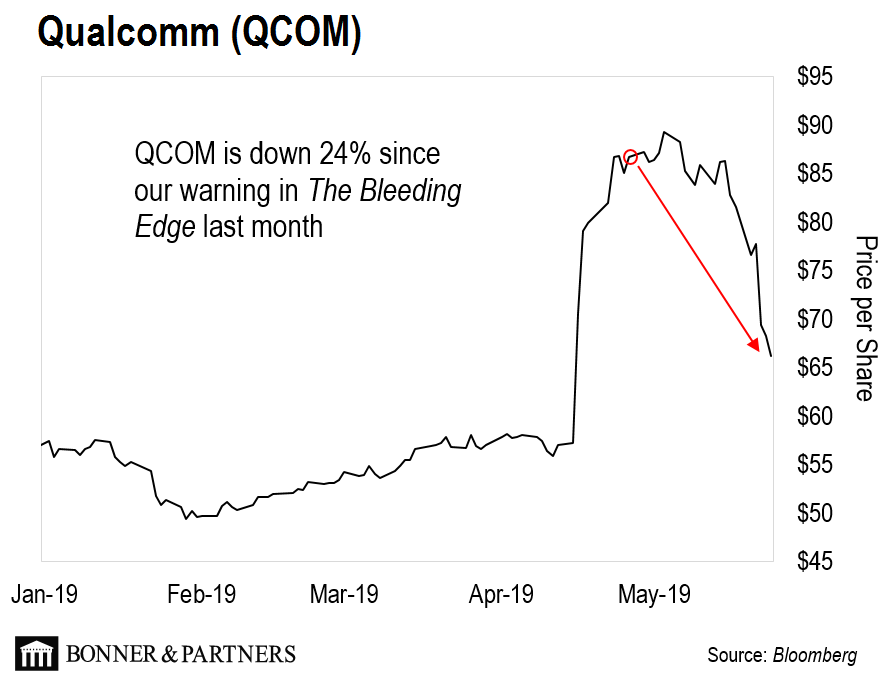 A U.S. judge just determined that Qualcomm has been violating anti-trust laws for decades now… This is big news.

It has been an industry secret since the 90s, but Qualcomm has gotten away with charging roughly a 5% licensing fee based on the average selling price of every mobile phone that’s been sold using 2G, 3G, 4G, or 5G technology…. Whether or not the phone contains Qualcomm semiconductors.

That’s right… Every phone manufacturer has had to pay about 5% to Qualcomm for each phone it sold. It is one of the most unique intellectual property licensing models in high tech, and one that every company wishes they had.

This came about because Qualcomm was the first to patent the wireless technology used in all mobile phones, CDMA. And they have collected license fees from every phone sold ever since.

When a manufacturer didn’t want to pay-up, Qualcomm threatened to cut off the supply of semiconductors. That would put the manufacturer at a major disadvantage because of Qualcomm’s advanced semiconductor technology. Qualcomm is always one of the first to come out with the latest bleeding edge technology.

But that’s what finally got the company in trouble. The judge ruled that this was an unfair business practice that forced the industry into one-sided agreements.

Further, the judge said that these were anticompetitive actions that hurt the market, Qualcomm’s competitors, and had a negative impact on consumers… Who have been footing the bill for more than two decades now.

Now, this is a huge deal because 40-50% of Qualcomm’s revenues have come from these licensing fees. It’s been their highest margin business for decades.

We don’t know yet how the judge will remediate this anti-trust violation. Certainly, Qualcomm will appeal and fight tooth and nail to maintain the status quo; but its days are numbered.

Its licensing policies are going to have to change, which will directly impact annual revenues and gross margins…negatively.

The stock has already dropped 25% since the ruling came out… And it’s going even lower.

Qualcomm develops fantastic technology and makes some of the best semiconductors in the world, but it no longer has the ability to apply the same licensing model that it has enjoyed for so long.

Hundreds of companies now contribute to wireless technology standards. Taking a percentage of the average selling price of a phone simply doesn’t make sense any longer, and the judge obviously agrees.

I cannot recommend going long Qualcomm when its underlying business model is completely at risk.

Even with the latest pullback in Qualcomm’s share price, it still carries a very healthy valuation of 25 times EBITDA. There is plenty of room to fall further.