Last weekend was September 11th, the 20th anniversary of the worst terrorist attack on American soil.

It reminds me how profoundly lucky we are to be alive. For me, it’s very personal.

I took a job at Cantor Fitzgerald in July 2001, and I trained at 1 World Trade Center (WTC) on the 104th floor. Every day, I took three separate elevators to arrive by 7:30 a.m. I was a kid in my twenties – wide-eyed and swimming in opportunity, like most of the people around me.

I was tasked with mastering our new order management system (OMS) and deploying it in Europe. I spent my days learning to trade, technology, and helping out wherever I could.

Each night, I’d hang with the guys on the desk – drinking, eating, and making friendships. That type of camaraderie (and even nepotism) was encouraged by the company.

When I was hired at Cantor, though, they’d asked if I preferred working in New York or London. I wanted London, but that presented problems with visas and moving. I was given the option to train in New York for six months before moving.

But I’d lost my lease at the time and simply said, “You choose. If it’s New York, it’s now. If it’s London, it’s now. Either way, let me know, and I’m there.” My boss (and soon-to-be brother-in-law) decided, “Come to London. We’ll figure it out.”

As a result of that decision, my WTC tenor was a brief month. On July 25, my fiancée, dog, and I began our London adventure. I said my goodbyes, certain I’d see my New York guys again on a future visit.

A few weeks later, my cartons arrived by boat from the States. The day I finally moved in, my seat in the WTC turned to ash along with my friends, colleagues, and many people I never knew at all.

Unknowingly, that decision had saved my life. I got incredibly lucky.

It’s important to have perspective. We talk of investing… and buying dips… and outlier stocks.

But before we dive into this week’s market analysis, I urge you all to take a moment and appreciate your own life and luck.

I’m Jason Bodner, the editor of Outlier Investor here at Brownstone Research. I spent much of my career on Wall Street. For nearly 20 years, I worked to make my Big Money clients as much money as possible.

But these days, I have a different mission – to help regular folks turn the tables and profit by catching on early to Big Money’s moves. I’ve had a firsthand seat to see how “outlier” stocks – the best companies that institutional players are piling into – can help investors profit big.

And for today’s essay, I want to give readers a lens on the markets as we near the final months of 2021.

But when we look at the final three months of the year, we get juice:

While there are no guarantees, we are set up to fly the last three months of the year. The movement we’re seeing in the Big Money Index (BMI) adds another layer to our analysis.

As a reminder, the BMI is my proprietary way of looking at money flows in the market. I take “Big Money” buy and sell signals, and I smooth them out over 25 days so I can track the trends of institutional buying and selling.

Here we can see that it’s been gaining upward momentum once more: 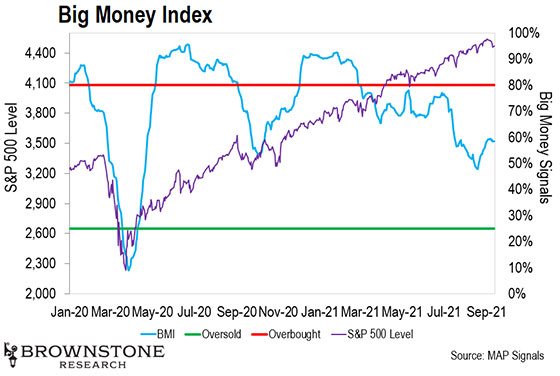 This is important because for the past few months, while the S&P 500 and Nasdaq were hitting highs, small caps were getting hurt. Now they’re improving, as hated groups – like Chinese ADRs, discretionary stocks, and smaller tech – are perking up.

Whenever selling slows and buying increases, stocks tend to rally.

We’re also seeing high-quality stocks with great earnings surging. This indicates quality is getting bought – which is refreshing after the waves of rotations that have frustrated the markets this year.

And recently, buying has been increasing. So if the BMI is lifting and we can see buying… then any September dips should be bought.

Below, we see the big BMI sell days over the last year highlighted. When selling has come, it’s been an opportunity to grab discounted stocks: 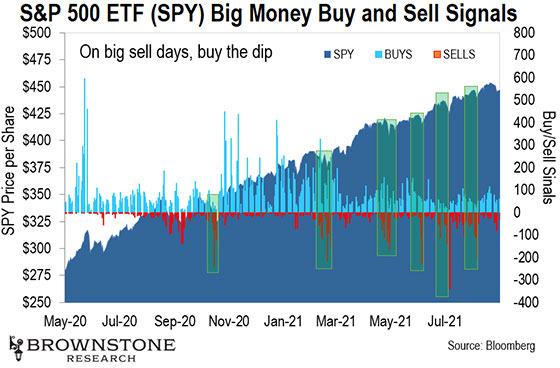 In other words, flowers bloom after the rain.

Next, let me break down the movement we’re seeing right now according to sector…

Right now, we’re seeing higher levels of buying in Communications, Energy, and Tech. Staples stocks, on the other hand, were sold. That’s bullish, as buying in that group is defensive.

What’s really important here, though, is that the back half of September is getting underway. Historically, for 30 years, the first two weeks of September were stronger than the last two. As we see here:

That really reinforces that we should expect a strong finish to the year – and take advantage of any bumps that might come our way near-term.

Our Setup Is Clear

So the setup is clear. Data is bullish with a rising BMI. The end of the year shows us a promising picture, so we should buy any dips in the coming weeks. In fact, history suggests that should things deteriorate and look ugly… that is precisely when we want to be brave.

Buying market dips can make for terrific gains. And in the end, I am highly confident stock prices will be higher in the coming years – and certainly in the coming decades.

A great way to take part in those potential gains is to invest in growth stocks through an ETF like iShares Russell 1000 Growth ETF (IWF).

While it’s heavily concentrated in household names like Apple, Facebook, Amazon, Microsoft, and Google, it’s also filled with other smaller, but terrific, growth stocks like the ones I focus on.

And if you’d like to learn how to profit from Big Money moves… and make even greater returns as a result… then Outlier Investor provides the best way to do so.

If you want to learn more about how my research service works, then simply go right here for the details.

Thank you, Jason, for giving helpful insight into how dark pools work and are used. I have known about them, but your explanation gave me more details than I have ever had given before.

Sometimes I do searches in the evening, but I think I will just get up earlier so that I have a more accurate count of volume from now on. Love following Big Money with you. Thanks!

Thanks for the kind words, Richard! I’m glad you enjoyed reading about dark pools in last Saturday’s essay. The wild world of Wall Street is a dark and complex web of tricks of the trade.

I won’t pretend to know them all, but a little clarity certainly helps the navigation of choppy waters when they come. I’ll try to continue sharing what I’ve observed from my own adventures. Thanks for writing in!