A few days ago, I was speaking to a wireless industry professional and the topic of 5G came up. As longtime readers know, the rollout of the 5G wireless networks is one of the biggest trends we’re following.

He thought it would be ready in about five years. He was shocked to learn that most of Manhattan is already covered with a live 5G network (T-Mobile), and that about 10 million 5G-enabled handsets will be sold this year alone.

They are so hyperfocused on one aspect of their industry that they lose sight of how quickly things are developing. That’s why “boots on the ground” research is so important. Maintaining objectivity and looking at things from multiple different angles are critical parts of understanding what is really happening… and, of course, how we can profit from these trends.

Yesterday, TSM estimated that 5G smartphone shipments will be around 300 million units in 2020. That’s a real number.

And here’s why the actual number will even be larger… Samsung will manufacture its own 5G semiconductor, and it is the largest smartphone manufacturer in the world.

5G networks are live around the world today, and a flood of smartphones will hit the market next year. By 2021, global 5G smartphone shipments will at least double the number from 2020.

TSM is literally running at full capacity in its most advanced manufacturing facility… And this is all being driven by 5G semiconductor demand.

And for investors, this flood of new 5G devices presents a once-in-a-decade opportunity. 99% of investors will miss it. But I’ve been preparing my readers with a concentrated portfolio of best-in-class 5G stocks. That includes my No. 1 5G stock to buy today.

If you haven’t had a chance to get all the details, then go right here. Just be sure you do it soon. As I showed you, the 5G rollout is picking up speed. The time to invest is right now. Click here.

Now, let’s turn to our insights…

Get ready for intelligent humanlike robots…

Research company OpenAI just showed the power of combining artificial intelligence (AI) with robotics. The company’s AI-powered robotic arm, named Dactyl, just solved a Rubik’s Cube by itself. And it did this in a matter of minutes. One-handed.

Dactyl With a Rubik’s Cube 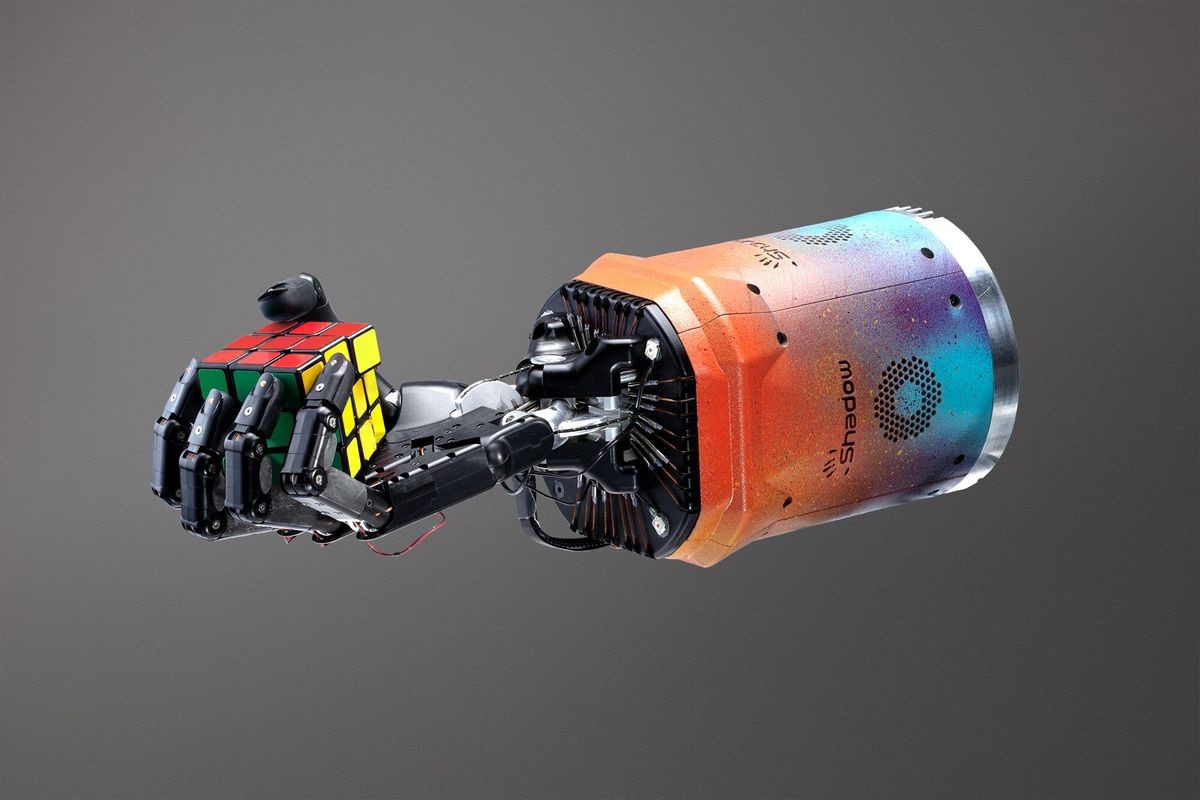 This is an incredible feat on several levels.

AI has already been used to quickly solve the Rubik’s Cube, as we have talked about before. But that was a computer simulation. This is the first time AI has enabled a robot to physically solve the puzzle.

As we know, the Rubik’s Cube is a simple device. But it has about 43 quintillion possible combinations. It’s an astronomical number of possible configurations. And there is only one solution. Simply solving the puzzle is a great feat in and of itself.

Even more impressive, OpenAI applied general-purpose AI to this problem. In other words, Dactyl wasn’t trained specifically to solve a Rubik’s Cube. Instead, it was given the endpoint: Make each side of the cube the same color.

Then Dactyl learned how to manipulate the cube and reach the solution through practice. That’s right… The artificial intelligence, with the help of its robotic arm, taught itself.

And here’s the best part… Dactyl learned to skillfully manipulate the Rubik’s Cube with its fingers. That’s exciting because the hand has been one of the biggest challenges in robotics. It’s hard to recreate those fine motor skills. After all, there are a lot of nuances with touch and feel.

For example, we handle soft, breakable objects much differently than firm objects. We know that an egg will break if we apply too much pressure. And we know if we apply too little pressure to a slippery object, we’ll drop it.

But how does a robot know these things? That’s been a hard problem to solve.

Well, OpenAI figured it out in a big way. It’s hard enough for a human to handle a Rubik’s Cube with just one hand. And for a robot to do this all by itself… it’s incredible.

This will lead to more integration of advanced AI and robotics. That’s going to be a big trend in 2020. And it is going to lead to useful robots that can perform functional tasks in society.

When we have robots that can think, infer, and physically manipulate objects, there’s no shortage of applications for them.

Virtually any routine task we need to be done, robots will be able to do for us… from delivering packages… to cleaning the house… walking the dog… and even cooking. That’s the power of combining general-purpose AI with robotics.

So we should get ready. Robot butlers await in our not so distant future.

South Korea is signaling the rise of autonomous vehicles…

I spent a large part of my professional career working in South Korea. I can say from firsthand experience that when this country sets a target to develop systems or infrastructure, it gets it done. It’s an incredibly industrious society. And South Koreans are fast to adopt new technologies.

For example, South Korea has widely deployed 5G already. It’s one of the most advanced countries for 5G infrastructure.

And South Koreans are adopting the technology quicker than any other country in the world. Three million 5G-enabled phones have already sold in the country. And that number could hit six million by the end of this year.

(South Korea may be ahead on 5G networks and 5G devices, but every major developed country in the world is rolling out 5G as I write this. For new readers looking to get exposure to this unstoppable trend, go right here.)

As further proof that the trend is ramping up in the country, South Korean carmaker Hyundai just unveiled a massive investment plan. The company will invest $35 billion in self-driving technology over the next five years.

So South Korea is dead set on catching up with the U.S. in the autonomous vehicle space. And I believe we will see more countries follow suit.

Once other world governments see the economic benefits of investing in autonomous technology, they’ll race to launch their own self-driving initiatives.

Yet another exciting application for CRISPR…

Research out of Yale University just came up with a way to use CRISPR as a complement to immuno-oncology drugs. This is a major breakthrough…

Immuno-oncology refers to therapies that leverage the body’s immune system to fight cancer. But the big problem that these therapies face is that some cancer cells evade detection. Obviously, if the therapy can’t find the cancer, it’s not going to work.

That’s where CRISPR can come in…

Researchers out of Yale (where I just graduated – it’s never too late to learn) used CRISPR to hunt down and flag cancerous cells. Rather than editing the cells, CRISPR was used to show where they are. This teaches the immune system how to identify the cancer cells. And that, in turn, allows immune-oncology therapies to be effective.

So far, researchers have proved this CRISPR application works in mice. The researchers will now team up with large pharmaceutical companies like Merck and Bristol-Myers Squibb to develop human-based therapies using this CRISPR technique.

And what’s great about this is that it can address any kind of cancer that has been resistant to immuno-oncology. That means it can be applied across a wide spectrum of therapies.

So once again, CRISPR has proven itself to be an incredible technology in the fight to eradicate human disease. When the world finally conquers cancer once and for all, I believe CRISPR technology will have played a critical role.

We’ll continue to track this story closely in these pages.

P.S. CRISPR also represents one of the best investment opportunities in the world of high technology. For paid-up subscribers of my small-cap technology investing service, Exponential Tech Investor, we have several CRISPR investments that are great buys today. Simply access our portfolio right here and review the research under “Precision Medicine.”