This has been a crazy, volatile market this year. As I’ve shared, it’s had an impact on many of the growth companies we talk about at Brownstone Research. Even strong, well-performing businesses have been punished in the pullback we’ve seen.

And inflation hasn’t helped the situation any. If we’re not getting returns above 9%, we’re losing purchasing power… That means many of us are stuck in a difficult situation. How can we find returns while managing our risk?

There is one way I know of that limits our downside, and still allows us to keep growing our portfolios ahead of inflation – even if market volatility persists.

It might sound too good to be true. But it’s the same strategy Silicon Valley insiders and the uber-wealthy use with their own money.

It’s also how I’ve built my family’s security and ensured they’ll be taken care of for the rest of their lives.

I’m talking about private investments. I’ve invested in over 300 deals in my own portfolios… and I’ve been working hard to help bring high-quality deals to my subscribers as well.

In fact, we’ve already taken part in 10 exciting private deals in the past year. But we’re not stopping there…

We’ve got another big recommendation coming up soon… and I want everyone to have the chance for this incredible opportunity.

That’s why I’m hosting a “Private Deal Room” next Wednesday night. On July 27, I’ll share how we can use private investments to protect and grow our wealth…

I’d like to invite all Bleeding Edge readers to attend. In my “Private Deal Room,” all investors are welcome, accredited and non-accredited.

In fact, every one of the private deals that I have recommended to date has been open to all investors. The same is true for my next recommendation – And this next opportunity is big, and it’s unlike anything I’ve recommended before.

So please go right here and RSVP for my “Private Deal Room” to secure your spot.

The Fusion Industry Association (FIA) just published a report on the overall nuclear fusion industry. And there are some key insights that we can glean from the data that came out.

As a reminder, nuclear fusion is essentially the power of the Sun. It involves taking two separate nuclei and merging them to form a new nucleus. A fusion reactor contains these reactions in a hot plasma with no risk of any kind of meltdown, and the net result is an energy production system that is capable of producing more energy than is required to maintain the reaction.

This technology is our best chance at getting to the point where our baseload power is generated by 100% clean energy.

And what immediately caught my eye in the industry report is just how much investment is happening right now. 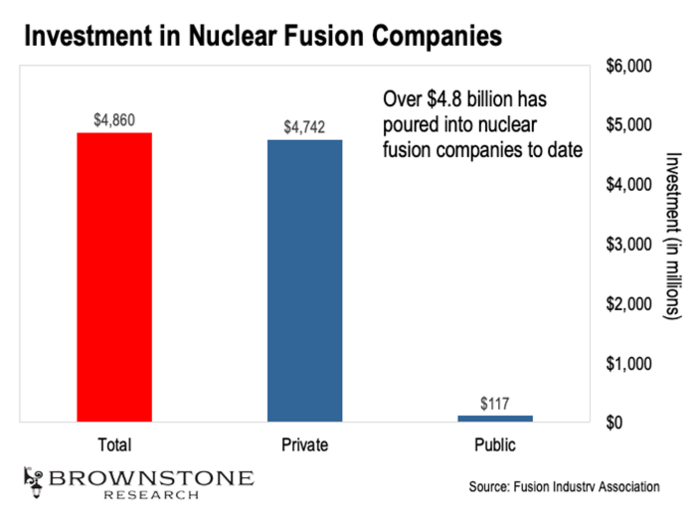 As we can see, over $4.8 billion has poured into nuclear fusion companies. And $2.8 billion of that has come just in the last 12 months. Clearly, things are heating up.

Also interesting is that this is almost entirely private capital. Less than 3% of all funding has come from government grants.

A narrative out there says the government isn’t supporting nuclear fusion development, and therefore the technology will never take off. And the first part is certainly true.

But we are seeing massive levels of private investment right now, despite the government’s current lack of interest and support of baseload clean energy production. The industry, and its backers, are determined to make fusion a reality – with or without government support. That’s very encouraging.

The FIA also published a graph that gives us a feel for industry activity over the last three decades. Check this out: 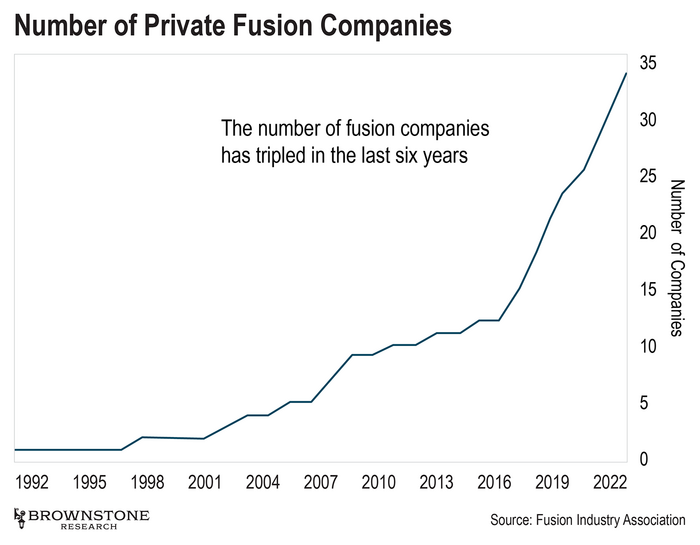 Whenever we see this dynamic, it’s a clear sign that engineers and scientists are on to something. It’s a breakout moment that indicates a clear path toward commercialization. That’s why investment levels have increased so dramatically over the last few years.

And that means the race is on.

That said, the government could certainly speed development along if it passed something similar to the CHIPS Act. We talked about that on Monday.

The CHIPS Act is a $52 billion program designed to provide incentives to the semiconductor industry to increase the manufacturing base in the U.S. If the government were serious about 100% clean, sustainable energy to feed our power grids that feed our factories, offices, stores, and homes, a program similar to this would be in place.

And after that, the next push will be toward commercialization. This is all happening within this decade.

Meta (formerly Facebook) just made a move that brings it closer to having a full-scale augmented reality (AR) eyewear product.

And unlike Magic Leap, which pivoted towards enterprise applications, Meta is 100% focused on the consumer market.

Meta just upgraded its Ray-Ban smart glasses to support hands-free calls and texting within its WhatsApp messaging platform. This is something I’ve predicted we would see for some time now.

For the sake of new readers, Meta’s smart glasses are the product of its partnership with Ray-Ban, one of the world’s largest sunglasses manufacturers. Here they are: 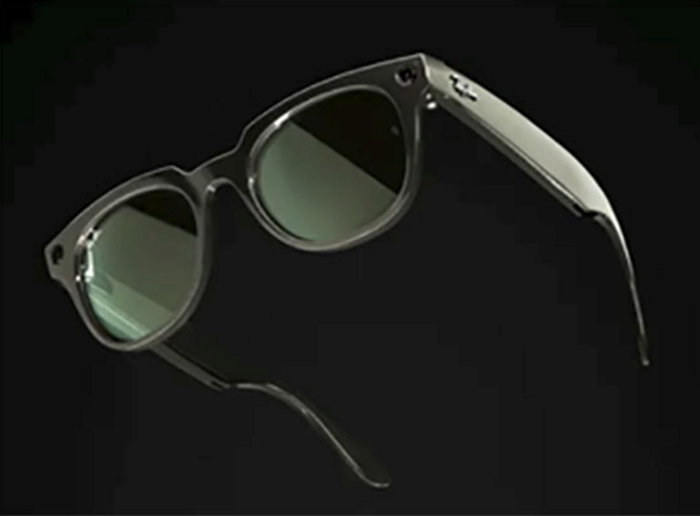 At launch, these glasses allowed wearers to take pictures and very short videos. The glasses would then upload them to Facebook and Instagram.

With the new upgrade, the glasses will read WhatsApp messages aloud to the wearer. And they will allow them to send return messages using voice commands. The glasses support phone calls as well.

So now they are functional for communications. This is an incremental move towards full AR.

I’m on the record saying that AR eyewear will eventually replace the smartphone. This is the next mass-market user interface.

And the tech will be adopted widely once the glasses can do everything a smartphone can do for us, except it will be hands-free. No more looking down at the screen or punching buttons.

Well, Meta is moving closer and closer to that point. I’m very interested to see how the Ray-Ban glasses will be adopted. That’s something I’ll be watching closely.

And bigger picture, we can look forward to the launch of Apple’s much anticipated AR product soon, perhaps in September. It’s going to be a game changer.

We’ll wrap up today with another great example of the “Great Recalibration” trend we’ve been tracking – the trend of re-shoring of manufacturing back to where the products are bought and consumed. The goal is to build more resilient supply chains.

Japanese conglomerate Panasonic just announced that it is building a $4 billion battery factory just outside of Topeka, Kansas. The company expects this to create about 4,000 jobs in the area.

Panasonic has been one of Tesla’s key electric vehicle (EV) battery suppliers for years. Historically, Panasonic has located its factories close to Tesla’s facilities for this reason.

But that’s not the case here.

This new factory will be a standalone facility. It isn’t a partnership with Tesla similar to what it is doing in Nevada – This is a wholly owned Panasonic factory that will service both Tesla and Toyota, and potentially other automotive manufacturers as well.

So this is a very exciting development – both for the Great Recalibration and for the EV industry.

As we know, batteries are the most critical component in EV manufacturing. And most carmakers have failed to secure enough battery supply to meet their EV production goals.

Clearly, that’s not the case for Tesla and Toyota, the two big giants in EVs.

Panasonic’s Kansas-based factory is a huge win for both of these companies. And it will give each of them a leg up in the EV industry for years to come.