Tomorrow night at 8 p.m. ET, please tune in for my special 5G investment summit, The Final Phase of the 5G Boom. You’ll have the chance to find out my investment plan for the build-out of this next-generation wireless technology. Investors who get in now stand to make 10 times their money… or more.

I’ll talk about how to choose the best small-cap 5G stocks – and share the No. 1 stock that’s caught my eye and earned a place on my watchlist.

Go here to reserve your place.

And now on to today’s tech stories…

The rise of Amazon as a logistics powerhouse…

Amazon is now the largest third-party logistics company in the world. That’s right… The company that started as a quirky little online bookstore now has a bigger logistical network than both UPS and FedEx.

And Amazon’s growth happened fast. It snuck up on the industry. 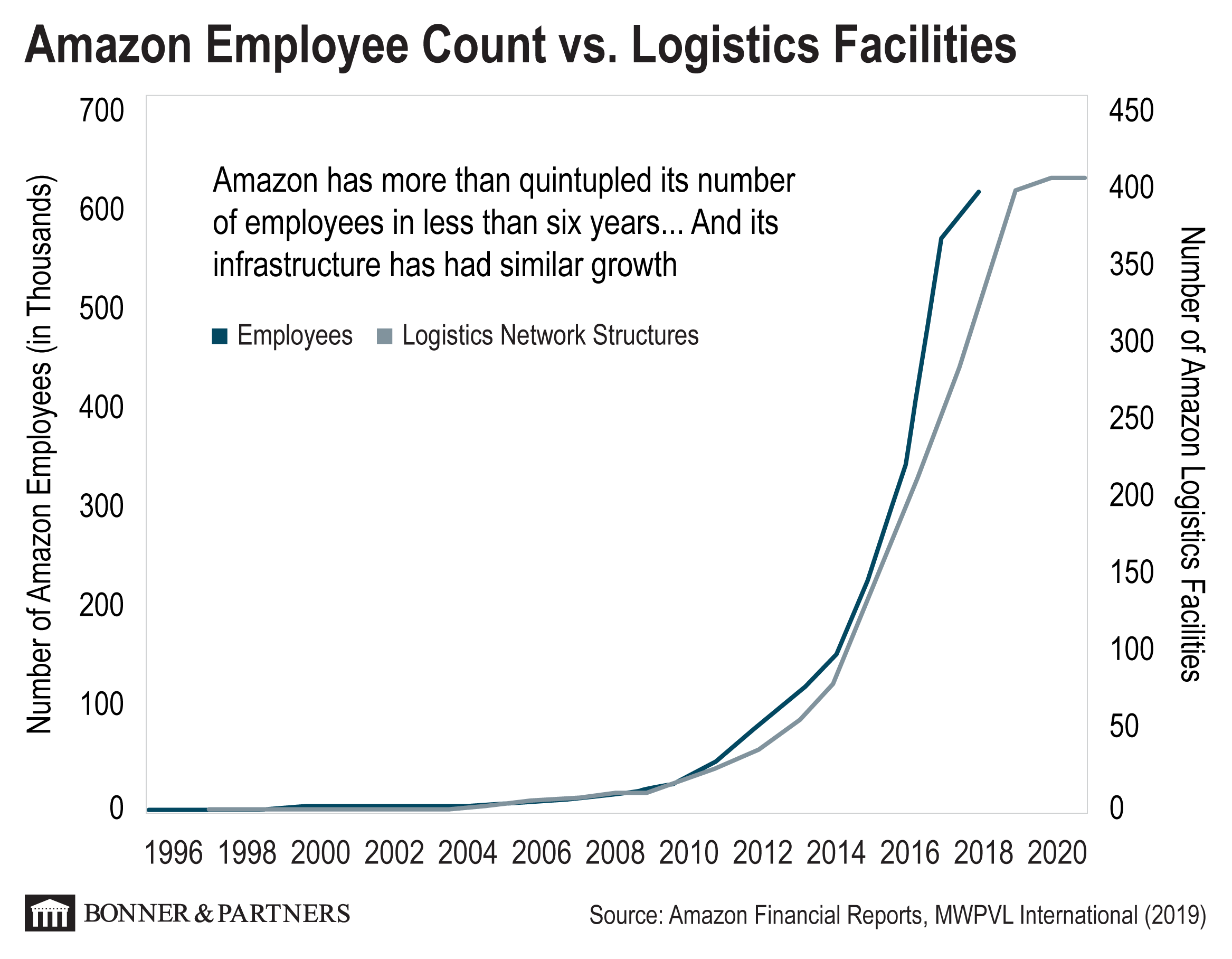 If we look back to 2013, Amazon only had 117,000 employees. That means Amazon’s employee count more than quintupled in size in less than six years.

And Amazon has the logistical infrastructure to match its employee base. The company has 390 warehouses… 20,000 delivery vans… 300 truck power units… and 50 planes.

As a result, Amazon now handles as much as 45% of its own deliveries. Amazon parses out the rest to UPS, FedEx, and the USPS.

My prediction is that Amazon will soon handle more than half of all its own deliveries… before the end of this year.

And I expect it will even begin to deliver packages for orders not purchased on Amazon.com.

We already know that it intends to enter the home delivery market for prescription medicine through its acquisition of online pharmacy PillPack last year.

We talked about this back in July. Amazon is undercutting the legal drug “Triad” – Express Scripts, CVS, and Optum. Amazon will soon deliver medications right to your door within 24 hours.

Amazon has become a logistics giant…. perhaps the most efficient one as well. After all, it doesn’t have any of the legacy issues of UPS or FedEx, and it employs artificial intelligence to optimize its network.

The industry is taking notice. In fact, FedEx announced that it will terminate its contract with Amazon for U.S. air package deliveries back in June. And FedEx will also stop ground deliveries for Amazon at the end of this month. That tells us that FedEx now sees Amazon as a major competitor.

This is a dangerous move for FedEx.

For one, it’s going to lose business. But this will also force Amazon to accelerate the expansion of its own network, making it even more of a threat to FedEx.

Amazon’s solution will be to add more planes and more delivery vans. And that will put Amazon in a position to take future business away from FedEx and UPS.

In the end, I’m bullish on Amazon… and bearish on FedEx and UPS.

Social media company Snap just announced the third generation of its Spectacles glasses. These are referred to as augmented reality (AR) glasses… But they are not really AR. They’re for taking pictures and videos.

What’s unique about this version is that the glasses are fashion conscious. They have a similar look and feel to a normal pair of sunglasses.

Previous versions were big and bulky and made of colorful plastic. The new Spectacles 3 look like futuristic eyewear. And they are shaped like sunglasses… They’re just a little thicker in the temples to house the semiconductors and battery. 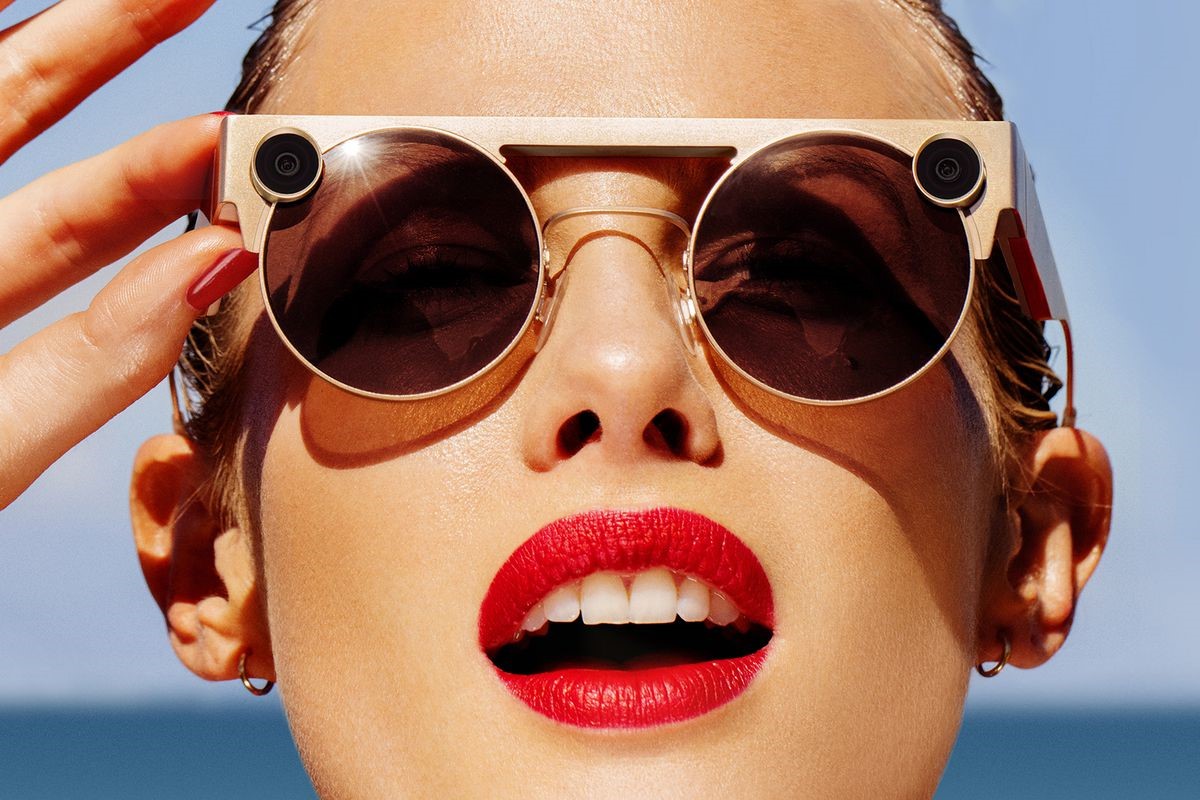 This version of Snap’s glasses comes with two high-definition cameras. They are to the right and left of the lenses. This enables depth perception. These glasses can take extremely high-resolution pictures and videos.

That’s largely what these glasses are for. They aren’t true AR glasses. They are an innovative experiment with a different interface to capture life… primarily for the purpose of interacting with social media.

So I don’t expect this version of Spectacles to be terribly successful. But I do think they are a view of the future.

These glasses have everything you need for AR except advanced lens technology. That leads me to believe that these are just a precursor. I suspect Snap’s fourth-generation Spectacles will be full-blown augmented reality glasses. Snap is learning a lot as it iterates through its design process. That’s a smart move by Snap.

And, of course, I believe AR will be the next mass-market consumer frenzy. You can expect to hear a lot more about this trend later in the year.

Apple is ramping up to compete with Netflix…

We just got the news that Apple is investing $6 billion in producing content for its Apple TV+ business. This is Apple’s TV and movie streaming service that’s set to launch later this year. And given the high level of investment, Apple clearly plans to compete with Netflix.

It’s about time Apple arrived in this area.

The company had brilliant success with its App Store. Apple was the first to make CDs obsolete at scale with iTunes. iTunes revolutionized the way the industry distributed music. And it had a great launch with its Apple Music streaming service even though it was years late.

But Apple completely missed the bundled video streaming business model entirely. This is a surprise considering the success of iTunes in distributing TV shows and movies.

And that’s why Netflix quickly became the dominant player in streaming… Apple was nowhere to be seen.

However, that’s about to change. Apple’s big investment in Apple TV+ shows us that it is committed to launching a competitive service. In fact, Apple is developing a TV show featuring Jennifer Aniston, Reese Witherspoon, and Steve Carell. Talk about star power.

And according to insiders, Apple is spending more per episode on this show than HBO spent on Game of Thrones, which cost $15 million per episode in its final season. Whenever a player is throwing around money like that, it will sign up big names, which will draw views to the platform.

So this is a great move for Apple. The company is sitting on $210 billion in cash… Investing $6 billion of it into Apple TV+ is a great use.

With that sort of investment, Apple has the potential to compete with Netflix at its own game, just like it did with Spotify in the United States.

And I expect that Apple will be spending in excess of $10 billion a year on programming and content in pretty short order. This will provide even more choices for consumers to “cut the cord” from cable TV companies that refuse to unbundle and offer some of the worst customer service known to society.

P.S. As readers may know, Phase 3 of the 5G boom is about to kick off. That’s why I’m hosting my 5G investment summit tomorrow night at 8 p.m. ET.

During the event, I’ll show you how I go about picking the most explosive 5G stocks. I’ll go over how investors should be positioned for the 5G build-out. And I am going to give you the name of my top 5G watchlist company. No strings attached, as always.

As I have said before, anytime you have a world-changing tech, you also have a life-changing investment opportunity. That’s what this investment summit is all about. I firmly believe investors stand to make 10 times their money on a handful of small-cap 5G stocks over the next several years… But only if they know what to look for.

As a reader who joins me at The Bleeding Edge each day, I want to make sure you have access to this information. I can’t tell you how much of a joy it is to wake up every morning to write about the exciting world of tech… And I only get to do that because of you.

So please join me tomorrow night as well. We’ll go live at 8 p.m. ET. And I’ll fill you in on what I think is coming as we enter the final phase of the 5G boom. You can reserve your spot right here.