Why Apple is going to Seattle…

News leaked out that Apple (AAPL) plans to establish a new campus in Seattle… just a few blocks away from Amazon’s (AMZN) headquarters.

Considering that Apple’s headquarters is in Silicon Valley and the company is known for being highly centralized, we may ask… Why does it want to establish a new campus so close to Amazon’s headquarters in Seattle?

And the answer is, it’s all about artificial intelligence (AI).

This move is a silent admission that Apple is behind on AI and voice assistance technology. Simply put, Apple’s virtual assistant Siri continues to lag in performance compared to Amazon’s Alexa or Google Assistant. The three were about even five years ago… But Apple has struggled to keep up.

To be blunt, AI is the one massive weakness at Apple. It has focused on smartphones, laptops, the App Store, and streaming audio services. But it missed the boat on AI… which is the most important tech trend today.

So Apple’s move to Seattle is strategic. With Amazon and the University of Washington (UW), Seattle has become the world’s hub for AI applied to voice assistance technology. And UW is one of the leading research centers in the world for artificial intelligence and machine learning. Its prominence has been largely enabled by grants made by the late cofounder of Microsoft, Paul Allen.

Apple is going to Seattle to attract top talent in AI. It wants to hire as many Amazon employees and UW graduates as it can. In fact, the plan is to hire 2,000 people to work at its Seattle campus.

And what better way to poach top talent than to offer them more money to work just one block away? No relocation is necessary.

I think this is a great move. Apple is a great company. It produces top-notch products. And it has a stellar track record when it comes to protecting user data.

Strong AI for its voice assistance technology – and future plans for autonomous driving technology – is absolutely critical for Apple’s future. Otherwise, the company will be quickly left behind.

And I believe there’s one other voice controlled, AI-enabled product that Apple has been secretly working on behind the scenes… augmented reality (AR) eyewear. This strategic move in Seattle isn’t just about Siri on an iPhone… it’s about the next multibillion-unit consumer electronics product: AR.

The rise of industrial augmented reality…

I have said many times that augmented reality will be the next mass-market consumer frenzy. I’ve even gone so far as to say that AR headsets will replace the smartphone.

It’s easy to get excited about consumer-focused AR. It’s fun… It’s dynamic… The glasses are futuristic. And I expect consumer AR to be a huge hit this holiday season. We’ll see several new versions of consumer-grade AR headsets come out.

But we shouldn’t overlook enterprise AR. This is AR that companies use for specific tasks in a work environment. It’s used to boost productivity and improve safety. Things like overlaying a repair manual on an engine to help with repairs… or displaying a safety checklist in real time to ensure all items are checked.

This type of AR is already here. It’s hot right now. And a brand-new industrial AR company caught my eye this week…

RealWear, a company that’s been operating for 18 months, just pulled in $80 million in a Series B venture capital (VC) round. This is a huge fundraising round given how new the company is.

RealWear isn’t a development-stage company. It has already shipped 15,000 AR headsets to 1,300 enterprise customers since its founding. 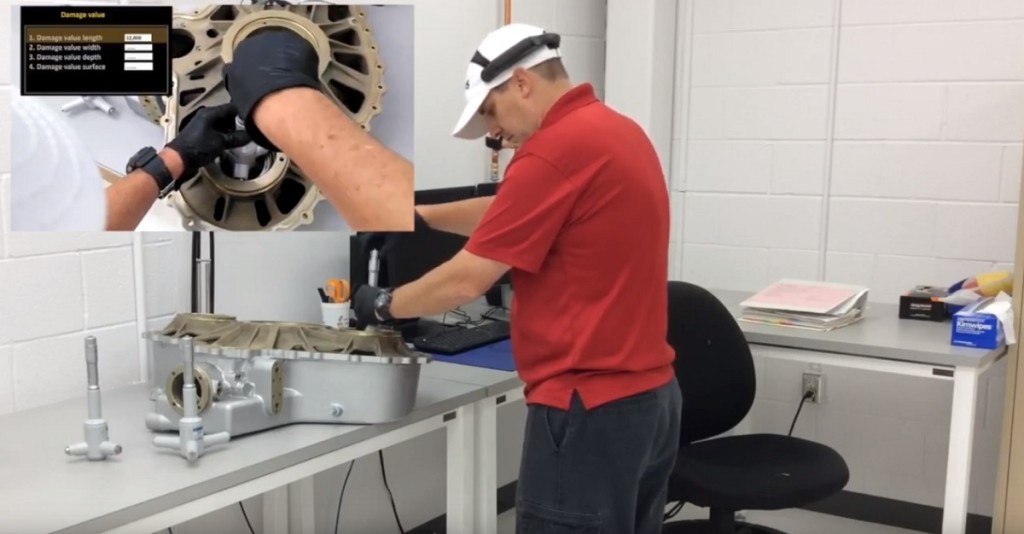 And that’s just scratching the surface of the total market size. It’s projected that 7.6 million AR headsets will sell this year. That’s up from just 5.9 million headsets last year… a 29% jump in sales.

But the other thing that caught my eye is who its Series B investors were… They weren’t VC firms. Instead, the investors were a wide array of businesses.

And get this, even JPMorgan Chase invested. Now that’s a head-scratcher. To be blunt, it doesn’t know much about tech or venture investing. My guess is that it wants to be the underwriter for a future IPO.

But the fact that these varied businesses invested in RealWear tells me the applications for industrial AR are widespread. AR will be practical for many industries. And this kind of corporate investment is a demonstration of how practical the technology is in an enterprise setting.

To be clear, RealWear is not a company I expect to go public soon. It’s still too early. But this is definitely a company to watch going forward.

Don’t be a phishing victim…

Google just put out a transparency report on cyberattacks… And it shows a major shift over the last 10 years.

Hackers used to try to get people to download malware. They would get consumers to download free software from a website… But the download would also install malware. Then the hackers could steal personal information.

Well, that’s changed since the world’s gone mobile. Today, most people access software through their phone’s app store. Those apps are safe because Apple and Google check them for malware before making them available. That’s eliminated most malware.

But phishing is on the rise. Phishing attacks try to trick people into giving away account information or sensitive personal information. This is done through websites and email.

According to the Google report, phishing sites have increased by 569% in the past 10 years. These are fake websites that mimic a real company’s site. They try to trick consumers into typing their username and password. Here’s an example: 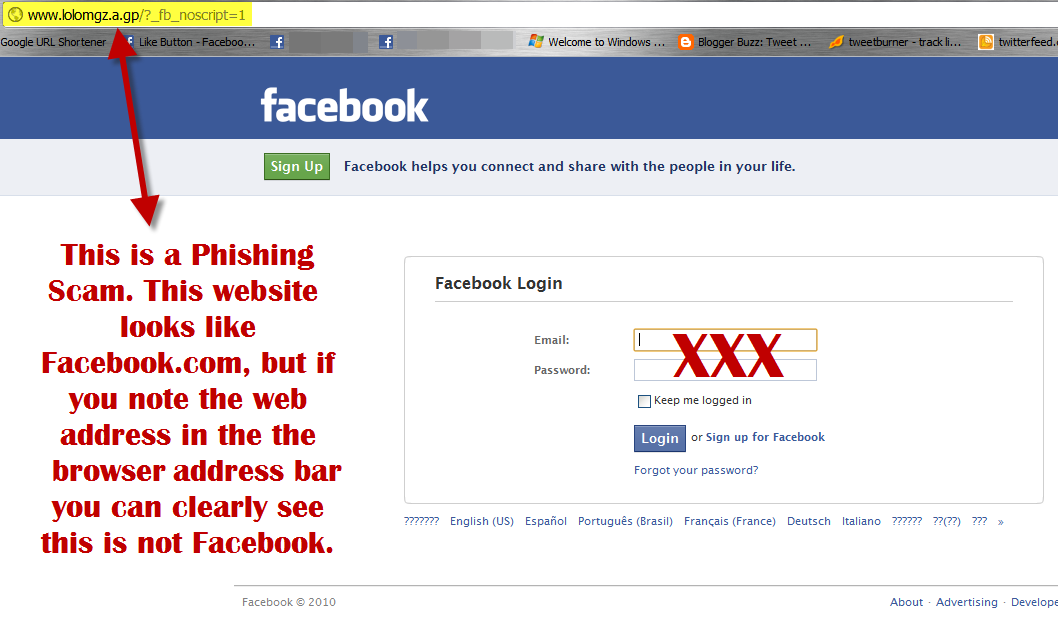 This phishing site mimics Facebook. But if you look at the URL (highlighted in yellow), it’s clearly not Facebook.

And here’s a phishing email:

Example of a Phishing Email 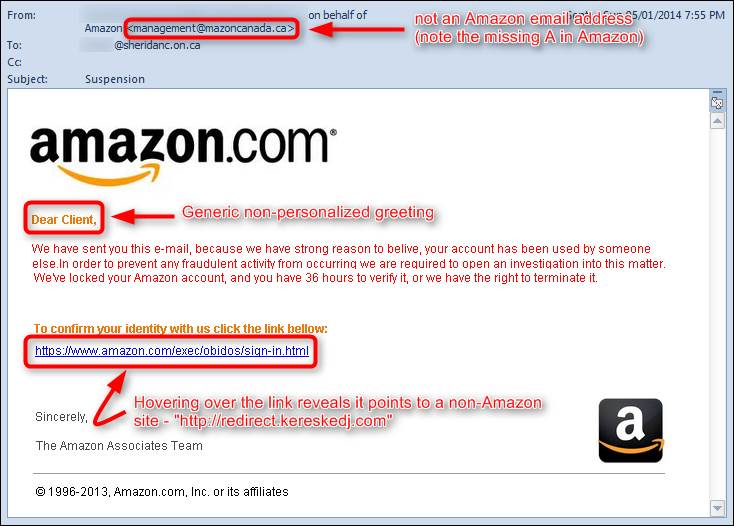 This email looks like it came from Amazon. And it’s compelling. It tells you to verify your account or it will shut it down.

But if you look at the sender’s email address… It’s not a real Amazon address. That’s a dead giveaway that this is a phishing email.

Then, if you hover over the link, you’ll see it doesn’t actually take you to Amazon. It takes you to some weird site called “kereskedj.” That’s another sign that this is a phishing attack.

So please investigate your emails. And never click on a link in an email from someone you don’t know or for something you haven’t asked for. That link will either install malware on your computer or take you to a phishing site.