Before we get to our tech insights, I want to wish American readers a very happy Independence Day! I never realized how much I missed the 4th of July when I was living and working internationally for so many years.

And yes, we are bringing you an original issue of The Bleeding Edge today. When we launched The Bleeding Edge, I committed to write to you every week day no matter what … And I was happy to work a few hours this morning to get today’s insights out to you.

As for this afternoon, I will celebrate the holiday with my family. It’s hard to beat grilling outside on a beautiful summer day.

So, I hope you have a wonderful holiday with whatever you do.

Blockchain analysis company Chainalysis just reported that $1 billion worth of bitcoins will be spent on the dark web this year for illicit purposes.

The dark web is a hidden part of the Internet that you can’t get to with normal web browsers. You need specific software to find it. And as you likely know, the dark web includes online markets for drugs and other illicit goods.

So, $1 billion in bitcoins will be spent on illicit goods this year. That will surpass the previous high of $872 million in 2017… Which corresponded with Bitcoin’s run up to $20k in price.

But guess what? $1 billion in a year is next to nothing in the big picture.

There’s a widespread perception that bitcoin is primarily used for illicit purposes. But nothing could be further from the truth.

For one, nearly $30 billion worth of bitcoins traded on legal digital asset exchanges yesterday alone. And remember, these exchanges verify the identity of all users. So, that’s 30 times more legal bitcoin activity in a single day.

Those transactions are in fiat currency… With U.S. dollars making up the biggest portion.

Simply put, bitcoin isn’t here to make illegal transactions easier…. In fact, it has no chance of overtaking fiat currencies. Why? Because every transaction is traceable. Every transaction for every bitcoin becomes part of an immutable record on the bitcoin blockchain.

That’s why the U.S. dollar, and other fiat currencies, are so popular for the underworld. These fiat currencies are not traceable. Every transaction can take place by hand, or by the clever technique of transferring funds through legitimate, or not so legitimate, corporations.

Somewhat ironically, blockchain technology is actually being used to reduce the potential for crime and illegal transactions. The industry is using the technology to remove friction, eliminate fraud, verify identity, lower costs, and make it very difficult for bad actors to lie, cheat, and steal.

Last week, the U.S. House of Representatives approved $5 million in funding for the Great Lakes Hyperloop. This is a high-speed transportation system developed by Hyperloop Transportation Technologies.

The system consists of tubes through which high-speed trains can travel using electromagnetic propulsion. This will enable trains to reach up to 700 miles per hour.

At that speed, the Great Lakes Hyperloop will shuttle passengers from Cleveland to Chicago in just 28 minutes.

That’s 246 miles in 28 minutes… how incredible is that? It would take over five hours to make that drive in a car. 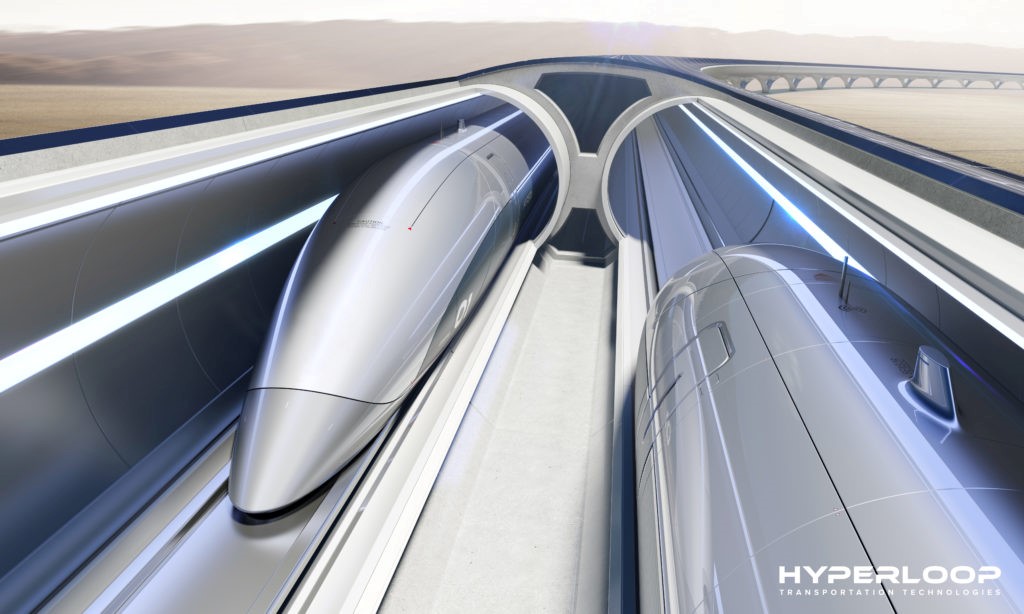 And think about this… With the hyperloop, Cleveland residents could work in Chicago with an easy daily commute. That opens up a wealth of new opportunities.

And the Great Lakes Hyperloop isn’t the first of such projects being explored in the United States… there are many more being discussed.

Imagine commuting from Boston to Washington DC in 38 minutes… Or Los Angeles to San Francisco in 45 minutes… Or Kansas City to Dallas in an hour.

We are talking about a transportation renaissance in America.

That means AT&T, Verizon, and T-Mobile each have 5G networks up and running in the U.S. And they are adding more and more 5G infrastructure every week. Coverage is expanding rapidly.

What’s more, T-Mobile just agreed to divest Boost Mobile… which gets them a step closer to merging with Sprint. That was one of the Department of Justice’s requirements to approve the merger.

And of course, a T-Mobile/Sprint merger would be huge for 5G. Neither company can build a nation-wide network on its own. The two need to combine spectrum and finances to get that done… And it looks like they will.

So, 5G is here now. And three wireless carriers in the U.S. are racing to build out their networks as quickly as possible. Think about it, it is a major competitive advantage to be first to market with this revolutionary wireless technology.

U.K. network operator EE launched 5G last month. And rival Vodaphone just launched their 5G network in the U.K. this week. Vodaphone was just a month behind the EE launch.

So, two network operations now have 5G networks up and running in the U.K. as well. And we will see new 5G announcements come out every week, around the world, for at least the next three years. As regular readers know, this is a major investment area of focus in both my research publications, The Near Future Report and Exponential Tech Investor.

P.S. Investing alongside the 5G rollout is one of those rare, “once in a decade” opportunities. It lets everyday investors profit from a revolutionary piece of technology right before it hits the mainstream. And as I just showed you, we’re hitting a critical juncture.

With 5G going live in city after city, now is the time to get exposure. If you wait too long, the 5G networks will be complete, and the best opportunity for the highest returns will be gone. Go right here to learn about my #1 5G recommendation.