Before we get to today’s edition of The Bleeding Edge, I just wanted to remind you about an important event.

Tomorrow at 8 p.m. ET, I’m hosting a free webinar from technology investors. We’re calling it the Accelerated Profits Summit. For the past five years, I’ve been perfecting a system to make fast, repeatable gains in a technology subsector that few pay attention to.

If you’re a reader of either of my investing services, The Near Future Report or Exponential Tech Investor, then this event is a must-attend. I suspect it could be one of the biggest breakthroughs of my career as a technology analyst.

You don’t have to take my word for it. Just tune in tomorrow night, and I’ll put my cards on the table. Go right here to save your spot.

One of the most important things we do in our research is getting out in the field. We don’t sit behind computer screens all day… We put boots on the ground. We go to conferences. We listen to presentations. We talk to executives, product managers, engineers, scientists, distributors, and so on. And when we can, we get our hands on the tech and test it.

That’s one of the best ways to gain insights… in the real world, not from a comfortable chair in front of a computer screen. The most valuable information requires time, money, and effort to obtain.

That’s the key to making informed, smart, and timely investment recommendations. And today, I want to show you that 5G is here. And it’s lightning fast…

This demonstration comes to you from the Minneapolis area, where early 5G services are live. One of my analysts, Nick Rokke, visited the Mall of America to get a firsthand look. And as you can see, download speeds eclipsed 700 megabits per second (Mbps). The peak speed was 717 Mbps.

For comparison, the average download speed on 4G networks in the U.S. is around 16 Mbps.

That means that this early demonstration of 5G in Minneapolis is over 40 times faster than the average 4G in the U.S. already…

And keep in mind, the 5G network isn’t fully built out yet. Download speeds will likely reach up to 10 gigabits per second (Gbps) once the network is complete. As we can see, this is not a speculation, it’s the real thing.

This is why I have been pounding the table on 5G for two years now. The technology is revolutionary compared to its predecessor. It will enable businesses that don’t even exist today.

The latest on Apple’s 5G phone…

We just got big news regarding Apple’s coming 5G phone…

It is now confirmed that Apple will launch its 5G phone during the third quarter of 2020. That’s no surprise. But get this… These phones will be powered by 5 nanometer (nm) semiconductors.

That’s half of the big news. These 5 nm chips will be the most advanced semiconductor manufacturing technology on the planet. (Currently, that title goes to 7 nm.) And Apple will be the first to use them for consumer products.

That will make Apple’s 5G phones the most advanced smartphones on the market next year.

The other big news is that Apple will use advanced 3D sensors in its 5G phones.

It is already using the 3D sensors for facial recognition and early forms of augmented reality, but the 5G-enabled phones will put the most advanced 3D-sensing technology on the rear side of the phone. That’s the “world-facing” side that the phone “looks at” when we hold it up to take a picture. In other words, it is a lens that will be used for augmented reality (AR).

I saw some news from journalists last week that Apple was walking away from AR. Quite the opposite is happening. Apple is doubling down on AR, and it has both the patents and the hardware to prove it.

Remember, AR is an interactive experience where your real-world environment is “augmented” by computer-generated content.

In this case, the iPhone’s 3D sensors will map the user’s surroundings… And AR applications will overlay content. In other words, users will see the computer-generated content within the context of their surroundings.

AR has countless real-world applications… from gaming.… to GPS navigation… to interior design… to construction and repair… People will use AR in many useful ways.

And, of course, this jump into AR goes hand in hand with 5G. The high speeds and low latency of 5G are what makes next-generation AR applications possible.

And Apple’s new 5G phone will be a grand showcase for the technology.

[The 5G trend is unstoppable. And it’s not just Apple launching 5G-enabled phones. Billions of 5G devices will hit the market in the months and years ahead. And every single one of them will need a specific component to function properly. That’s why the company that produces this component is my No. 1 5G stock of 2019. More here.]

On Friday, I answered a great question about the “wrong way” to invest in an IPO. Here’s an excellent example of what I meant…

WeWork is one of the world’s largest providers of modern shared workspaces. The company leases office space to start-ups, small businesses, individual consultants, and remote workers.

What’s unique is that the focus is less on work and more on social interaction. These workspaces foster a “community-like” environment… And they even provide free beer.

I hope some of you are laughing right now – this can’t possibly be a good environment for high productivity, right? 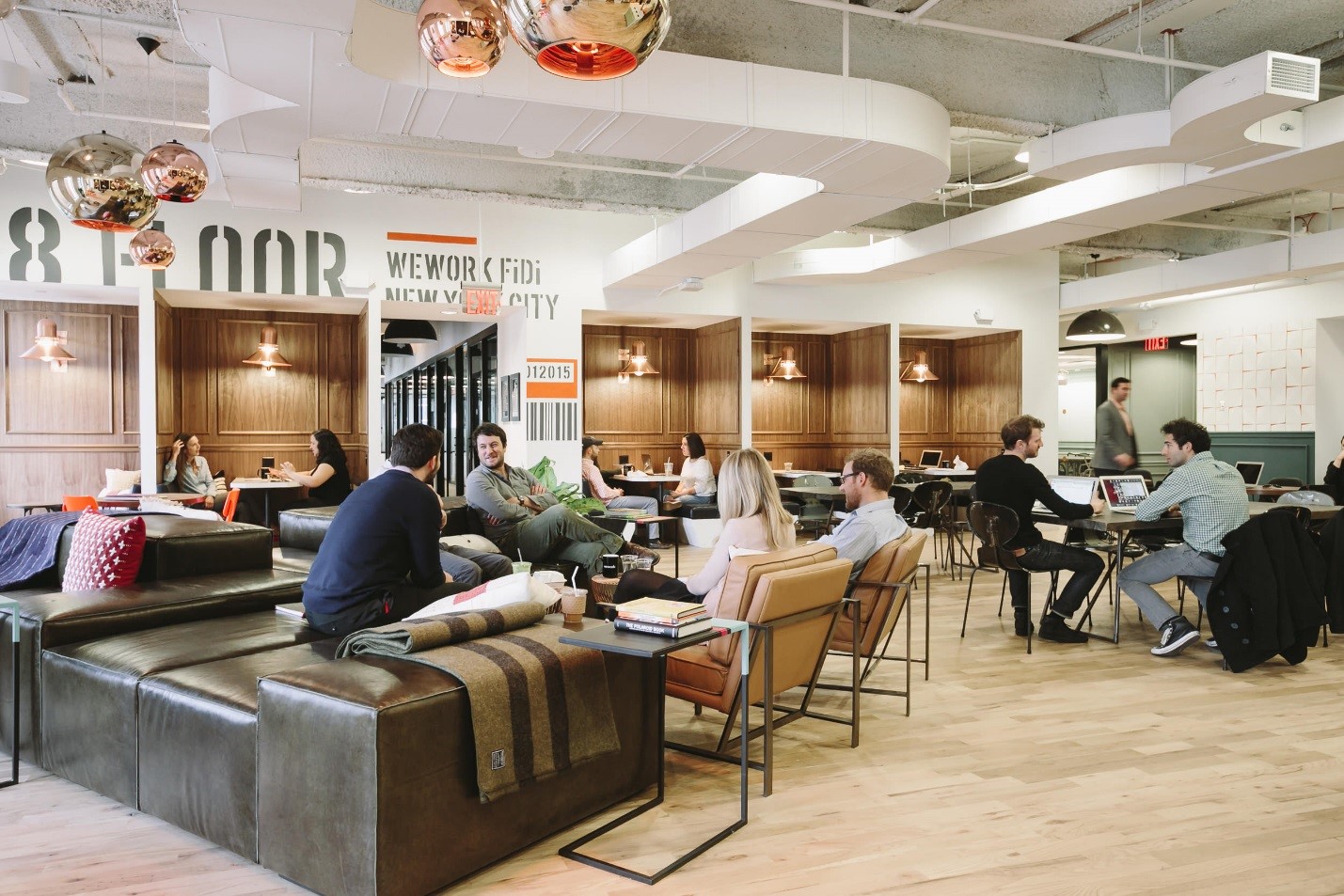 News is out that WeWork just filed its IPO paperwork. We can expect the IPO to happen within the next few months. But as I’ve said before, context is everything when it comes to IPO investing. We must understand the valuation… what’s happening inside the company… and if there are any red flags.

WeWork has been loved in the venture capital (VC) world. It’s raised over $10 billion in VC funding since its founding in 2010.

As a result, WeWork is reportedly worth $47 billion today. That’s an extraordinary valuation… especially since WeWork is not a tech company. All it does is lease office space and create a nice “atmosphere” for its clients.

For perspective, WeWork generated $1.8 billion in revenue last year… And it managed to lose $1.9 billion.

That places its enterprise value-to-sales (EV/sales) valuation at 26. That’s a ridiculously high valuation even for a profitable company… It makes no sense for a company that is losing more money than it makes.

So WeWork’s valuation alone tells you that investing in its IPO is a guaranteed way to lose your money. But it gets worse…

WeWork CEO Adam Neumann has been unloading his own stock in the company since 2014. He has now sold more than $700 million worth of WeWork stock.

It would be one thing if Neumann sold a mere $10 million worth of stock to buy a new house… and perhaps a vacation home and a couple of new cars… but $700 million? No way.

No smart executive is going to sell $700 million of stock if he knows that the company will double in value in the next year. Smart investors sell when they expect the value of something to drop.

So the valuation is awful. The company is bleeding money. The founder is cashing out…

And if that weren’t enough, it just came out that Neumann has been buying real estate himself ahead of opening WeWork offices in an area… And, of course, he leased that real estate to the new WeWork location at favorable terms. Talk about conflict of interest.

The bottom line is this… Steer clear of WeWork. It is guaranteed to lose investors a ton of money.

This is not an IPO recommendation that we’ll ever see in the pages of The Near Future Report or Exponential Tech Investor… I have a strong preference for making my subscribers money… not losing it.

For the first time ever, I am going to release my system for trading early stage technology companies. This trading system is the culmination of five years of research into secondary markets, IPOs, and the top VC firms.

Big money and big deals happen all the time in the world of early stage tech investing… But these deals have been reserved for the VCs and the insiders.

Never before has the public had access to the early stage investments capable of delivering massive returns in a short period of time… until now.

Tomorrow, I will pull back the curtain on the world of early stage tech. I am going to show you how to get in on early stage companies alongside the top VCs… And I’ll reveal my system for reaping triple-digit profits with these trades in a matter of months, not years.

And that’s not fluff… We backtested this system on every early stage tech company that fit my criteria over the last decade. The results show that triple-digit gains within months are the norm. Anything less is the exception.

So if you’ve enjoyed my other research products, please join me tomorrow evening. I will unveil my research on early stage tech… talk about my system… and end with a very special offer on my new trading product.

This will be my most exclusive research product, and subscriptions will be limited in number. I would prefer that my existing readers get those slots. That’s why I have asked my publisher to make you the most generous offer we have ever made.

If you have enjoyed and profited from my research thus far, I promise this new venture will be well worth your time. You can reserve your spot for the event right here.